It was difficult to sleep last night as the rain pelted the roof and poured through the skylight. The odd emergency siren sounded in the distance but other than that there was no indication of the turmoil going on in the streets of Calgary. Two months worth of rain has fallen in the last 24 hours. Add that to the already high spring river run off and you get the most disastrous flood seen in Calgary and surrounding areas for at least a hundred years. They call this a ‘Hundred Year Flood Event’ but I remember the flooding back in 2005 also being called a Hundred Year Flood Event. Back then we gathered on high ground to watch Fish Creek swell and grind against its banks, churning up soil and debris and hurling trees and anything in its path down river. The clean up from that flood event took years and some of the effects of that flood were still evident up until last week. The magnitude of this current flood is beyond anything that happened in 2005. The water flow down the Bow River was measured then at 250 cubic meters/minute and now we are getting estimates of river flows in excess of 800 cubic meters/minute.

As of this morning the Rivers (yes we have two) have crested. At their maximum heights, water was spilling over the Glenmore Dam. Many of our major roads through the city have been shut down, the Saddledome (home to our NHL team, Calgary Flames) is flooded up to the 14th row of seating and they have moved almost all the animals from the Calgary Zoo.  The photo below comes courtesy of Michelle Zimmer and is an aerial shot of St. George’s Island where the Calgary Zoo is located. I can’t even begin to imagine the panic those animals are in as they are unable to use their natural escape defense. 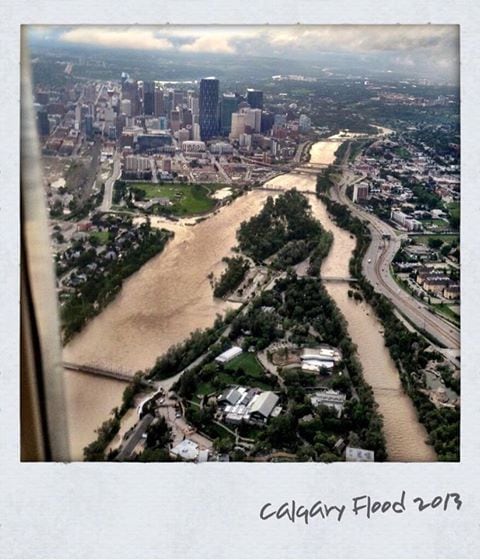 As of this morning, about 75,000 people from over 25 communities have been evacuated. The amazing thing is how our city has pulled together. Of those 75,000 it have been reported that only about 1,500 have been moved to the emergency shelters. That means the rest have been able to find shelter with family and friends. To shelter someone in their time of need is a huge undertaking and an amazing act of selflessness. These people are tired, they are panicked, and they are afraid of losing all they have worked hard for but they are safe.

The tireless work of our emergency services has been impressive. This flood hit hard and fast and within hours they were set up to handle evacuations and road closures. Some have had little or no sleep for the past 24 hours. I think they are amazing. Shout out to the Calgary Emergency Services! 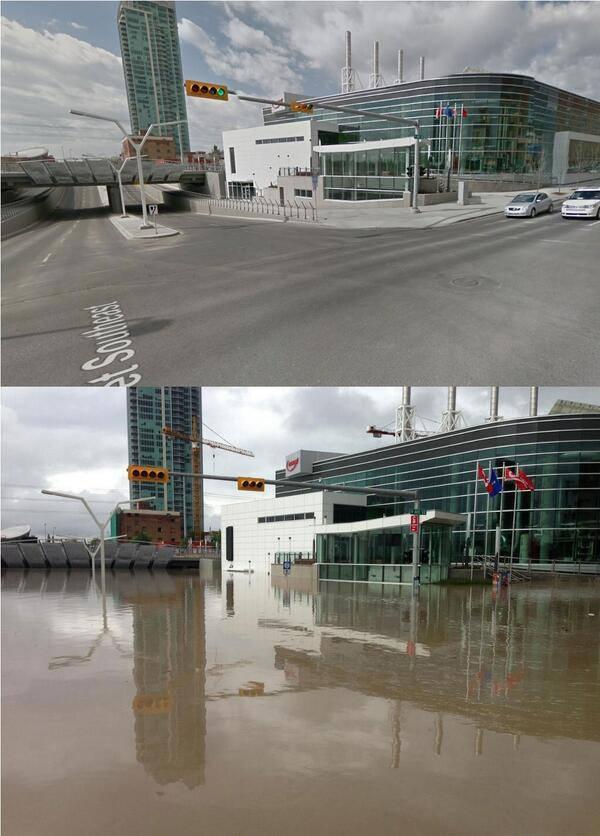 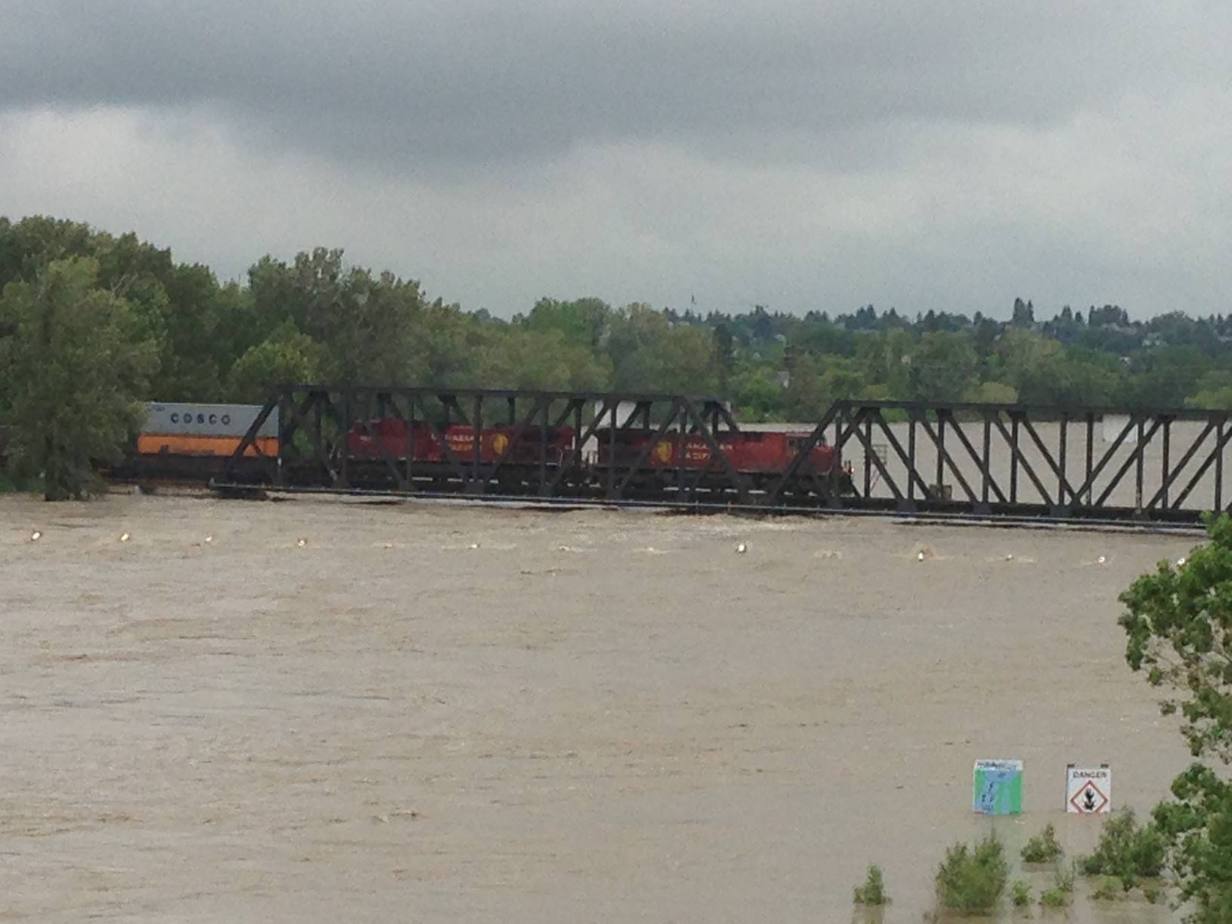 All major events have been officially cancelled for the foreseeable future. The world famous Calgary Stampede is two weeks away but is still a go even though the grounds are underwater. Calgarians are not the sort of people to give up.  This is the grandstand area where they hold the chuckwagon races and several concerts. I have heard many of the concerts booked for Stampede have been cancelled. 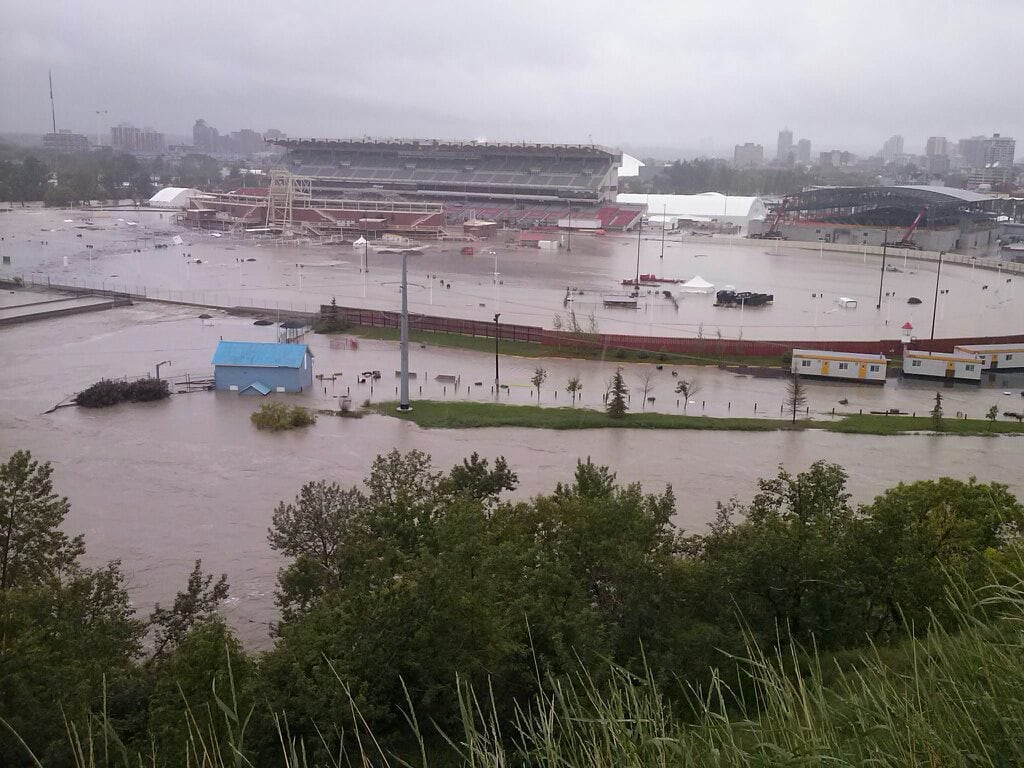 At this point it is still raining hard and the forecast is for 40 mm more rain. Though there was a temporary peak in the flooding there is a concern that the continued precipitation will intensify the situation. My heart goes out to the residents of Canmore, Bragg Creek, Okotoks, High River and Black Diamond. I’m also thinking of my home province, Saskatchwan because they are more than likely going to have to deal with this water influx as well.

Our kids stayed home from school today and I’m glad to have them safe and dry under our roof. We are lucky to have bought a house so far from the river and with close access to facilities. We have plenty of food, power, and water.  I am definitely counting our blessings and thinking of those who have lost so much.

Edit: I have pulled these photos off the internet and tried to give credit where I could find who I believed to be the original photographer. the last photo was taken by a friend of mine, Lory French.

A Potion To Fend Off A Chill