A Visit to Ayden Kitchen and Bar

We had a lovely (but cold!) white Christmas back home in Saskatchewan but eventually we knew the fun had to end. We broke up our drive back to Calgary a bit by visiting some friends in Saskatoon and I just couldn’t pass up the opportunity to visit the newly opened Ayden Kitchen and Bar. Owned by season one Top Chef Canada winner and home grown chef, Dale Mackay, Ayden Kitchen and Bar is a top notch eatery in downtown Saskatoon. It has a really cozy, but eclectic and electric feel to it and I felt ‘home’ as soon as I snagged my seat by the bar. I knew that I was going to start the evening with one of Christopher Cho’s cocktails served in one of those swanky vintage crystal glasses. I thought it an odd coincidence that I had just come from my parent’s house where they still use the exact same crystal pattern and have since their wedding day. When I asked later about the crystal I was told they actually scout out the crystal at garage sales and second hand stores. Talk about dedication!

I ordered a Clover Club which contained Beefeater gin, lemon and raspberry juice. It was a nice and frothy ‘girl drink’ thanks to the top layer of frothy egg whites. I didn’t get a picture of hubby’s drink but he had ‘The Last Word’. It was a very green drink with gin, chartreuse, lime, and another liqueur which we can’t remember. Must have been good! 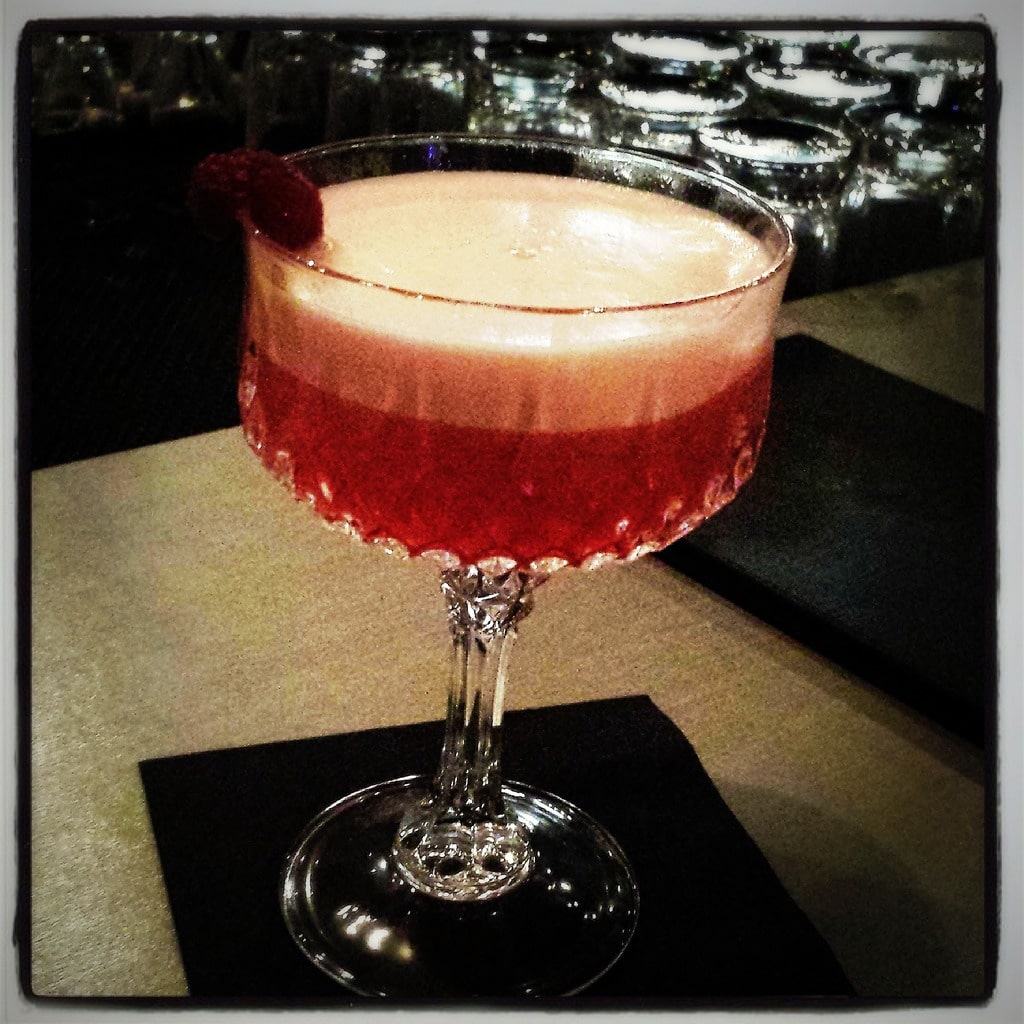 As we enjoyed our drinks we kept an eye on the flutter of activity within the busy restaurant. Servers went about their business while the open kitchen revealed a very experienced kitchen crew. We had been unable to secure a table but our seats at the end of the bar gave us a view of almost the entire restaurant and enabled us to chat with the friendly barkeeps.

After we had studied the menu for quite some time we began with the Tuna Tartare and the pan roasted Scallops. The tuna arrived within minutes of us ordering and I was super impressed with the efficiency of the kitchen right away. How smart is it to have a number of jars of tuna tartare already made up in the chiller? All you have to do is plate it up, garnish and add the nori crackers. The tuna was prepared in a way which was very reminiscent of the poke we’d eaten in Hawaii only the seasonings were different.  Instead of strong soy and sesame flavours, the tuna had a lighter Asian flavour with cilantro and a nice creamy aioli on top. It was delicious on the nori crackers.

We had demolished most of the tuna when we ran out of nori crackers but we were happy to just gobble up the tuna by the spoonful. This dish is a must order if you are ever fortunate enough to get a table at Ayden Kitchen and Bar. If you’re like us and are just hoping to get a table while passing through Saskatoon be forewarned that you may be out of luck. No worries though, when we arrived the bar area was virtually vacant and the seats are just as cozy.

I had chosen the next entree; the pan roasted scallops. They arrived in splendid glory, three perfectly seared scallops nestled among black quinoa, sprout leaves, granny smith apple, and spiced roasted carrot puree. Heaven! I’ve said before how I love the combination of seared scallops and sweet pea puree but the carrot puree was just as nice. 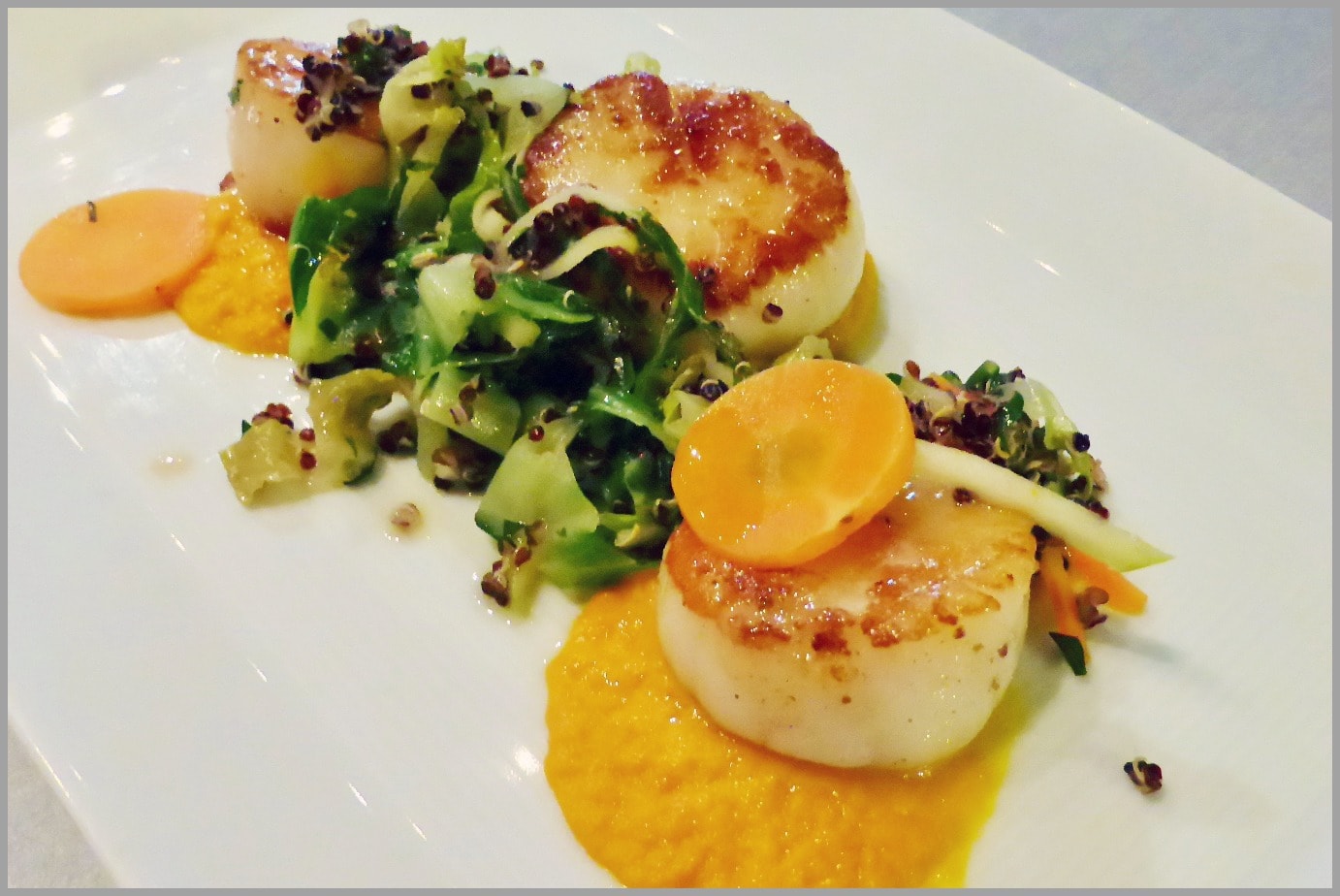 Though I was salivating at the thought of trying every main on the menu I went with something I had never, ever ordered in a restaurant before. The pork chop. Yeah, I could have had a rib eye or Steelhead trout (like hubby) but I took a chance. This was when I learned the true colours of this restaurant and the mad skills of the kitchen crew, in particular head chef Nathan Guggenheimer. This skillet seared double thick pork chop was done to absolute perfection, meaning it was fully cooked but not over cooked. I don’t know how they do this voodoo kitchen magic but I was blown away. It was the most tender, juicy, amazing pork chop I’ve had in a long while, maybe ever. As if that weren’t enough this massive pork chop came with two accompaniments; an amazing apple and fennel salad, of which I could have eaten a whole bowl full and sautéed cabbage with mushrooms and bacon (yay more pork!). The cabbage was okay but I did find it a tad salty. 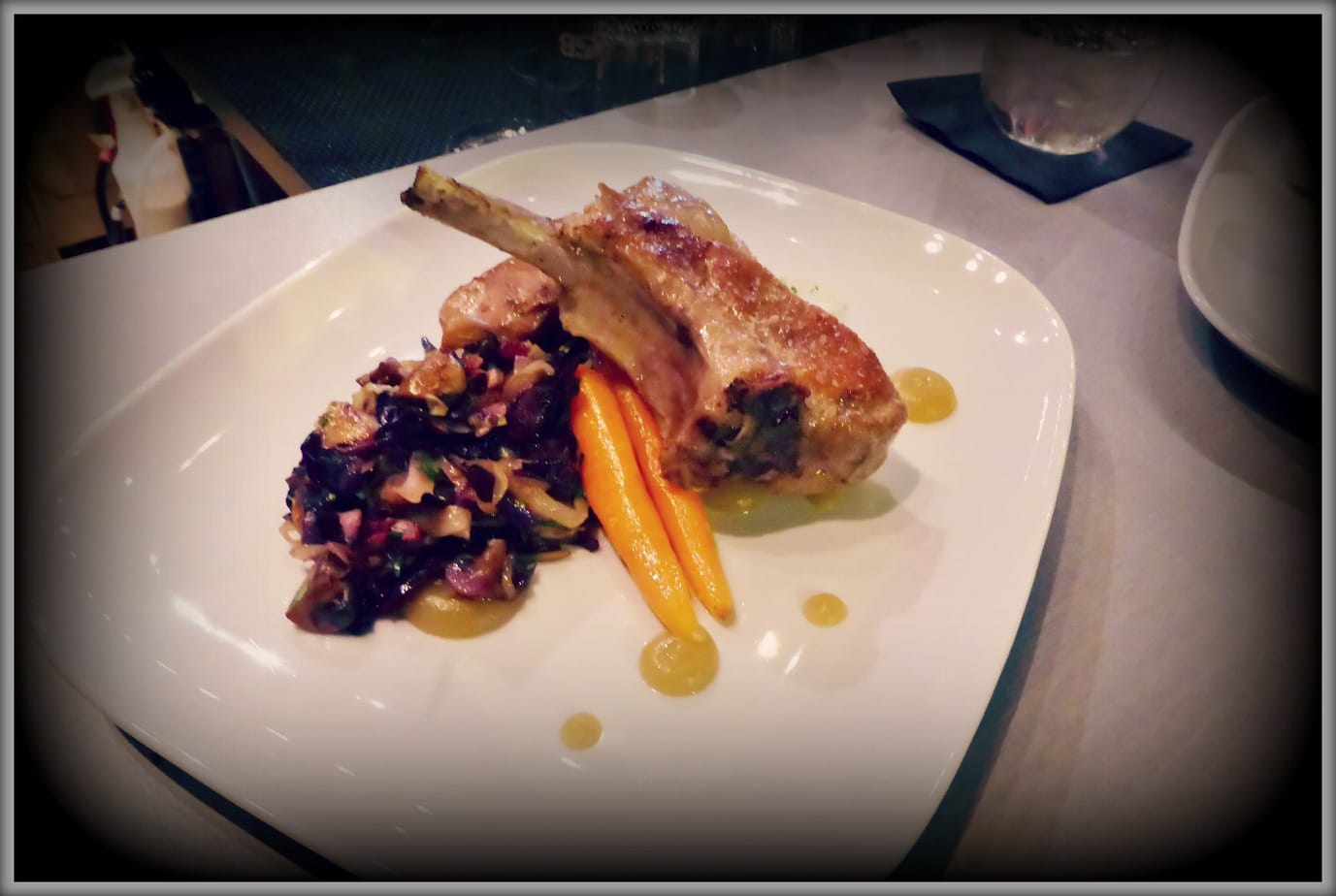 As mentioned, hubby went for the Steelhead trout. He was very impressed with the crispy outer layer and perfectly cooked fish though he did say the edges were a tad dry.  The fish sat  on top of a layer of tasty Saskatchewan lentils, cubes of sweet potato, house made chorizo, and brussel sprout leaves. He wasn’t sure what the green sauce was and I couldn’t really taste his dish as I was starting to get a cold and didn’t want to pass it on but thankfully I hadn’t lost my sense of taste when it came to my own food! 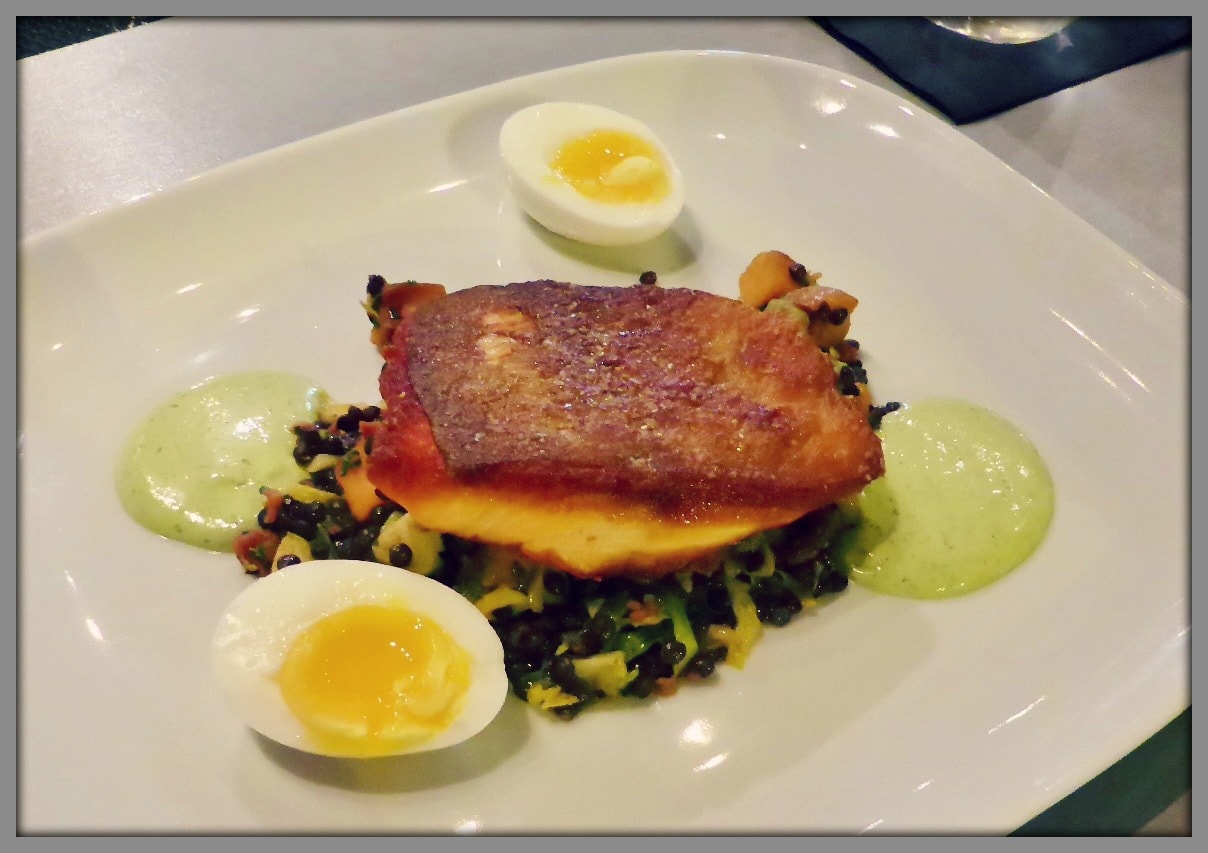 As luck would have it, our stomachs had been thoroughly stretched by Christmas festivities and we proclaimed ourselves ready and able for dessert. Besides, who knows when we’ll be back in the province? We went all out and ordered a dessert each. I had the Cardamom Panna Cotta topped with Grapefruite Marmalade while hubby went for the Chocolate Fondant with Peanut Ice Cream and Peanut Brittle. They were both top notch deserts, just the right bit of wiggle in my Panna Cotta and I loved the caradamom flavour. Hubby’s Fondant was appropriately gooey and he loved the ice cream. 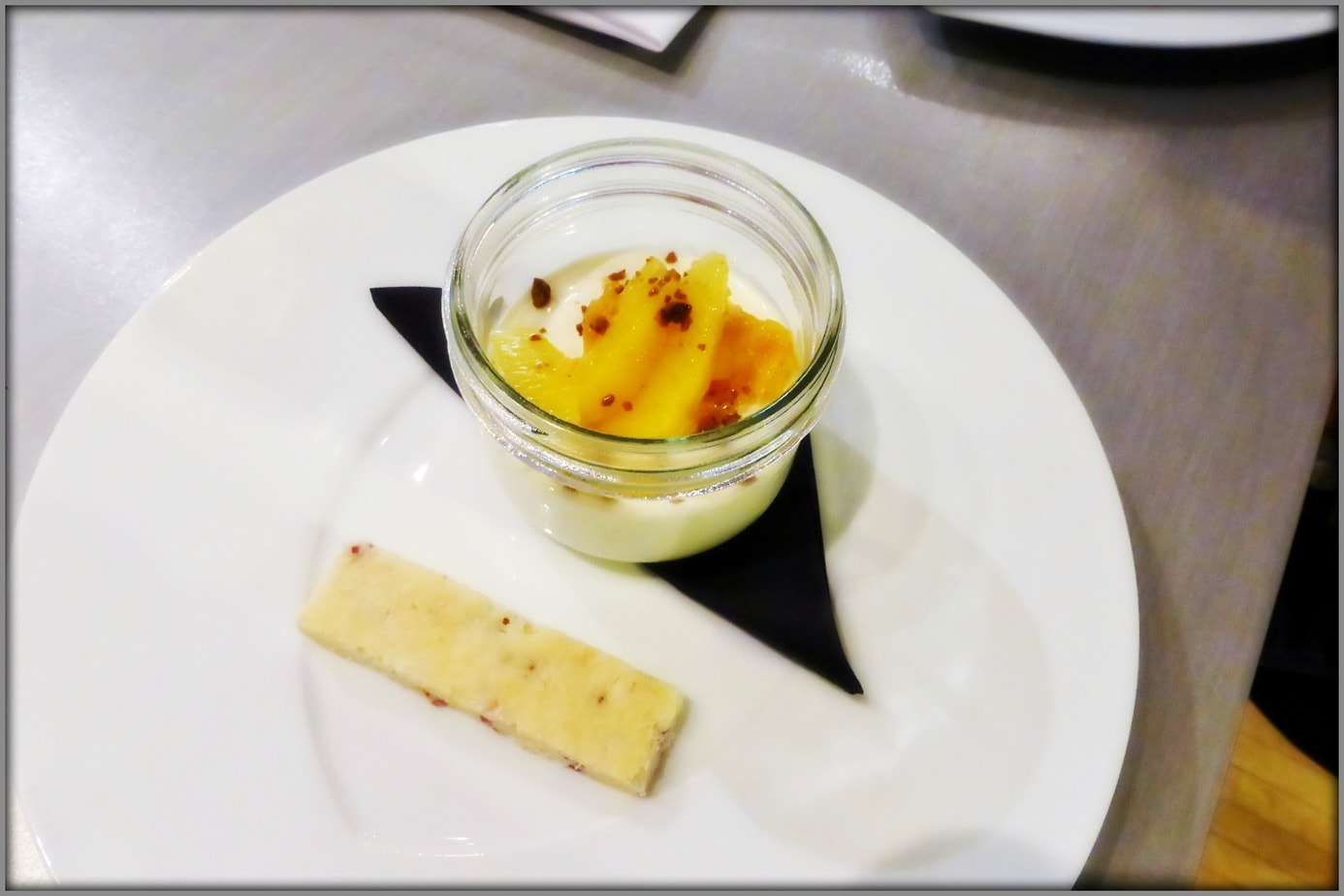 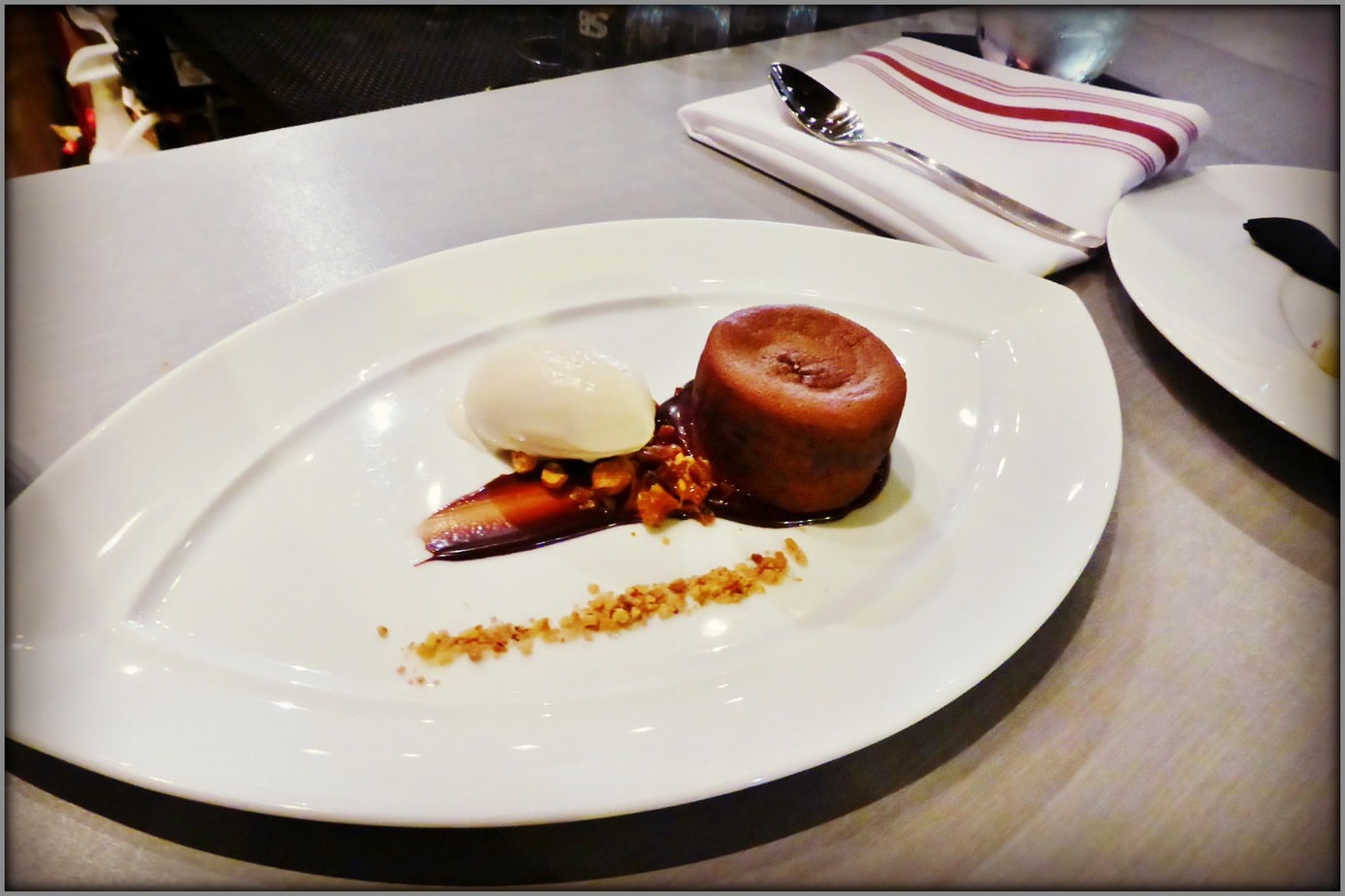 I’m so happy that Dale Mackay chose to open Ayden Kitchen and Bar in Saskatoon. I love that city and have many happy memories there including meeting  my hubby there when we were young university students. Next time we’re just passing through I’ll definitely book us a table in advance.