A huge part of being a parent is learning how to learn to let you children go. I’ve always felt that if you’ve done your job as a parent properly, you shouldn’t have anything to worry about once they start to become more independent. Now that our oldest son is 20 I realize that I couldn’t have been more wrong. Sure we’re very proud of the young man he’s become but even so, letting him go and live his own life has become an increasingly difficult thing for me to do.

Teaching him to drive and watching him pull out of the driveway for the first time by himself was one of those ‘heart in my throat’ kind of moments, as was the day he bought his first car. When I drove him to pick it up he told me he paid $1000 for it when really he only paid $500 and didn’t want me to worry about it! He drove that car a full year, spent more on insurance and a stereo than the car was worth, but he learned how to become a mechanic in that time. When he became a full time apprentice with a decent paycheque, it was time for him to buy his first truck. We went with him to the dealership to help him pick one of the used trucks out because buying a vehicle from a dealership has a lot more to it than just picking up a used car off of kijiji. We wanted to be there to make sure he was treated respectfully and given a fair deal.

Afterwards we went to the nearby  Pio Peruvian Rotisserie Chicken to celebrate.  The special that day was Parihuela, a very large bowl of seafood curry chowder thickened with yucca. Our son really enjoyed it, though it was very filling. 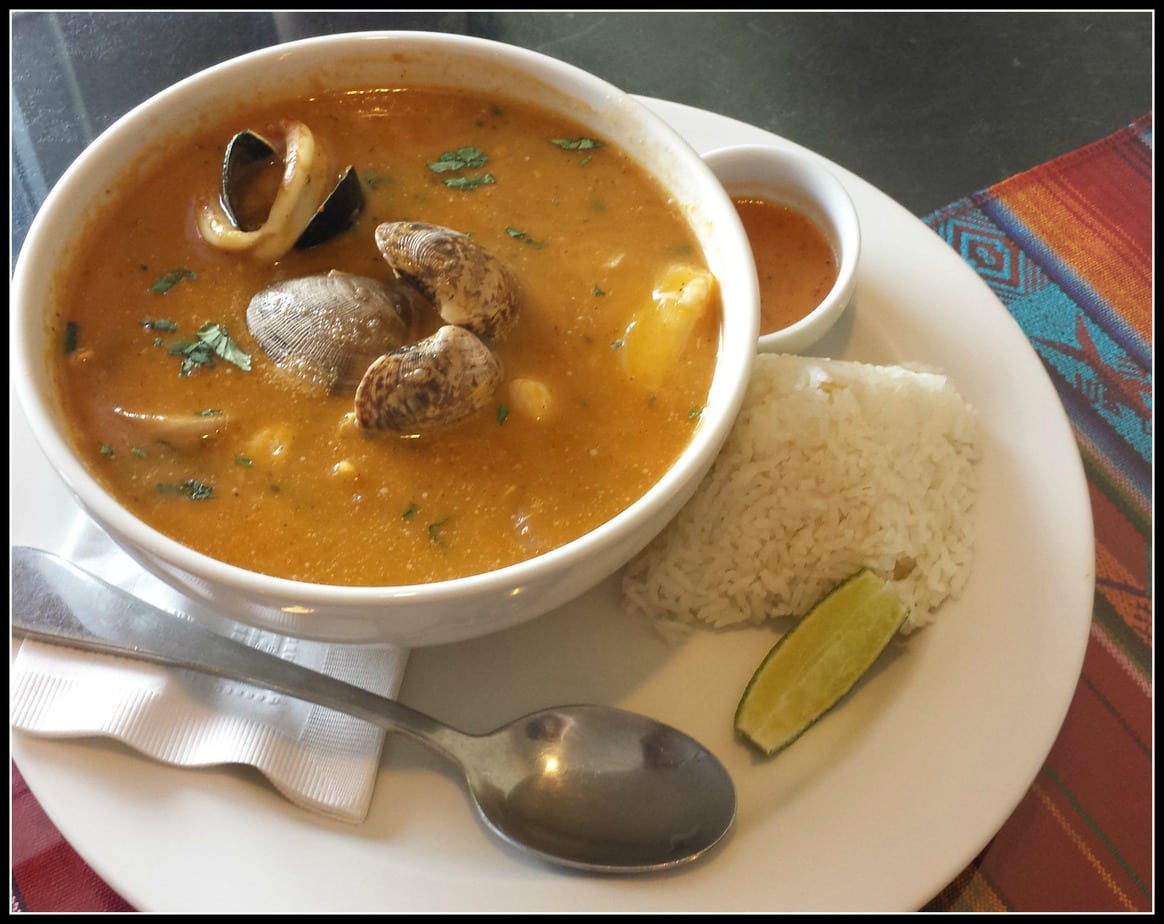 My hubby chose the Pio Con Salchiarroz because he likes the beef sausage and sunshine rice in the dish. It’s not often that he’s the reason I try new restauants, usually I’m the one dragging him out to eat. He found out about Pio through a co worker whose family owns the restaurant. One day they had catering from Pio during a lunch meeting and he’s been wanting to bring me here ever since. 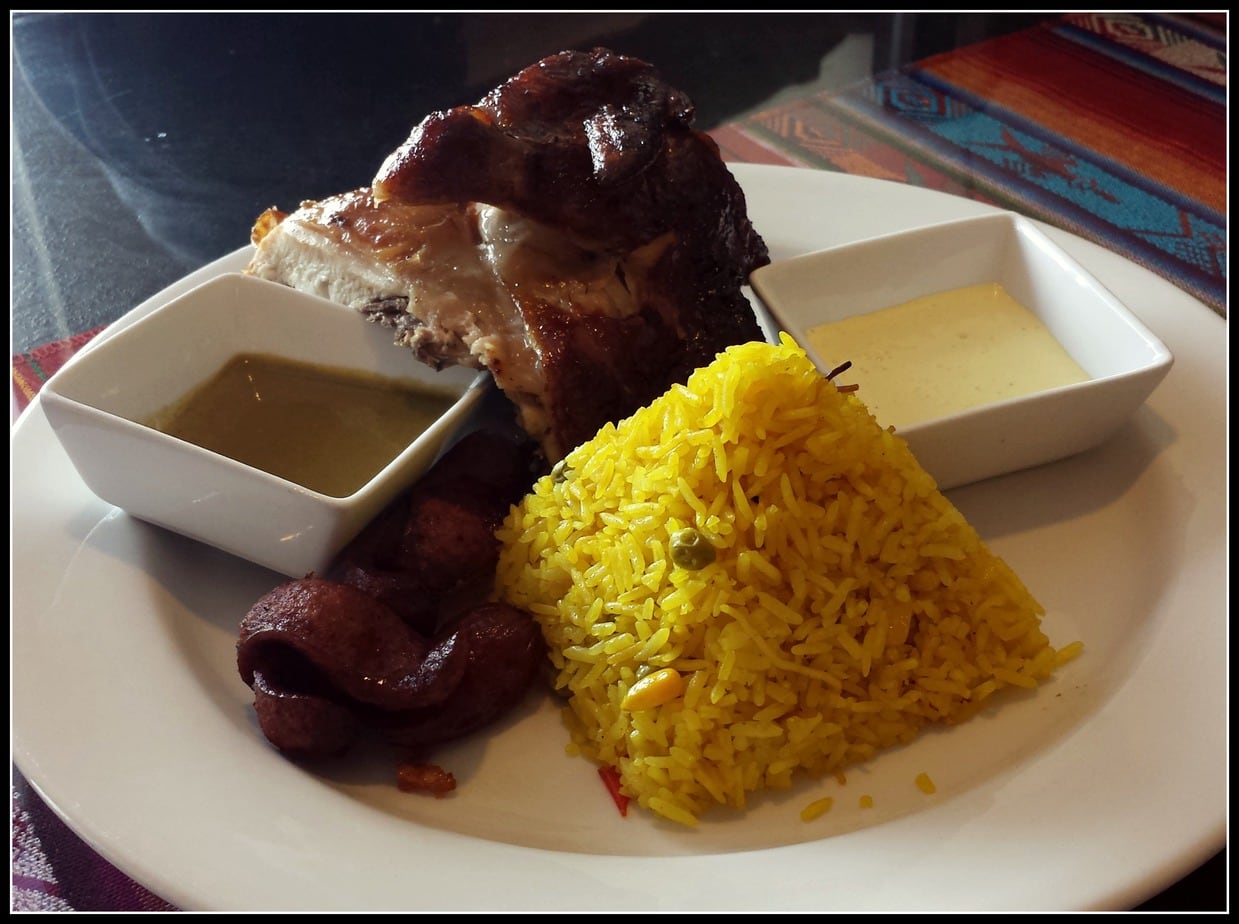 To be honest, the place does not look that special and has more of a fast food vibe to it due to the logo and website. It took me a while to get up to the North East to try it out. Since then I’ve actually visited four times and each time I have always ordered the same thing; Pio Con Quinoa. The food does come out of the kitchen quickly as if it were a fast food place but the flavour of the specially marinated chicken is something crave worthy. The accompanying sauces are also highly addictive as is the quinoa salad. 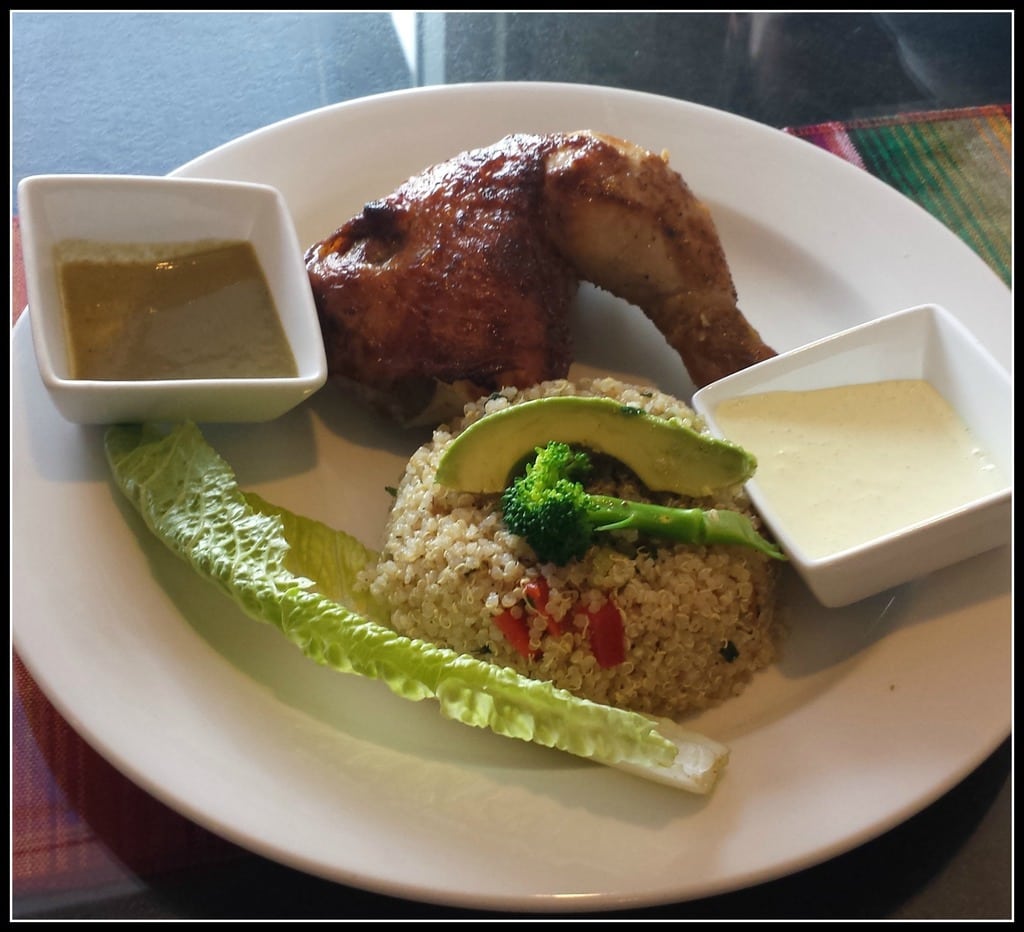 Since it was a celebratory dinner we had to order dessert. We couldn’t agree on one to share so we ordered three. After we enjoyed the Crema Volteada and the Picarones, we couldn’t finish the Alfajores so we got them boxed up to enjoy later at home. The Crema Volteada was delicious but the standout for me were the Picarones. Warm, chewy, and sweet potato doughnuts that are out of this world amazing. My only complaint is that I have to be with a group of people to enjoy them. If Pio were to make a half order of Picarones (only two in an order instead of four) I would probably order them every time I visited. 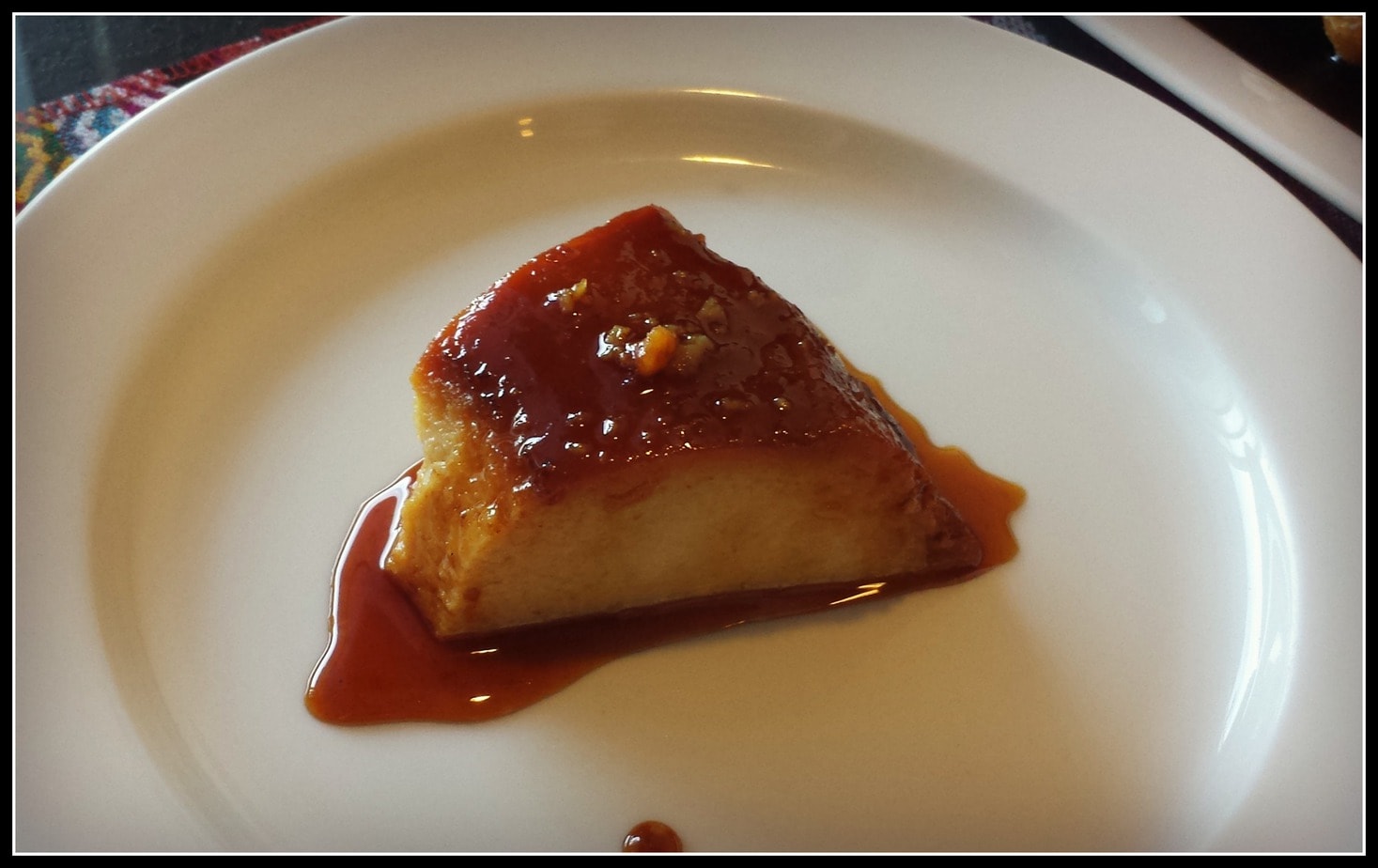 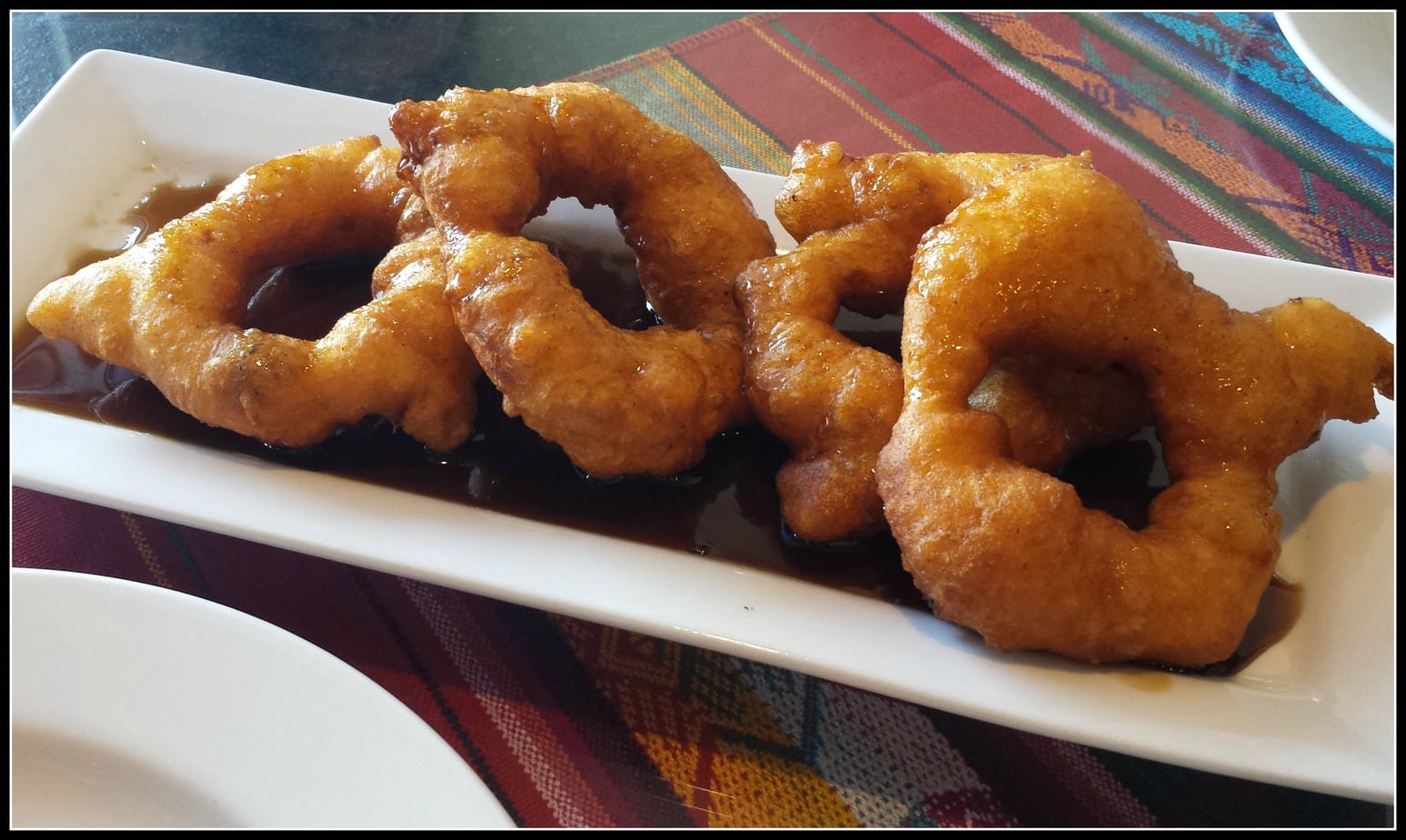 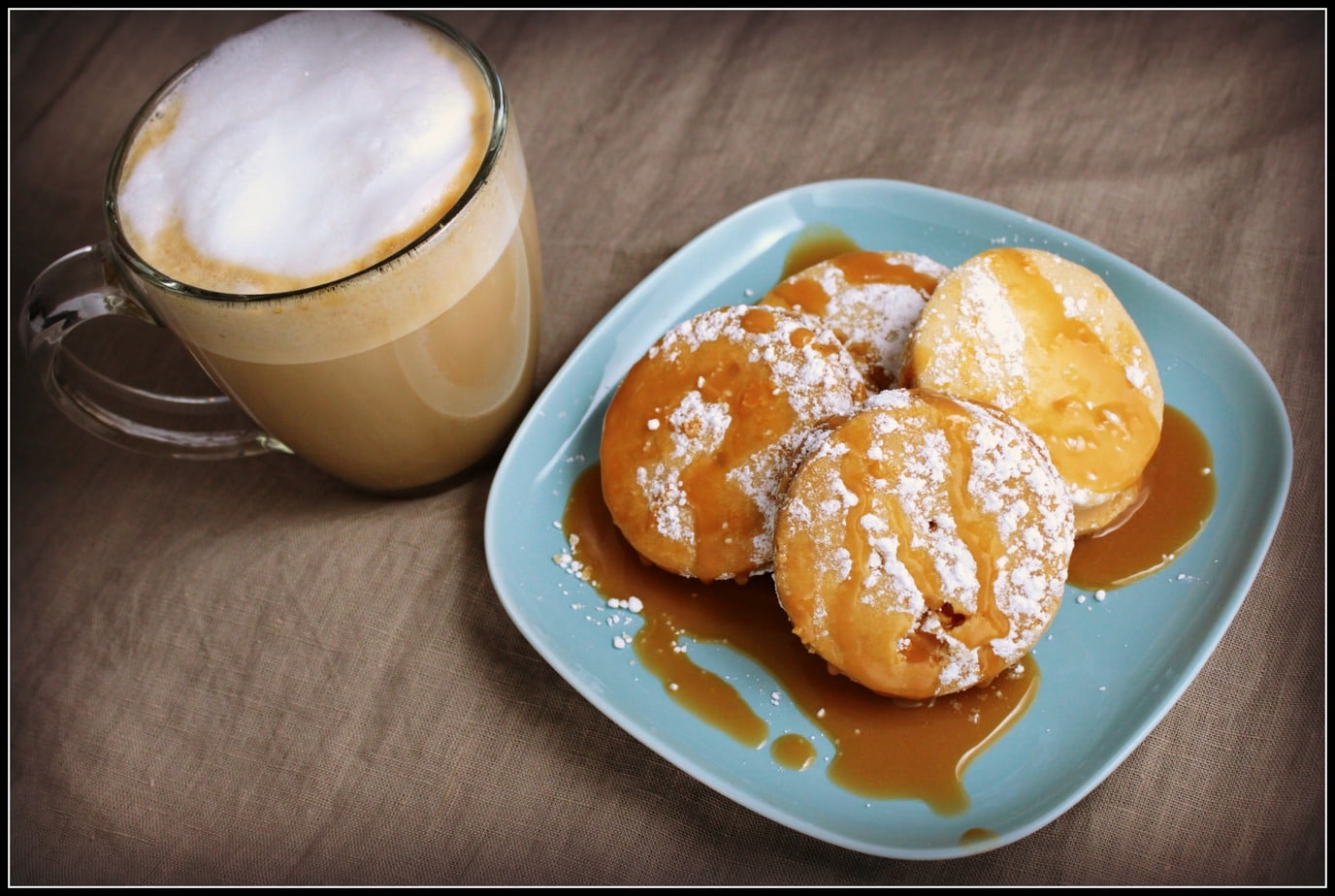 A Visit to Sea. Fish & Chips