At Market For Our Anniversary

17 years sure goes by fast. Literally. It seems like just yesterday hubby and I walked down that short little isle in front of all our rellies and friends. I don’t remember too much about that day except that I was dog tired at the end of it. We got married in a small town church on the tail end of harvest season at a very young age. Our first kid was then about two years old and just learning how to talk and we had him in our wedding party as the adorable ring bearer. This was back in the day before digital photos and social media was invented so we don’t have many photos of our special day except for the professional ones that were taken by a hired photographer. I know there were a few of my uncles that had decent cameras back then and I should really ask them for the negatives before that technology becomes obsolete forever.

Our anniversary weekend turned out to be super busy so we didn’t get out to celebrate until Labour Day Monday. That was okay though, hubby made the reservation at Market before we knew we were getting company and it was nice to end the long weekend on a calm, quiet note.  There were very few diners present when we walked in and I suspected most people had made the most of their weekends and were relaxing at home.

We were a little confused with the menus and not really sure which were appetizers and entrees but eventually the server came around for our drink order and explained everything to us first timers.

We started with drinks: 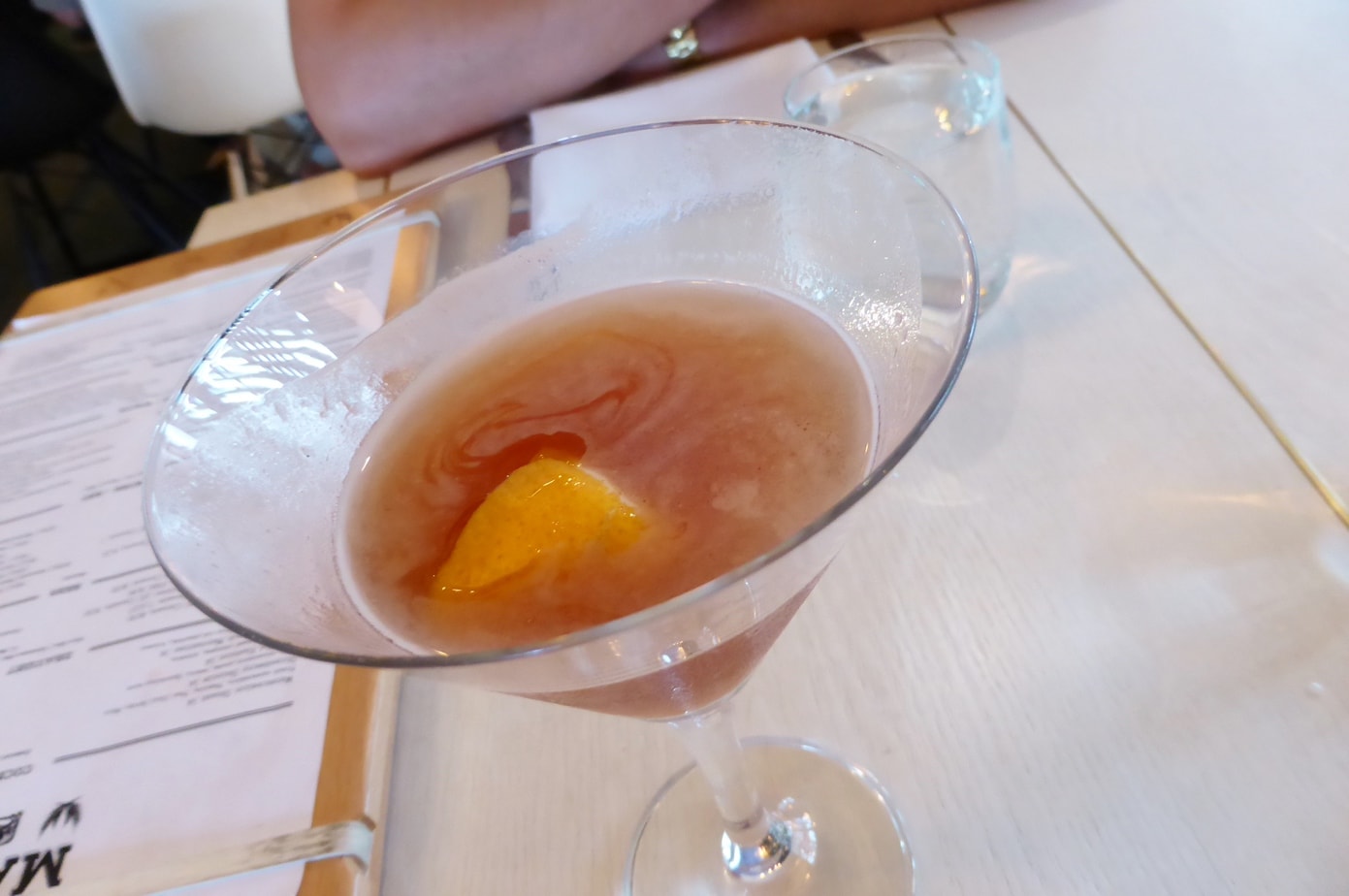 Mine was a Sous vide Peach Manhattan with Bourbon AND Vermouth. I’m afraid all I could really taste were the Bourbon and Vermouth. The cocktail was quite bitter and it definitely could have used more peach flavour.

Hubby had a Market 75. It reminded me of the Kir Royale aperitifs we had in France but with lemongrass, ginger and rum in addition to the sparkling wine. It was quite refreshing. 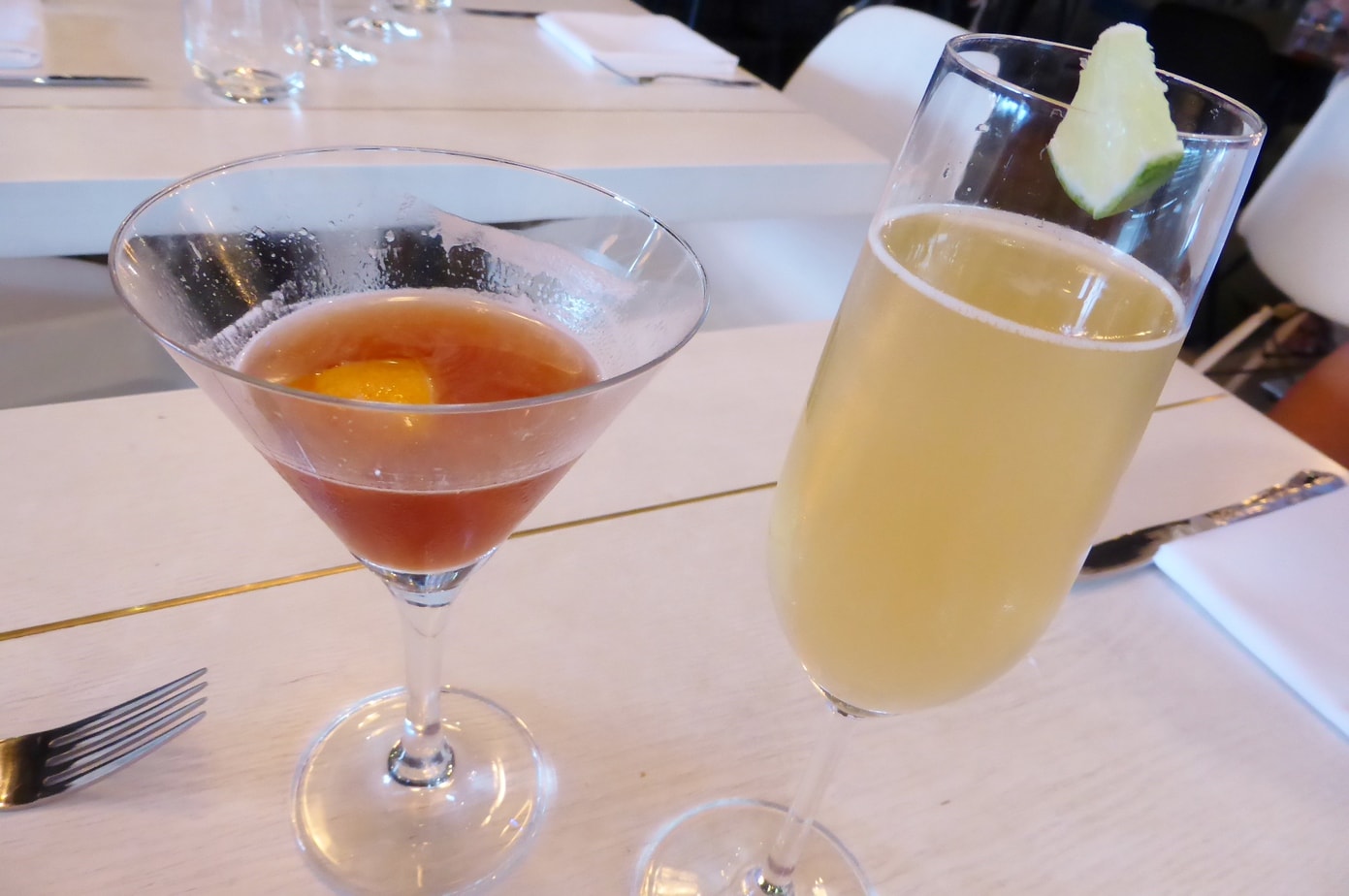 We decided to start our meal with the Tomato Tart. I found it to be quite rich and the pastry was not as flaky as it could have been. We loved the house made ricotta. 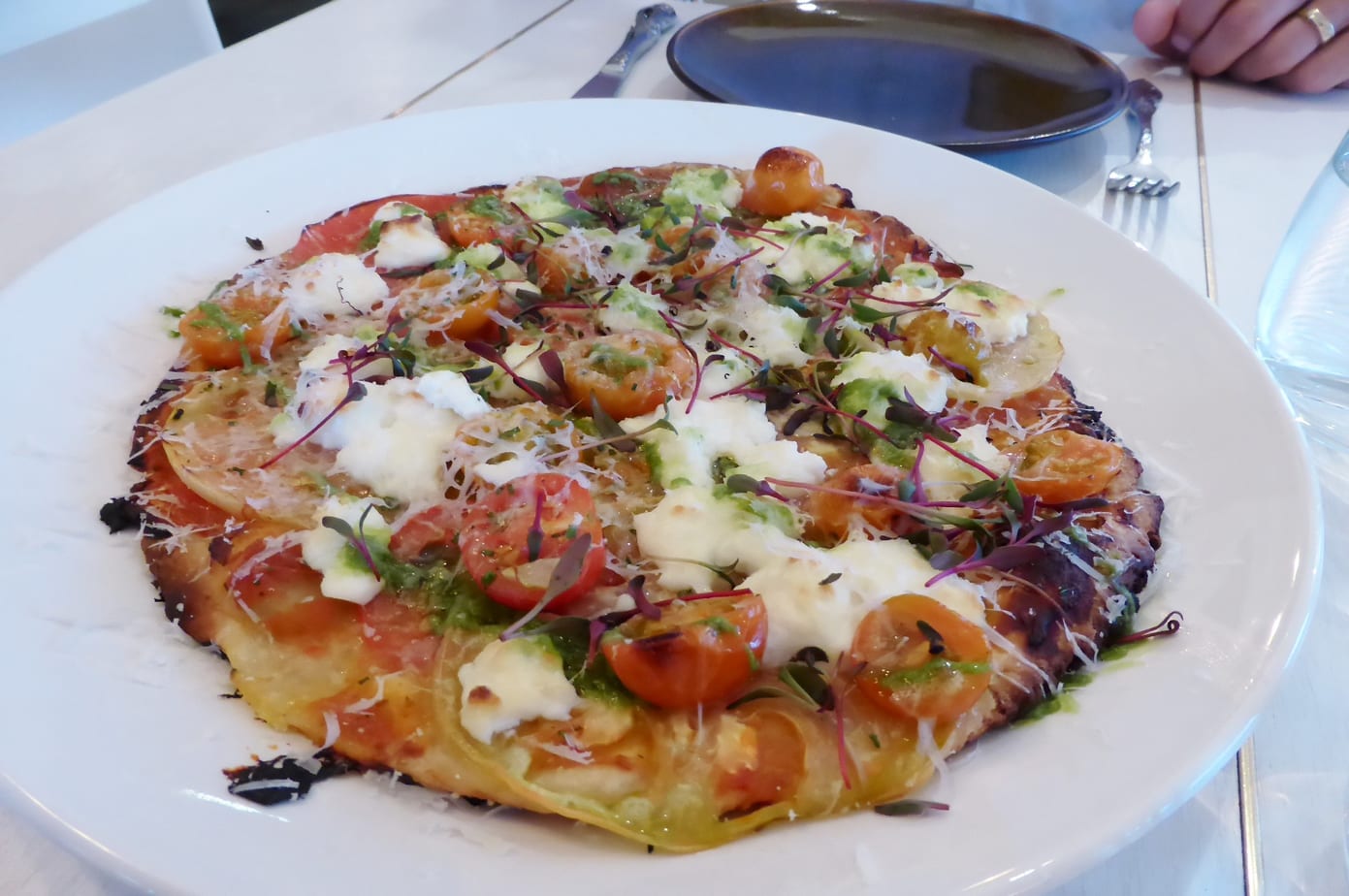 Our main courses were ordered and came out looking stunning though here it looks like I only received half a plate of food! The fish was cooked perfectly as was the ravioli. I was a bit concerned when I first looked at it as it was huge and quite thick but the pasta had a really nice texture and the kohlrabi filling was smooth as silk and very tasty. I thought it was quite nice to have the little specks of dried mint around the plate to eat with the pea puree. My favourite element on the plate were the king oyster mushrooms.  I had to do a double take because I thought they were cross hatched squid when I first saw them. 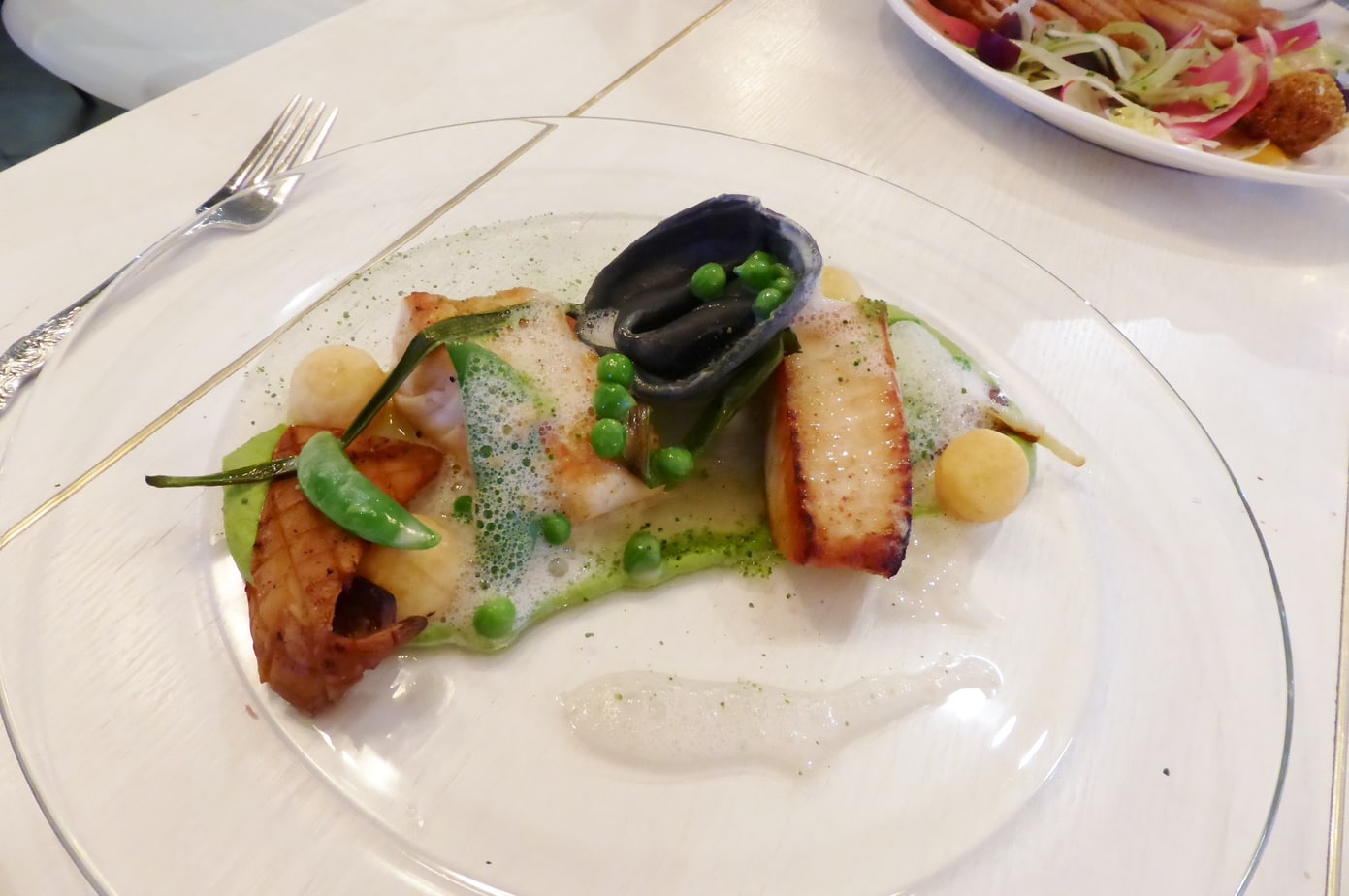 Hubby is getting into the habit of ordering duck breast if it is on the menu. He got quite a plateful of food! Besides the breast, the little duck confit croquettes were a nice addition to the dish. He enjoyed the celeriac puree and the pickled salad. 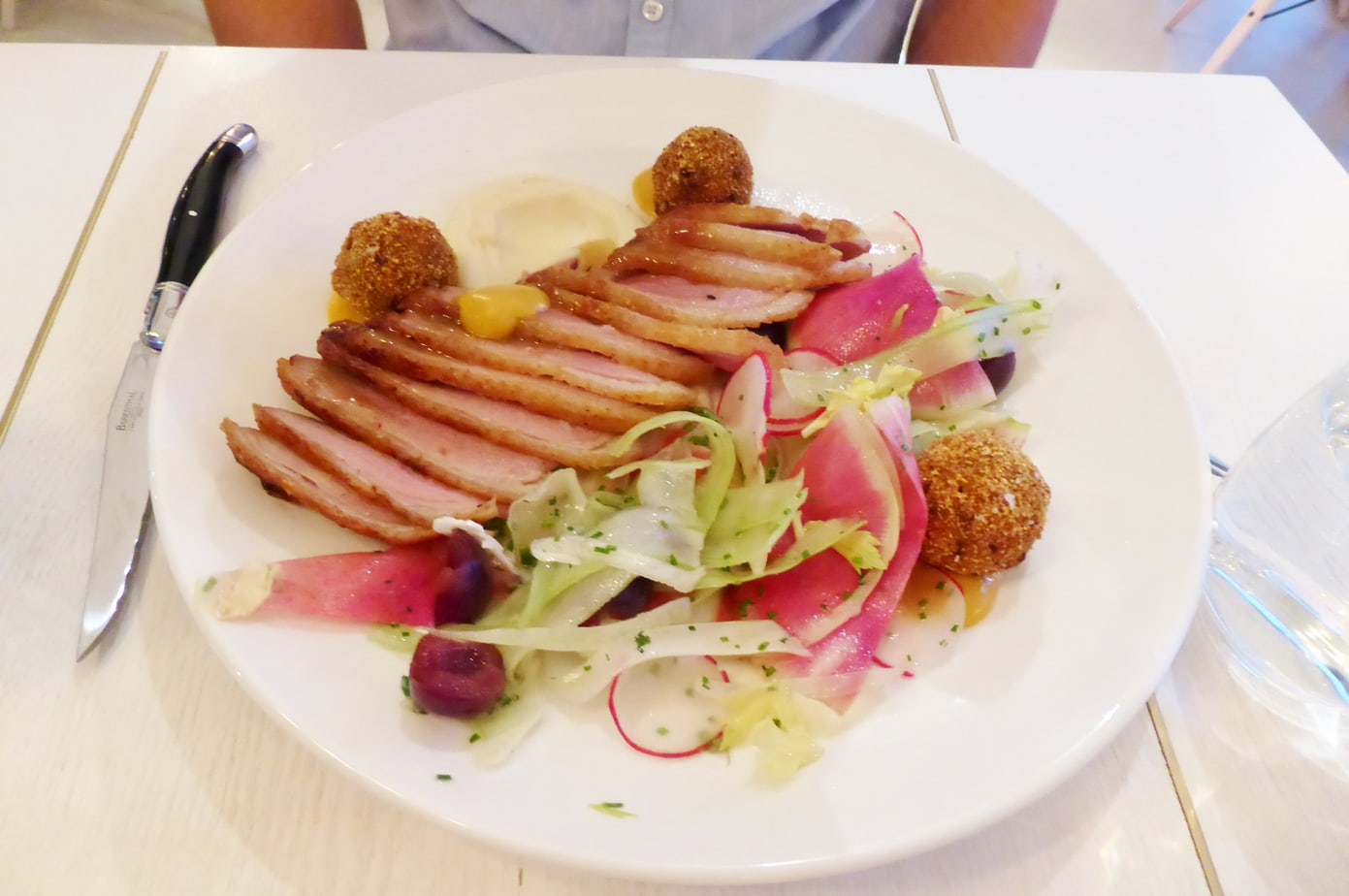 We found our server to be quite friendly and efficient. She kept our water glasses topped up nicely which is always a bonus.  We did have a look at the dessert menu but nothing really stood out to me and that is unusual because I’m usually a soft sell.  Maybe they need to work on the dessert menu a bit because we really would have ordered something if there had been anything on there that stood out for us. Afterwards, we walked up and down 17th looking for a place to have a sweet bite.

17 years and looking forward to many more…love you hubby!