Opening day for Black Pig Bistro in Bridgeland was last Wednesday. I wasn’t exactly planning to visit right on opening day but I’m very happy things just sort of worked out that way. Of course not planning to go out to eat resulted in me not having my camera so please enjoy these less than perfect cell phone pictures. You could say they leave some details up to the imagination!

Since we had to pick up our Calgary Expo wristbands at the Stampede grounds, I thought we could also venture a little farther north to Bridgeland for some sushi at Sushi Bar Zipang. As we were en route, we passed by the Black Pig Bistro. I realized it was not as full as I thought it would be and begged Hubby to stop. We decided to check in to see if one of those tables had our name on it. And as it turned out, one did!

On first glance we found that the Spanish themed menu was quite small. A limited menu for a newly opened restaurant is a good idea. It helps the new servers and kitchen staff to become accustomed to the kitchen operation during those first few weeks. It is also possible that because it’s a bistro, the focus is to be on the quality of a few menu items rather than spreading themselves thin over a lot of choice. Time will tell. The menu is also quite porcine in nature, which is no surprise and really not a problem for my family at all. My daughter does not have a large appetite so she entered in ‘food share’ negotiations with her brother who is 13 and who could probably eat a pig if you placed it in front of him. He is past the food share phase. I eventually had enough of the negotiations and told everyone just to order what they wanted. What kid number one wanted were those pork dog starters… 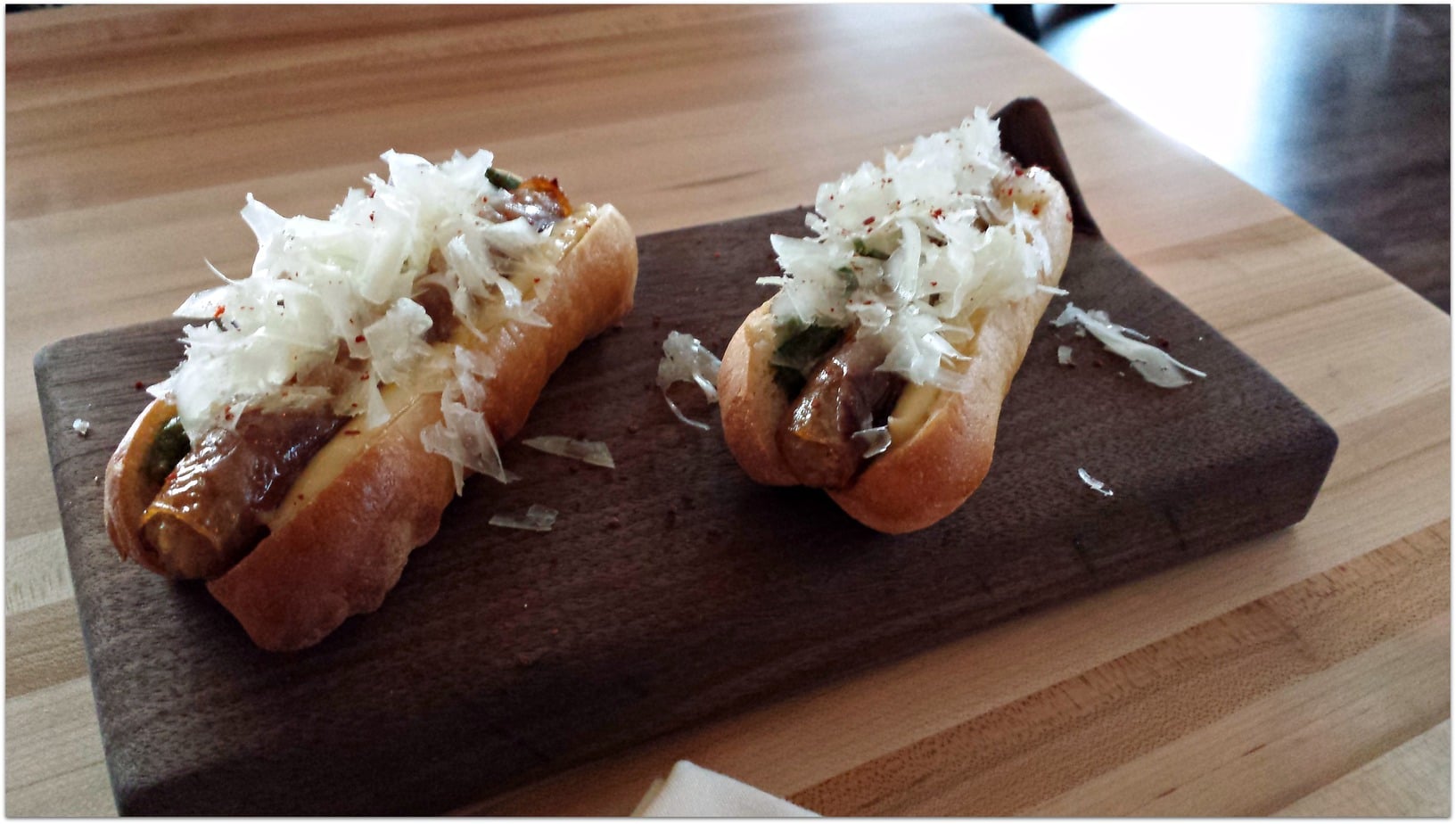 Would you believe they were so good he encouraged us all to have a bite? What a nice kid. I guess he isn’t past the sharing phase after all. Inside those adorable soft mini buns lay tiny pork hot dogs smothered in a delicious roasted garlic aioli (one of his favourite sauces!) and salsa verde. As if that weren’t enough, there was a generous shaving of  manchengo to top the whole thing off. These little dogs may be tiny but they pack a huge punch. They are sure to be a hit with the young and young at heart.

Keeping with their Spanish theme were these Salt Cod Tortellini. Admittedly I haven’t had much exposure to tapas, but I have had Salt Cod fritters which are very popular in tapas bars. I expect that these little tortellini were a play on the fritters, but it is awfully hard to compare the two. The pasta was nice and tender with a slight bite, and the filling was tasty but a bit too runny. The Piquillo pepper purée was nice and smooth. In fact it tasted very similar to many European red pepper spreads that I have tasted. I loved the contrast of the kale chips on top, which was both visual and oral. My daughter had an order of these starters as well as the Green Salad for her actual meal.  She enjoyed components of the salad, in particular the avocado dressing, green grapes, and mixed greens but she wasn’t a fan of frisée or the large amount of herbs. 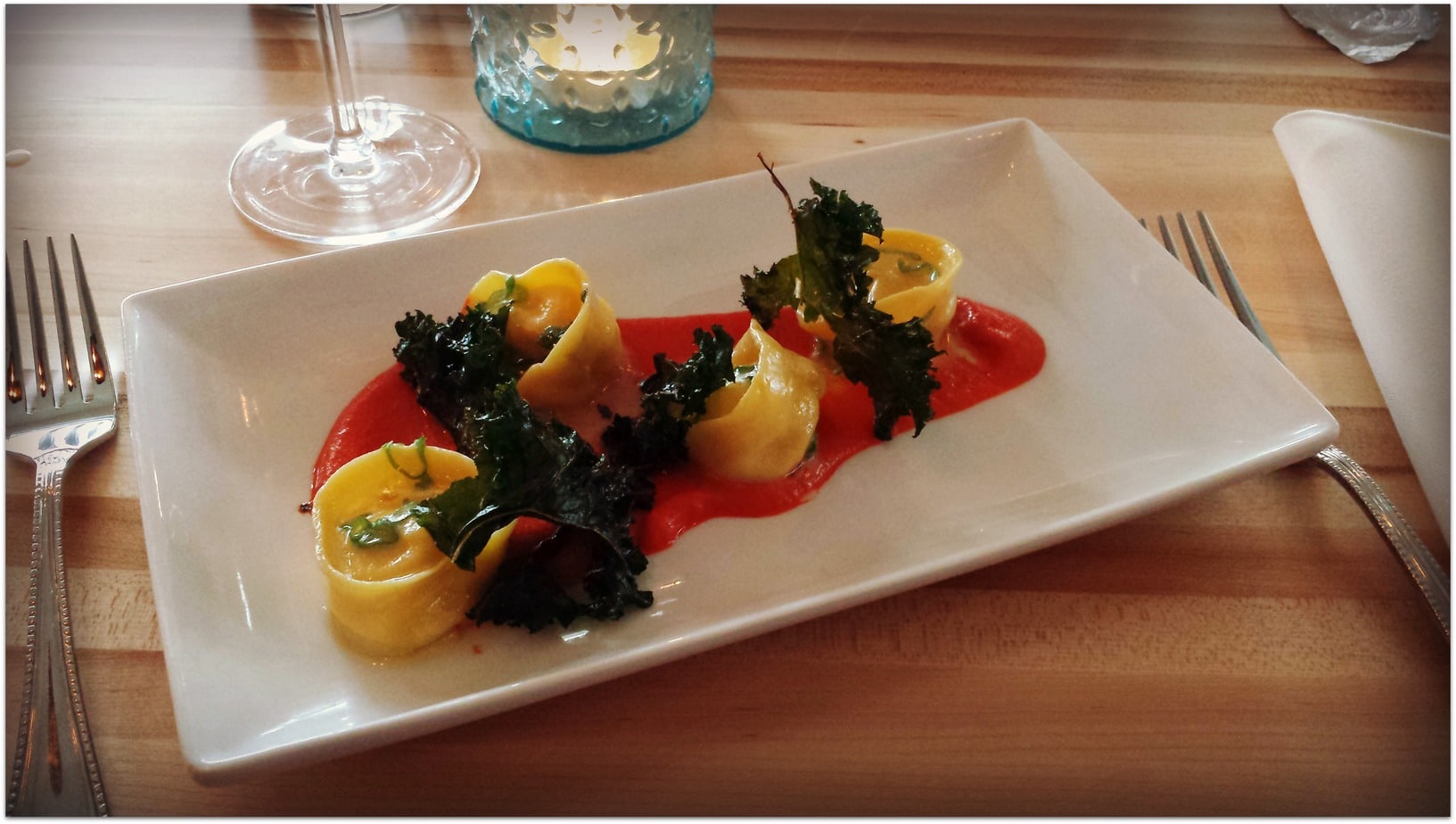 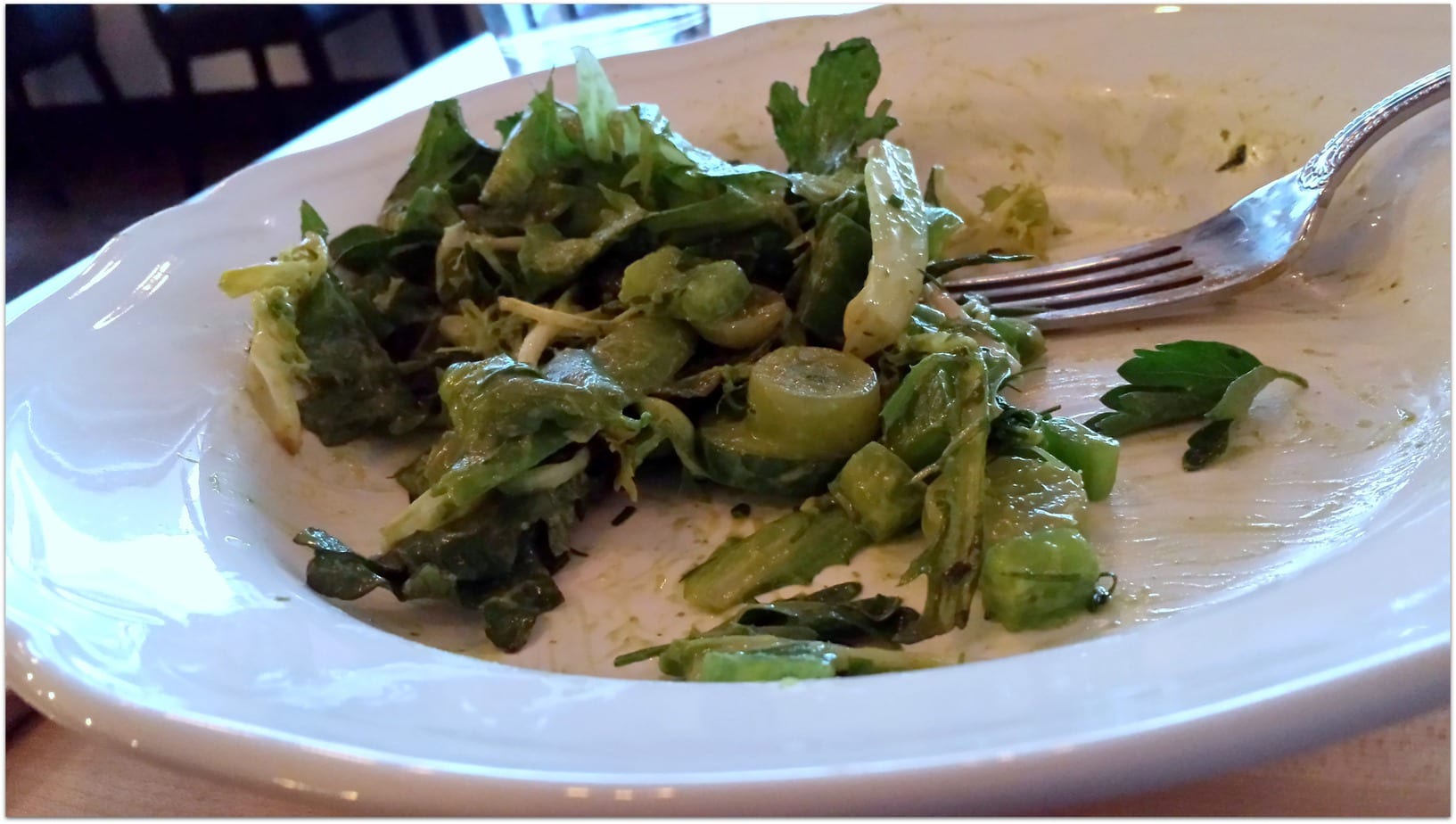 Hubby had little to say about me dragging him out to eat under false pretenses…he ordered a starter of Chicken Liver Parfait and didn’t have to share his at all…. 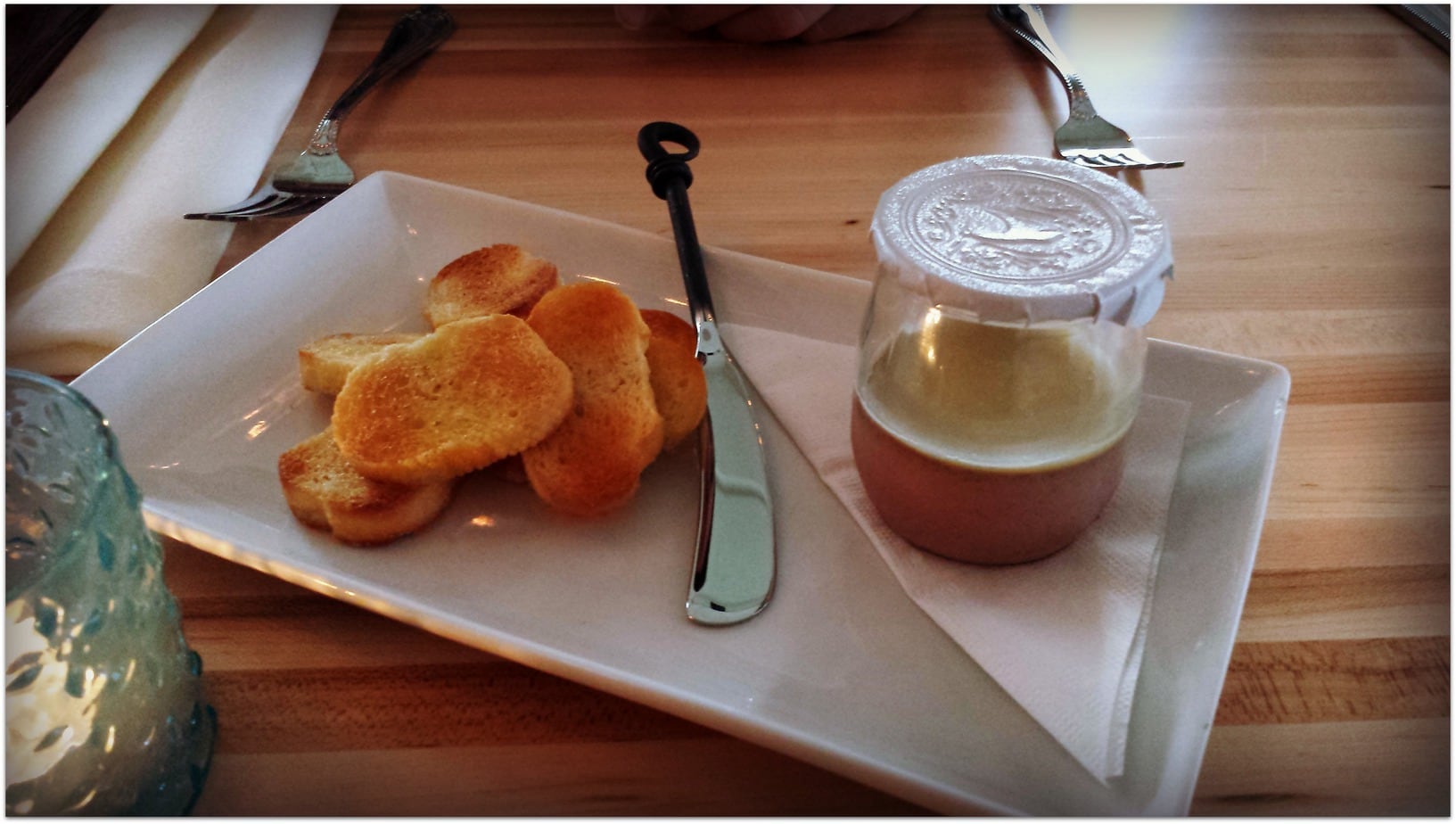 Hubby and I broke one of our main dining out rules and both got set on ordering the Beef Cheek Risotto. I still pause slightly when I see risotto on a menu as if I need to consider how I would feel if the dish was under or overcooked. Fortunately this risotto was spot on. Creamy with a bit of a bite of individuality, accompanied by a generous but not over the top amount of saffron. Both hubby and I panicked slightly as the dish was set down. We were both expecting the beef cheek on top of the dish but it was no where in sight! We located a piece with the first dip of our forks and I’ll admit that it was kind of like unearthing bits of buried meaty treasure. This dish was balanced but also quite rich so the grape tomatoes really added some needed acidity. 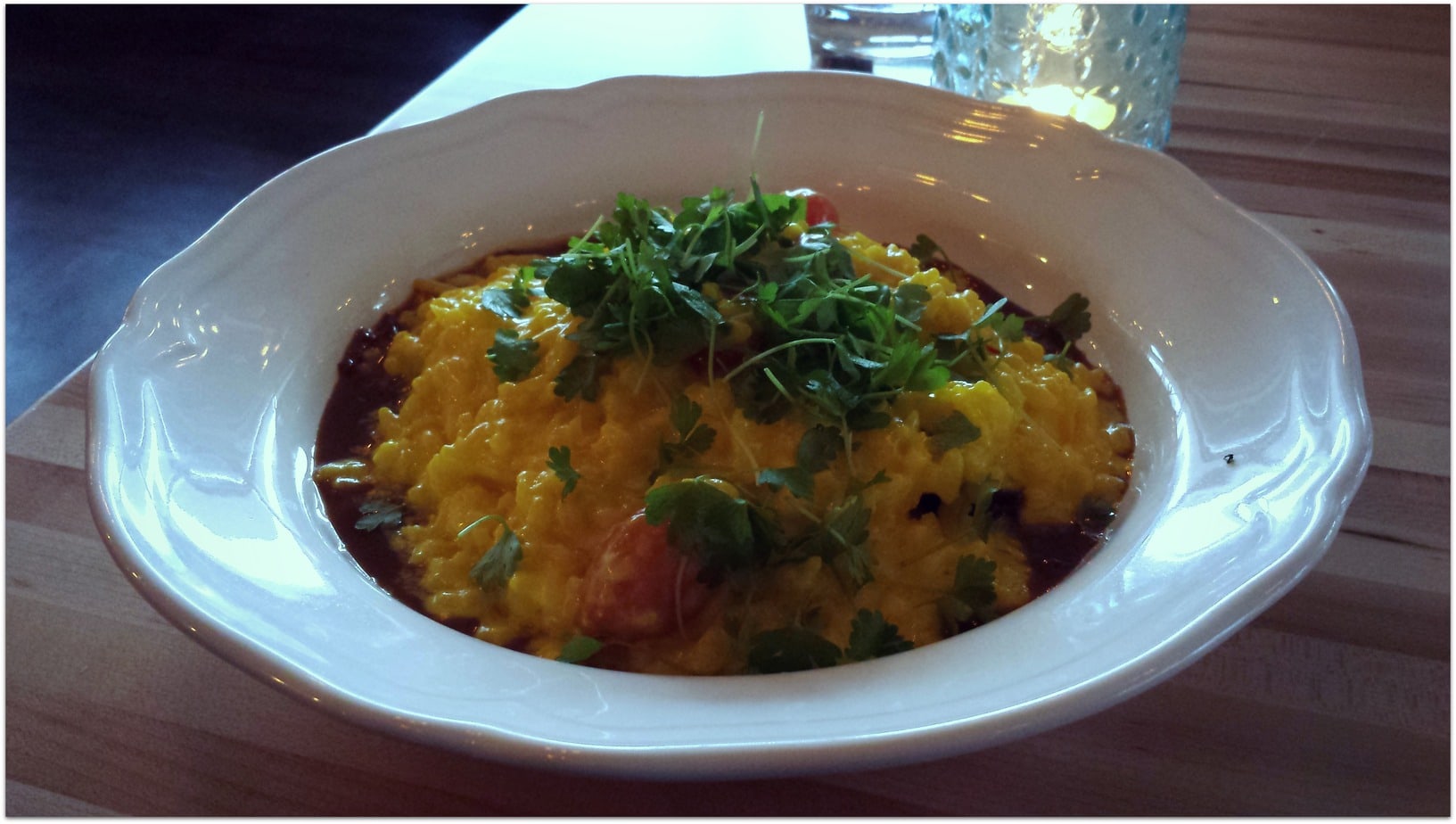 When we were first given our menus my eye was immediately drawn to this dish of Pork ‘n’ Beans but I had a preconceived notion of what the dish was going to be like, heavy and bean-y; not what I was looking forward to for dinner. When the plate arrived in front of kid number one I realized I couldn’t have been more wrong. This plate was EVERYTHING I was looking for and I regretted not ordering it. Of course, he had to rub it in by saying how good it was over and over again. While he is a good eater and has had his share of food experience at the age of 13, this dish really excited him. I haven’t seen him that excited for a long time. He loved everything about it; the porchetta, the light greens, the mixture of beans, and the really light vinaigrette. His only complaint? He wanted more of those really amazing broad beans. 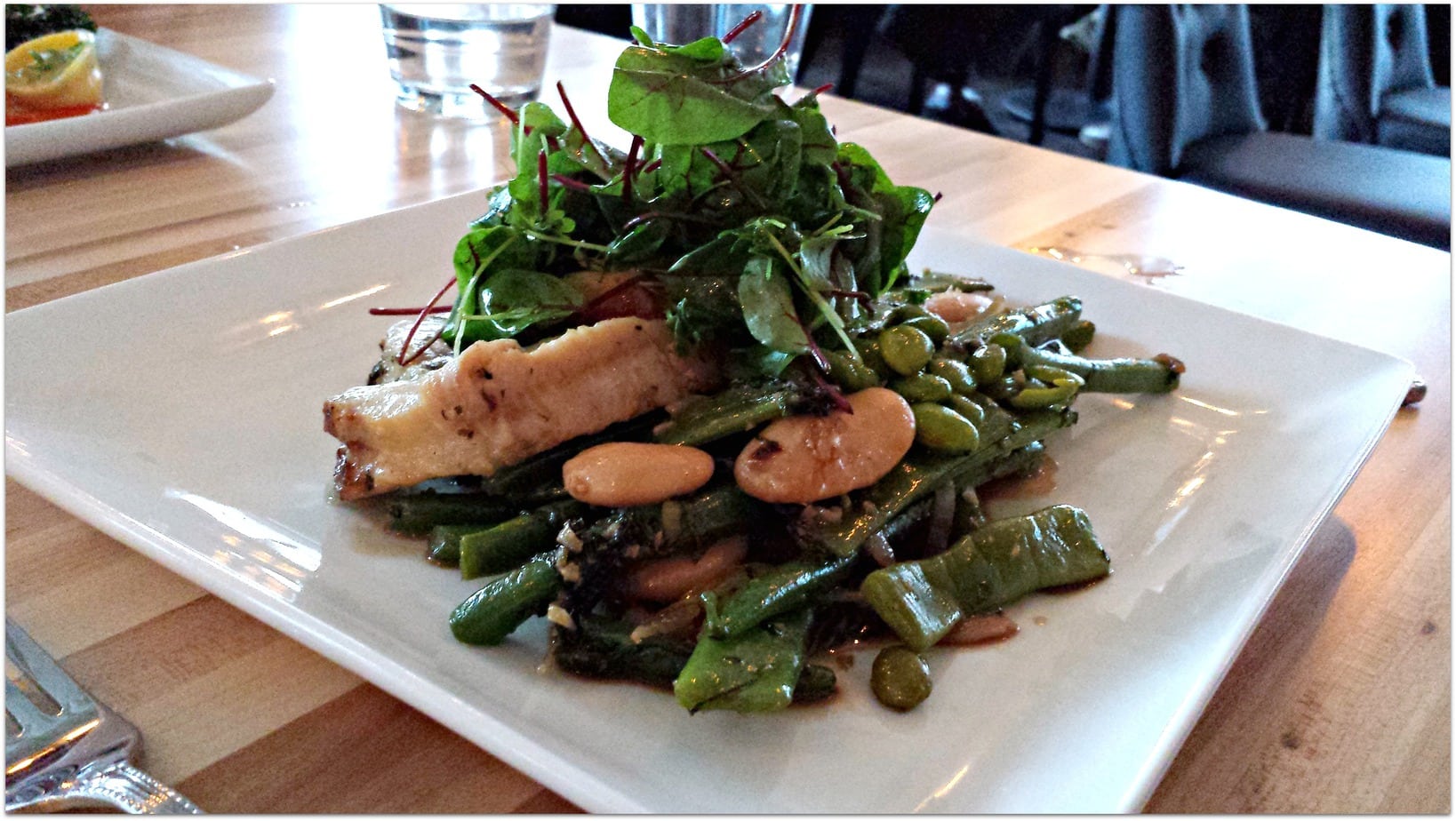 The Black Pig Bistro is more than a week old now and I’ve already heard others say some really great things about their experiences there. The restaurant has three owners;Denise and Larry Scammell along with Chef Alison Bieber. The Black Iberian Pig is a prized animal throughout Spain. It is generally really high in fat content as it is raised initially on barley and corn, then finished in a number of ways including olives and free pasture grazing. The most prized jamón ibérico are made from pigs fed diets consisting of acorns and commercial feeds. If you think that sounds tasty you can order a plate of it at The Black Pig Bistro. I’m definitely going to try it the next time I am in the neighbourhood.