Oh goodness! I guess I got super busy and this Big Taste post slipped through the cracks. I could have left the post half done with just photos to show the delicious meal I enjoyed at the Blink Restaurant Event hosted by John Gilchrist…but I enjoyed my first visit to Blink so much that I will carry on and publish this. Better late than never, I hope.

I was greeted and shown to my seat upon arrival but since I was early and had been sitting on the train for a fair bit I decided to stand for a while. I had a chance to check out the bar, the washroom, and the pass area where John Gilchrist was going over the finer points of the menu with executive chef Chris Dewling. The restaurant has a modern look that is also very cozy and calming. It also still retains a bit of a ‘historic vibe’ as the building was originally built as a saddlery; not in itself very interesting but when John Gilchrist told us the previous restaurants has had a few ‘equine’ visitors it all made perfect sense.

I had a seat with a few of Calgary’s well known ‘foodies’, including John himself and Maggie Schofield (executive director at Downtown Calgary and creator of Big Taste Calgary) as well as Shannon McNeney, her associate also from Downtown Calgary. It must have been meant to be because I had sat across from Maggie at the Muse event as well but we didn’t get much of a chance to chat because we were sitting at the large central table and much to far away to hold a conversation without shouting. We were able to speak more freely at Blink and Maggie recommended the new cookbook ‘Seasons at SAIT’ recently published by the chefs at SAIT Culinary Campus. As usual I couldn’t resist a cookbook recommendation so I found my way to SAIT and bought myself a copy to read on the train ride back home.

To start we were given the choice between Field Mushroom soup or Salt Baked Poplar Bluff Golden and Chioggia Beet Salad with shaved fennel, black olive vinaigrette, lemon oil, and shaved pecorino. I was pretty torn, but I am also a sucker for beets so I eventually chose the salad. There were some people at our table that chose the soup and it smelled pretty amazing. 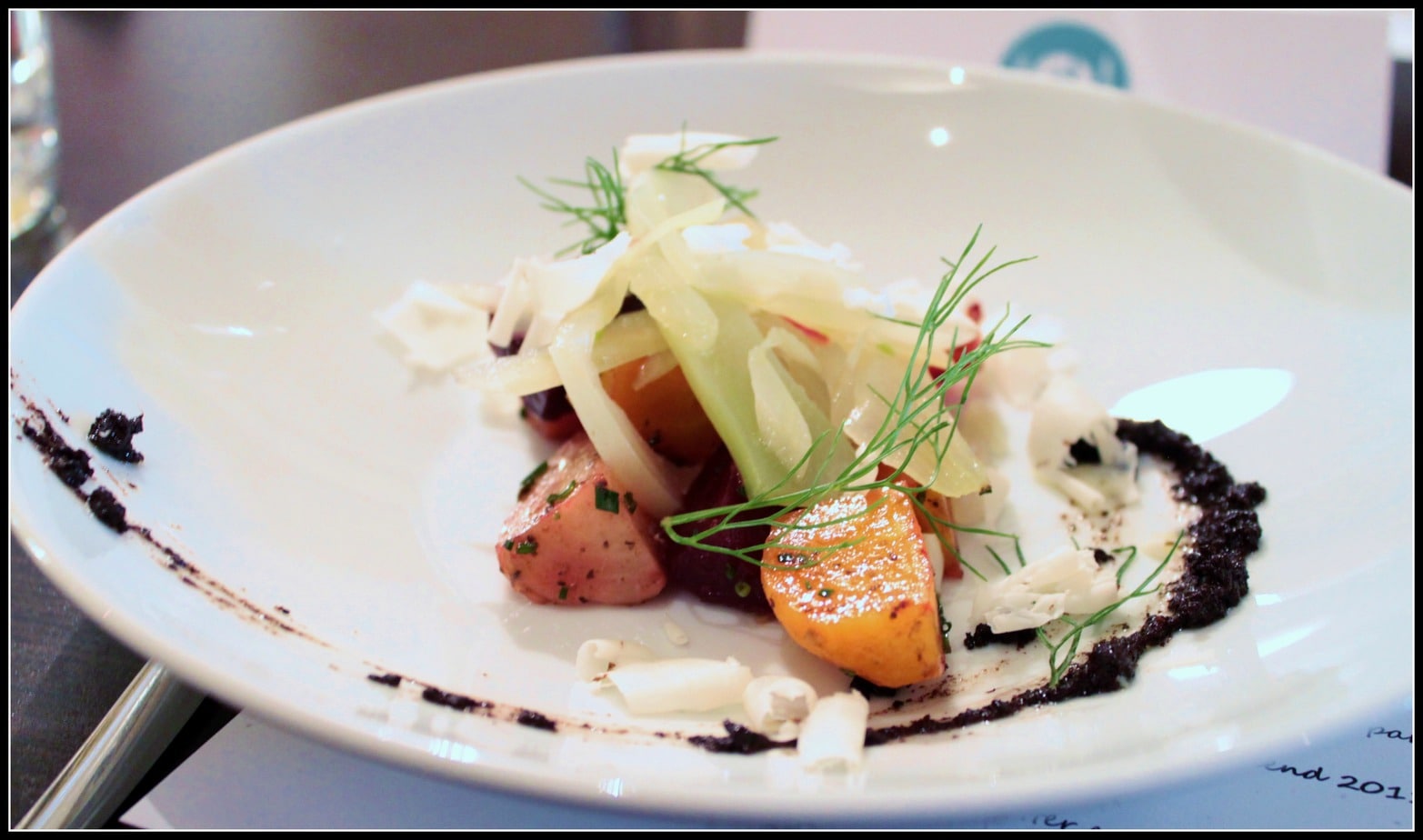 For our mains we had a choice between three dishes; a Ricotta Gnocchi (which I am apt to call gnudi) with sage, roasted hazelnuts, and Parmesan; a Grilled Beef Sirloin with confit rutabaga, parsnip frites, and finally, Roast Fillet of Arctic Char with organic one year aged carnaroli risotto, Jerusalem Artichoke and Balsamic Cream. I was tempted to get the Gnocchi but was a bit concerned it could end up being very heavy and not what I needed for lunch. I was encouraged to chose the Arctic Char as Maggie claimed that Blink makes a terrific risotto…actually we encouraged each other because she mentioned she had been eating a lot of fish and I originally pointed out the risotto. Anyway we were both very happy with our choice.  As it turned out absolutely no one at the event ordered the gnocchi at all so the chef made up several ‘to share’ plates for the event goers to try. I thought that was really nice of him and I may have had a couple of spoonfuls of the very light (but rich) dish. It turns out that Blink also does both risotto and gnocchi really well. Blink makes the extra effort to make their risotto the best it can be by aging the carnaroli rice for a year. The rice takes on a more mature flavour and an improved texture. 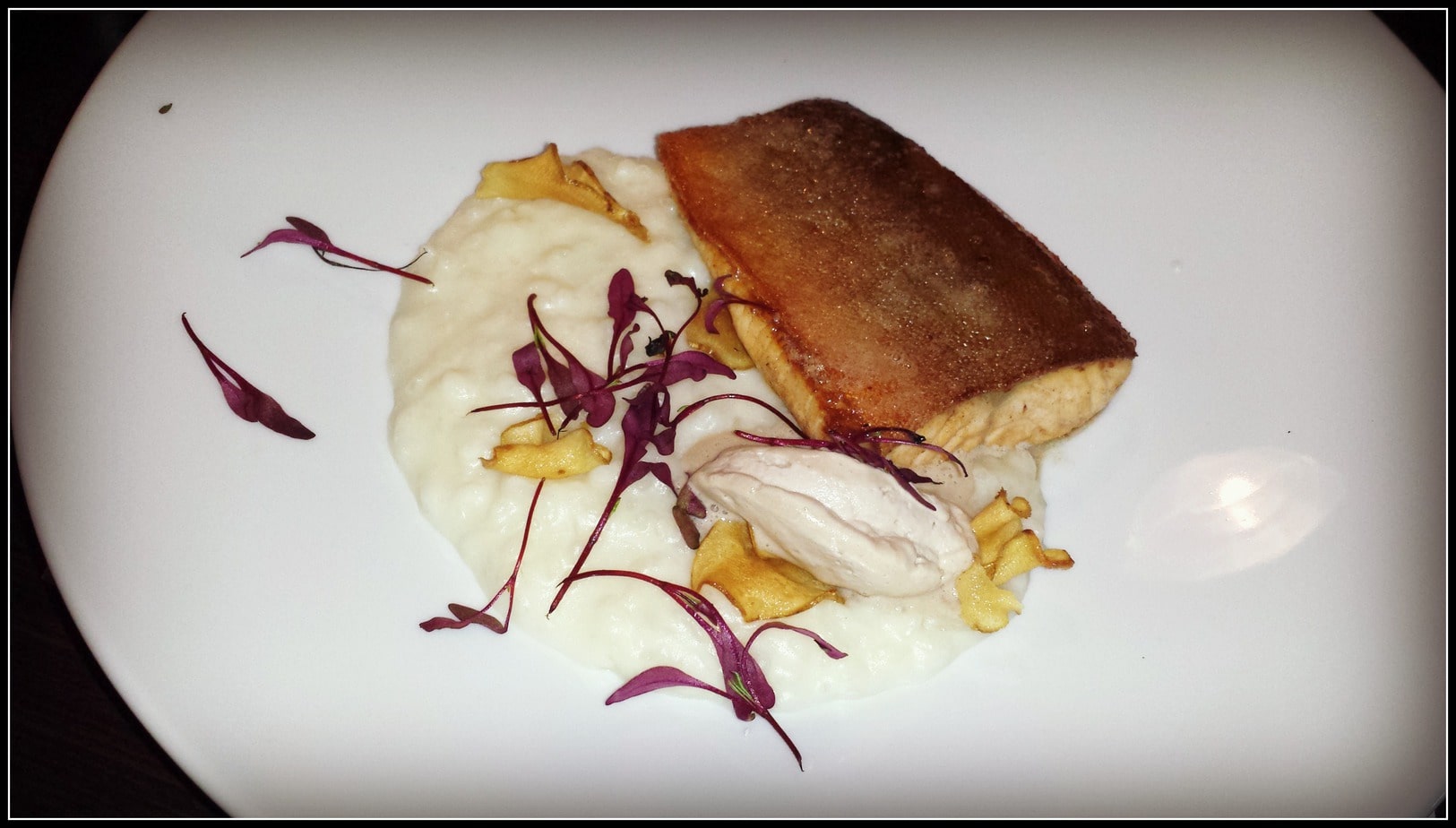 I don’t know how I lived in Australia for three years and avoided Sticky Date Pudding.  I guess it was something I never really understood or maybe just filed away in my brain with ‘Christmas Cake’ or other such British influenced desserts that reek of liquor, odd spices, and dried fruit best eaten fresh….well believe it or not I chose the Sticky Date Pudding with Butterscotch Sauce over the Valrhona chocolate terrine to finish my lunch at Blink. No regrets! Wow, this cake was a stunner with a nice light texture and warming spices but what really made the dish was the butterscotch sauce. I don’t think there’s ever anyway to make this dish look sophisticated…those of us who know that the charm of a sticky toffee pudding is not in it’s appearance  but in the way that this dish radiates comfort. This is the dish that inspired my Sticky Toffee Lentil Puddings with Medjool Dates. 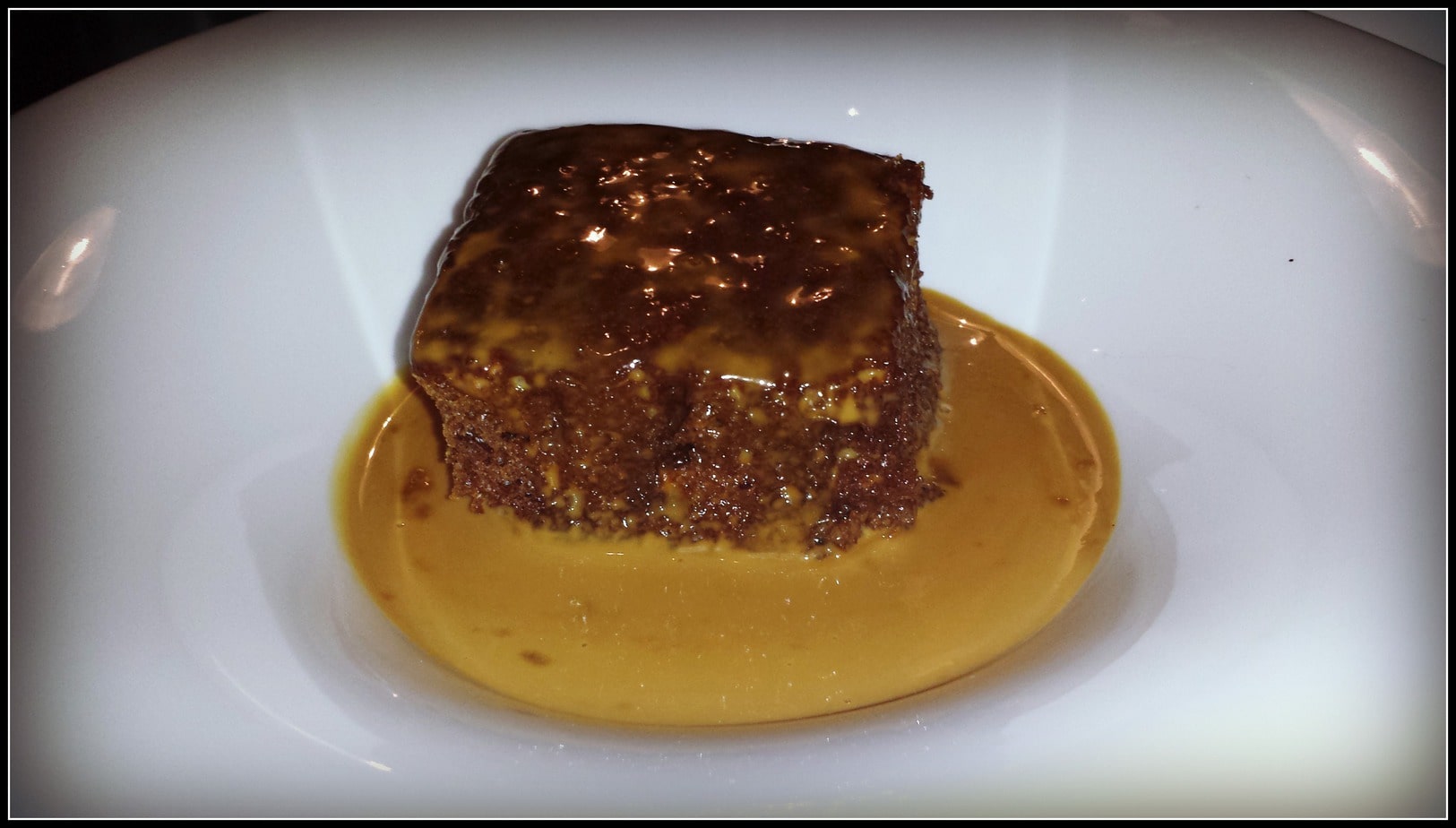 For my first time at Blink I think I was pretty well taken care of. The dishes and flavours were all top notch as were the wine pairings, all Naramata Bench wines from Laughing Stock Vineyards. I’m glad I took the train home…