Brunch at The Lake House

For the most part Hubby is the weekend breakfast chef in our house. He began his breakfast career by making really flat pancakes but I had faith that eventually he would begin to make pancakes as good as his dad does. Isn’t good pancake making genetic? He still has a bit of difficulty timing everything so it’s ready (and hot) at the same time but if I get to sleep in a bit longer, who am I to complain?

It seemed only fair that he didn’t have to cook his own Father’s Day breakfast so I decided to take him out for brunch. We had previously enjoyed a great brunch buffet at Craft Beer Market on New Year’s Day but I failed to get a reservation there for Father’s Day even though I emailed a couple of days early. I’m not sure why I didn’t phone but at any rate we were left hanging on Sunday morning and I was in a panic!

We live in the very south of Calgary so I thought maybe I would try to get a last minute table at The Lake House in nearby Lake Bonavista community. The restaurant uses the OpenTable reservation system and when I typed in a reservation for four at the ’10:45′ slot, I was pleasantly surprised to see an opening. I was hopeful, but soon realized the actual time was 10:30 and hubby was out walking the dogs. Never one to give up hope, I made sure the kids were ready and hoped that he walked through the door soon. He came home two minutes later and we were out the door in another two….and we made it just in time for our reservation. We were seated at a lovely table overlooking the lake and we were soon able to relax and enjoy the view. We ordered some really great lattés and kid number one ordered a hot chocolate. As we sat and enjoyed our coffees we were treated to an amazing lake view. We watched the falcons hunt over the surface of the glass like surface of the lake and even saw a falcon fly by with a fish in its talons. It was the perfect morning.

We’ve never ordered a ‘starter’ or ‘appetizer’ for breakfast before but we couldn’t resist ordering these Lindt Chocolate and Strawberry Beignets. They were nothing like the beignets in New Orleans but they were delicious in a different way. The prosecco cream was a bit odd for us, it just tasted a bit off so we ignored it and ate the beignets without it. 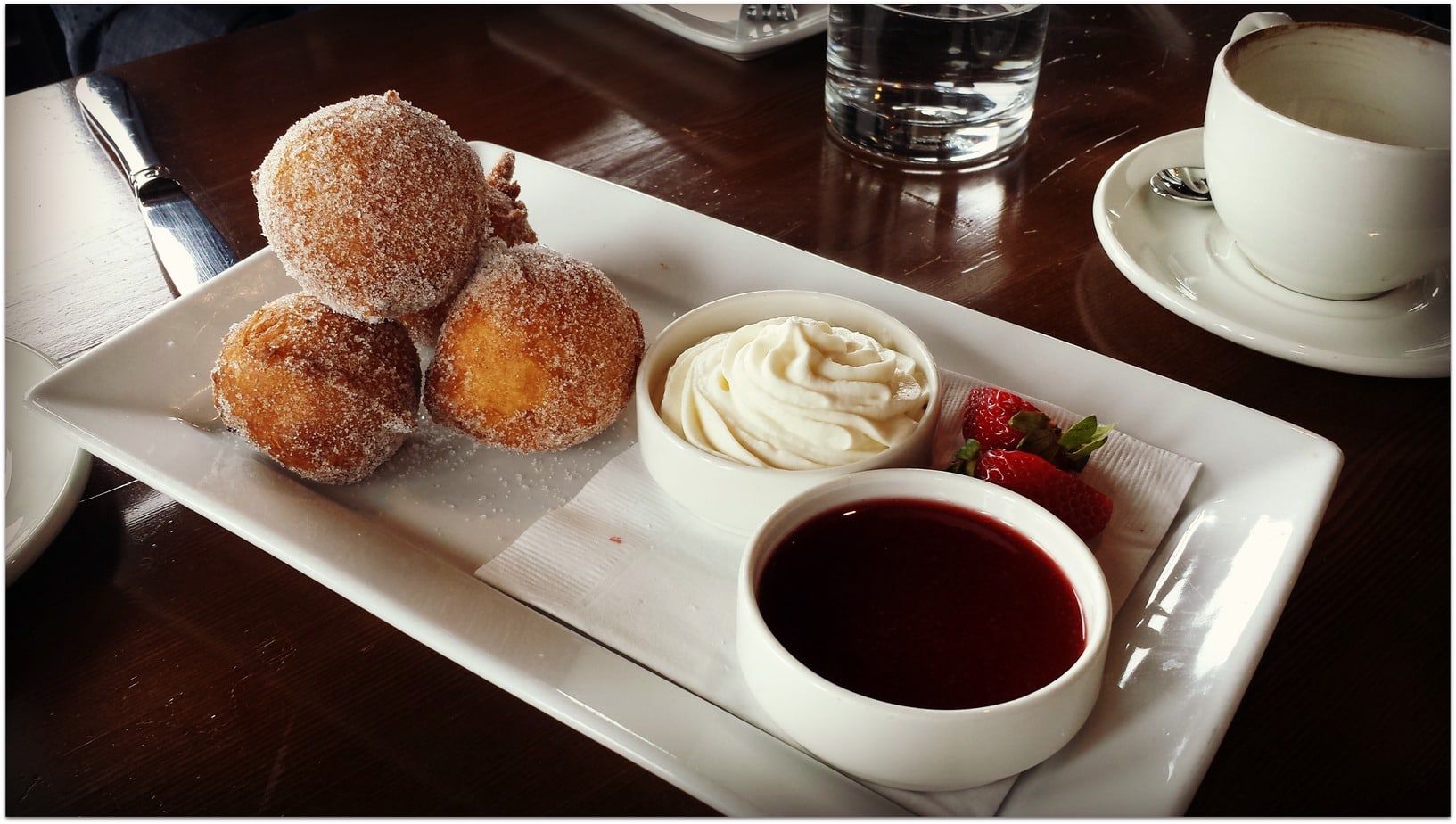 Most of us wanted to have Eggs Benedict; it’s a favourite in our family. Hubby decided to order the smoked salmon version just to be different from kid number two and I. He loved the flavours but found the dill biscuit couldn’t stand up to the heat and humidity of the eggs and hollandaise. It fell apart and was awkward to eat. I think he would order it again but ask for it to be served on a traditional English muffin. 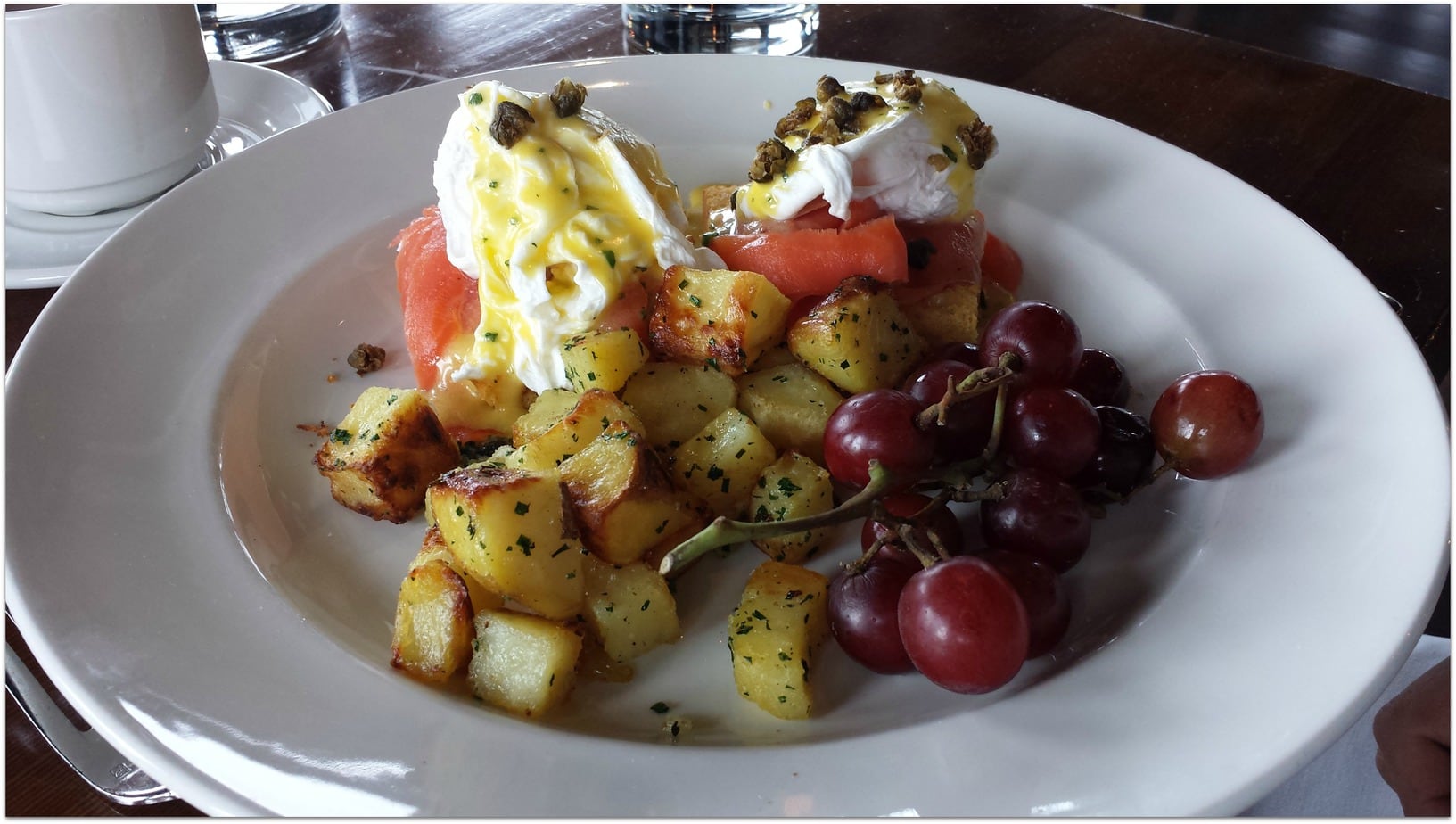 Kid number two and I really enjoyed the more traditional ‘Lake House Eggs Benedict’.  The eggs were poached perfectly (medium for us) and the hollandaise was the best I’ve had. I couldn’t wait to blog about it so I tweeted that I wouldn’t mind having litres of it to bathe in!

Kid number one went the non traditional route and had the Bison Brisket and Game Meat Chorizo Hash. It came with an egg on top and more of that amazing hollandaise. The bison was fork tender and the saltiness of the dish was balanced really nicely with the addition of sweet corn. He really surprised me here as I thought he would go for the Wild Boar Mac ‘n’ Cheese.

The atmosphere, service, and food quality were outstanding at The Lake House. I’m happy to live very nearby so we can visit again. Maybe hubby will get to sleep in on the weekend a little more often now.