I just couldn’t face another day inside the house looking out at the impending snowmageddon. One day inside on a weekend is manageable but two makes me go a touch squirrely.  After having a leisurely waffle breakfast made by hubby (he does weekend breakfasts) we decided to head to the core of the city of Calgary and more specifically to ‘Chinatown’. Calgary’s Chinatown is not all that large if you compare it to others in cities like Vancouver, Toronto or Montreal. In fact it is Canada’s fourth largest Chinatown after those three. It does have several bakeries, bubble tea establishments, markets and herbal shops.  Two large buildings dominate the Chinatown facade. The very traditionally styled Chinese Cultural Centre and the less traditional but ever popular Dragon City Mall.

There are several place to go for Dim Sum on a Sunday morning but we usually go to Silver Dragon. Silver Dragon has been in operation for 44 years. On this Sunday in 2013 it appears to still be a very popular place for dim sum despite some reviews that suggest the place has suffered in quality and taste. I’m not sure about that because we’ve only been going for ten of those years. The food does vary from visit to visit but as long as we get a taste of our favourites, we’ll continue to dine there. We’re not big fans of ‘Canadian Chinese’ food and much prefer more traditional dishes so dim sum is usually our only Chinese option in Calgary.

I remember our first Dim Sum experience like it was yesterday. Kid number one was probably only two years old then, kid two four and kid three, 8.  None of them knew how to use chopsticks but kid three tried his best and it wasn’t long before he figured it out. We ended up buying two pairs of ‘trainer’ chopsticks for the other two. These chopsticks are attached at the top so that the kid gets used to the pinching motion before dealing with the proper way to hold the traditional version. Our first Dim Sum was at Regency Palace at the top of the Dragon City Mall on a Mother’s Day. It was completely packed and utter chaos. It was a while before we figured out we had to ask for a waiting number and we had to listen quite carefully as the numbers were called out loudly in Cantonese, but only very quietly in English. Back then the younger kids were only interested in noodles, sticky rice and pork buns. It took a while to get them to eat anything else but now dim sum is much more of an experience. Don’t get me wrong, we’ll never be fans of tripe or chicken feet but our dishes are a lot more varied than when we first started going.

When we go for dim sum, our favourite cart dishes are:

Siew Mai: Sunday we had both a mixed Salmon/Shrimp Version and a Pork Version. There are only three of the pork siew mai because they were the first dish and everyone had their chopsticks at the ready. 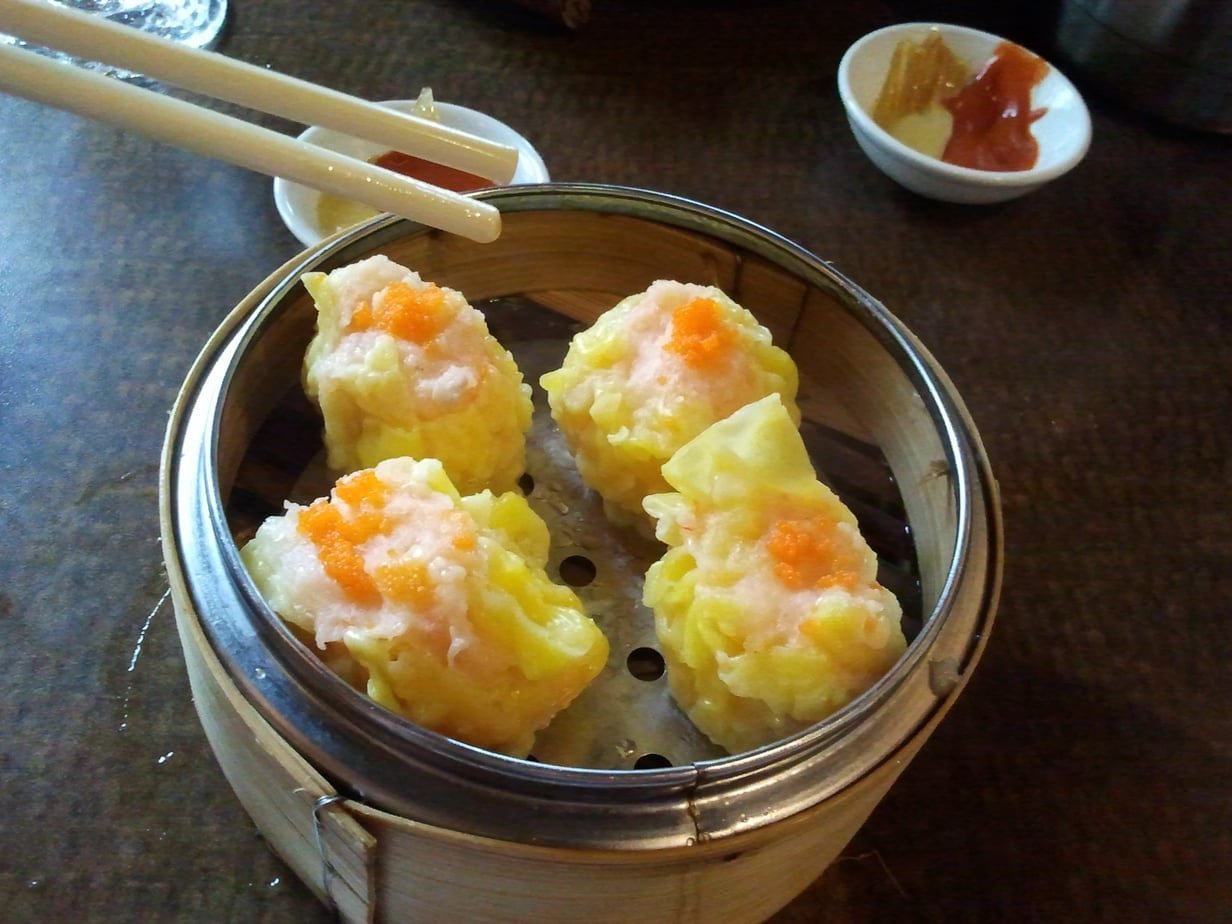 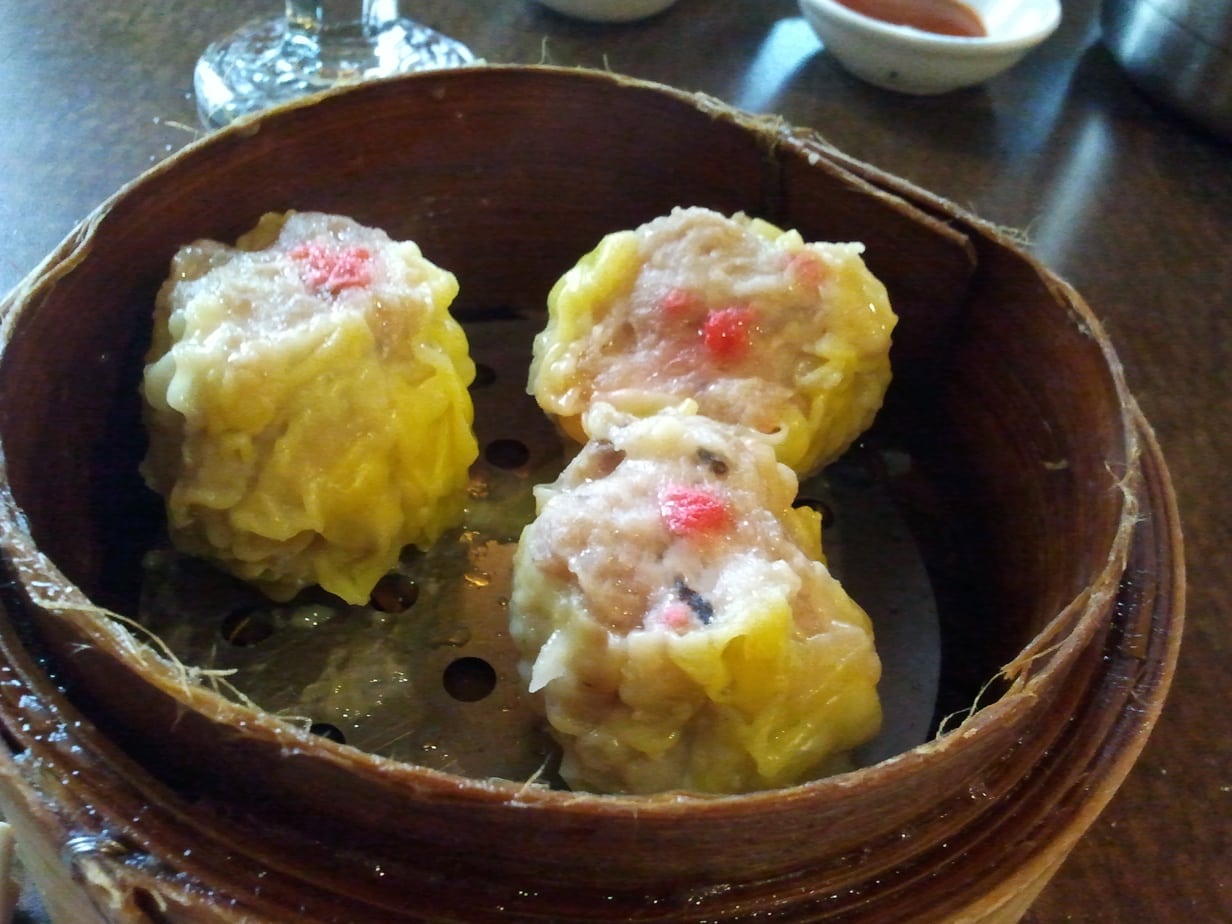 Sticky Rice: Still an old favourite. We love the large chunks of chicken, Chinese sausage, and Shiitake Mushrooms. This sticky rice was not the best one I’ve had. 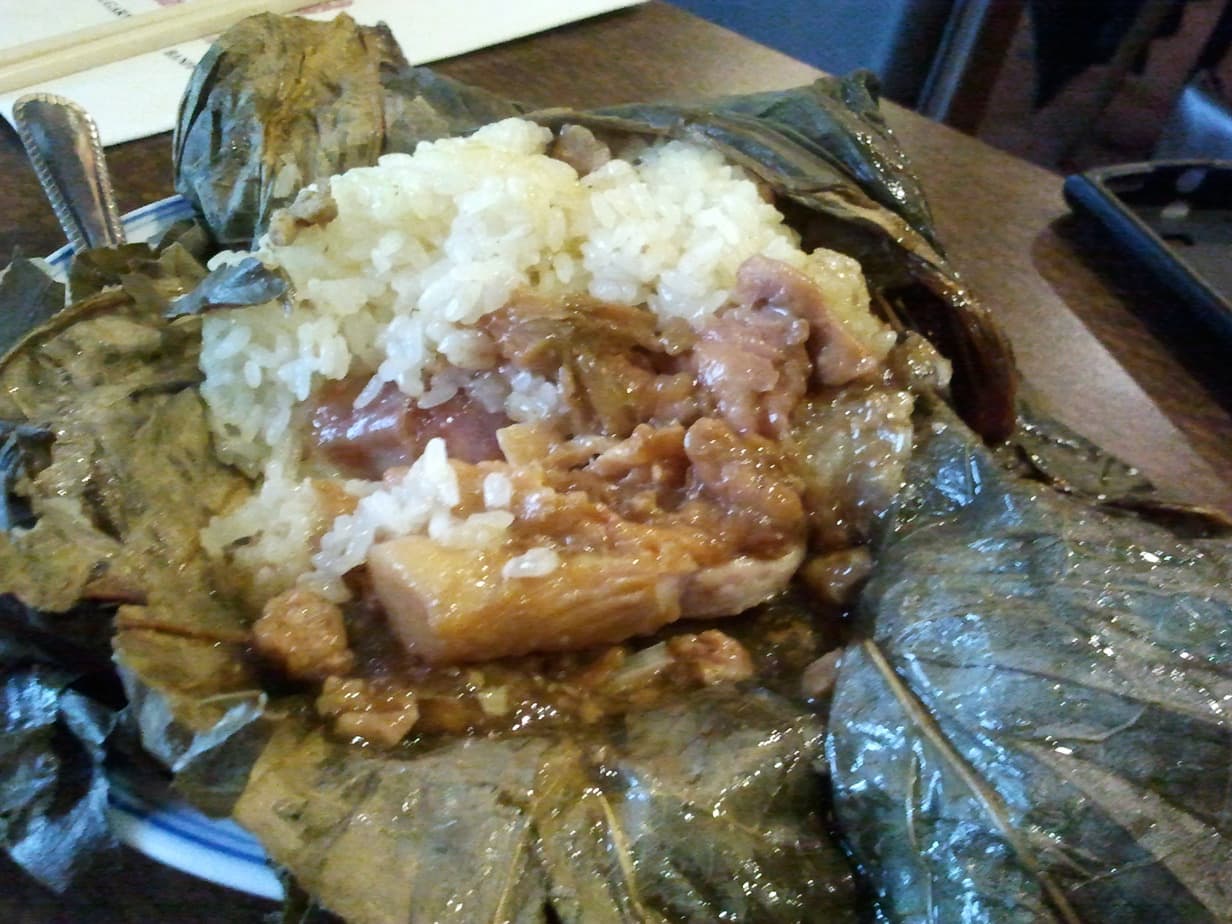 Har Gow: Today ours were filled with shrimp and mixed vegetables. I really like the ones that also have peanuts. I almost didn’t get a picture of these, that is hubby’s hand in the bottom right corner trying to snatch them away! 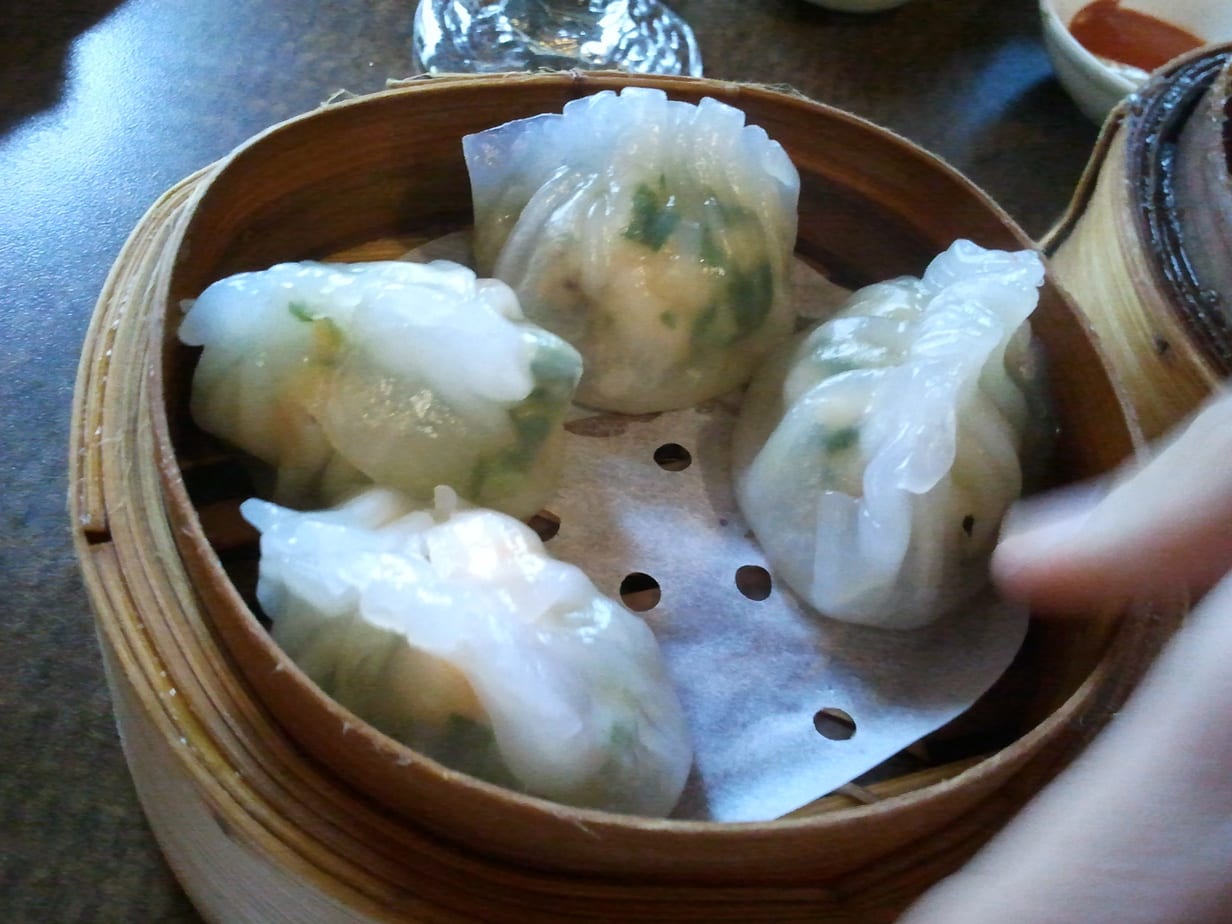 Prawn Stuffed Green Peppers: A disappointment today because they were stone cold.

Steamed Pork Buns: Still another family favourite. Today they were absolutely delicious with a nice bite of cinnamon. I really need to learn how to make these. 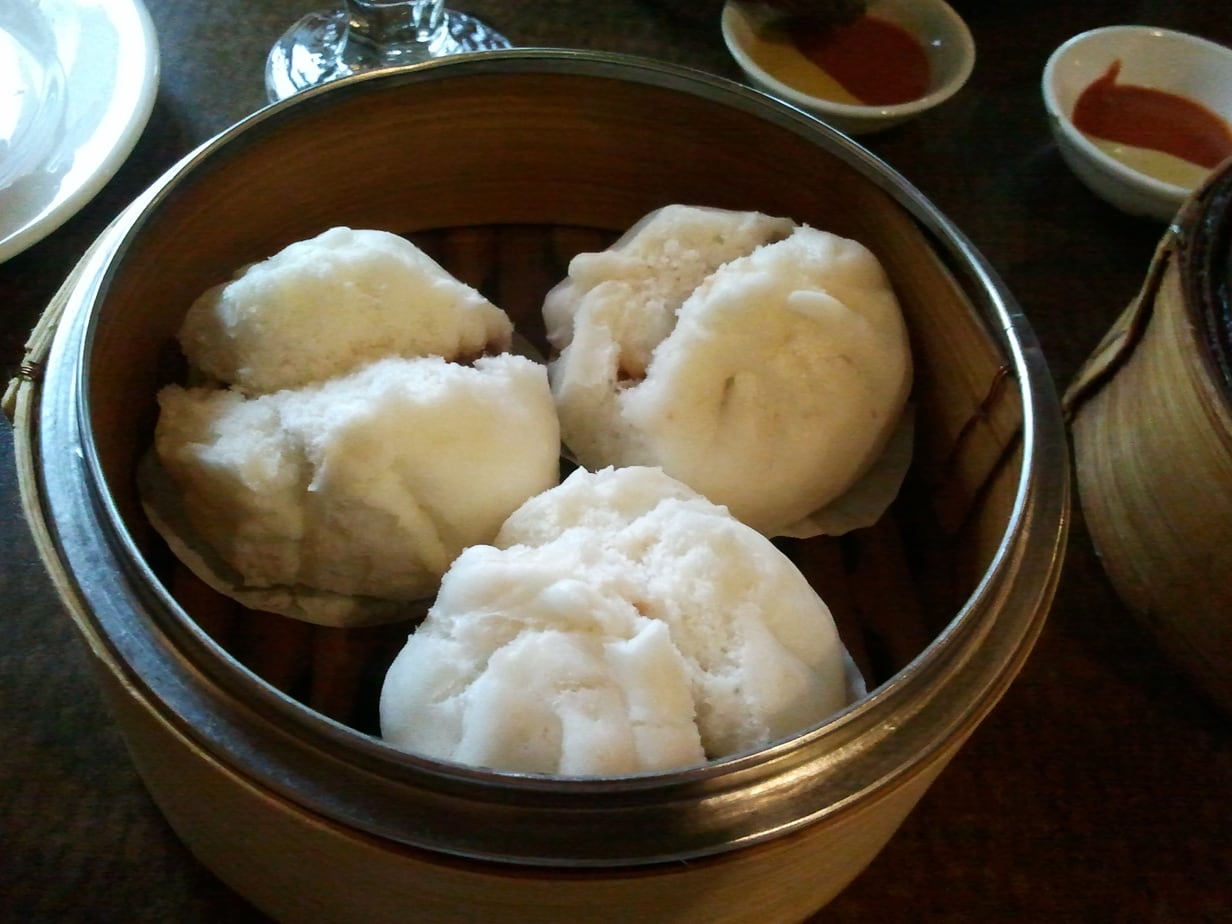 Ginger Beef: One of those ‘Canadian Chinese’ dishes that we usually try to avoid. We were stuck in the corner and at this point had lost hope of getting some salt and pepper squid or curried octopus. It was a move of desperation. They were surprisingly delicious. 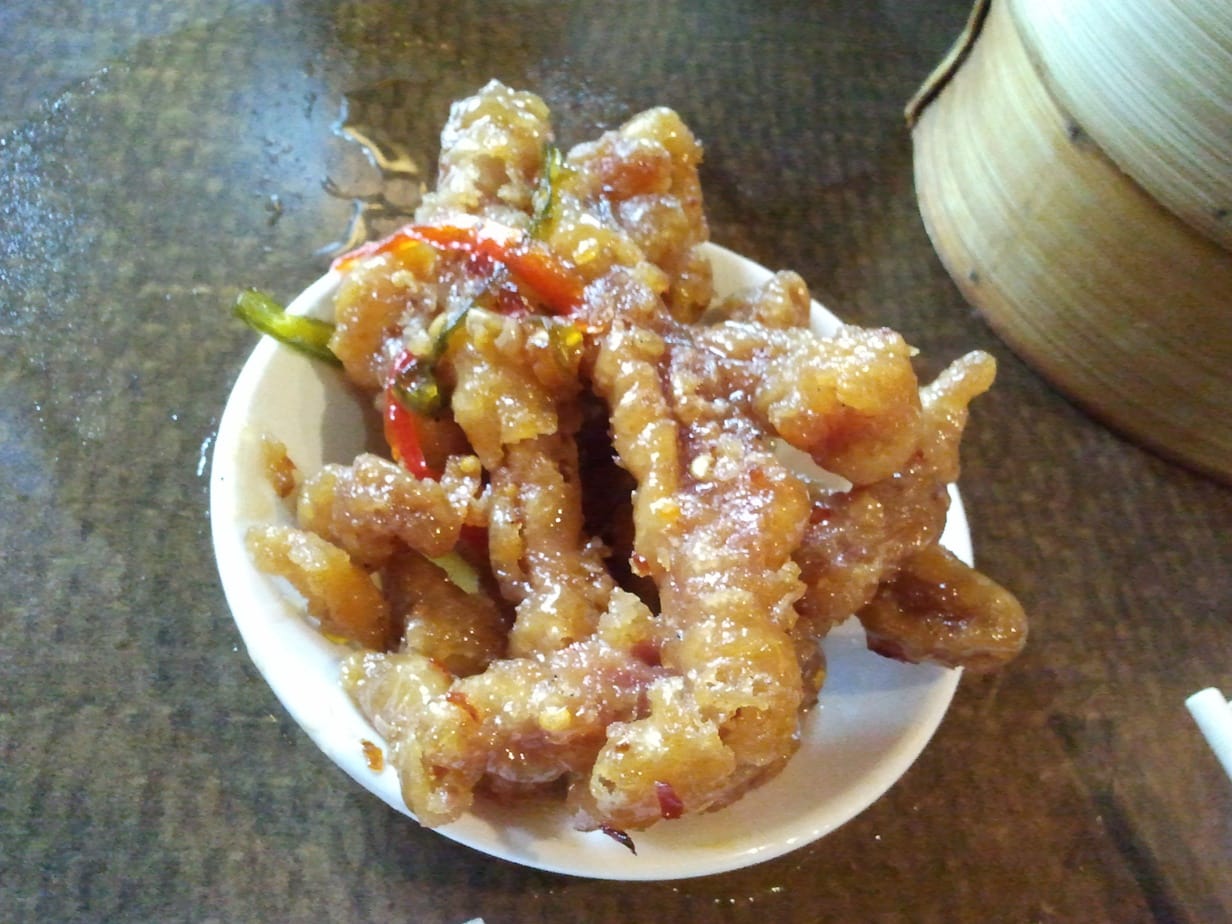 Curried Baby Octopus: A dim sum ‘must have’ for me. Our waitperson, William saw that we were surprised at the octopus. I explained that we’d been expecting curried octopus which is generally yellow and this octopus looked like it had tomatoes or some such nonsense with it. He said that they had started using this red curry recently because it had more flavour. After I tried the octopus I had to agree. In addition, the octopus was steamed to perfection and very tender. 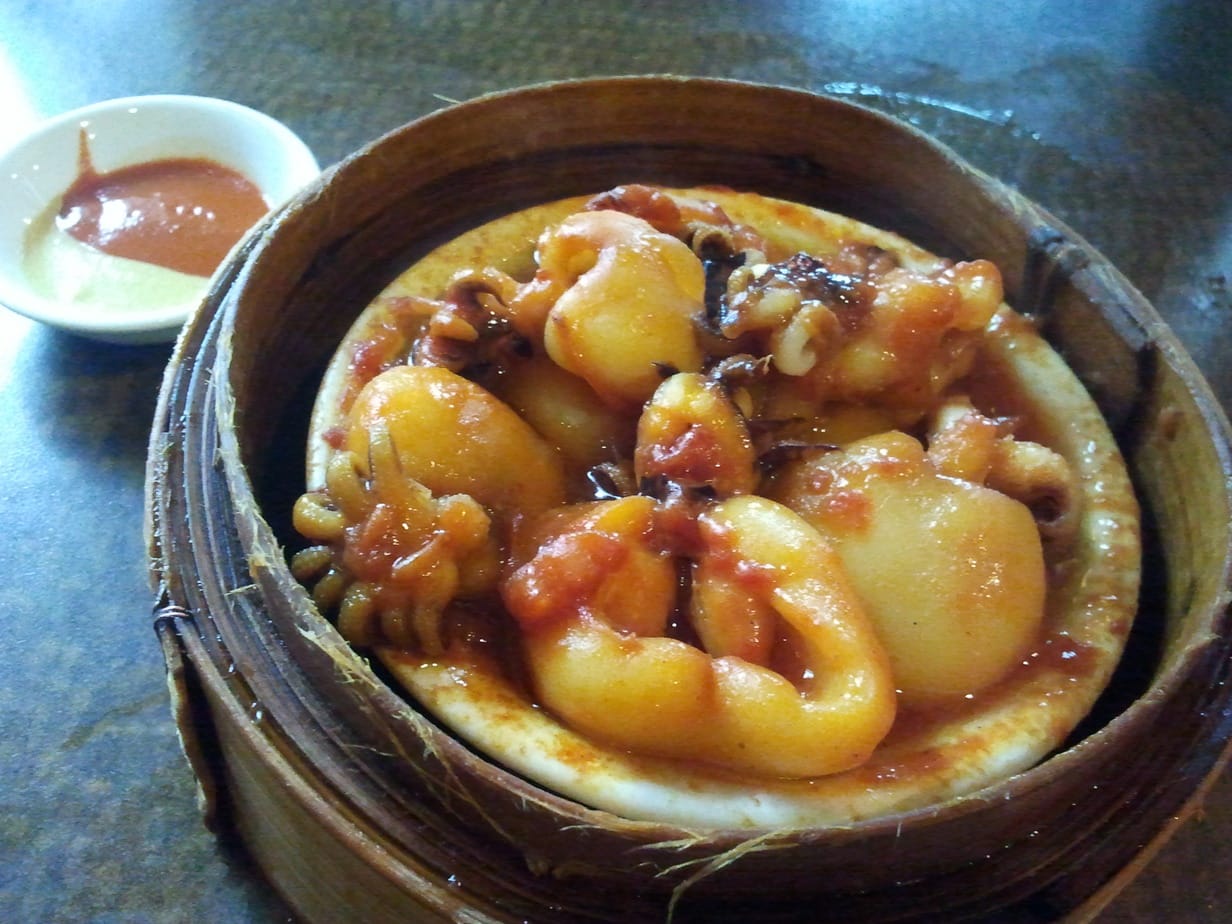 And of course, the kids had to end dim sum with a bowl of cubed jello. They always work out between them who gets to use the spoon and who uses the tiny umbrella to spear the cubes. Maybe some of my Asian readers can explain the Asian attraction to jello. It always is a dim sum staple and there is a huge selection of it at any Asian market. Several of my friends back in Australia made many molded jello treats for various functions but I never got to ask them about their love for jello 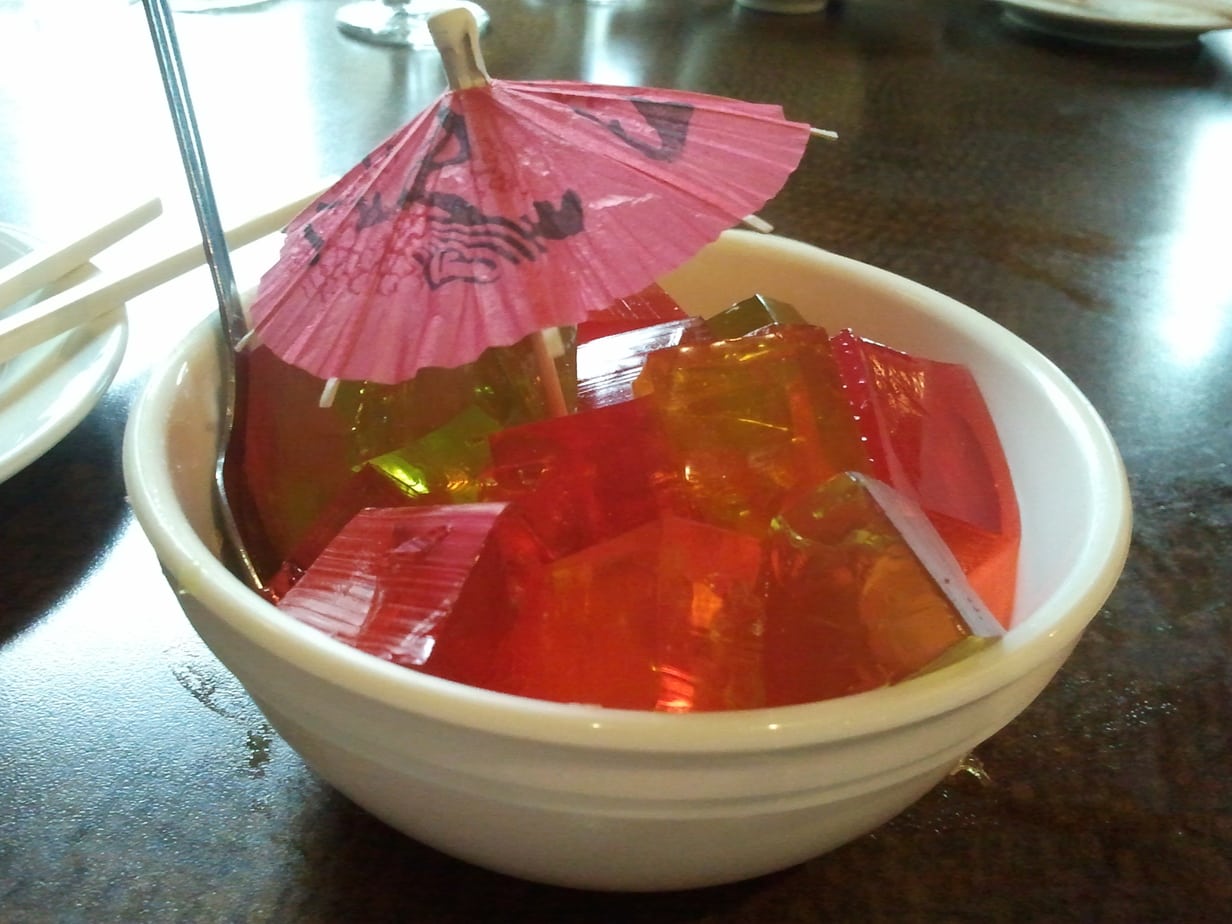 Other dim sum favourites that were absent today: Salt and Pepper Squid, Garlic Shrimp/Octopus, Cong yu bing (onion cakes), mushroom spring rolls (with Worcestershire sauce), red bean sesame balls, and steamed broccolini with sauce.
Now that the kids are much older (18, 14, 12) and we still love going for dim sum.  Kid number two recently let me know that she was thankful that she knew how to eat with chopsticks because it would have been ‘really embarrassing’ to have to ask for a fork in all the Asian countries and restaurants we’ve visited. Our kids have had the opportunity to use chopsticks in Canada, South Korea, Singapore, Malaysia, Indonesia, Thailand, the US, and Australia.