Dish ‘n’ the Kitchen Turns One! The Joys and Memories of Butter

One year has gone by in a blur. Many thanks to each and every one of you for being interested in what I do. I’ve tried by best to give you mouth watering recipes and photos but it’s mostly been my pleasure to have you here with me. I’m proud of how far this blog has come in a year…223 followers (that’s you!), 213 posts, recipes I may not have tried ‘on my own’, the comments and suggestions, and the friendships made along the way. I’m so looking forward to what the second year of Dish ‘n’ the Kitchen will bring.

Butter. Full fat, sweet, salty, slippery, toe curling butter. There is nothing else like it and probably never will be. As long as humans have milked an animal of some sort you can be sure there has always been butter. Most probably discovered by some village idiot or boisterous child who played a practical joke by shaking up the last of the day’s milk supply until it solidified.  I’m sure they were shunned or even whipped by their superiors who failed to see the humour in the situation.  In time they were desperate enough to try the coagulated milk solids and most forgiving when they realized ‘butter’ was as delicious, if not better than the actual milk.

Of course, I really don’t know the whole story of how butter came to be but the origin of foods is something that I am always thinking about. Just exactly how did the first olive get pressed for oil, or how did some woman decided to dry grapes to make raisins? I’m sure my kids wished she hadn’t and that raisins were never ‘invented’ but I think we can all agree we are glad the historical foodies of the world were as adventurous as they were.

My love of butter stems from the time spent baking by my grandmother’s side. She was a typical housewife of the 40’s and 50’s, making sure her family was fed was her top priority. Most meals were not fancy but hearty and filling. And regularly scheduled. I’m talking about Sunday pot roast, Monday beef and gravy sandwiches, Tuesday Pork Chops, Wednesday Meatloaf, Thursday Chicken, and Friday Fish.  And repeat. When it came to baking, however, she would have been the one to try the latest recipe in the local paper, especially if it was a cake.  It’s no wonder I enjoyed baking with her because I fed off her radiant joy and off of knobs of butter from the tip of her butter knife. I remember her telling me that sneaking a slice of butter in the middle of baking was one of her favourite things and that nobody minded, not one bit.

Unless you are French, or another type of butter fiend you may be a bit worried at this point. Butter has previously been given a bad rap. It’s high in milk fats, saturated fat from animals and was supposed to raise cholesterol and increase the incidence of heart disease. I believe this is total rubbish. My grandmother lived until she was 97. She wasn’t a smoker or a drinker but she loved bacon, fried chicken, fish (and chips), and of course butter. Butter is natural and much more pure than processed margarine and vegetable oils. It contains fat soluble vitamins, protects your body cells and your brain. It has actually been shown to improve heart health because it increases your good cholesterol.  I think that possibly the secret to living a long happy life is eating more butter, less margarine and keeping active.

So I switched my old Cinnamon bun recipe to one that contains butter. Yep. I couldn’t help myself when I saw the luscious buns in bon appetit magazine. In fact I have written about them before so this is a bit of a repeat. Today, to celebrate one year of blogging I decided to improve upon the best ever cinnamon bun recipe by layering them in a bundt pan and baking them with bits of apple and a gooey sticky sauce. There wasn’t really a method to how I layered them. I only made sure the buns on the outside were flat against the pan. 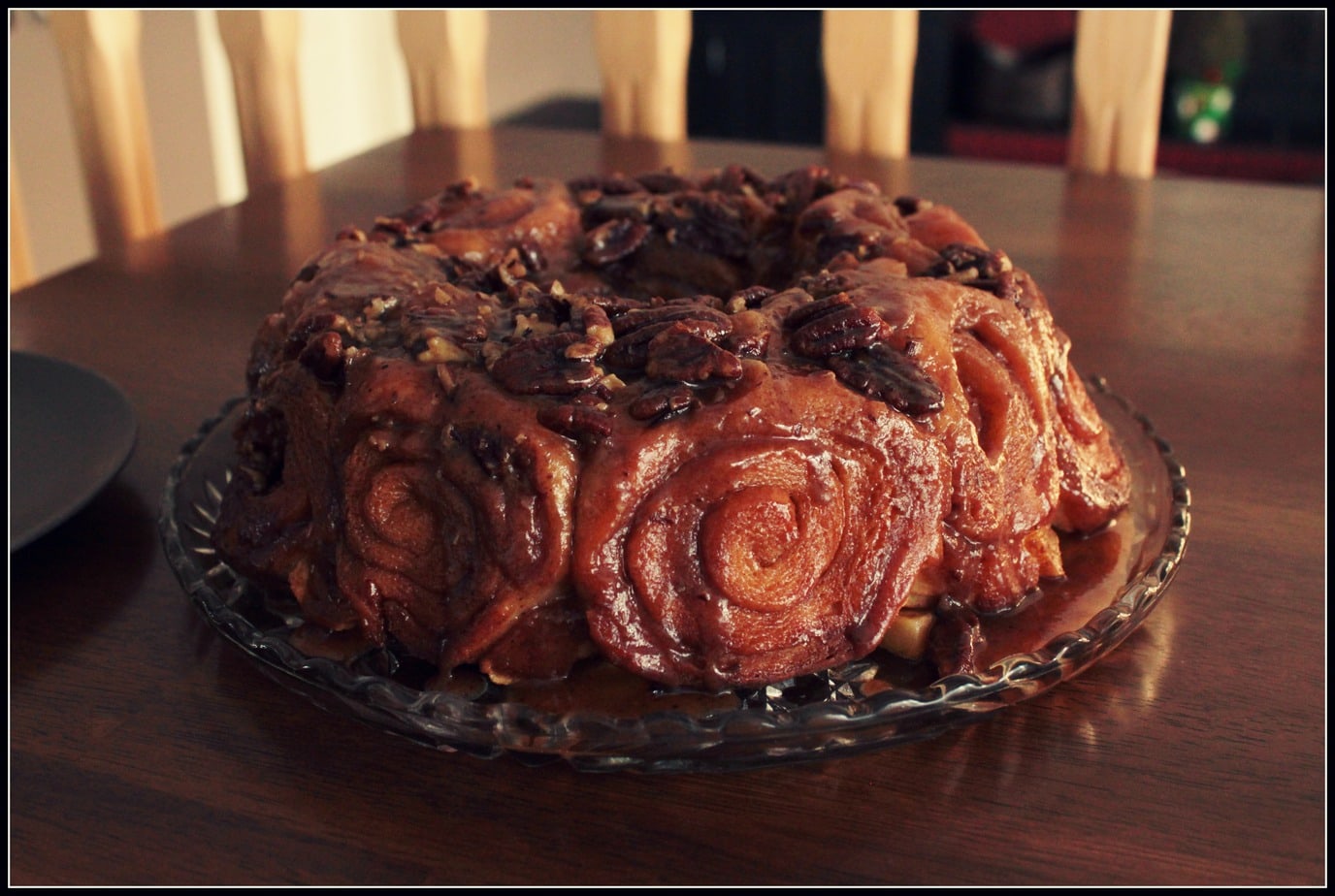 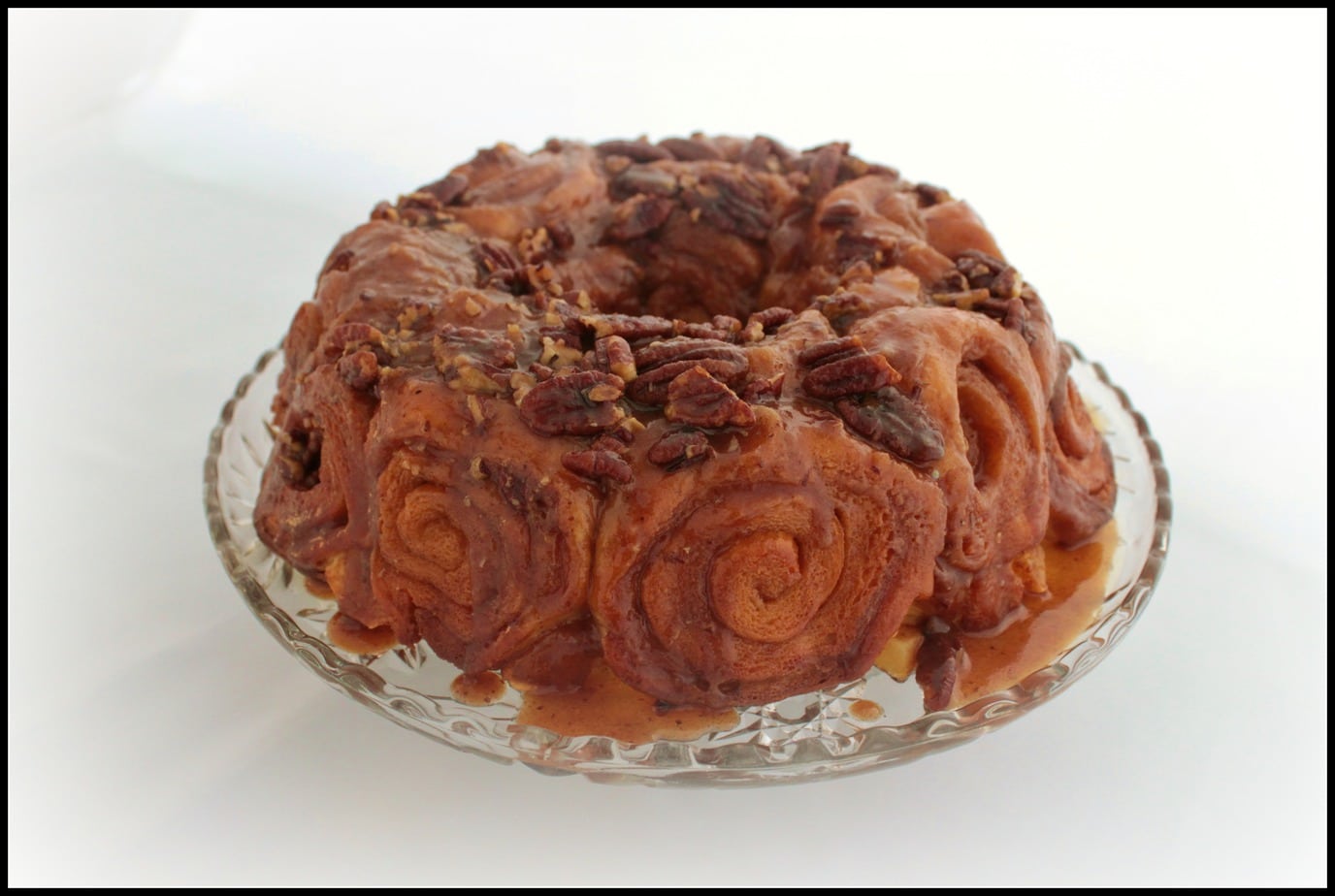