One year. That is approximately how long I’ve been waiting to go to Downtownfood.  I know this because last year at this time I was blown away by the food porn shared on social media by the 2013 Big Taste dtf attendees. When tickets for their Big Taste Collaboration dinner went on sale I made sure to snap up two of them. I don’t think Hubby was as excited as me to go but he does have a tendency to down play excitement while I just spew it forth. In fact, all Saturday afternoon I was counting down the hours and jumping around with a huge smile on my face.  Of course, seeing the sun come out and with temperatures well above freezing I may also had a touch of ‘spring fever’ as well.

We arrived just in the nick of time and were seated at the long central table with people we had never met. The old me would have panicked but I’ve been really pushing myself to take chances and meet new people. By the end of the evening we were no longer strangers but fellow foodies with satiated stomachs and minds.  The great thing about large events like these is that it draws like minded people who are all after the same thing…great food! Food is a superb conversation starter…

Speaking of starters, the Big Taste Collaboration dinner at Downtownfood started out with a bang! Sichuan Eggplant with Sichuan Pickled Peppercorn Cucumbers, sweet ginger and garlic…rice and sesame crisp.  I’m glad I had one glance of the menu when we first sat down because I had the opportunity to tell the server that I could not eat the eggplant. Not that I wouldn’t prefer to have the full menu as intended but more like because of the possibility of my throat closing. Hubby did have his and he said that the sweetness and spice of the eggplant was well suited to the wine pairing, Dirty Laundry Riesling. This Riesling is a good choice for spicy dishes with a bit of sweet and sour so it also went with my last minute substitution.  The server didn’t tell me what it was but I’m pretty sure it was scallop and prawn ceviche with chili oil. 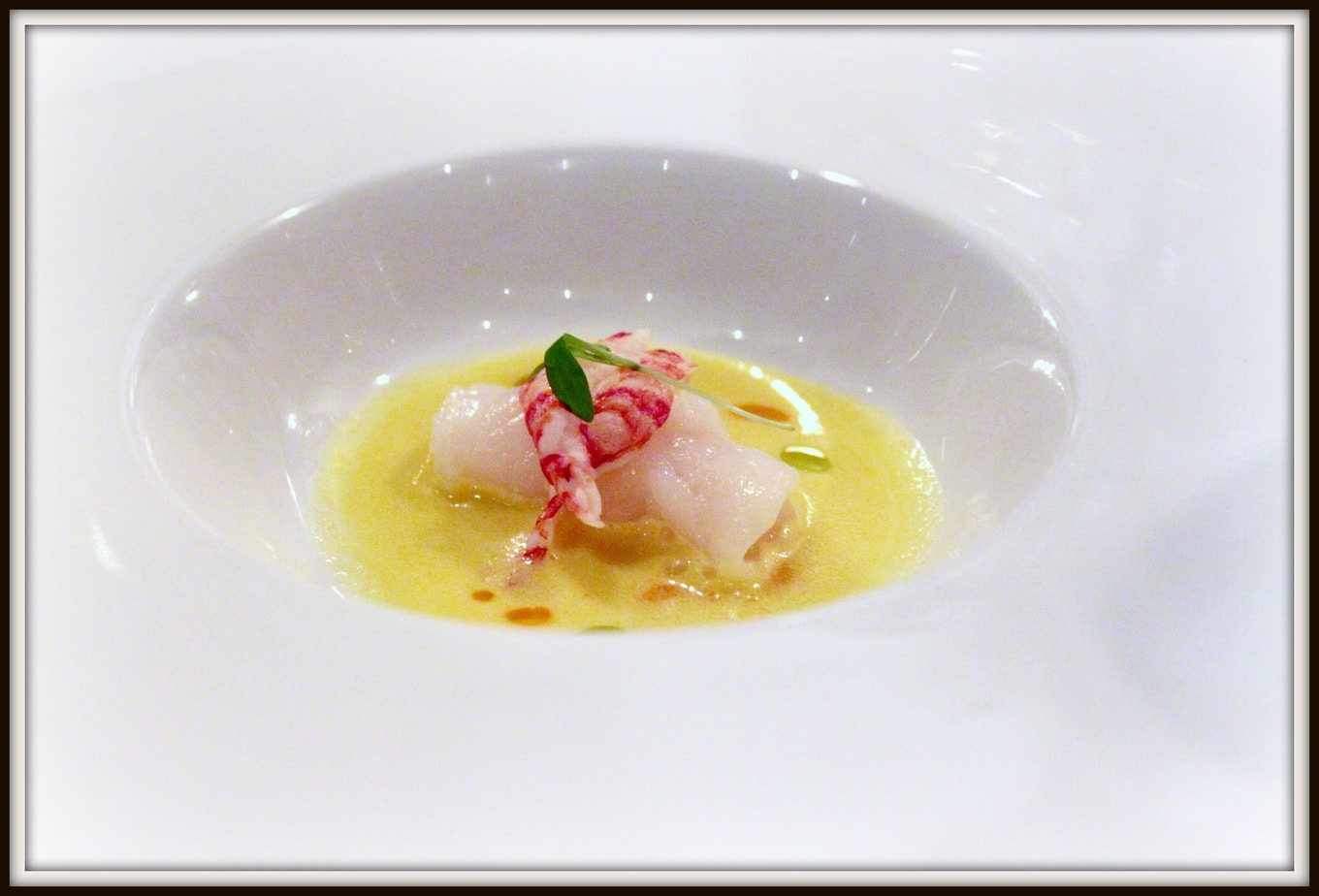 Apologies for not having a picture of Hubby’s Eggplant. None of the pictures I took of it turned out so I tried a different method of taking pictures with the rest of the courses. I don’t like to use flash in a restaurant and I’m normally quite aware of disturbing other patrons around me…except at foodie dinners! I had Hubby spotlight the dishes with the ‘Assistive light’ function on my phone and I think he did quite well. I give him props for being a super lighting assistant.

Second course by 2013 Calgary Golden Plate Winner Duncan Ly (of Raw Bar)was seared line caught Itsumo Ahi Tuna.  It must be mentioned here that Downtownfood is a completely Ocean Wise restaurant, partnered with the Vancouver Aquarium to ensure they make the most responsible decisions regarding the seafood they serve. That explains the line caught tuna. From top to bottom the dish was a feast for both eyes and stomach. Mint chiffonade with greens, then a compressed cucumber slice cup holding pomelo and scallop tartare sitting on top of the seared tuna ‘raft’. The broth was flavoured with Melon and Makrut Lime. To be honest, it bothers me a lot when everyone calls them ‘Kaffir Limes’ and then go on to say it’s not politically correct or is offensive to some. Either just call them ‘lime leaves’ or find a suitable name for them. Ok rant ended. Whatever you call them, they have an amazing, unmistakeable flavour and were lovely paired with the melon. Speaking of pairings, the Maverick Origins Sauvignon Blanc/Gewürztraminer blend was delicious with this course. 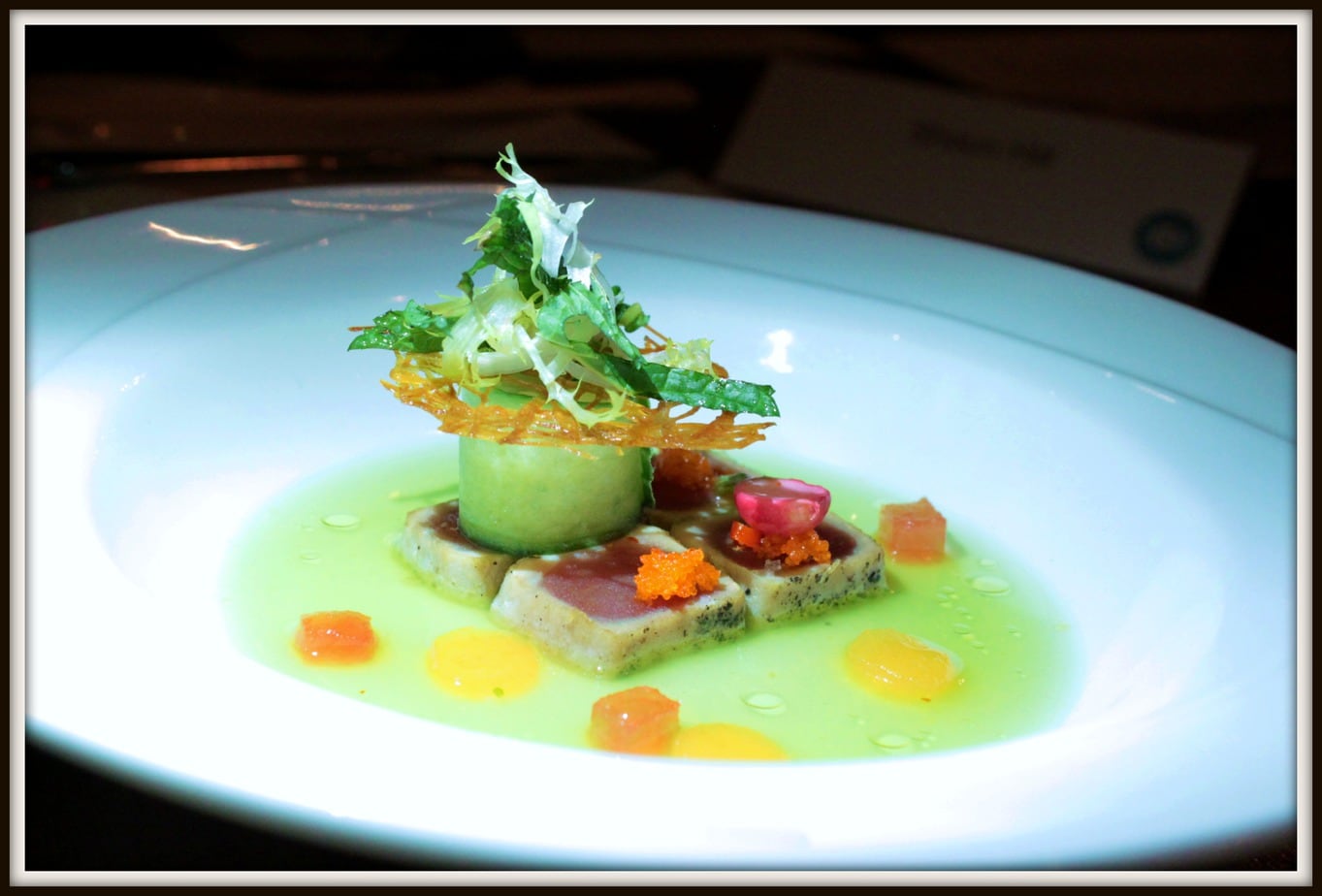 I’m not a ‘nose to tail’ sort of person so when I heard we were having beef tongue I was a bit put off. Imagine my surprise when this Beef Tongue Torchon became my favourite course of the night! The tongue was slow cooked, shredded then put back together into a long cylinder and wrapped in a towel. When the meat has cooled and melded together it is unwrapped and sliced, then seared. To use a Canadian analogy, it looked like a hocky puck. I could never have imagined that this method of cooking would yield such a thoroughly edible result. I loved every element of this dish though, not just the tongue. The shiso/umeboshi gastrique was smokey, sour, and spicy all at once. The caper berry tempura was a huge hit of salty sour to cut through all the richness in that dish. But my favourite element for the whole dish were the smoked grapes! It was such a different flavour and one most likely attainable at home. I am definitely going to try this!  Several diners at our table admitted to not really being Rosé drinkers, but the Sandhill Rosé pairing was outstanding, especially with the smoky flavours. 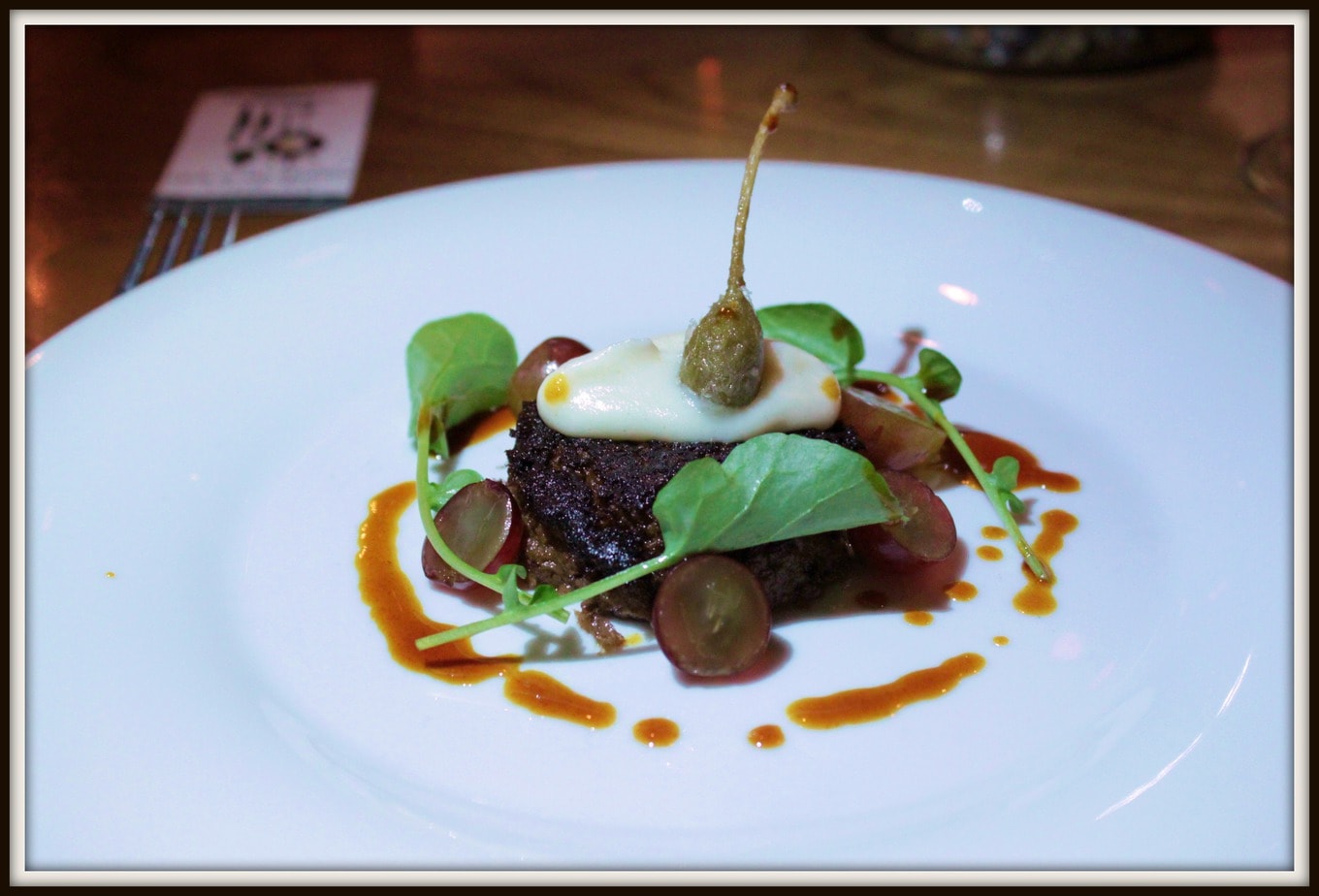 Fourth course, the Sous Vide leg of Venison. Chef and owner Darren MacLean explained how they broke down the leg into separate muscles and removed all the connective tissue in a process called ‘Denvering’. Each muscle was then sous vide separately. For me, the meat was a bit on the rarer side of medium rare and the sous vide method was not adequate in breaking down some of the connective tissues which still remained. Hubby and I had a difficult time cutting and chewing the meat. We did love the flavours though, the cornichon salsa and red braised cabbage were perfect. The chipotle/ovaltine combination was also interesting in the sauce, very thoughtful flavours. Also, who can argue with a big chunk of seared Fois Gras? Surely, not I.  This course was paired with the Clos Du Soleil ‘Signature’, a blend of just about everything…Merlot 44%, Cabernet Sauvignon 23%, Cabernet Franc 22%, Petit Verdot 5%, and Malbec 6%. 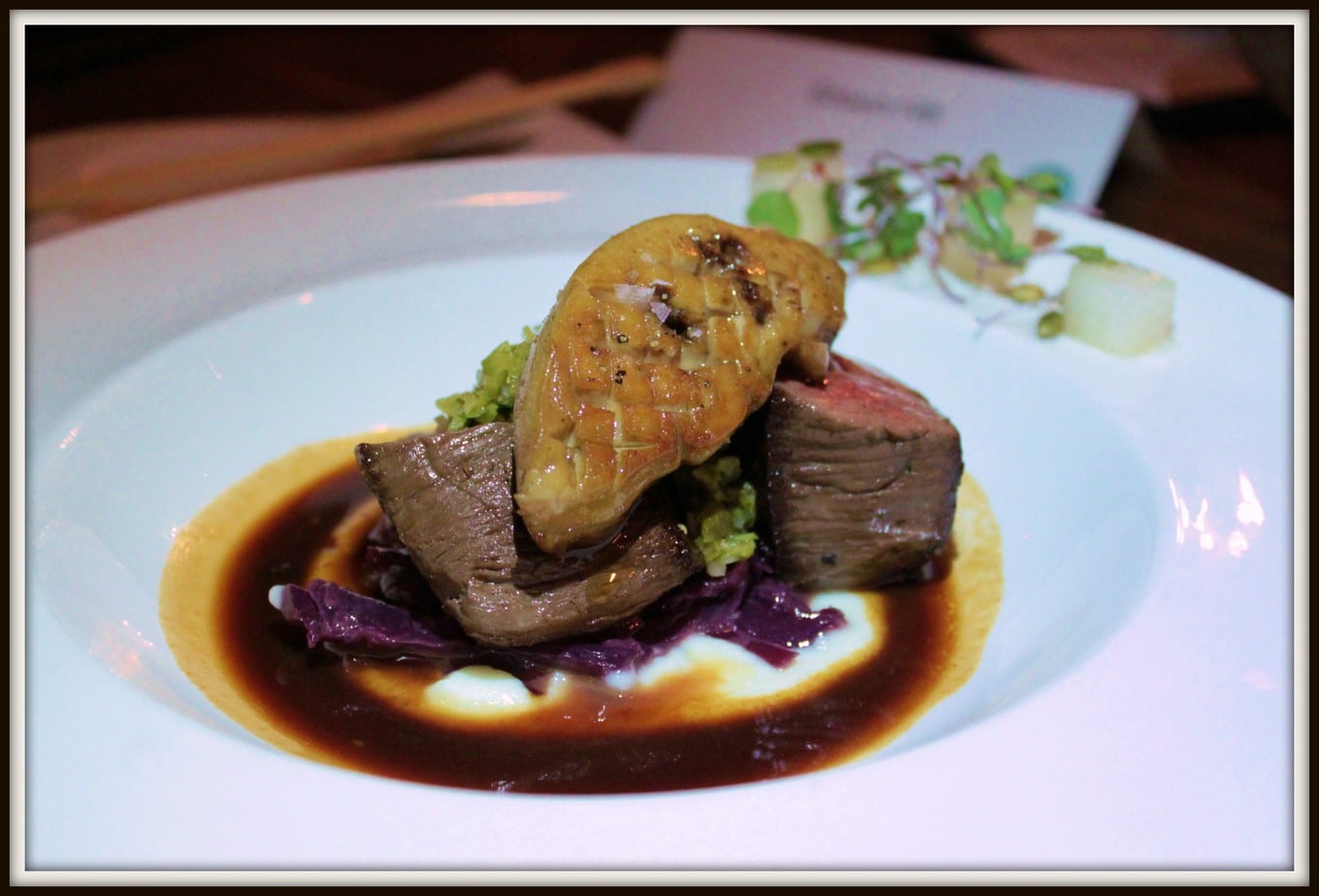 Chef Allemeier (Culinary Instructor at SAIT, former chef at Mission Hill Family Estate Winery, B.C.) was responsible for our fifth course, the Carrot Cake. I was surprised that we had something special in common concerning carrot cake; we both had it for our wedding cake. His version was quite nice, but way too small!  I thought the coconut foam (not shown) and hazelnut poo were nice flavour addtions and the mascapone frosting was very delicious. In the past I’ve had ‘carrot crisps’ that were anything but crispy but I am pleased to say this carrot crisp was as advertised. My only area of concern was when the sugar from the hazelnut became hopelessly stuck in my teeth. I was a little nervous my dental work wouldn’t hold up.  This dessert course was paired with Gehringer Brothers Riesling Ice Wine Signature Series, 2012. 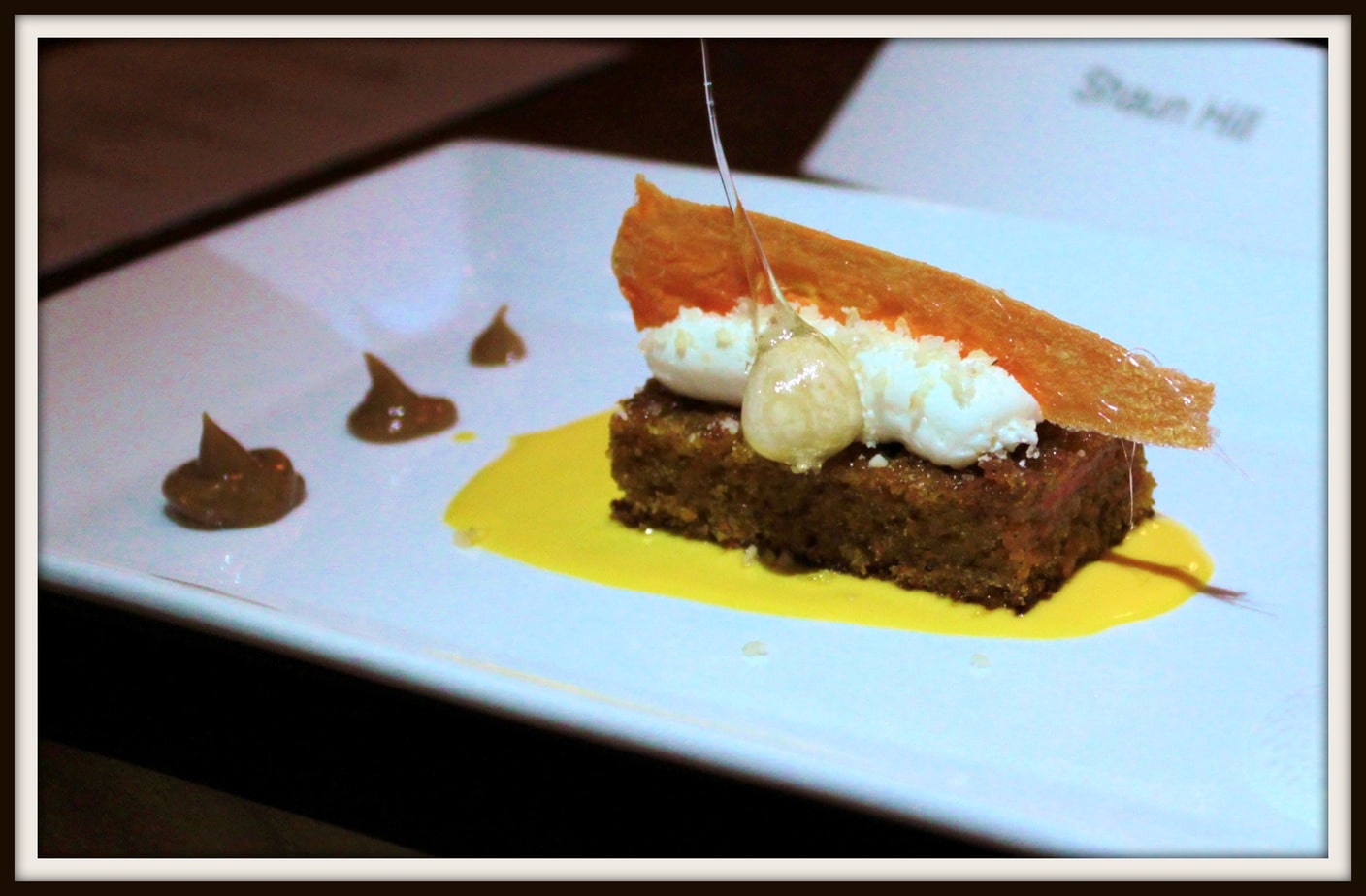 Our final bite of the night came courtesy of Chef Megan O’ Connor.  It was a bit of a fun poke at the life of a chef; cooking food all day then going home and eating nothing but cereal. All night we were speculating just which breakfast cereal would be featured in the ‘Breakfast Cereal Macarons’. My new friend Emily voted for Captain Crunch or Cornflakes but I was leaning more towards Count Chocula.  I knew it could be anything from All Bran to Fruit Loops. I was not surprised when the macarons were brought out and were topped with Fruit Loops. I don’t know how Chef O’ Connor got so much flavour in the macarons, but they were super fruity! I had mine with a very delicious latté. 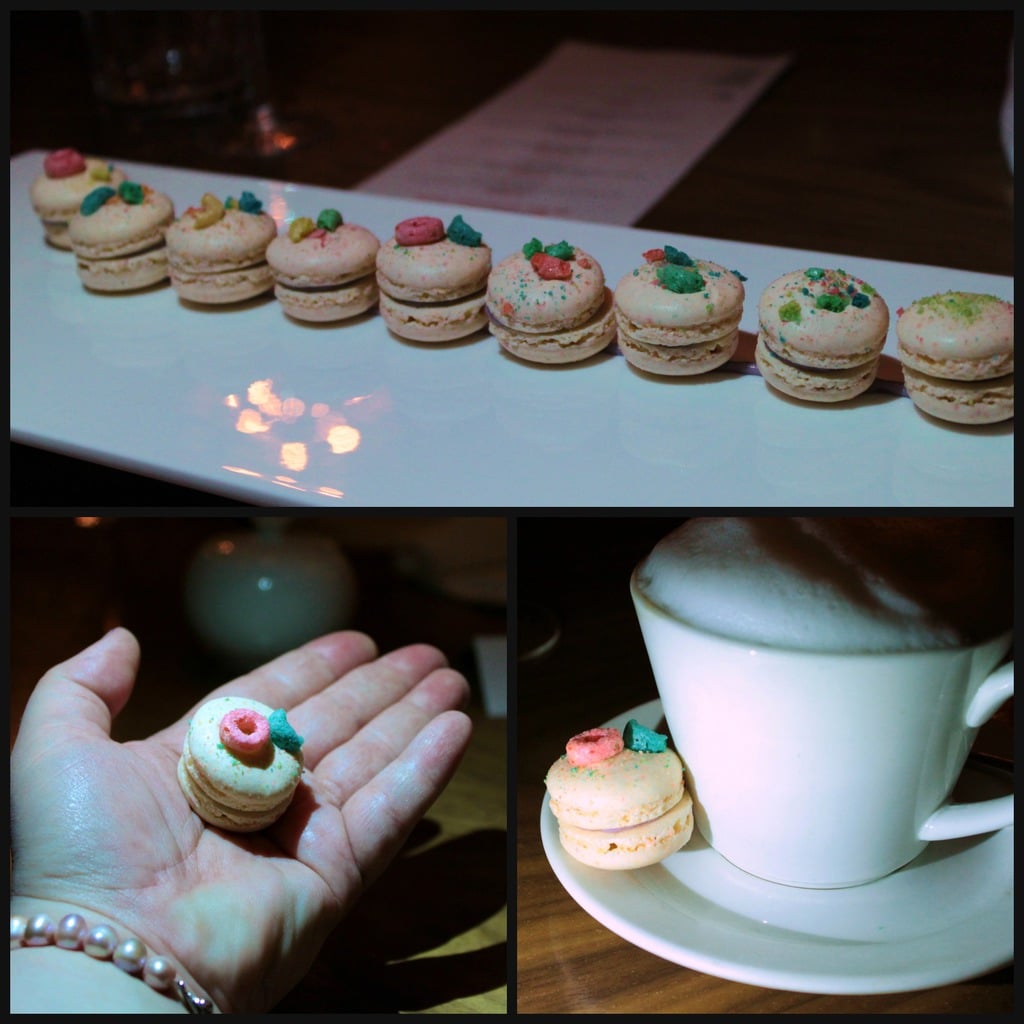 It was an amazing night and I have to thank ‘Iron Man’ John Gilchrist for being an excellent emcee for the evening, all of the wine representatives that came out to announce their wine, and last but not least, Chefs Allemeier, Ly, Groves, O’ Connor, and MacLean.

Wild About Mushrooms at Hayloft Restaurant