This past weekend was the first weekend we could wear shorts all day long, without freezing of course. Temperatures ranged from 14 C to 27 C and I’m pretty sure some sort of ‘yardwork followed by barbeque festival’ was taking place in my neighbourhood. My first stop to officially kick off the weekend was the Calgary Farmer’s Market. I had heard through the grapevine (okay on Facebook) that Fiddleheads were available. Since they are very seasonal I decided to make a special trip just to pick some up. Of course I  may have also make a slight pit stop at Eclair de lune to buy some amazing almond croissants and pain au chocolat…The owner recognizes me now which probably means I have a bad habit and it’s time to move on.

Next stop, the butcher to get some steaks. Thanks to the Trevor Bird event at Jerome’s Appliance Gallery, I was less afraid to pre-season my steaks. Trevor explained the importance of salting your steak an hour or so before you grill it as well as having it tempered (at room temperature) before it hits that hot grill. You weren’t there, so here’s a great cartoon-y explanation  from steamykitchen.com:

All of you who season JUST before grilling – this is what you are really doing to the meat. Did you know that? All the water comes to the surface and if you don’t pat super-dry, you’re basically STEAMING the meat. Plus, your salt just sits on the surface of the steak, leaving the interior tasteless.

Now – note that only a little of the salt gets to go back into the meat. Don’t worry – you aren’t going to be eating all that salt! Bourbon does that to me too.

I can hear it now..BUT!!! What of all the water that stayed on the surface of the meat? Aren’t you drawing all the moisture out of the meat? Will it taste like a salt lick? (*%!*%[email protected]#!#!!! I DON’T UNDERSTAND THIS STEAK RECIPE!!!

Pull your pants back on and keep reading… Now onto the fiddleheads. I was unsure how to wash and cook them so I looked it up on the Health Canada website. I found that both soaking them in a sink of cold water and washing them under running water got rid of most of the brown coverings. Next, I brought a pot of salted water to the boil and added the fiddleheads. I boiled them for about 7 minutes which is less than the recommended time. I didn’t want them to get mushy and over cooked because after boiling them I was going to stir fry them with some mushrooms.  For the most part they were cooked through, only one or two of mine were slightly crunchy in the very centre. I didn’t add anything other than salt and pepper to the stir fry, though later we did add a splash of lemon as we were eating. 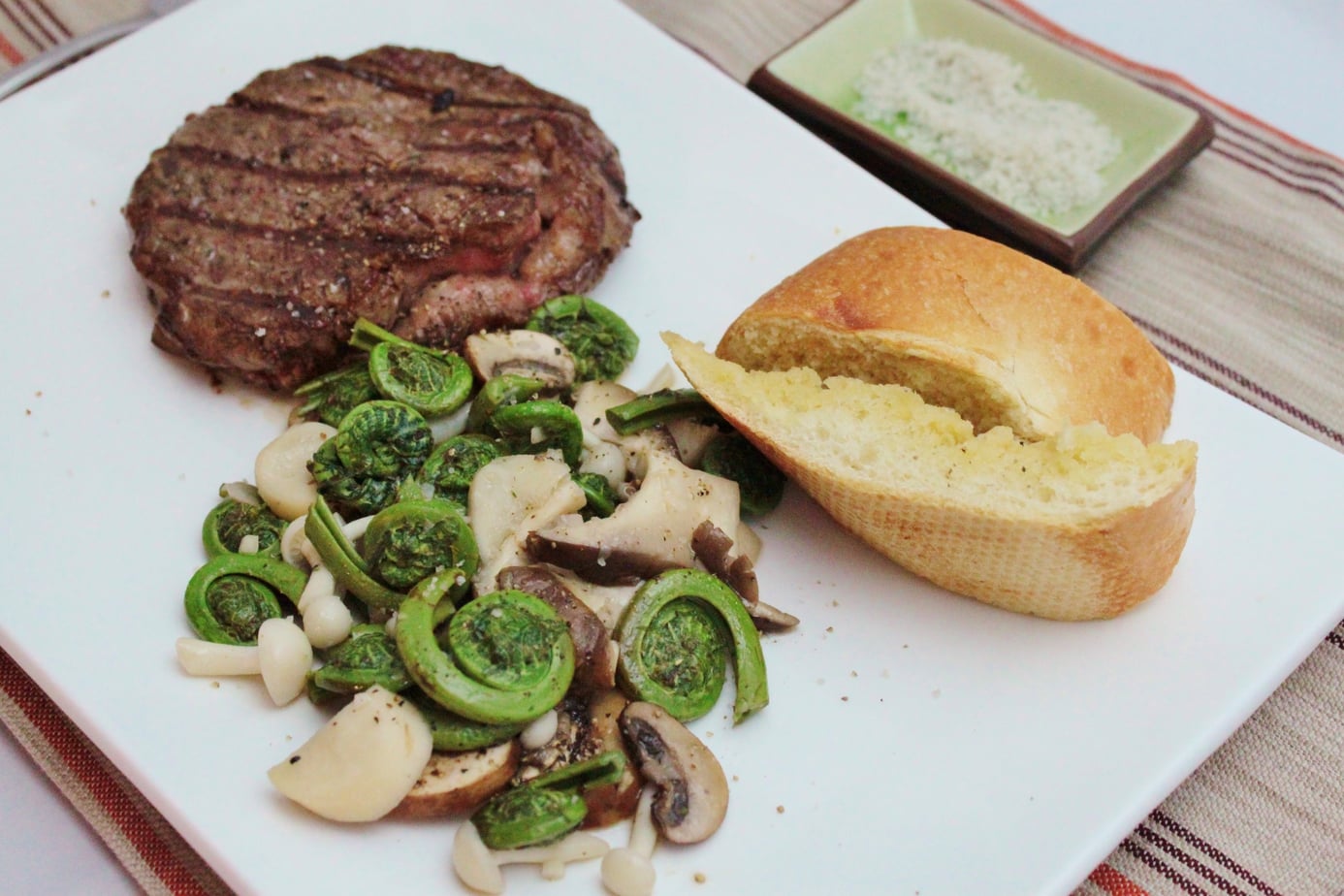