Seventeenth Avenue Southwest Calgary is an avenue filled with many delicious places to eat. I don’t often find myself in the area, but when I do I usually like to try a new place every time. This is sometimes a very difficult thing to do, especially when you’ve found a place with food and service that are top notch.  Have you ever left a restaurant at lunch and wanted to go back immediately for dinner? I’ll admit that I have. My dinner experience at Khao San Thai has left me with a permanent yearning for their Thai food. Located on the far west portion of 17th, it may be often passed over if you are driving from East to West in favour of Cilantro, Cibo, Una Pizza, Brava Bistro, Farm, Model Milk. And those are only a few of the amazing restaurant choices on the avenue. But if it is true Thai food you are after, make an immediate beeline for Khao San Thai.

Upon arrival I noted that I was the second occupied table in the restaurant. I was greeted immediately and allowed to seat myself near the window on the cozy upholstered bench. A glass of water and the menu soon appeared and that’s when I already knew would have to come back again someday. There were more than enough choices on that lunch menu to riddle me with indecision.  Slight in-tolerances to both zucchini and squashes (including pumpkin) left me with a conundrum. Either I could try a Green Curry with zucchini or a Red Curry with pumpkin. Or I could go a different route and just have Pad Thai. A glance outside, followed by a shiver meant that I was pretty sure that I wanted a curry of some sort. I chose the Red Curry, pumpkins be dammed! I would have to hope that the pumpkin was cooked through enough so that I could eat it. For some reason, cooked pumpkin does not bother me but I do get a rash from carving pumpkins and also an itchy mouth from eating slightly cooked zucchini. I can (fortunately) eat pumpkin pie, loaf and zucchini bread with no problems at all. As I ordered I realized that I should probably return to the freezing cold to go plug the parking meter as it was soon to expire. I explained my situation just to make sure it didn’t look like I ordered and ran. When I got back, I had just enough time to get comfortable before my curry arrived. 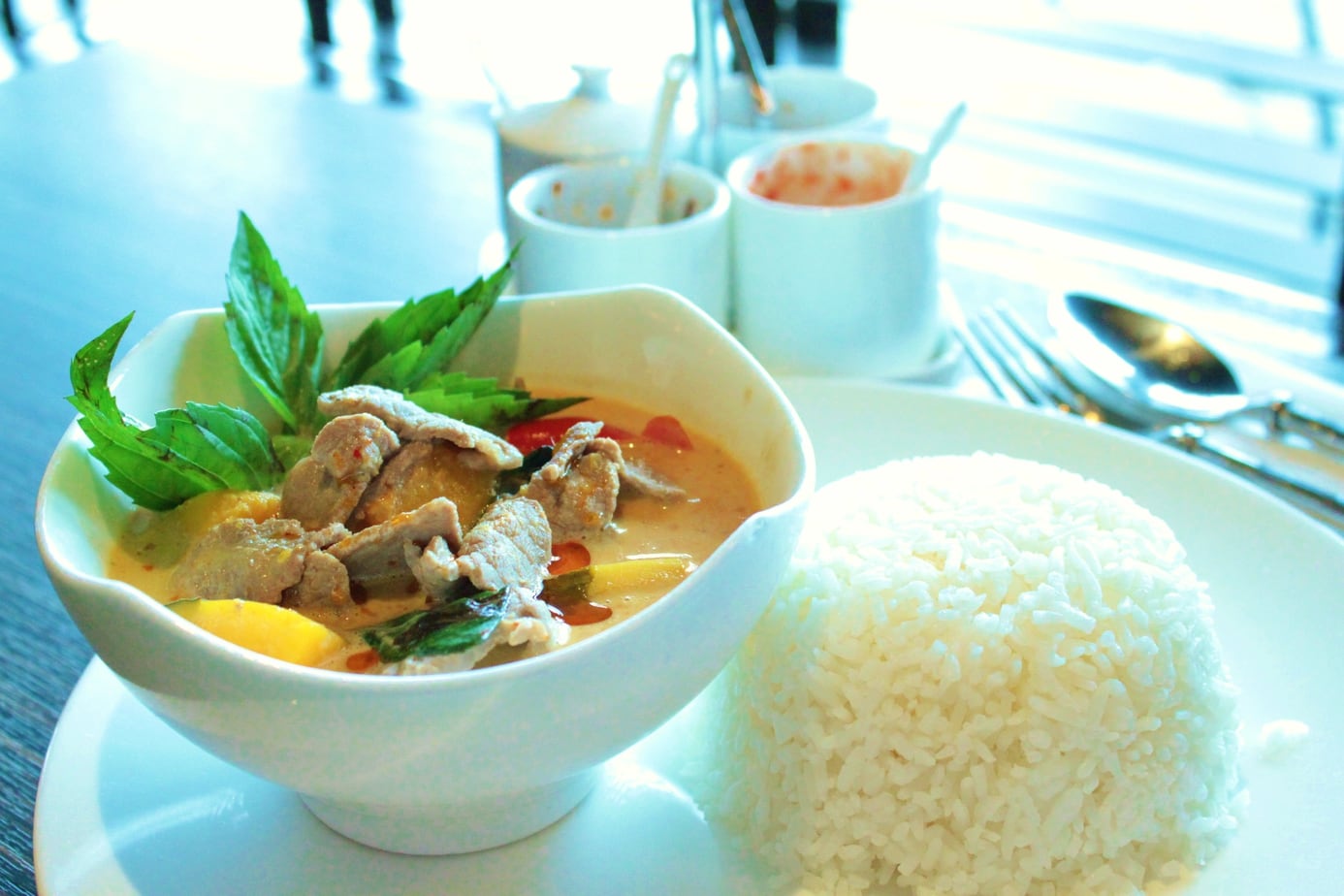 I’m gonna be honest, it made my heart go pitter patter. The server also brought me a trio of various pepper preparations to try with the curry. Dried, crushed chilies, chilies in oil, and chilies in a vinegar base. For a bit more saltiness there was a fourth condiment, fish sauce. I chose the chilies in vinegar and loaded up. The curry was quite sweet, so it was nice to have an extra punch of chili flavour in there as well. When I left my mouth was still ‘singing’ chili praises. Or so I thought. I realized later that it was a bit irritated from the pumpkin.

The service at Khao San Thai was very attentive. That said, it was lunch and not a very busy service. We had a good chat about Thailand and I found out he was from the North of Thailand. I made sure to say ‘Sawadee ka’ when I left.