Masterchef Canada, where Canadian home cooks come to shine…and believe me, they do shine! Calgary school teacher, Tammara Behl, is definitely one of the show’s shining stars at the moment. Besides making various appearances around Calgary (especially on Monday nights for MCC viewing parties) she recently teamed up with Chef Pedhirney of Muse Restaurant to create an influenced tasting menu and viewing event.

I’m glad Hubby and I arrived early and didn’t have to scout for two seats together like so many other couples did. We also had a great view of the big screen and got to meet some really friendly ladies who know Tammara through her Pampered Chef ventures. I don’t think Hubby minded being the only male at the table at all…

I’ve said it before and I’ll say it again…I love attending foodie events! No one cares if you take several photos of your food (and sometimes theirs depending on the plating!) on various settings and with additional light sources. So when I took out my camera to photograph the various welcome bites I wasn’t in the least surprised that my new friend Chris also began taking photos. 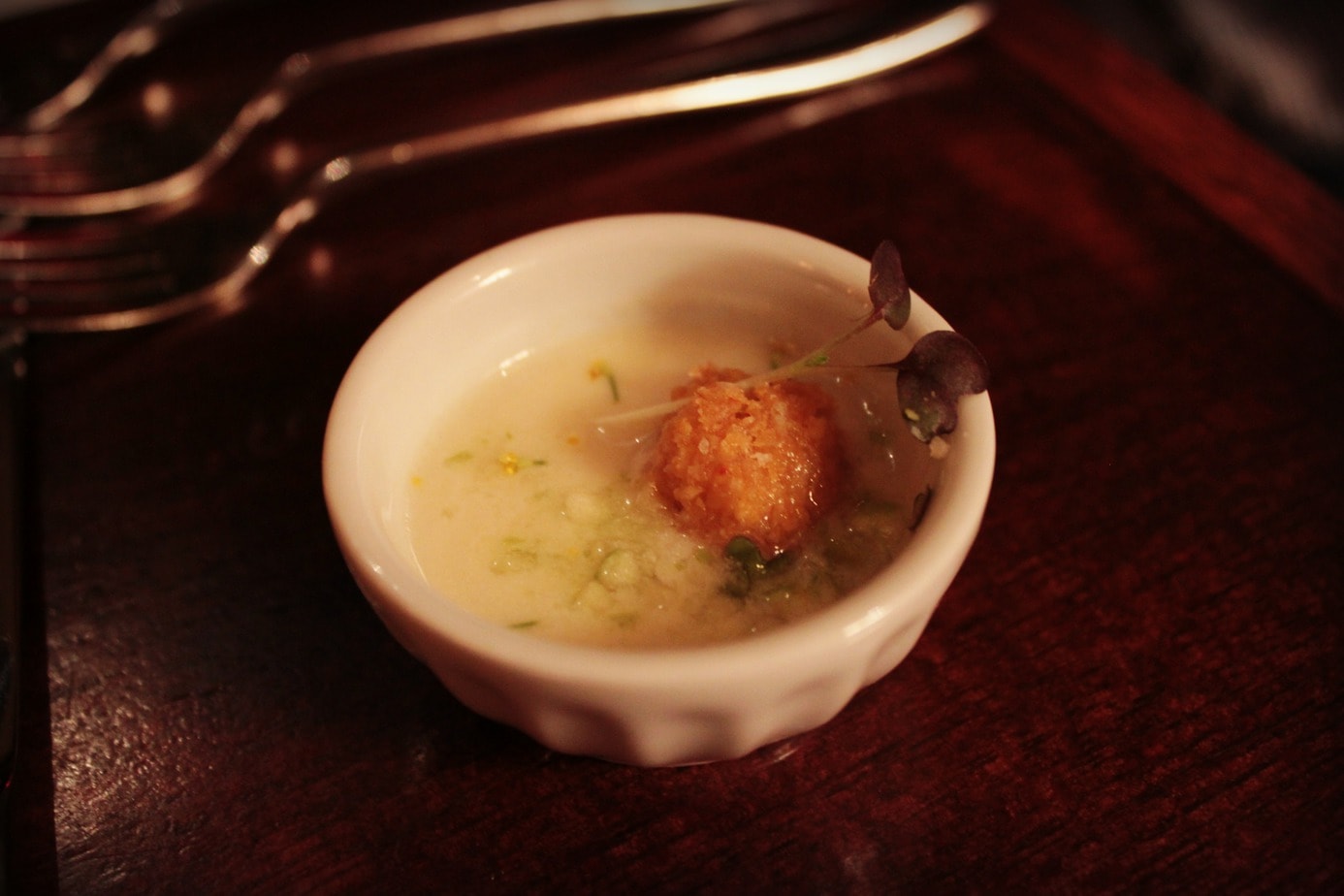 Fennel and apple soup with a tiny matzo ball 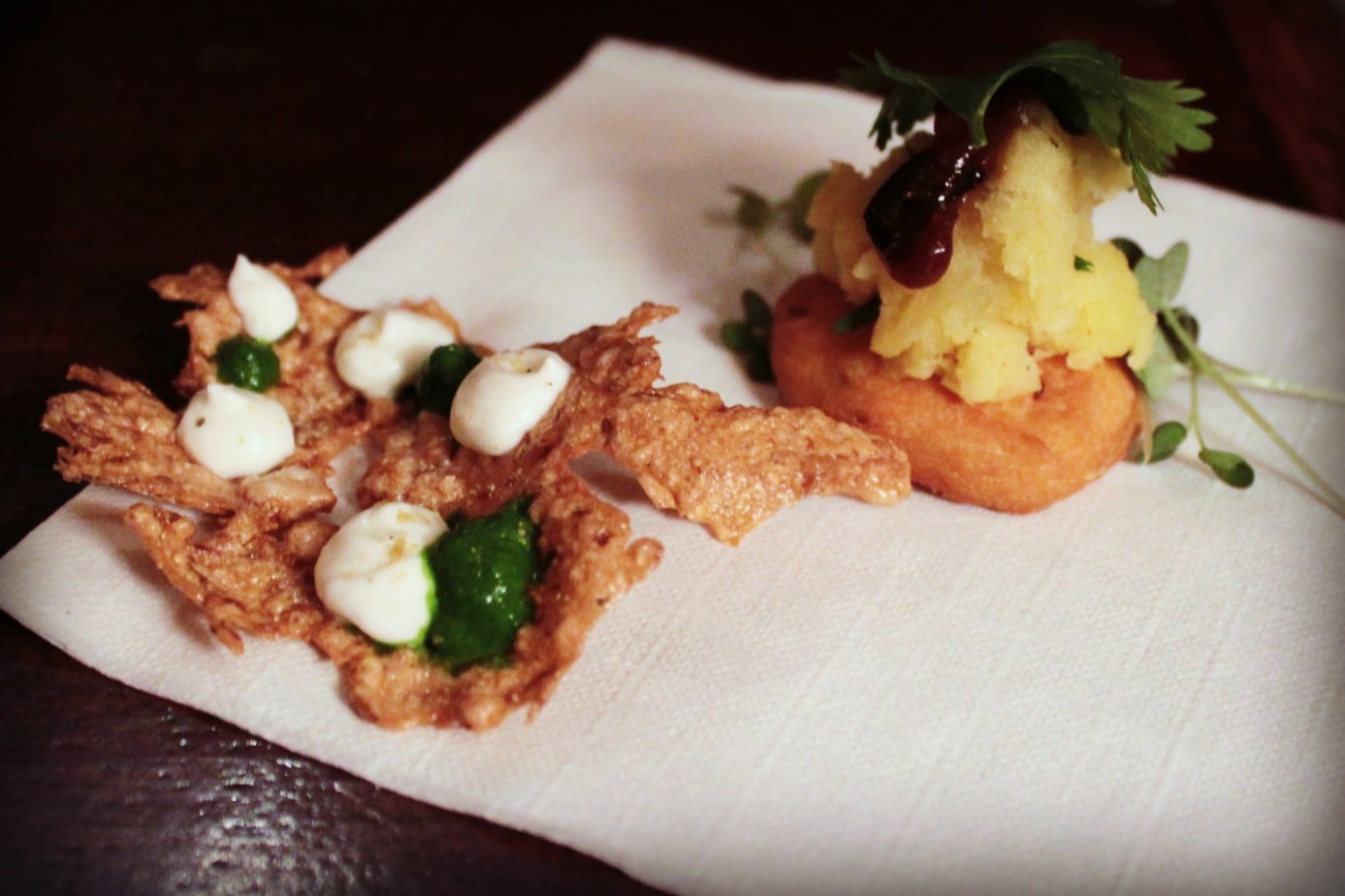 Arriving early does have other advantages…Hubby and I both took advantage of Muse’s cocktail menu with myself ordering a Chunnel (Gin, St. Germaine, and Pineapple Juice) and Hubby a French 75 (Gin, Cointreau, Champagne). It was funny because it came in a champagne flute so the server just assumed it was Chris’s based on the fact she was a women. I waited until the server was gone to move it for him, just to preserve his manhood!

With everyone seated and well watered our first course was served. I have to say that the minute I read this menu, I knew we had to attend the event. Everything sounded so well thought out that I knew the dinner was going to be amazing. The asparagus salad with pecorino, truffled mushroom purée, lemon vinaigrette, and egg yolk delivered so much flavour. The tender spring asparagus was tied in little parcels set a top the pavée of mushroom purée. This dish was packed with umami and was an excellent way to start the dinner. 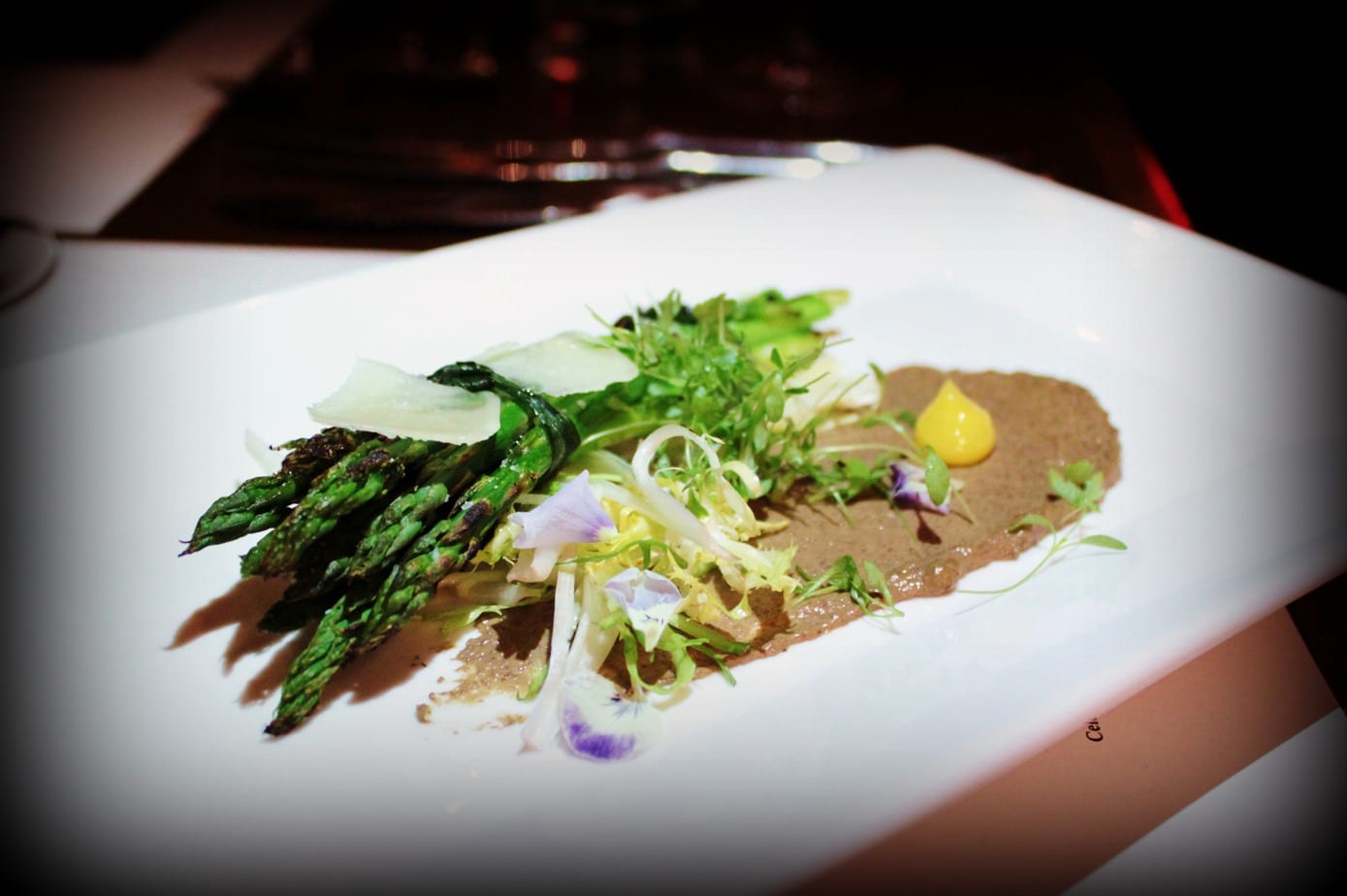 Since it is Spring, Halibut has been making an appearance on many restaurant menus. So far we haven’t had any halibut this year but I’m glad we chose Muse as the place to have our first 2014 halibut experience. Though our pieces were of various thicknesses, both Hubby and I were very impressed with how perfectly they both were cooked. 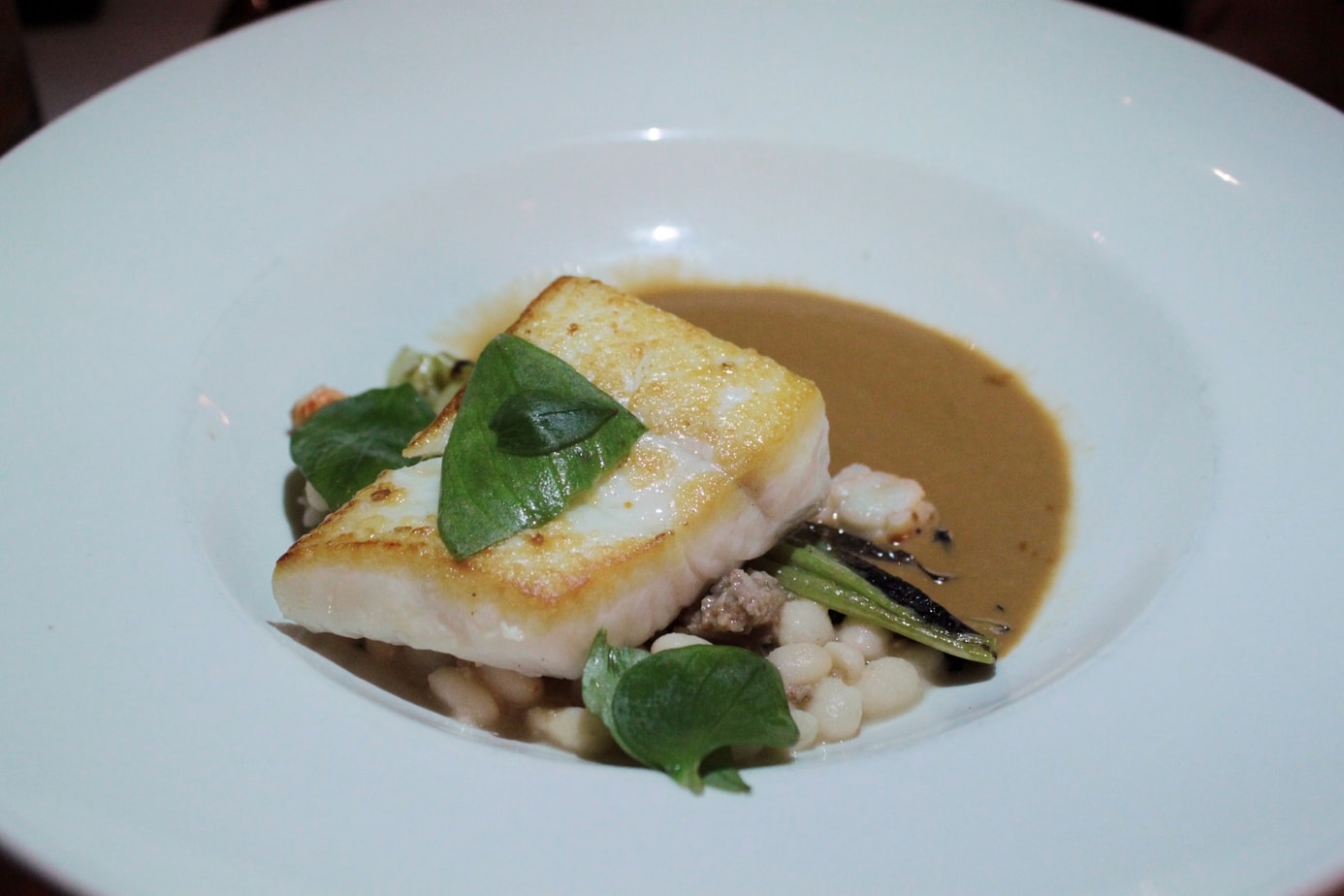 The spotted prawn bisque was a perfect way to serve the fish and bean combination. I didn’t really taste much of the chorizo; but I enjoyed the prawns, the ‘miner’s lettuce’, and braised romaine in this dish. I loved the fresh and slightly bitter taste of the miner’s lettuce. I found this dish to be very thoughtfully prepared and seasoned. 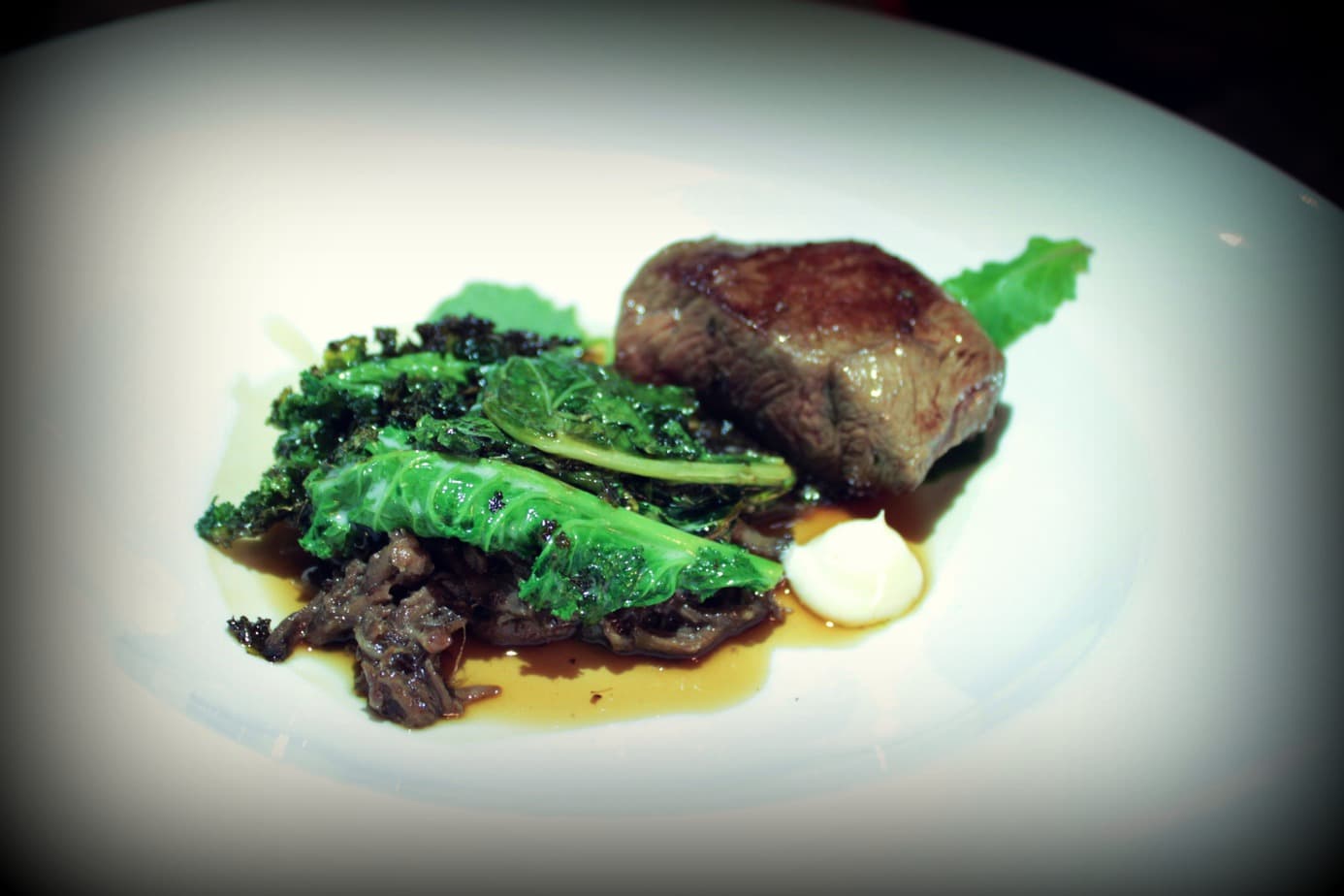 I had a difficult time warming up to the next course. Wagyu beef sounded great to me, though the piece that I received was quite thick and quite under cooked. I know that the kitchen aims to achieve a rare/medium rare on these flat irons, but mine was still cold in the middle and very difficult to cut and chew. Hubby was kind enough to play swapsies with me and his was cooked perfectly, very tender and tasty. As for all the other elements on the plate, they were amazing! I loved the well seasoned kale and the Oxtail and Maitake mushroom ragout was stellar. I could have had a whole bowl of that on it’s own.

Our plates were being cleared with about ten minutes to spare before it was Masterchef Canada showtime. We ordered cappuccinos, then waited in anticipation for our dessert which promised a special Chef Tammara component…the Nanaimo bar perogies from MCC episode 9. Dessert came just as we were about set to watch the opening moments of the show…perfect timing! 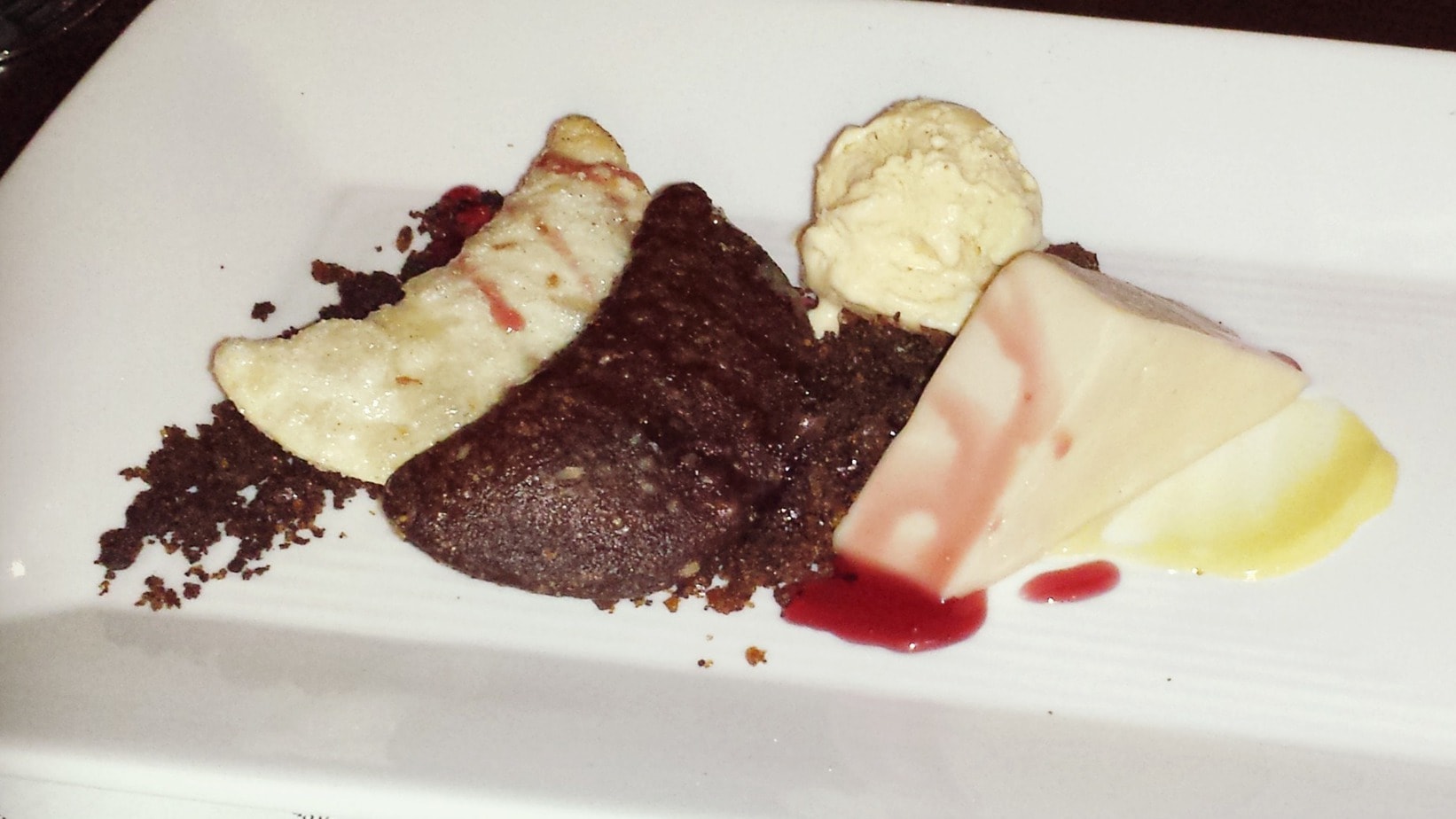 We  had a lot of fun watching the eleventh episode with the competitors first creating a lobster themed dish in thirty minutes. It was a tough challenge, but Tammara managed a win with her perfectly butter poached lobster on top of a Thai mango slaw. When I saw it, I was really hoping for a ‘surprise’ lobster themed second ‘dessert’ but it was not meant to be.

The episode ended with Chef Tammara surviving to fight another week on Masterchef Canada. We bid farewell to our new friends and waddled down the street to catch the next train home.