With the beginning of a new year, there have been a slew of new challenges proposed by various foodbloggers. A few of them have caught my eye, including one from Dana Sandonato (Killing Thyme) entitled ‘Recipe Nod’. Recipe Nod is a monthly challenge which involves cooking a recipe developed from an another (assigned) blogger and then featuring it on your blog. Quite a few of us from Food Bloggers of Canada have signed up and I’m anxious to see how everyone does with this challenge.

My assigned blogger was Chef Heidi Fink who has been teaching cooking classes in Victoria, BC since 1999. She has worked as Executive Chef at ReBar Modern Food and currently is an instructional assistant in the Professional Cook Program of Camosun College. I don’t know where she finds the time to write a blog, but it’s filled with inspiring recipes for a wide range of cuisines. Almost immediately, I knew which recipe I wanted to recreate in my own kitchen. The bright contrast of green in yellow of her Methi Murgh lured me in for good! I had actually been wanting to cook this dish for quite a while, but had never found a recipe that I was willing to try.

Chef Heidi’s recipe seemed approachable so I set out to find some fresh fenugreek/methi. You can make this dish with dried methi, but I really wanted to try it using fresh for the first time.  I was a tad bit worried that it was a bit too early to be looking for this pungent spring leafy vegetable/herb and in the end, I had to make a trip up to the far north east area of Calgary. I began at my favourite Middle Eastern market, Basha International Foods, and came up empty handed. I was a little worried that if they didn’t have it, it would be impossible to find! On a side note here, I was texting my Indian friend Lin all during the ‘Great Methi hunt’ and she was very concerned that I wanted to cook this dish. She never told me why outright (though she did tell me I would need a seat to myself on the bus), but eventually I came to realize what she was getting on about.

Back to the hunt.  Dejected, I decided to search one more nearby place for the methi; Superstore. You would think that as a chain, Superstores would all carry similar items, but no. Our Superstores in the South East of the city were all ‘fresh out’ of methi, which I took to mean that none of them ever carry it because of how demographics work in our city. As I walked in to the Sunridge Superstore, I was astonished to find the very first produce display ten feet from the door held a huge, fragrant pile of fresh green methi. The first thing I did was laugh out loud, then I proceeded to bury my nose in the pile and breathe deeply. It’s a wonder I didn’t get kicked out right then! I picked two bunches and went through the ‘express’ line. That’s a story for another day.

The recipe is pretty straight forward, though I did have some trouble because I halved the recipe.  I don’t have a really good blender so I attempted to make the ginger/garlic paste in my food processor. The amount was too small and it would not blend together, even in the smaller bowl. I gave up and threw everything into a mortar, where I pulverised it with a pestle. It was the same situation with the methi/cilantro mixture. If you don’t have a high end blender or something that will successfully blend a small amount (with little moisture), the old mortar and pestle is the way to go. Plus, it’s more traditional.

Eventually, the ingredients came together quite nicely and the whole house began to fill with the aromas of the dish. Actually, that’s putting it quite mildly…the whole house began to SMELL. I quickly ran around, shutting all the bedroom doors and put away the last of the laundry to keep it fresh. I texted Lin and she just LAUGHED at me while she explained that in India, this is one of many dishes that are cooked with the windows open. Unfortunately, this was not possible here in Canada during the dead of winter, so I think the next time I cook this dish it will be summer. I will cook this dish again, because we all enjoyed it quite a bit, but we do have some boundaries. Eventually, after a couple of days either we got used to the smell, or I ended up drowning it out by making a batch of Seville Orange Marmalade. I’m not sure which one it was but I can’t smell it any more. 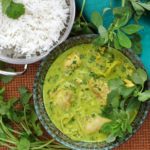 0.0 rating
A delicious and interesting curry best made in the summer with open windows.

It’s very difficult for me to follow a recipe exactly how it was written but I really wanted to recreate Chef Heidi’s recipe as closely as possible. The only real change I made was to reduce the peppers to one from the original three. Since my jalapeno had quite a bit of heat, I was very happy with the amount of spice in the final dish after this adjustment.

A Visit with the In Laws