When I heard it was almost time for the Rocky Mountain Wine and Food Festival to happen in Calgary I knew hubby and I just had to go this year. I’ve been to the festival once, probably at least seven years ago and we’ve never gone together. We’re not big ‘crowd’ people but the promise of all that delicious food and wine was enough to help us overcome that.

We arrived at the BMO Centre nice and early around 5:30. The first doors we went through brought us straight to the Cactus Club booth where they were offering Beef Carpaccio, Butternut Squash and Prawn Ravioli, and Tuna Tataki. SOLD! We ordered a beef and ravioli, each tried half and swapped. This became the regular method of the evening…The beef was great as there was a nice balance between the meat, the large capers and pickled onions.  The butternut squash puree was so smooth inside the ravioli and there was a nice splash of truffle oil as well. Can’t go wrong with truffle oil! 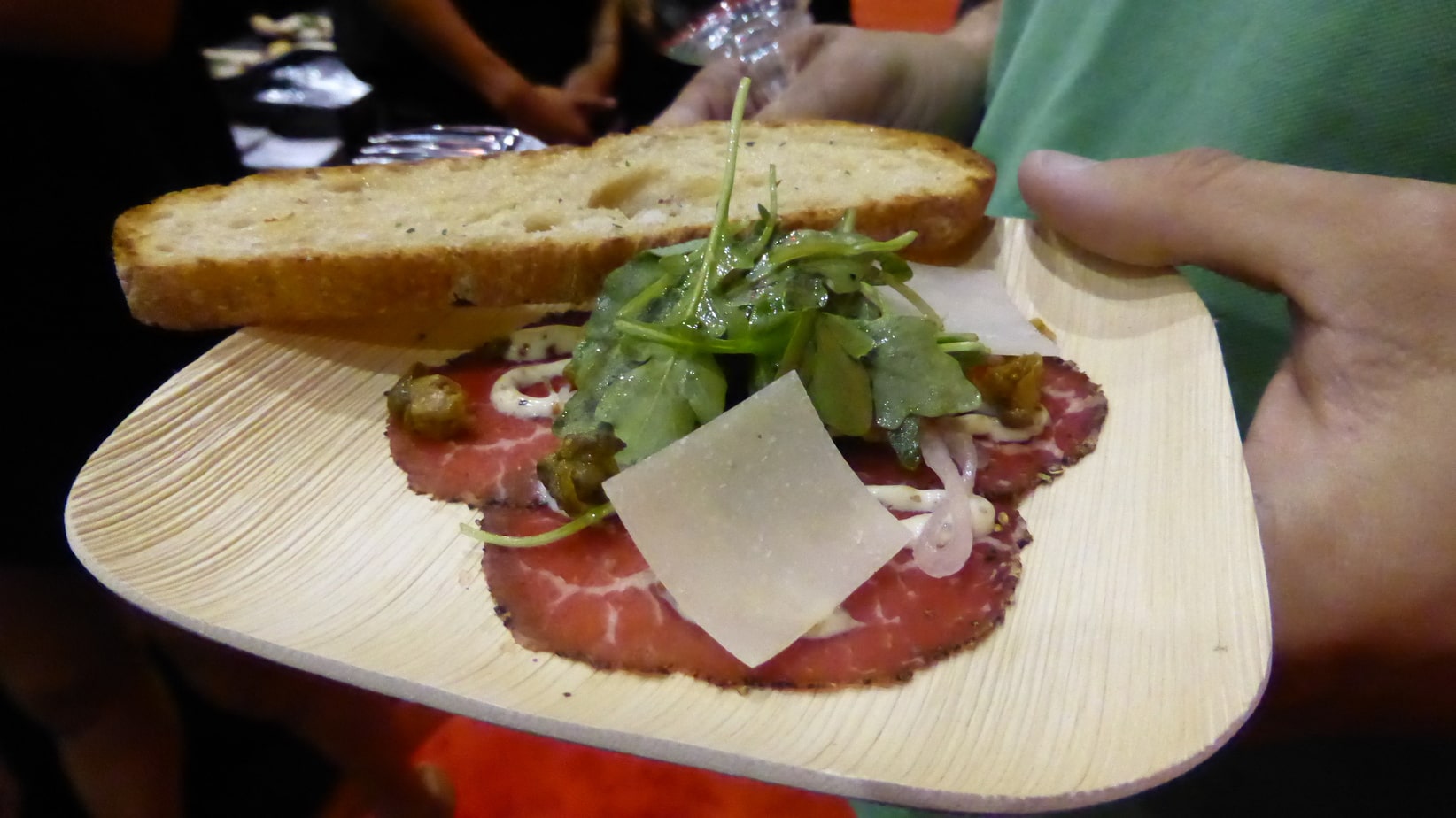 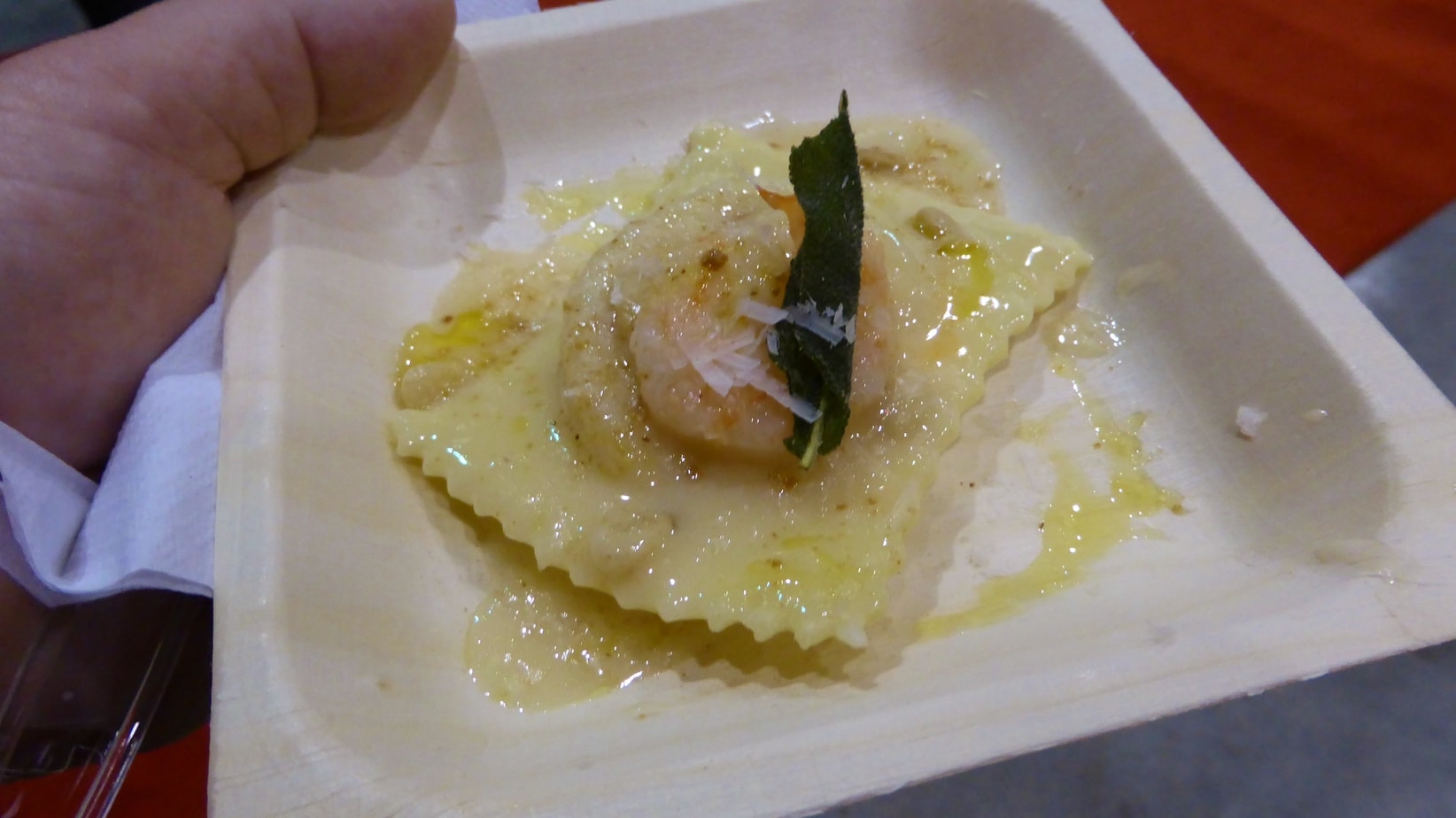 Next we followed our noses to the Swiss Cheese booth. Usually the nice thing about arriving early is that you can actually chat with the vendors but the guy at the Swiss Cheese booth was a bit standoffish. Whatever, I talked to him anyway because that’s how I am. They were serving gruyere fondue, raclette, and shaved gruyere made with a neat little circular cheese shaver that they call girolle. It is the french word for chanterelles or apparently cheese that resembles chanterelles. I think they look more like carnations.

We didn’t have a girolle but we did try the raclette. The section of cheese is melted from the top and then scraped onto the baguette. He even gave us the crusty bit that had been building up on the edge of the cheese. I guess he warmed up to me after all!

I think we hit our first wine stand after eating all that cheese but I didn’t really take pictures of most of our drinks…so you’ll have to believe me when I say we were well fed AND watered. I think I started out with a Ravenswood Zinfandel. I’m glad I got to try it so now I know I can stock up on it at Costco. Other wines we tried and liked that night were (in no particular order) Cigar Zin Old Vine Zinfandel (2011) and Waimea Sav Blanc from Vintage Wine Estates, Notorious Shiraz (2008) and Infamous Cab Sav (2009) from Australian Legend Wines, Adega de Borba Red (2011) and Terras d’el Rei (2011) which were two Portugese wines.  I know we tried more wines and I tried to keep info on all of them but failed.

During the course of the evening we ended up drinking more beer than wine and even had some spirits as well. I tried the Bakkon vodka in a Caesar which made me gag and shiver, a super sweet salted caramel liquer called Criollo, Chambord, and really great French gin called Citadel. If I ever find Citadel in a liquor store…it could mean trouble!  I think we hit the Belgian beer table next and stayed there chatting and drinking for quite a while. I had a Delerium tremens, Affligem dubbel, and a couple of others including a really nice cider. When I mentioned that I have a weakness for unfiltered wheat beer they sent us over to the German beer booth. There we tried the Konig Ludwig Weissbier which I really liked though it doesn’t have that cloves and spices kick you would get from a Belgian Weissbier. We also enjoyed the Warsteiner Pilsner there.

Okay back to food. We tried some delicious food from Sabroso Nuevo Latino Cocina, only opened at the beginning of the summer. We couldn’t decide so we ordered one of each appetizer on offer. Scallop and Prawn Ceviche, Tostones (fried plantain) with Black Bean Paste and cured Chorizo, and Arepas with Pulled Pork.  Besides the great food, the people were really nice. I definitely want to check this place out in the future. 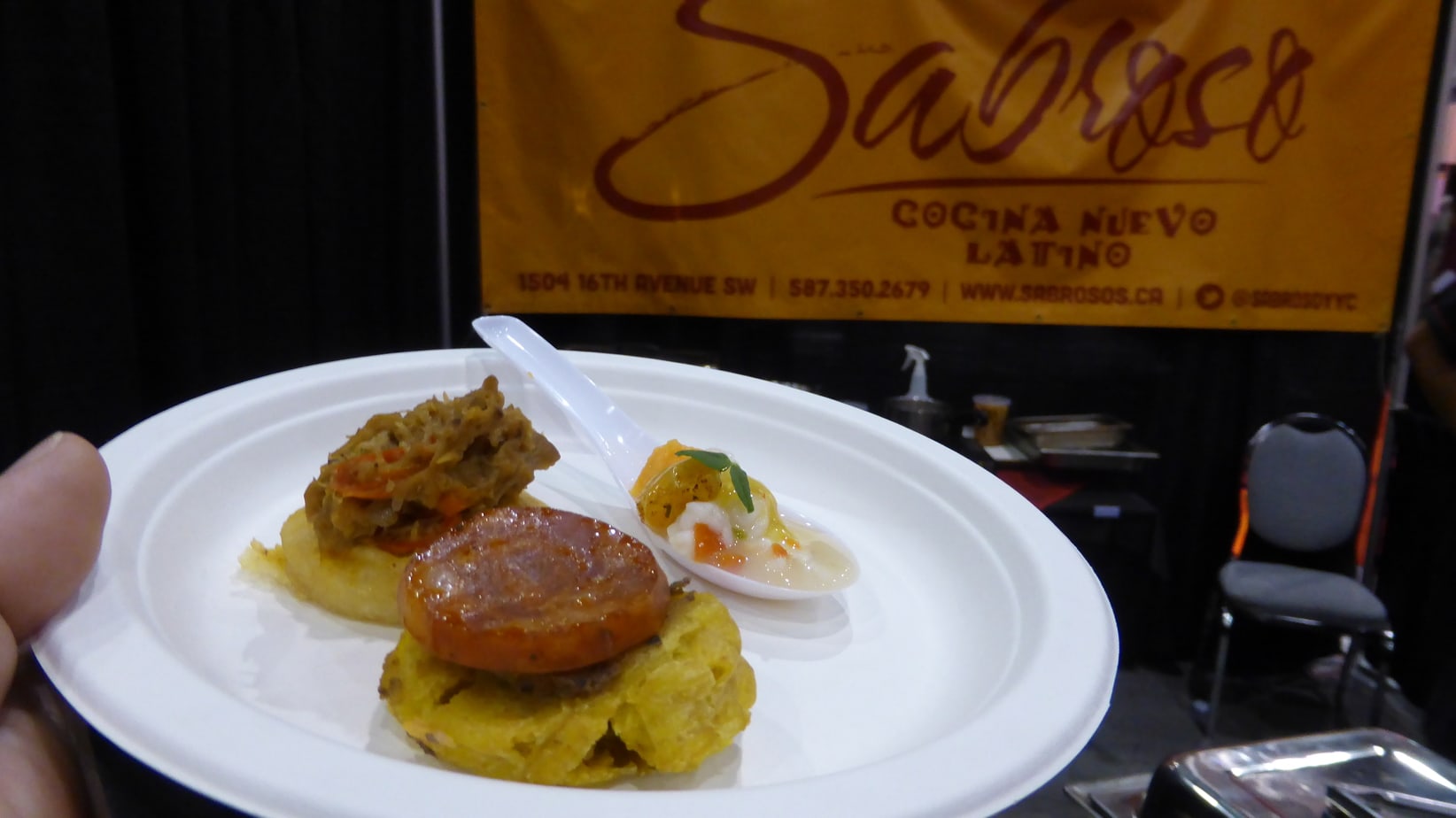 Next up we couldn’t pass by the Saltlik booth without trying something.  The crab and shrimp cakes were absolutely amazing! Hubby had the BBQ ribs and since those were super hard to share, I didn’t have to share my crab cake either. 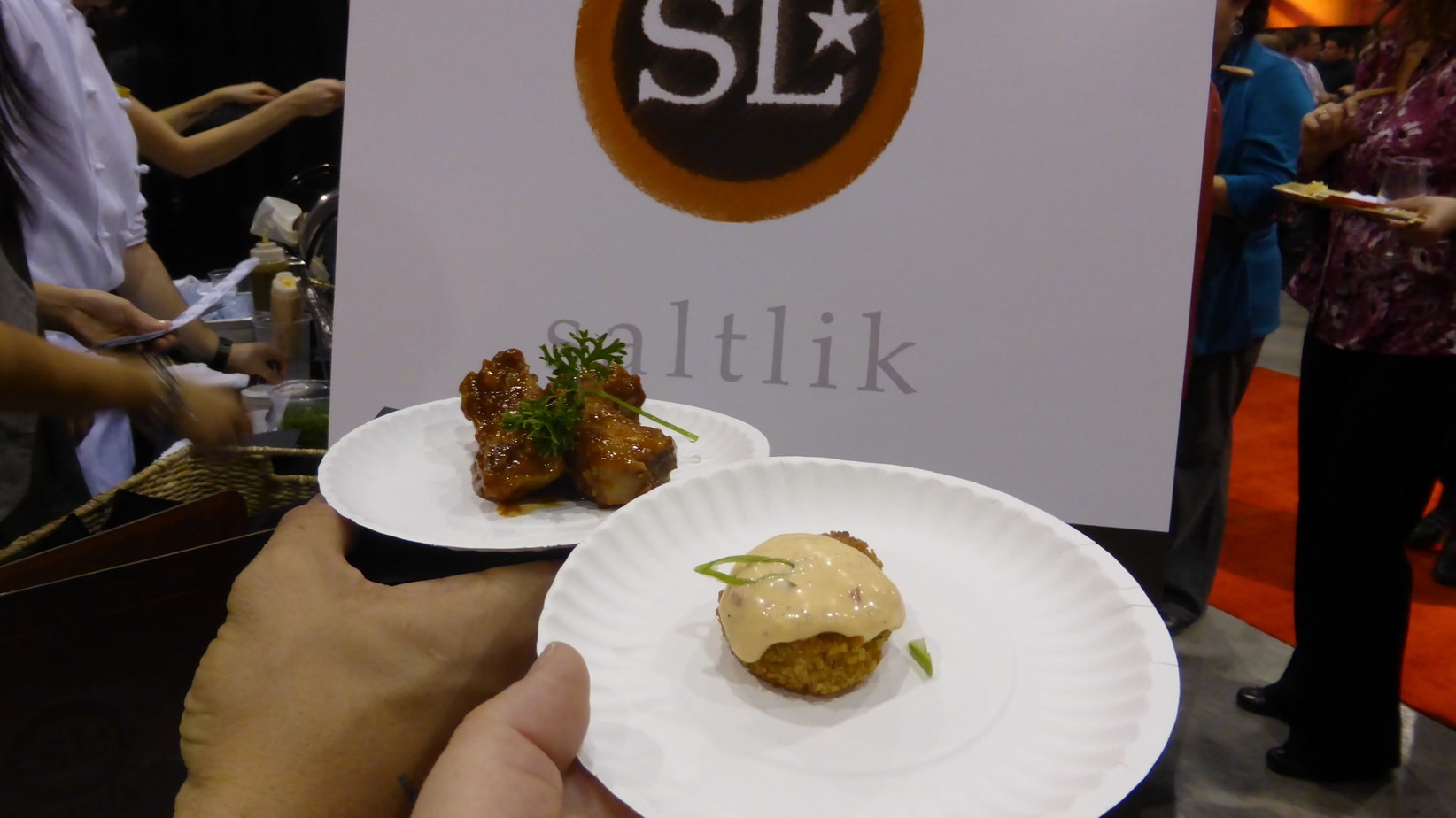 Then just around the corner, the International Hotel Suites were serving up San Choy Bau and some superb Beef Yorkies. They were so good that we specifically went back later to have another. 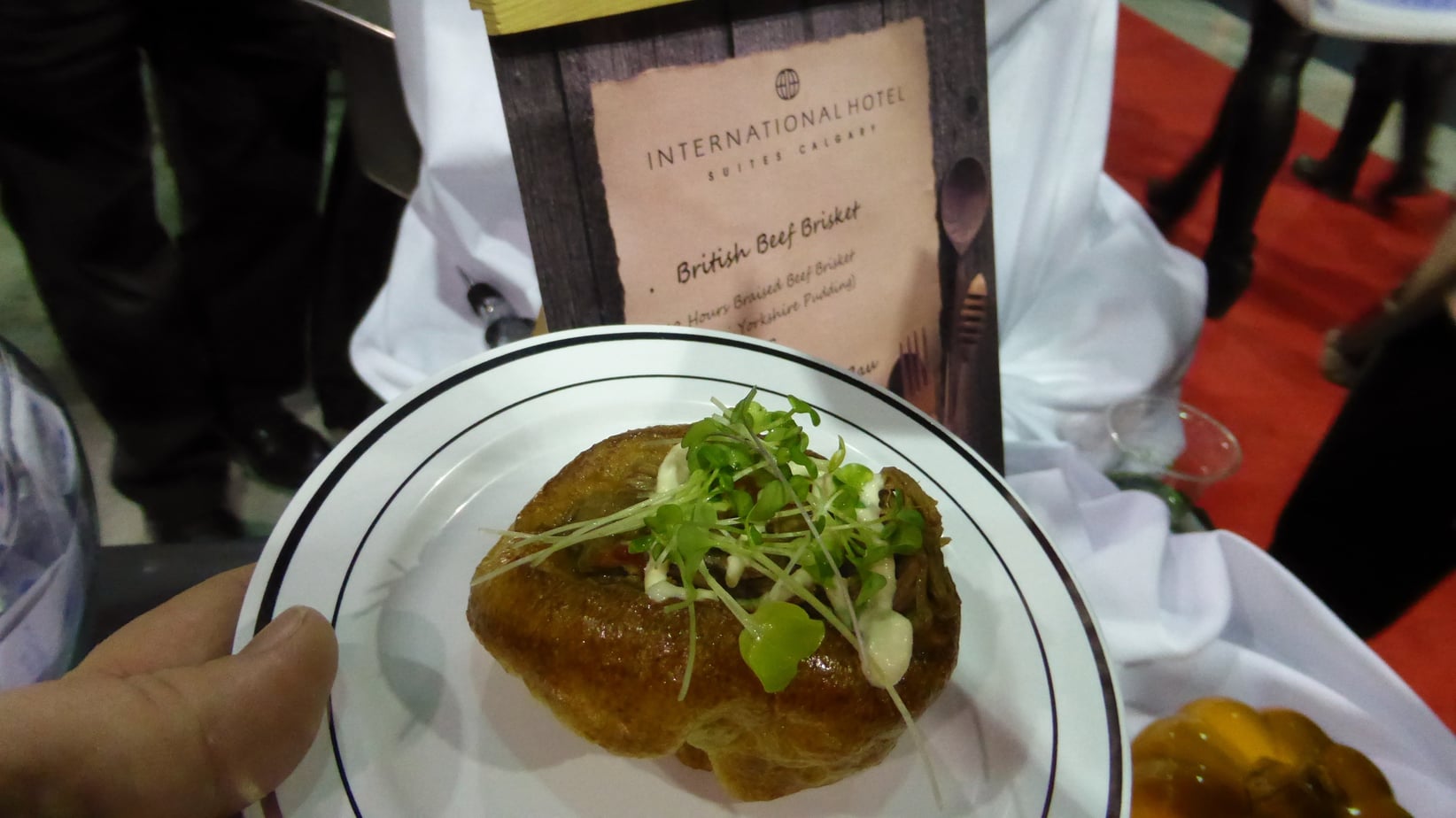 And funny how we always ended up talking with the beer people. I had a super conversation with the Big Rock guy where I basically begged him to consider re releasing Rosmarinus aromatic ale next year. He gave me this cute little Big Rock beer family tree which shows there are some great beers still to come for this year.

Phew! What a post so far. I kinda feel like a bit of a pig eating and drinking all of that and I’m really only half done! I guess it’s important to keep in mind that all food were small tasters and the alcohol were in sample glasses and not regular portions. Stay tuned for part two of the Rocky Mountain Wine and Food Festival…

A Taste of the Heartland – Stettler Long Table Dinner

A French Celebration at Cassis Bistro