Summer Weekend Freshness – From Vernon, BC.

My sister R has got it pretty good. She lives in the Okanagan aka ‘the Promised Land’ with access to all sorts of fresh fruits and vegetables. There is also the Armstrong Village Cheese Company, countless vineyards, and Rogers Flour Mill  nearby. Of course, I live in a larger city with access to all sorts of amazing restaurants and she is jealous of that fact.  I’m left to wonder why Vernon,  with such a fresh and bountiful food supply, has no decent restaurants. Surely she must be joking or maybe  in this case the grass is always greener on the other side of the mountains. Still, I think she has it best because many of her neighbours have fruit trees while both of mine merely grow weeds. Yup, I’m jealous. Well, there is that house for sale just a few doors down from her….

Since our visit was highly last minute and occurred mostly during the week,  my sister and her hubby had to work. They felt bad about leaving us alone, but kid number two and I had a great time just being somewhere else for a change. We did do some traveling and food finding but we were also glad just to have the hot weather and lounge around a bit. We took care of dinner on a couple of nights (which is super hard to do in someone else’s kitchen and when they are on a special diet) and I think we did okay. My sister doesn’t eat a lot of carbohydrates or refined sugars so we had to be a bit more inventive. One night I roasted mostly husked corn on the barbeque to make my chili-lime corn salad. It was pretty delicious due to the addition of some really neat ‘lemon chili powder’ I found in her cupboard. Maybe cooking in someone else’s kitchen isn’t so bad after all! 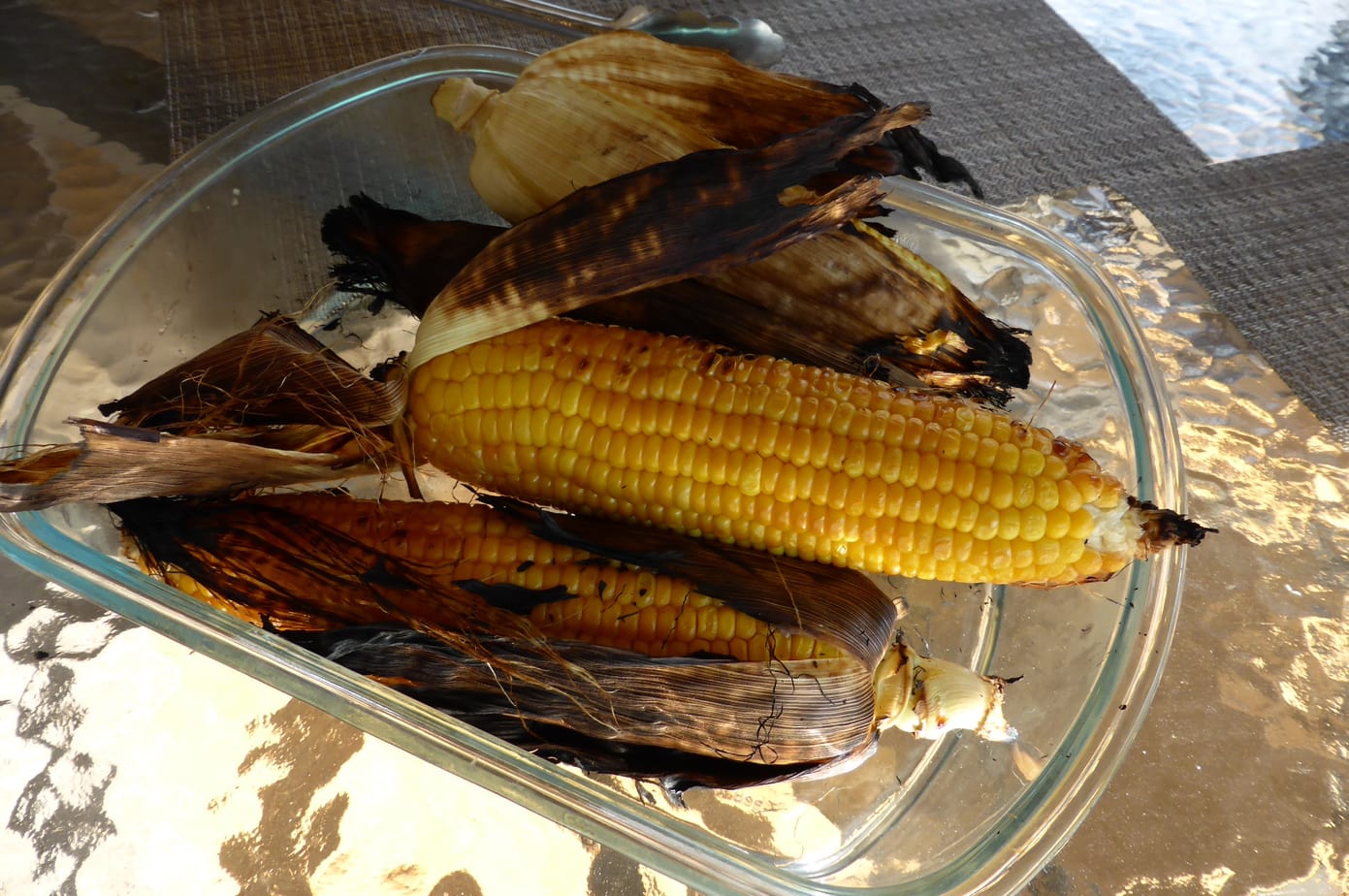 Peel the husks away from four cobs of corn,  until you have only one layer left. You can soak it for a bit or just throw it on the barbeque like I do. Of course then it usually starts on fire. No worries. Just move the cobs up to the top rack and let roast for about 10 minutes. Take them off and let them cool slightly before you peel the rest of the husks off.

Meanwhile, finely dice red onions, red or yellow sweet peppers, and some de-seeded tomatoes. Chop up some fresh cilantro and throw it all into some sort of a container. If you’re lazy like me you can use the same one you used to bring in the smoldering corn. I bet you could throw in some drained and rinsed kidney beans/black beans if you wanted to. Make sure to add the corn, after you’ve cut it off of the cobs of course!

I drizzled lime juice all over the chopped ingredients as well as some olive oil. Then I seasoned with salt and pepper and added a teaspoon of cumin and a tablespoon each of chili powder and special lemon chili powder my sister had. Good stuff. Just keep on adding and tasting until you think it’s right. If you like chilis or jalapenos, add them too. Super easy.

I’ve also made this for an appetizer where I added little salad shrimps and served it in a half of an avocado. 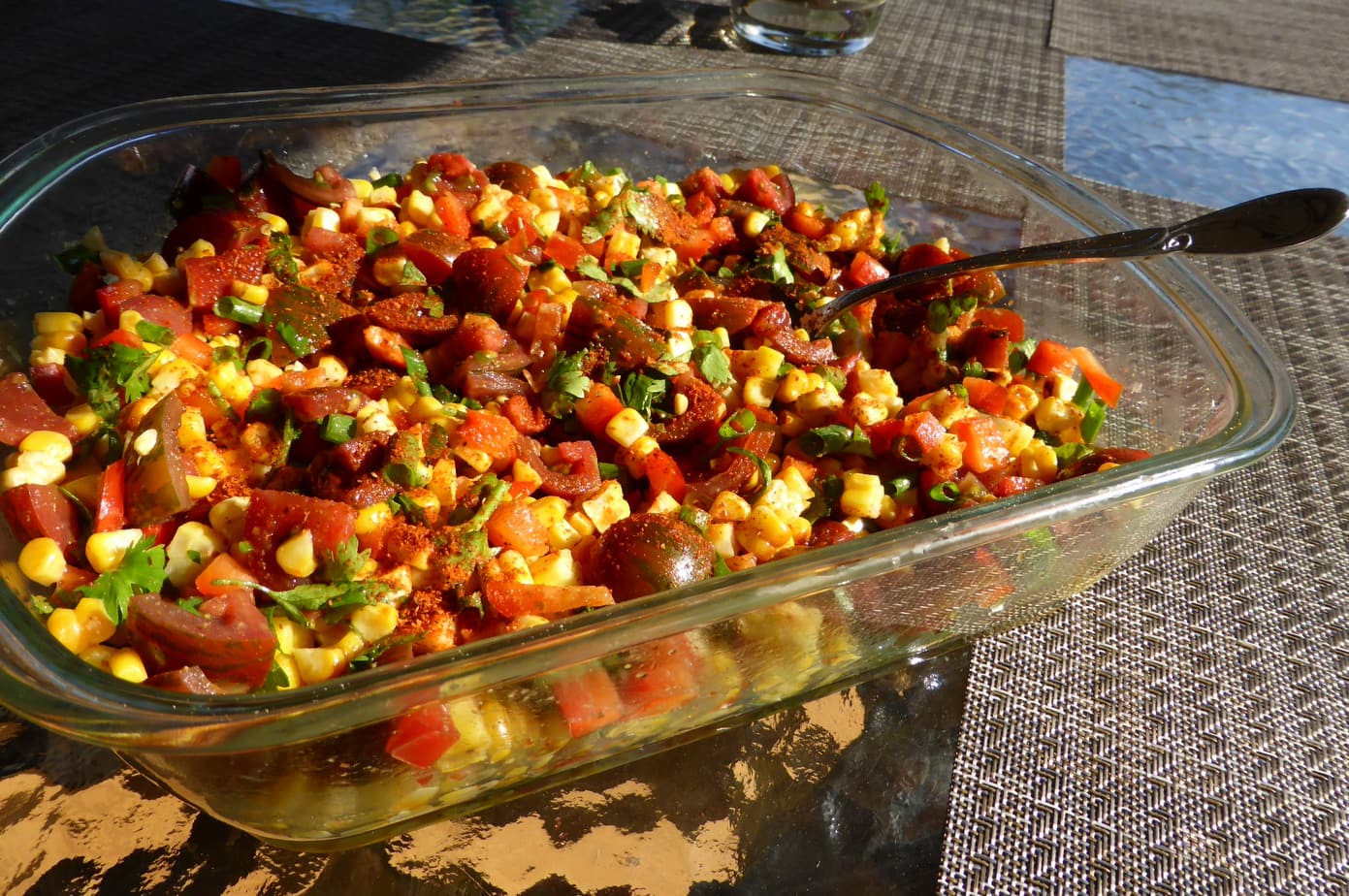