Anyway this friend, we’ll call him Geoff (because that’s his name) really liked to putter around in the kitchen He wasn’t chained to the barbie like most Aussie men (oooh, got my funny pants on today!). One day Geoff posted the gorgeous dish of Sweet Potato Gnocchi with burned butter sage that he made his wife. That had my attention right away and I was impressed that the dude can COOK!

Making Sweet Potato Gnocchi has been on my mind on and off for about 3 years. After having great success making regular gnocchi I got re-inspired by all those great sweet potatoes in the shops. I knew it was finally time to give this beautiful and impressive dish a go.

Sweet potatoes do not grow in Canada. They weren’t readily available in grocery stores when I was a kid so I didn’t try them until later in life. How could anyone NOT love sweet potatoes?

With all of the sweet potatoes dumped out onto the counter, I kneaded in flour until the mixture became a cohesive dough. Since I started with three good sized sweet potatoes I may have used around 1 1/2 cups of flour. I did also add some freshly grated pepper and salt to the mixture.  Keep your work surface well floured and you shouldn’t have any sticky dough problems.

Next, I divided the dough into four and rolled each bit into a long rope about 2 cm wide. If you like your gnocchi a bit smaller, make the ropes a bit thinner. 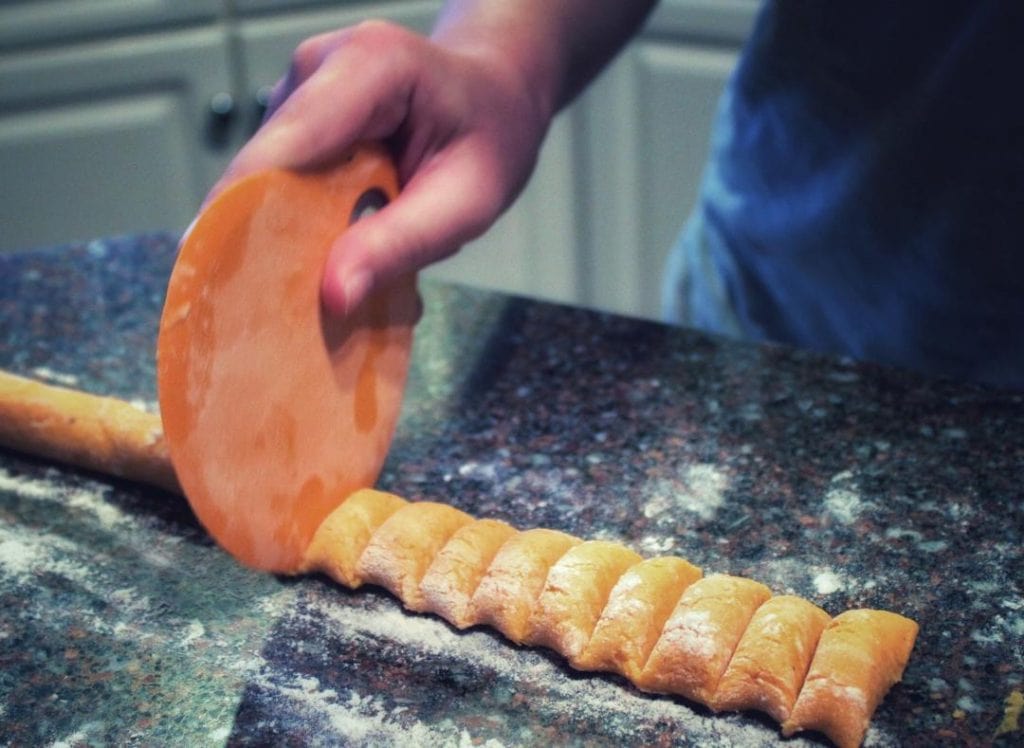 For the next step I enlisted the help of kid number 2. I figured she would be a good hand model while I took the action shots. She’s also pretty smart so she caught on right away to the gnocchi shaping.  My kids all really love gnocchi so this wasn’t too much trouble for her. We started reminiscing about when her grandparents took all three kids to a nice Italian restaurant and grandpa ordered the ‘gah-naw-chi’. Oh, they were slightly embarrassed but made sure to wait until the server was gone to correct grandpa’s pronunciation. Now every time we have gnocchi the story gets retold and we all have a chuckle at grandpa’s expense.

To shape the gnocchi, she rolled the piece of dough in her hands until it was an oval shape, then used a fork to indent one side. The ridges created by the fork help to hold the sauce on the gnocchi. 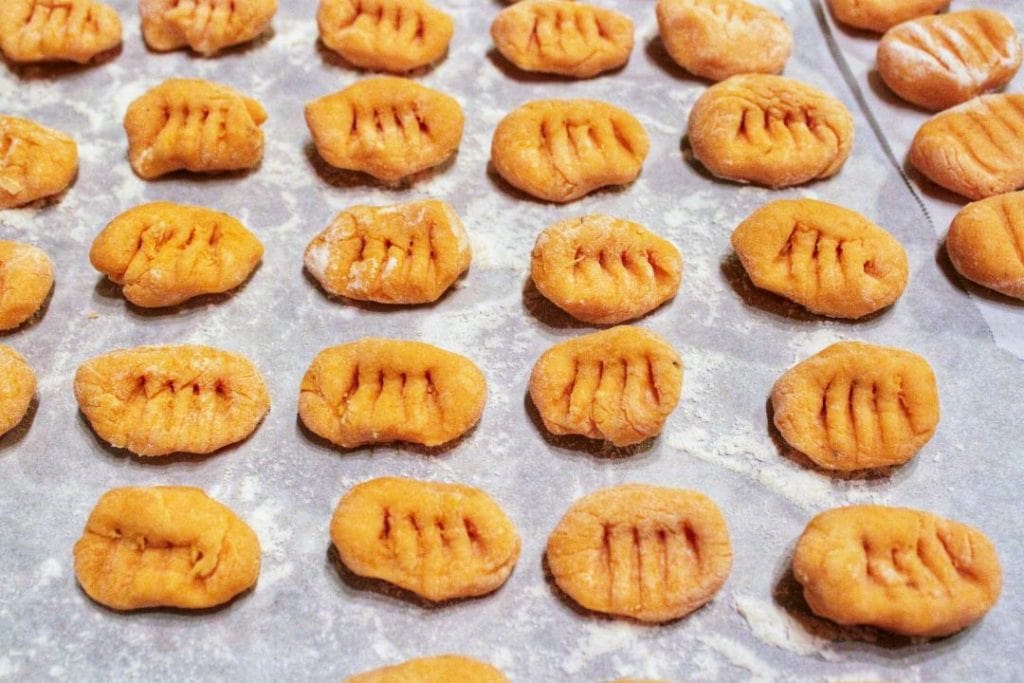 Despite the huge amount of gnocchi to be made, kid  number 2 disappeared after her slight guest appearance. It took me a while to finish the rest of them but the good thing is that this recipe made enough for two meals and gnocchi freezes well. 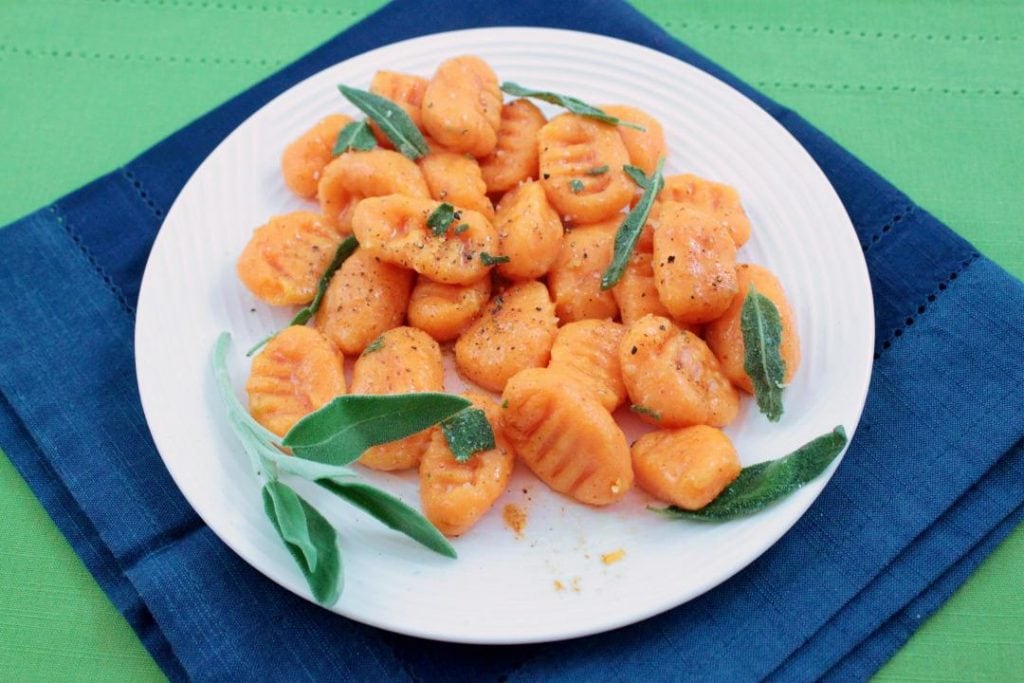 And after all of that at least the ‘sauce’ was really quick and effortless. I added 1/4 cup of butter to the pan and heated it until the little flecks of milk solids turned all brown and caramel-ly. Somewhere in there I threw in a handful of fresh sage leaves so they would be nice and crispy. After the Sweet Potato Gnocchi had boiled and become buoyant I scooped them out of the water and into the burned butter. 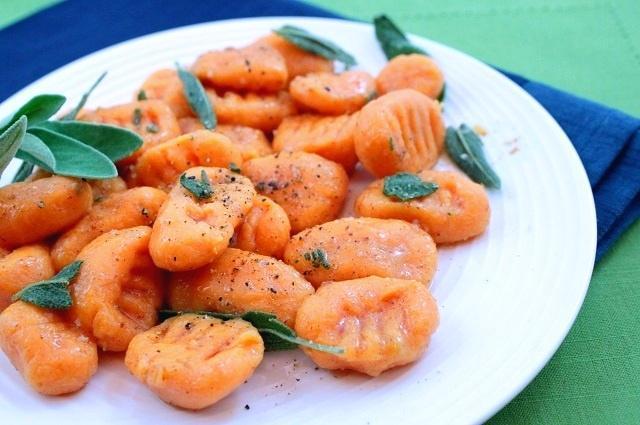 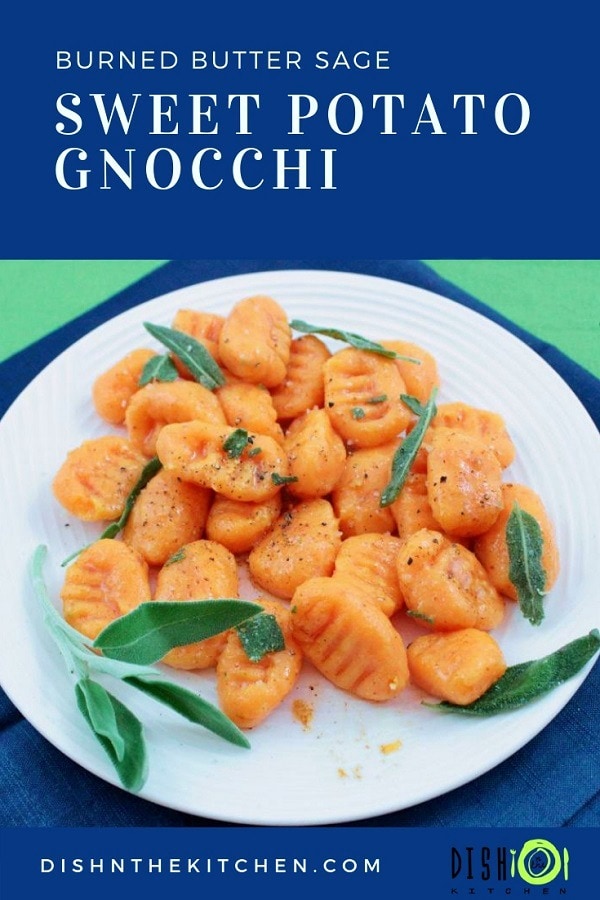