What Do You Feed a New Vegan?

There’s been an entire period of adjustment in our household. It’s really not easy when one member of the family wishes to become vegan and the rest are lifelong members of the meat eating club. It’s even more difficult when that single person has become obsessed with restricting their diet until they have gone below the recommended BMI for a person of their stature.  There are many obstacles that need to be dealt with on a personal level, for me anyway. When I look at my daughter it’s hard to see her instead of her disease. I know that witty, nerdy, artsy girl is still there but her bony exterior is very distracting. As a food blogger…I just want to feed her. As a mother there’s a deep concern for her well being, mind and body. Would it be easier for me to deal with if she still agreed to eat meat, eggs, and milk? You bet. It would be a lot easier just to focus on why she is so restrictive and to understand why her body (the way it was? is?) became unsatisfactory.

My fridge is full of vegetables. It’s bursting and there is no room for meat. Sometimes I am so focused on what to feed my daughter, the rest of the family is left behind. Just this minute my oldest son told me he doesn’t want to stick around tonight after being gone all week for work (and leaving for Hawaii tomorrow for another week) because of all the ‘weird stuff’ I make to feed her. Does it hurt? You bet. It’s the ultimate way to break a mother’s (and food blogger’s) heart.  My youngest son doesn’t appear to have a problem with the changes in our diet, in fact with him doing strength training for football, it’s good for him to have double the protein…both meat and legumes. He is really concerned about his sister though even if it isn’t something he fully understands.

The irony is that my pantry is probably one of the most well equipped for the vegan diet. I’ve got every type of lentil you could possibly imagine, as well as dried beans and many varieties of nuts. With some minor changes to the contents of my fridge I am well equipped to feed my daughter. Coming up with ideas that everyone will enjoy is another story. I really adore lentils but even I have my limits and I can only go so long without breaking down and adding fried bacon in with the herbs. With football every night it’s been a struggle to coordinate our varied diets. I will make a complete meal for my daughter every couple of days but in between I have begun to leave her responsible for feeding herself. It may seem a dangerous method but she is well monitored and completely capable of cooking a great vegan meal (see her instagram @celestialotter) or combining the leftovers in the fridge. We’ve had discussions about what sorts of foods complement each other nutritionally (though we still have been unable to visit a nutritionist) but I would still like her to include more foods that are higher in calories. With all that said I am so happy to say that she has just (barely) squeaked over the minimal BMI advised for her height and…you can bet we will take that as a small victory!

This salad was one of the first ‘complete’ salads I made for my daughter. It has julienned pickled carrots, roasted golden beets, sprouted legumes mix (lentils, mung beans, and adzuki beans), parsley, and green onions all tied together with a roasted carrot and cumin dressing from the Thug Kitchen cookbook. 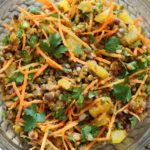 FOR THE ROASTED CARROT DRESSING (via Thug Kitchen) FOR THE SALAD

Funny story about meeting Matt and Michelle, the Thug Kitchen bloggers at the Food Bloggers of Canada conference. As I waited in the book signing queue with my cook book I thought about what to say when it was my turn. My daughter had mentioned briefly that she would like to cut down on meat and maybe someday become fully vegan. When it came time for them to sign my book, I mentioned that I thought my daughter was ‘turning vegan’ which they thought was pretty hilarious. Matt even asked if she had been ‘bit by a vegan’ which of course is ethically impossible seeing as vegans don’t eat meat. Anyway, we had a good laugh about it at the time and they signed my book like this:

The Ham That Keeps On Giving