Growing up I had an uncle who nobody ever thought would leave home. He was 36 and still living with my randparents.  In some cultures this is a normal thing, for children to live at home until they are wed but maybe not at the age of 36!  He stayed on the farm because he really just loved to be a farmer. My grandpa wisely sent all his sons away at the age of 19 so that they could experience different parts of Canada and new ways to make a living. Some of them worked on the rigs, some in the logging industry. Only two came back to farm full time. Shortly after my dad came back from his ‘away time’ he met my mom, married and moved out of the house but it took my uncle a little longer to leave the nest. We always joke that he never really did because he ended up building a beautiful log house a mere 300 m from my grandparents house.

My new aunt was apparently okay with this as she and my grandma had a lot in common. They both loved to garden and do all the things a farm wife does; bottle feed calves, pick raspberries, put up preserves, butcher chickens, haul hay bales….the list is virtually endless. We thought aunt Mary Jean was really something…a city girl from Winnipeg who fit so seamlessly into our lives.  She loved the farm so much she convinced her retiring parents to move to the farm and her family became our family. The post is a bit of a memorial to them as they’ve all passed on now and are very missed. Aunt Mary Jean was a special soul, it’s difficult to believe she’s gone. I think a lot about her boys (my cousins) who have all reacted to her death in different ways.  The oldest is getting married September 1 and the other two seem to be doing okay now, one studying to become an industrial plumber and the other planning on following in his dad’s footsteps to become our fourth generation to farm the family land.

Mary Jean and her mother definitely had an influence on my cooking. Mary Jean was not scared to try something new or cook some odd sort of meat the boys brought home from hunting.  Her mother Alice was the dessert bringer to family functions; usually a cheesecake of some sort. Her father, Gene was a retired professor who specialized in Fungi and I regret not asking him to take me out hunting wild mushrooms in the forest. Of course I was young then. What kind of teenager wants to go out hunting mushrooms in the bush with an old man?  I found out much too late that he had actually published a book on the Fungi in the mixed boreal forest and yes, I could get my hands on a copy but that would never replace learning about edible fungi from a real person.

I’ve been aching to go mushroom hunting ever since. Until I find someone willing to take me, or a group that goes based out of Calgary I’ll have to make do with ‘city foraged’ wild mushrooms.  Recently, I found a booth at the Crossroads Farmer’s Market that carries various wild mushrooms as long as they are in season. I’ve bought a truffle from Fifth Element Fine Foods and I’m on the call list for whenever they get fresh morels in. So far I haven’t received a call so I had to make do in the mean time with dried morels I found at the Cherry Pit in Calgary Farmer’s Market. 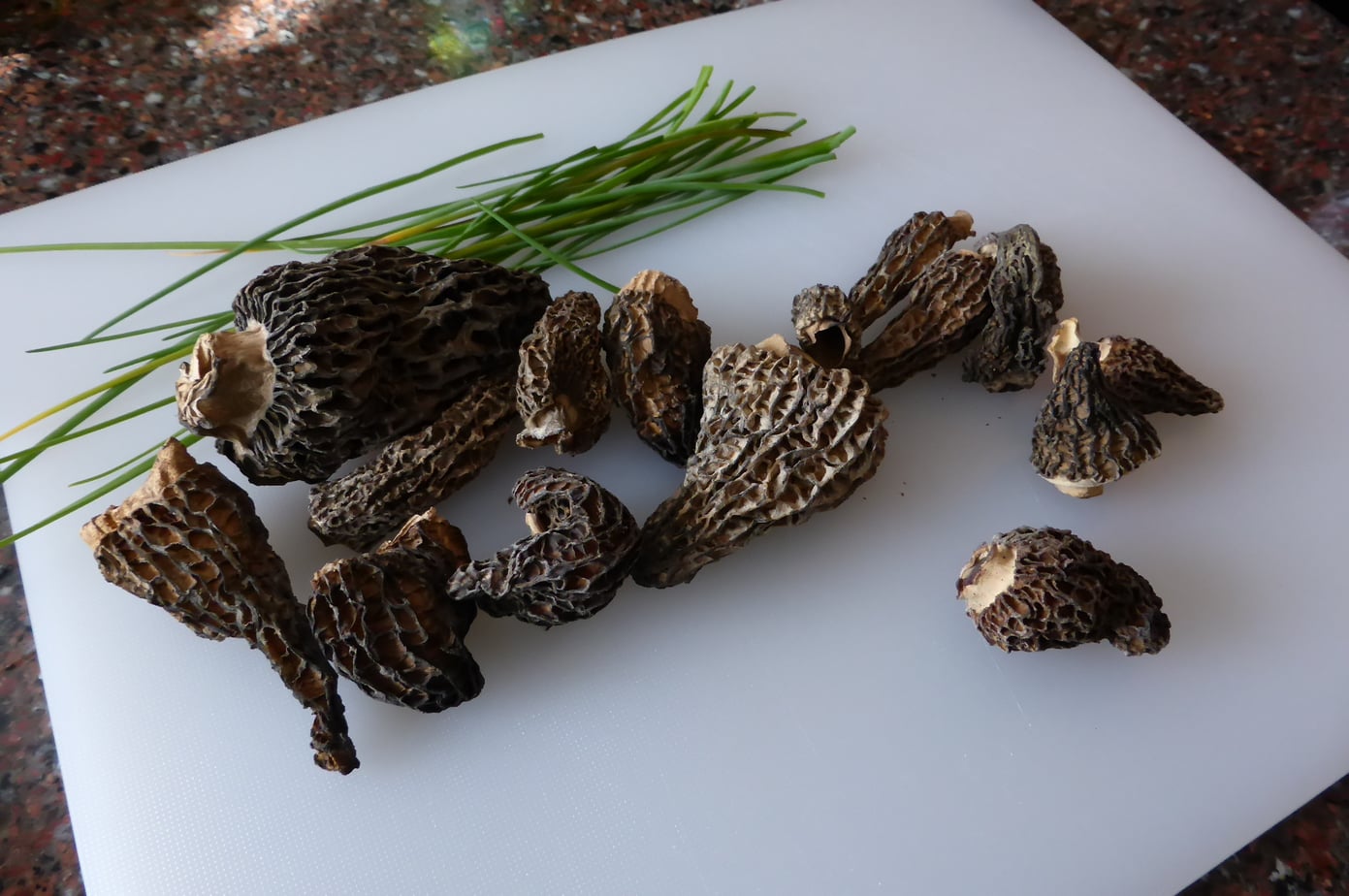 I browned the chicken until it was mostly cooked through, then removed it to make a bit of a sauce. For the sauce I de-glazed the pan with some Charles Smith Kung Fu Girl Riesling, added a bit of chicken stock and scraped up the precious bits on the bottom of the pan. Then I added the dried morels, some thyme sprigs, and replaced the chicken back into the pan. After it simmered for about 20 minutes it was time to eat. Onto the plate went the chicken, some broiled asparagus and new baby potatoes. Then the jus and morels. Add herbs from the garden, et voilà! 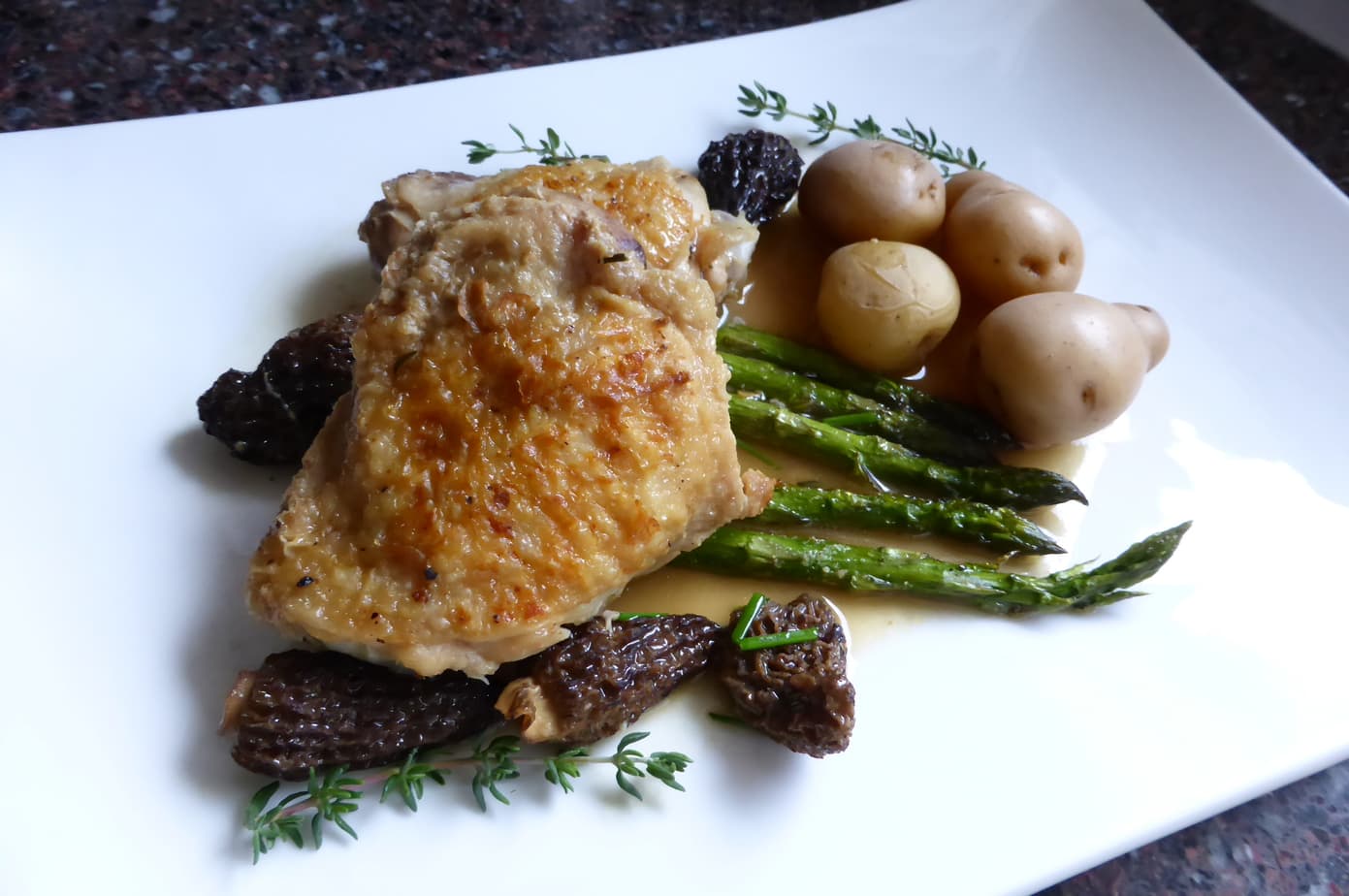 The dish was a hit with most of the family, except picky kid number two who doesn’t like mushrooms. For once I didn’t care because if she wasn’t going to have any, there were more for the rest of us.  Kid number one loved it! He went back for more morels, carefully lifting them from the pan so that all the jus inside the morel wouldn’t leak out.