I have a terrible memory and so often my kids refer to me as ‘goldfish brain’.  I like to think that when it really matters and push comes to shove I remember the important details. Like remembering to prepare three meals a day and do laundry. As a mom, those are important things to remember.

Bear with me here, my mind is still an active blur from my first official ‘foodie’ event. I will try to reconstruct my Saturday soiree as detailed as I can but having to balance ‘shock and awe’ with remembering details is NOT a strong suit of mine.

So I shall start at the very beginning. It’s a wonderful place to start…

I won two tickets to see Trevor Bird in action at Jerome’s Appliance Gallery via the City Palate Magazine ‘Ultimate Kitchen Dream Makeover’ contest on Facebook. I must admit, I didn’t read the whole post and I got a bit carried away with my kitchen description. While it is by no means my ‘dream kitchen’, my kitchen is a place where I can make food dreams happen. I made my first gnocchi and brined my first turkey in it.  I’m getting better at making pastry in it. A lot of great food has originated there. But it’s not large or functional and definitely not ‘pretty’. I mentioned that simple, affordable tweaks would help to make my kitchen be a bit more productive and functional. Like new back splash tile, some small shelves in front of the windows for fresh herbs, a re-designed island with less wasted space, more places to display my ever growing cookbook and cooking appliance/tool collections. Finally, I dream of having a stove with four working burners and an oven whose shelves don’t collapse when I put a heavy baking dish on them. As you can imagine that gets pretty frustrating fast.

I think it may have been serendipity that led me to Jerome’s Appliance Gallery. When I walked in, my jaw dropped in awe of the amazing appliances that they have on display. To the right and the size of my island was an Electric blue La Cornue oven from France. Pure art. And $55,000. Maybe a bit out of my budget, but if I ever win the lottery….

Each appliance really was a work of art. From the modern, to rustic and everything in between. The gallery also features leading appliance brands like the ever popular ‘Wolf/Sub Zero’, Miele, LG, and the top GE Monogram line. It’s layout is both functional and comfortable, allowing customers to browse appliance lines in a true kitchen setting. Most, if not all,  of the ‘on floor’ are in working order.  The owner, Jerome Curran personally came around to chat with each attendee. I found him to be very personable, a family man with integrity and someone who takes a lot of care with his business. He explained that while having a thriving business with great products is the aim of most business owners, Jerome’s also aims to be give back to the community in a meaningful way during various charitable galas held during the year. I thought back to the wine I had tasted earlier. I don’t think it was pure coincidence that it was  ‘Hat Trick’ wines (a perfect trio of great wine, NHL Alumni and Diamond Estates from the Niagara Region). Proceeds from the sales “go right to the NHL Alumni Association to support various charitable causes and promote the game of hockey.” (learn more here)

Top Chef events are held across Canada around this time of year to promote the new series premiering soon. This year, Calgary has been chosen as the Alberta stop and I’m glad that I was able to get in on the action.  Today’s event was emceed by John Gilchrist. He did a great job asking guest chef, Trevor Bird many interesting food related questions. Top Chef Season 2 runner up Trevor Bird began his life with food as all chefs do, with hard work and determination. He explained that making it as a chef in Vancouver is difficult because it seems like no matter how hard you work, it is extremely hard to break into the upper echelon of Vancouver Chef Elite. His success on the show has catapulted him into that bracket and then some. He is suddenly living his dream of owning a successful Vancouver restaurant which promotes locale, sustainable food.  The restaurant’s name ‘FABLE‘ is a mash up of ‘farm to table’ and reflects Trevor’s food philosophy. FABLE has been open less than a year and has already garnered three Golden Plate Awards for Best Mid Priced Restaurant (2), Best Atmosphere (5), and Best Service (3). 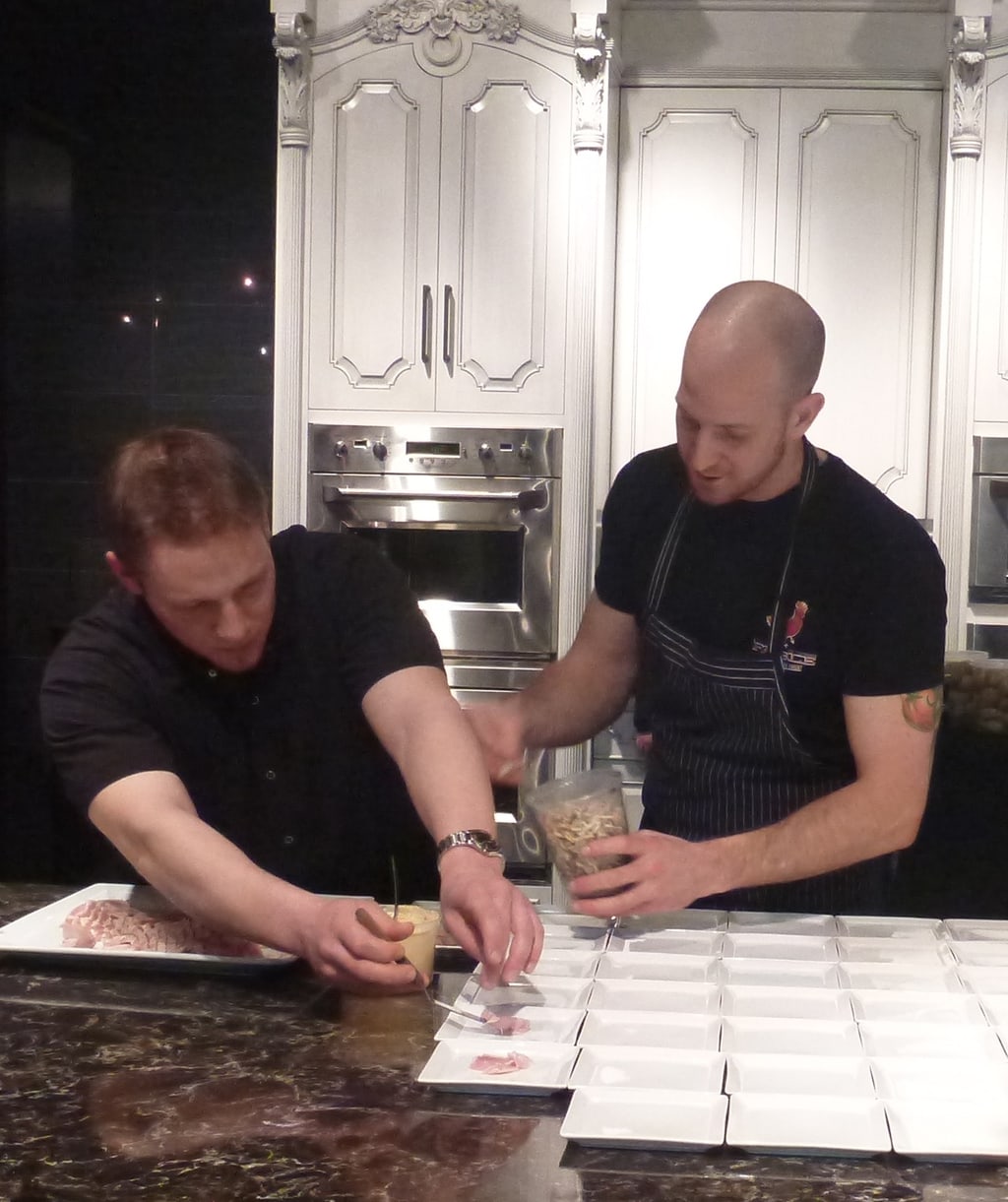 We were fortunate enough to sample some of that food philosophy today. First up, Trevor seared two tuna loins (ok so tuna is local in Vancouver, not Calgary!) and topped the slices with a dollop of Sriracha spiked mayonnaise. The slices were then topped with a crunchy element, popped wild rice. Trevor explained that to pop the wild rice you basically add wild rice to a lot of oil and skim it off the surface after it has finished popping. The finished product looked and tasted a lot like puffed wheat to me, just longer and thinner. I may give it a try since I have a huge bag of wild rice sitting in my pantry. 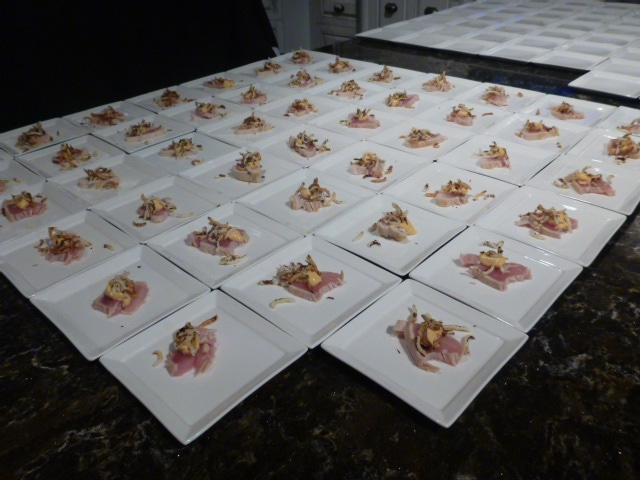 Next, Trevor made a simple potato salad using locally grown potatoes, herbs, and some greek yoghurt. It’s pretty hard to get locally grown lemons in Canada so he did have to bend the food philosophy a bit to add some acid to the potatoes. Greek yoghurt makes a terrific replacement for mayonnaise and it’s even more delicious. I’ve made potato salad this way before and I much prefer it. Add a bit of locally grown mustard seed for crunch and you have the perfect salad.

Top Chef Canada contestants exclusively use GE Monogram appliances on the show and this event was also about their promotion. Trevor demonstrated how to cook a steak in eight minutes using the Advantium wall oven. He had never used it before and had a bit of a panic attack because he was sure the eight minutes would have gone by and the steak would be under cooked. With a quick flip halfway through, those steaks came out absolutely perfect. What a wonder oven! He topped the steaks with a smear of his home made black pepper jelly and then sliced them. 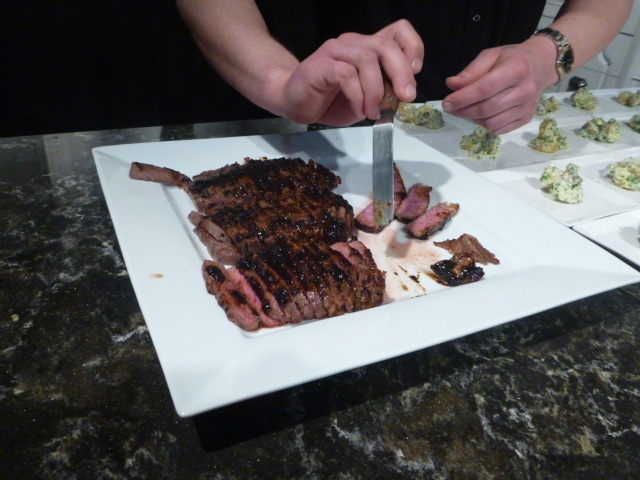 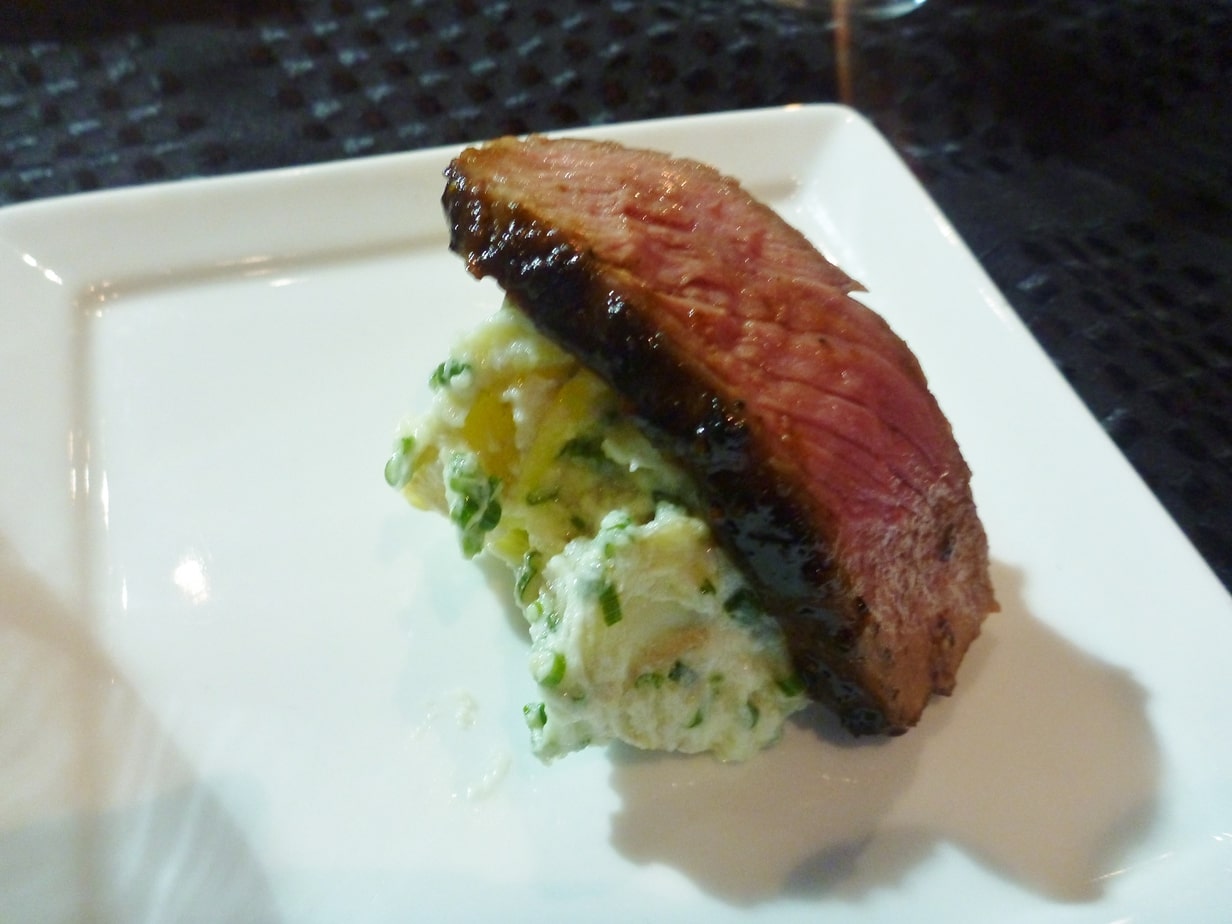 Apologies for the photo. I still feel a bit shy and odd carrying around my ‘big girl’ camera and taking my time when I’m surrounded by people.  Later on after the event, I was able to chat a bit with Trevor and even managed to get a photo of the two of us. My first ‘celebrity chef’ photo! I also scooped up one of the rapidly disappearing mini jars of black pepper jam. So far, my plans are to use it with some prawns. 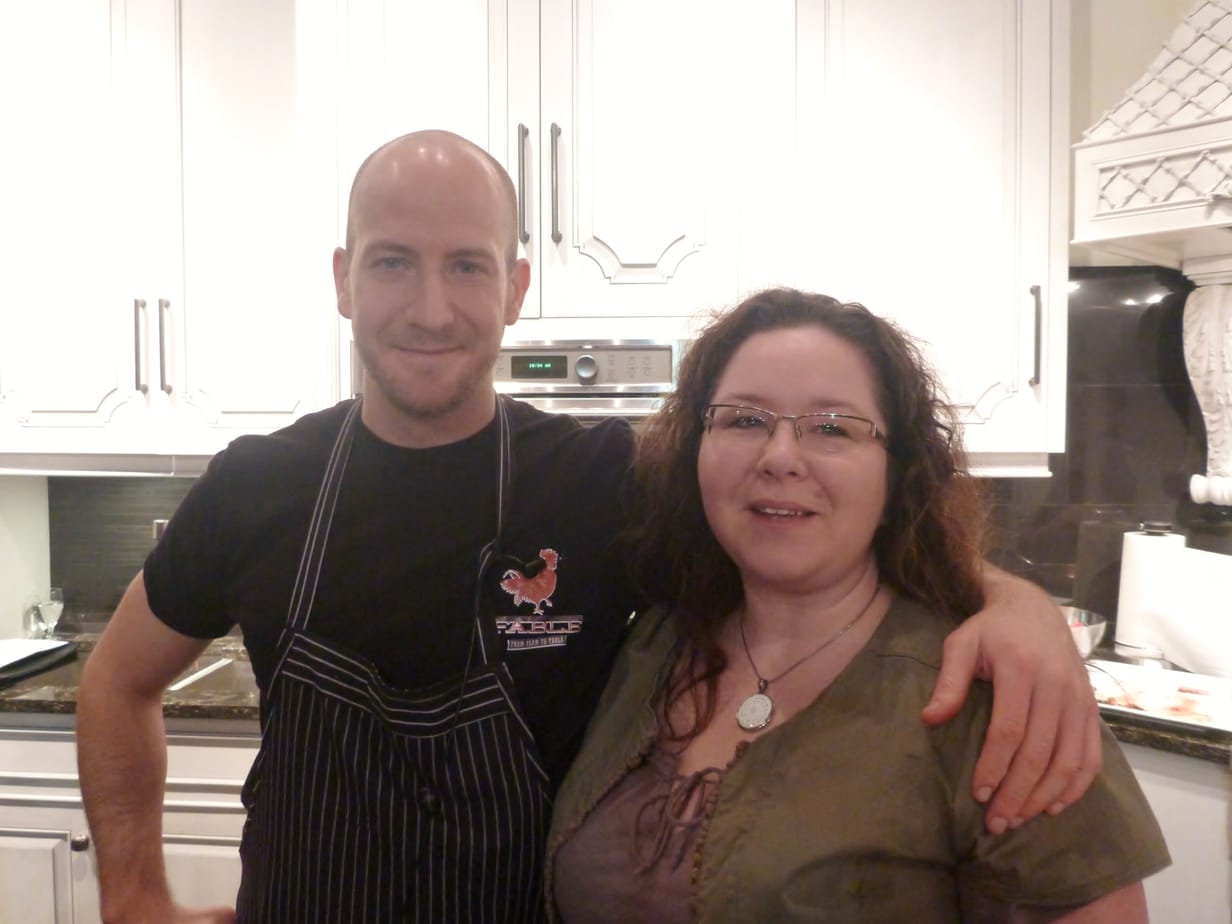 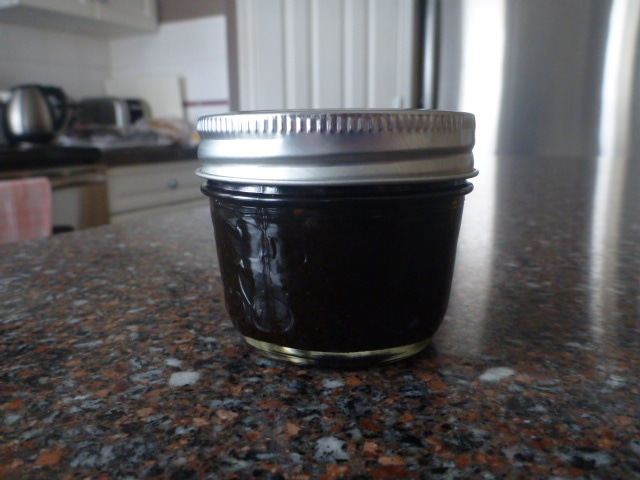 I just really can’t say thank you enough to City Palate. My companion and I really enjoyed our time. We met many engaging and friendly people and enjoyed great food. It was an event we won’t soon forget.