Happy Mardi Gras!! I plan on making the kids some potato pancakes with a spicy daal for dinner later but right now, I’m going to post up some lovely eats from our trip. Our first full day in NOLA began with a ride in a streetcar along St. Charles street until we reached the Garden District. For our first activity we had planned a guided tour through Lafayette Cemetery 1. It is one of the oldest cemeteries in NOLA and the many crypts are in various stages of disrepair, giving it an even more ominous feeling. We strolled around viewing all the various crypts while our guide gave us a little history lesson of the deep South. For those of you who are interested, this is the cemetery used in ‘Interview with a Vampire’. 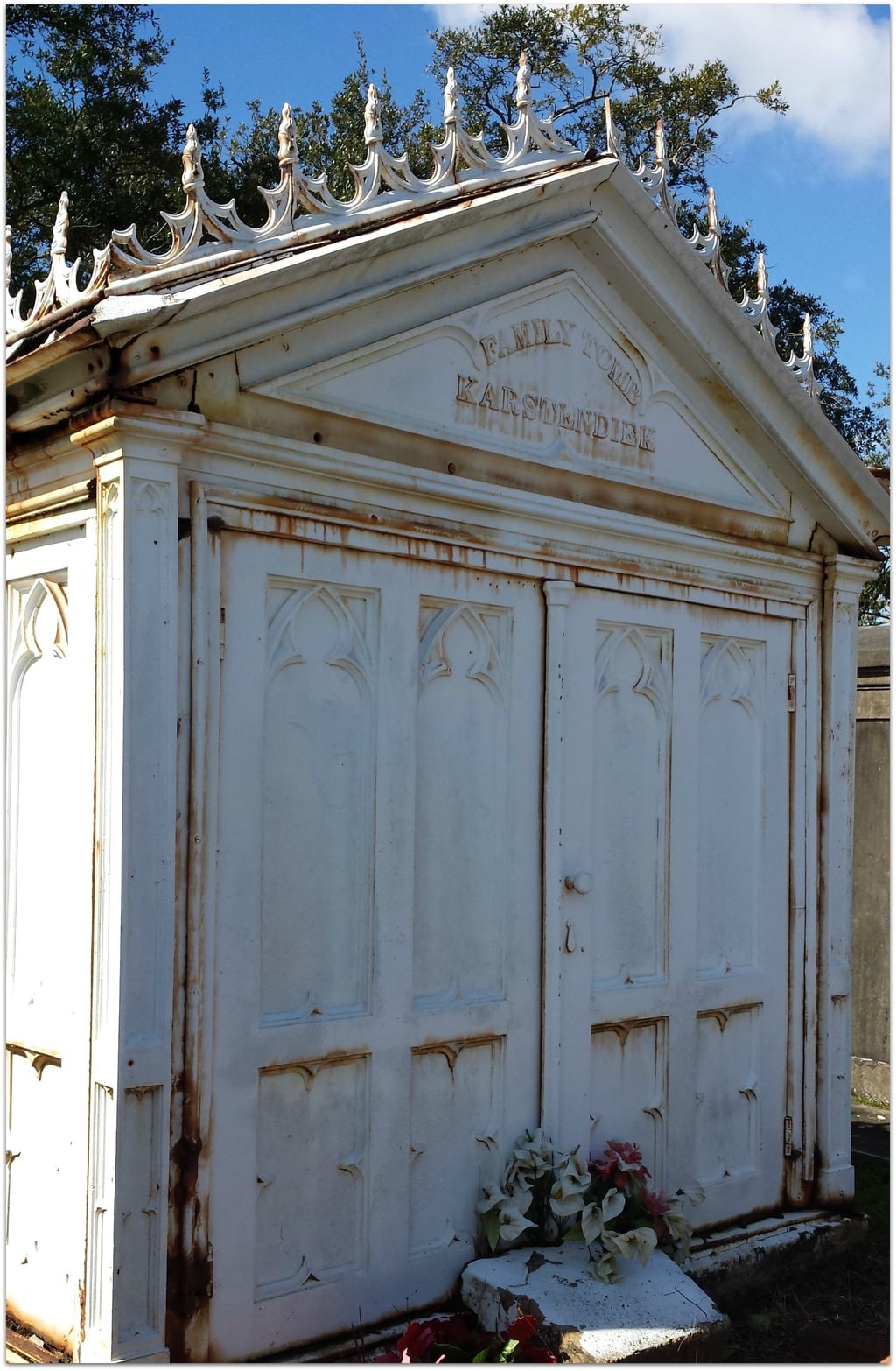 The cemetery tour was our only ‘planned’ activity but I also had read a lot about the shops along Magazine Street. A 6 mile long street of shopping extravaganza. Everything from art supplies and galleries, to mom and pop shops, lovely cafes, and antiques. Sometimes I swear I have a homing device in my brain which always brings me to the best food places. By 1:30 we were starving and I had to pick a direction to go in order to search for food. Maybe it’s not too difficult to find good food in NOLA or maybe I’m just lucky…I happened upon Sucré. The most amazing sweet shop in the state. I don’t know how we found it by accident as there are really only two locations and I had only just heard of it but had no idea where it was located. Divine providence I say. When we walked in it almost felt like I was back in Paris again, except everything was decorated up in green, purple, and gold. We didn’t have lunch there but we did buy a huge bagful of sweets which will be the subject of the next post.

After Sucré we walked a few stores down and happened upon Ignatius Eatery. 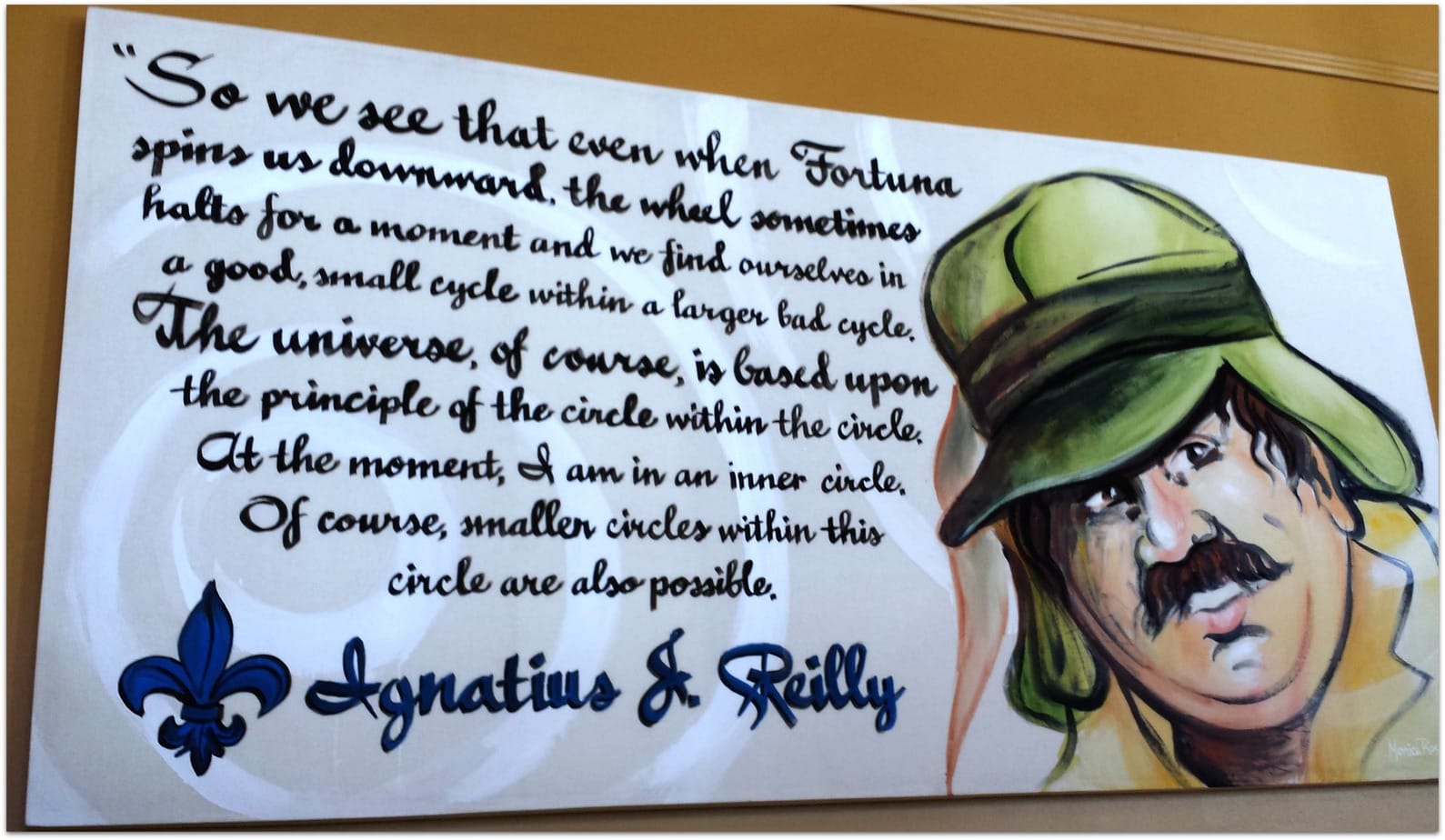 Named after the eccentric main character in ‘A Confederacy of Dunces’, Ignatius J. Reilly, the eatery was sight for sight eyes and also brought hope to our stomachs. Faced with the first real ‘Southern’ menu we had a difficult time deciding what to try first; Jambalaya, Shrimp ‘n’ Grits, Gumbo, Red Beans and Rice. It was almost like we were kids in a candy store. I talked Hubby out of the Crawfish Etouffee and then we all decided we had to try our very first Po’ Boys.  Hubby was okay with that and soon decided on the Fried Oyster Po’ Boy. Kid number one was really happy to order the famous roast beef Po’ Boy and both kid number two and I couldn’t pass up the Shrimp Remoulade Po’ Boy. Of course, she has a small appetite so she only ate half of hers, giving the rest to kid number one. He was pretty full with one and a half Po’ Boys.

We started with a Shrimp Remoulade stuffed tomato. It may have possibly been the best way to stuff a tomato. Ever. 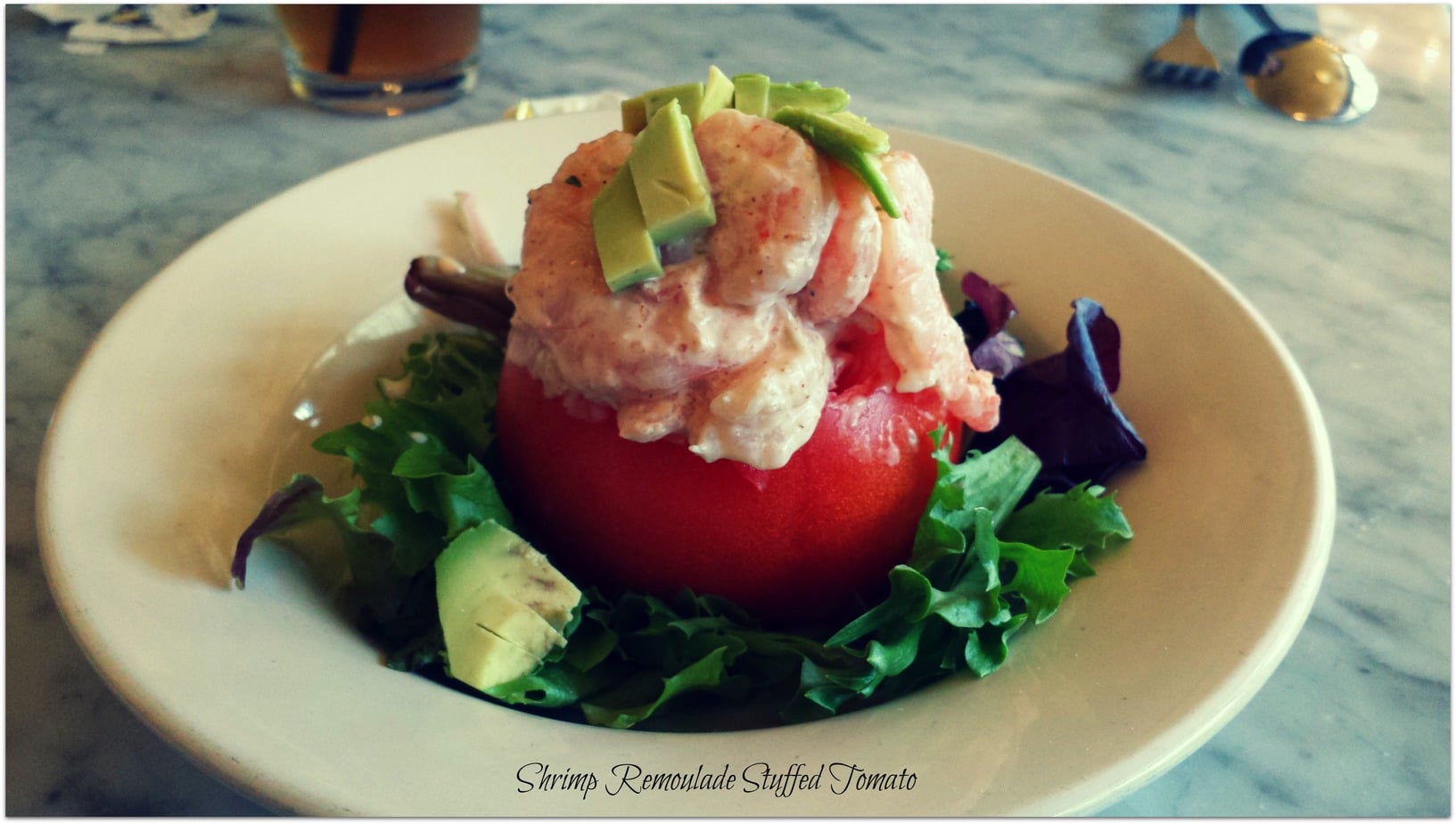 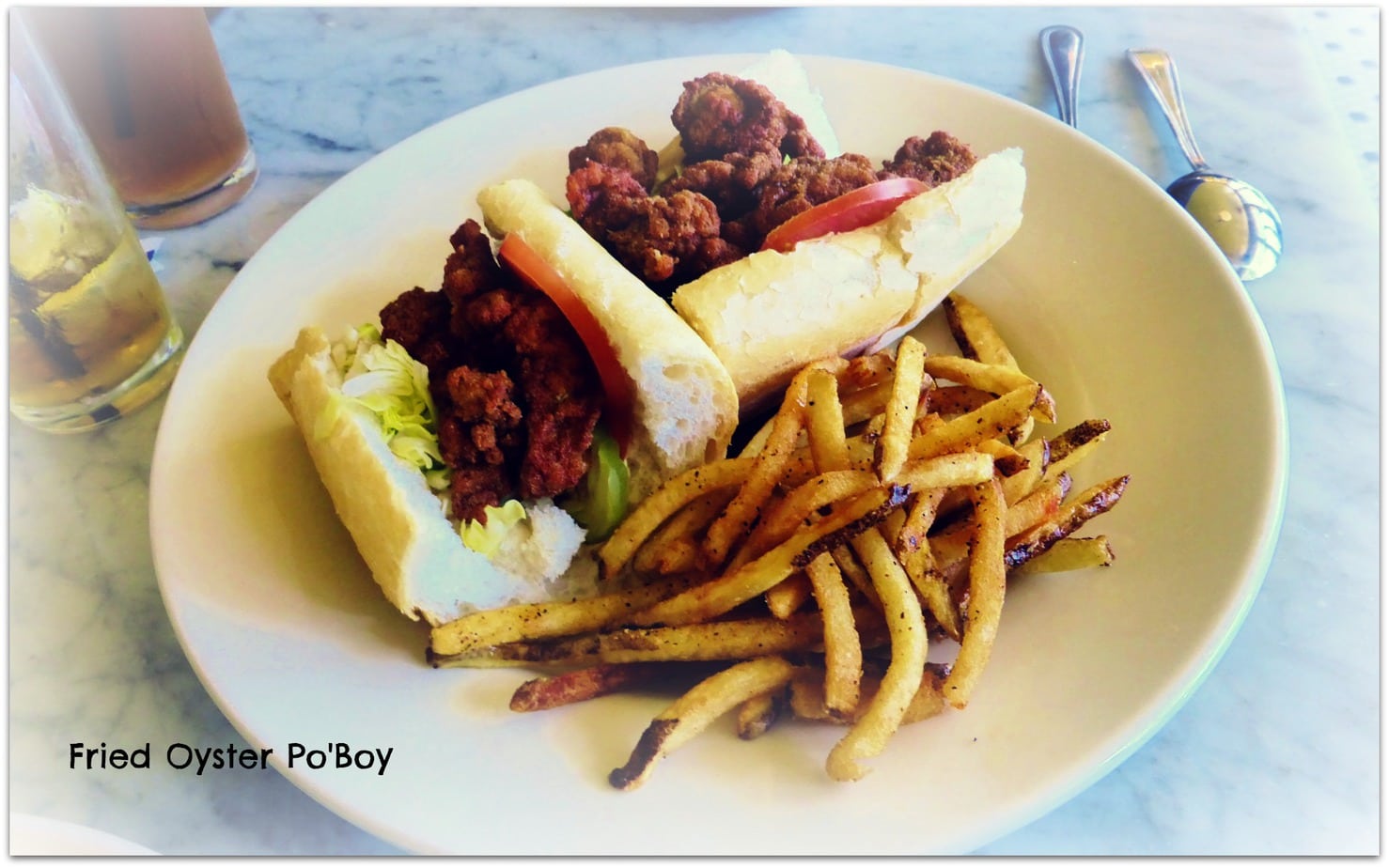 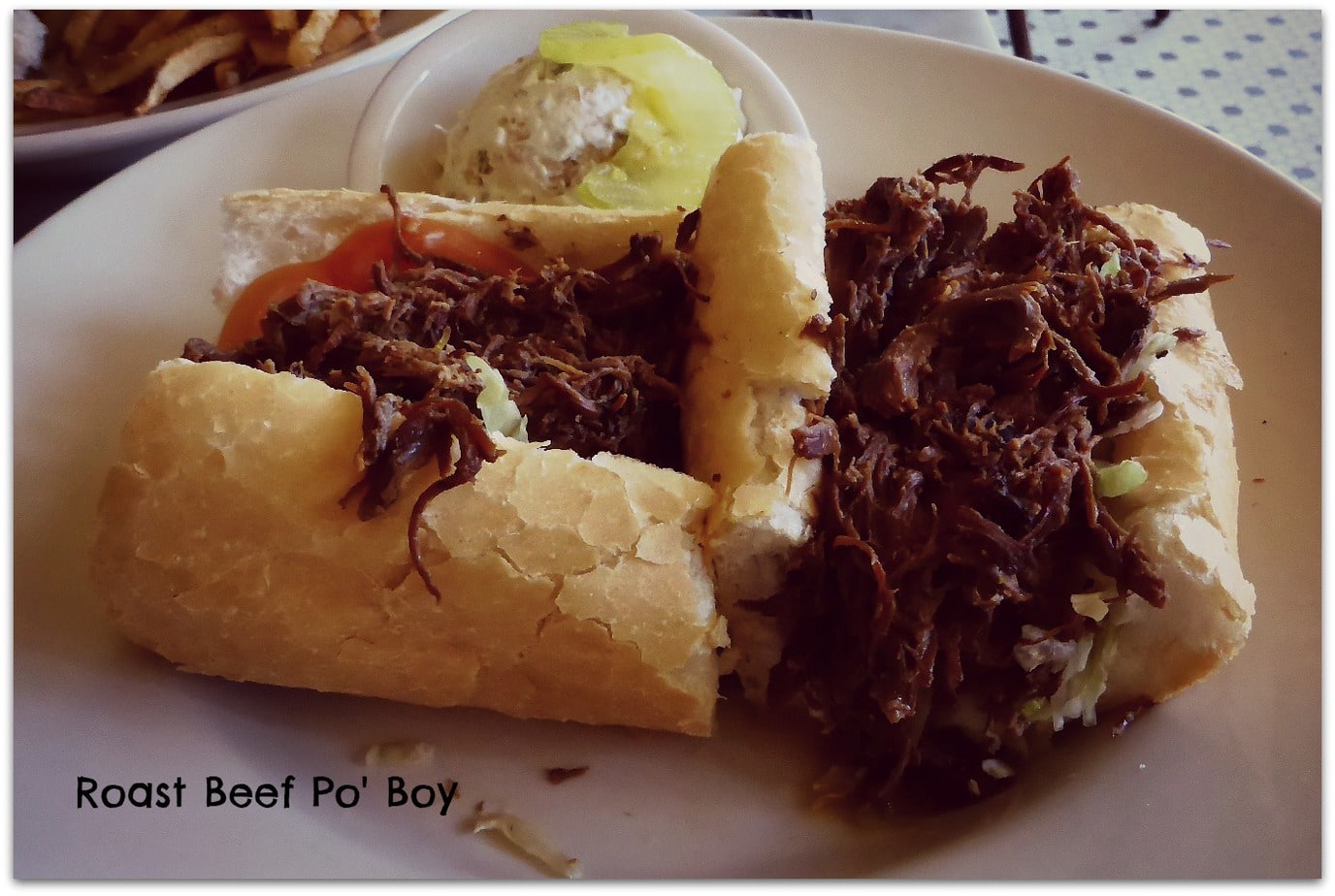 When out for sandwiches or burgers we normally all get salads as sides. We were on vacation though, so three out of the four of us got fries as a side and we were gobsmacked by how good they were. We ate them all! 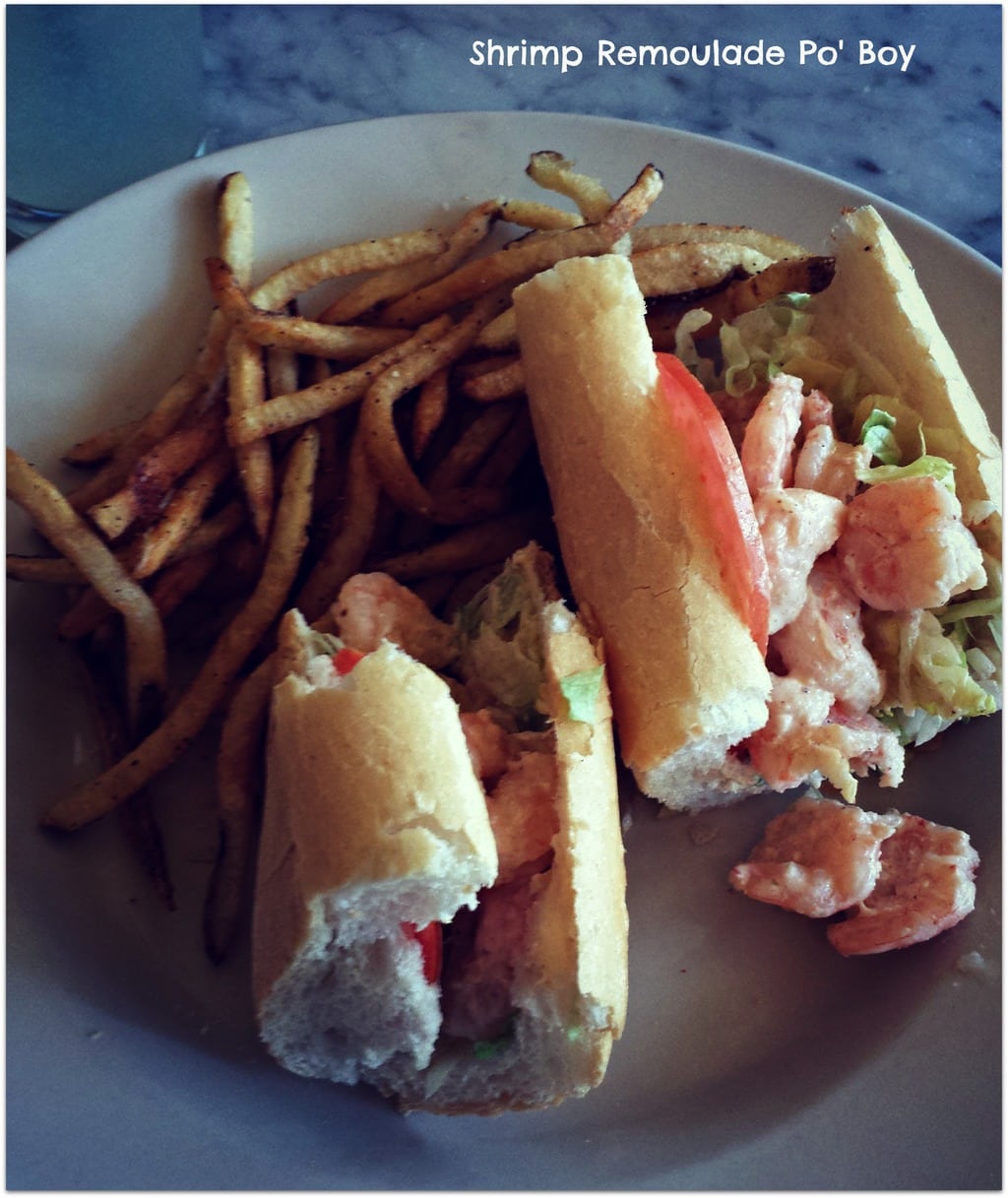 This is a great place for lunch along Magazine Street. Don’t forget to take advantage of their $2 Martinis from 1-6 pm. Yes, you heard right. $2 for a martini.