The Trans Canada highway is now open in both directions and Canmore is no longer cut off from the rest of the country. Despite the recent flooding tragedy that has hit this lovely mountain town, spirits are high.They have begun to rebuild and get on with their lives and that means having the regularly scheduled Canada Day celebrations. Though our main objective was to spend Canada Day in Banff, I thought it would be better to support businesses in Canmore and have our dinner there. It was kind of a spur of the moment decision to attend Canada Day in Banff farther up the road but I have to say it was also a once in a lifetime experience to share our Country’s birthday with so many people from around the world.

Getting to Banff was another matter. Despite the highway being open, traffic was a bit limited by the temporary roadworks around the wash outs. We decided to try our luck going through Canmore but traffic was even worse.  It turned out that we had arrived right when their main street parade was happening and of course, the only way through town is to drive through some part of the main street area. We were actually stuck in a traffic jam for 45 minutes in a town that takes two minutes to pass by on the highway! During this time, I realized we would be heading home really late and that a restaurant reservation would be a good idea on such a busy day. I felt it was really important to help out the local businesses in a time of crisis and I’d been meaning to bring the family to the Iron Goat Pub and Grill in west Canmore for quite some time now. It’s a gastro pub style place with really interesting decor and a superb view-able wine cellar in the basement near the washrooms. I called ahead and booked us a table for four around 7 pm.

I guess it’s lucky we were a bit early and there were still tables available as they inevitably lost our reservations. I have a suspicion the guy I spoke to on the phone didn’t bother writing it down. Anyway, we got our table and were definitely ready for some wobbly pops (beer!). With the warm weather we had all day long I was in the mood for a nice light pilsner but unfortunately so was everyone else. It was a little surreal being in a pub out of beer…I ended up ordering the special Big Rock  Rosmarinus Aromatic Ale even though we had some at home. Though it may seem odd to have rosemary in a beer, I absolutely love it because rosemary is  probably my favourite herb. I love the specialized aromatic ale glass, just like in Belgium! 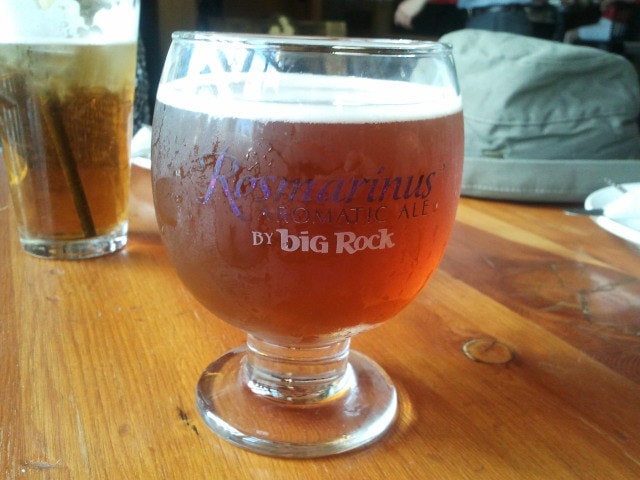 But this isn’t just a beer blog (though I really should start one…I love it so!) it is also a food blog. Kid number two went ‘light’ and ordered a grilled Caesar Salad.  Grilling romaine  is something I’ve been wanting to try for a while  now and I thought it was cool that they tried to go a bit ‘out there’ on what usually is a pub food classic. I don’t think kid number two was too impressed though.  She thought the salad was a bit ‘weak’ and could have had a little more dressing and ‘TLC’. I agree. It looks like it took the kitchen all of 30 seconds to slop this on a plate. 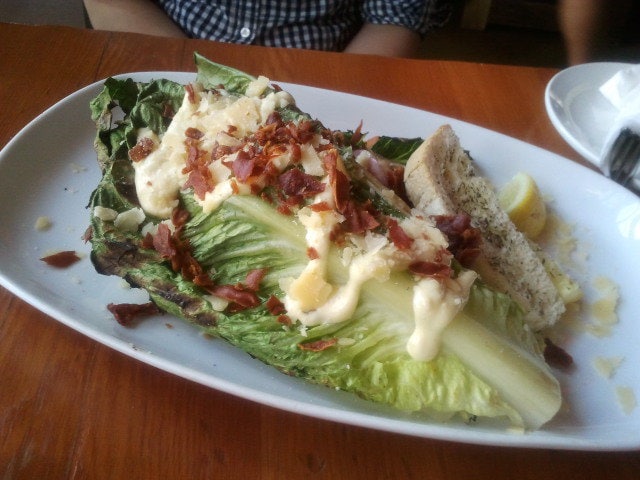 Kid number one ordered the Kobe ‘Oscar’ Burger topped with lobster, blue crab, swiss cheese, tomato,  and dill pickle which was served with yam fries. He was over the moon happy with this burger…with Kobe beef and seafood who wouldn’t be? I have had this burger here before and it happened to be during a beef e.coli scare so believe me when I say it IS possible to *F* this burger up. Just flame broil it for about 20 minutes until the edges get nice and charcoal-y. Shudder. 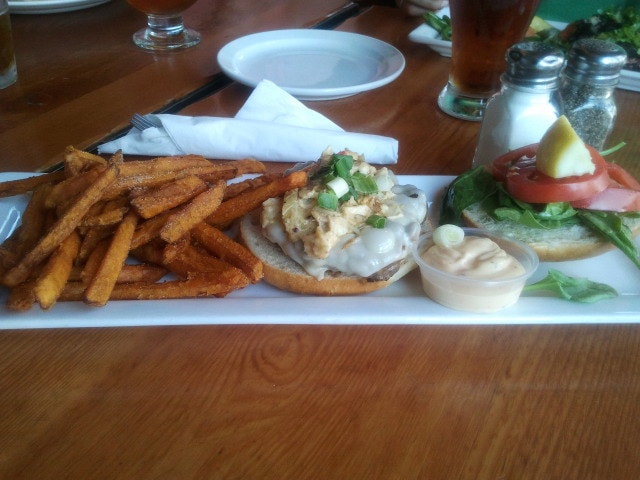 Hubby ordered the Chili Lime Arctic Char in a chipotle lime marinade, served with a jalapeno rice pilaf. He thought it was pretty good though definitely overcooked. 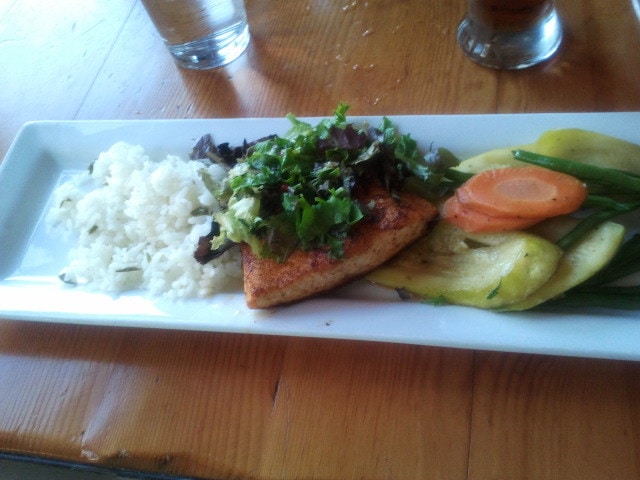 Lastly, I had a hard time deciding but eventually ordered the Iron Monodon pizza. It wasn’t too impressive. The crust needed to be crispier and there was way too much going on for toppings. Huge roasted cloves of garlic were way too much on the pizza and very overpowering. I would not order it again. 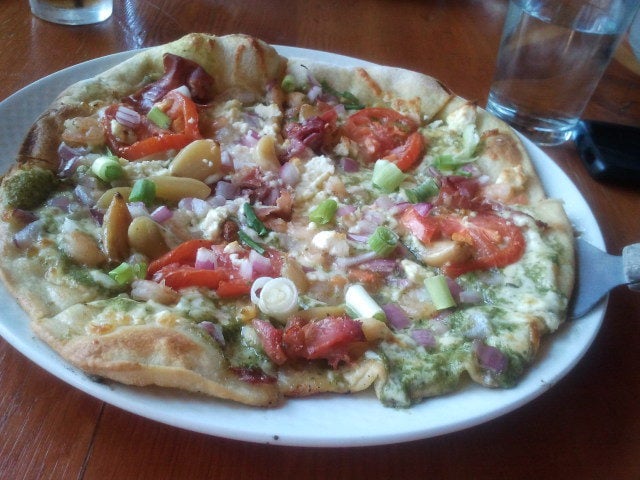 We did not stop there but also ordered dessert. Hubby had a Grizzly Claw. I remarked to the waitress that it was pretty much a Beavertail and she agreed. It turns out they were calling them Beavertails but had to stop due to copyright issues. 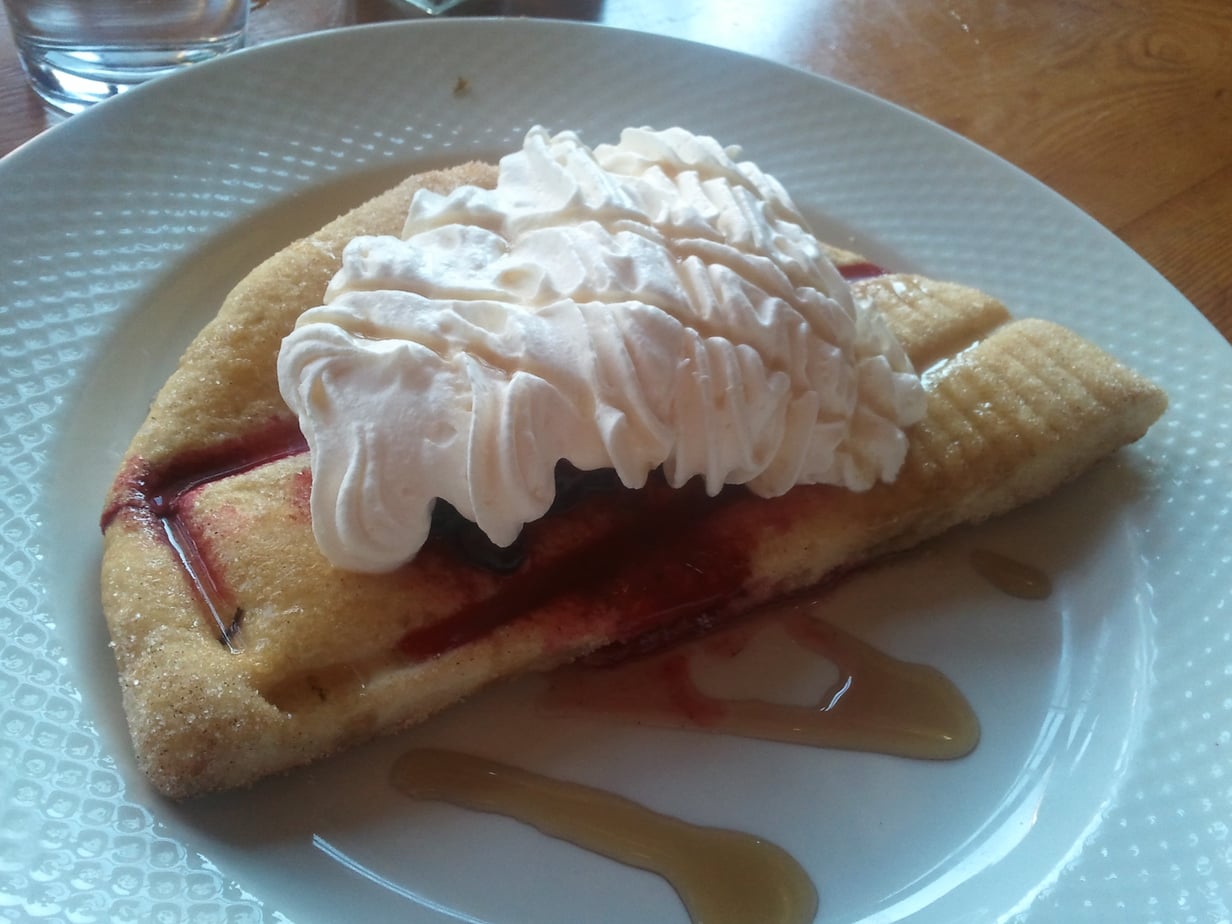 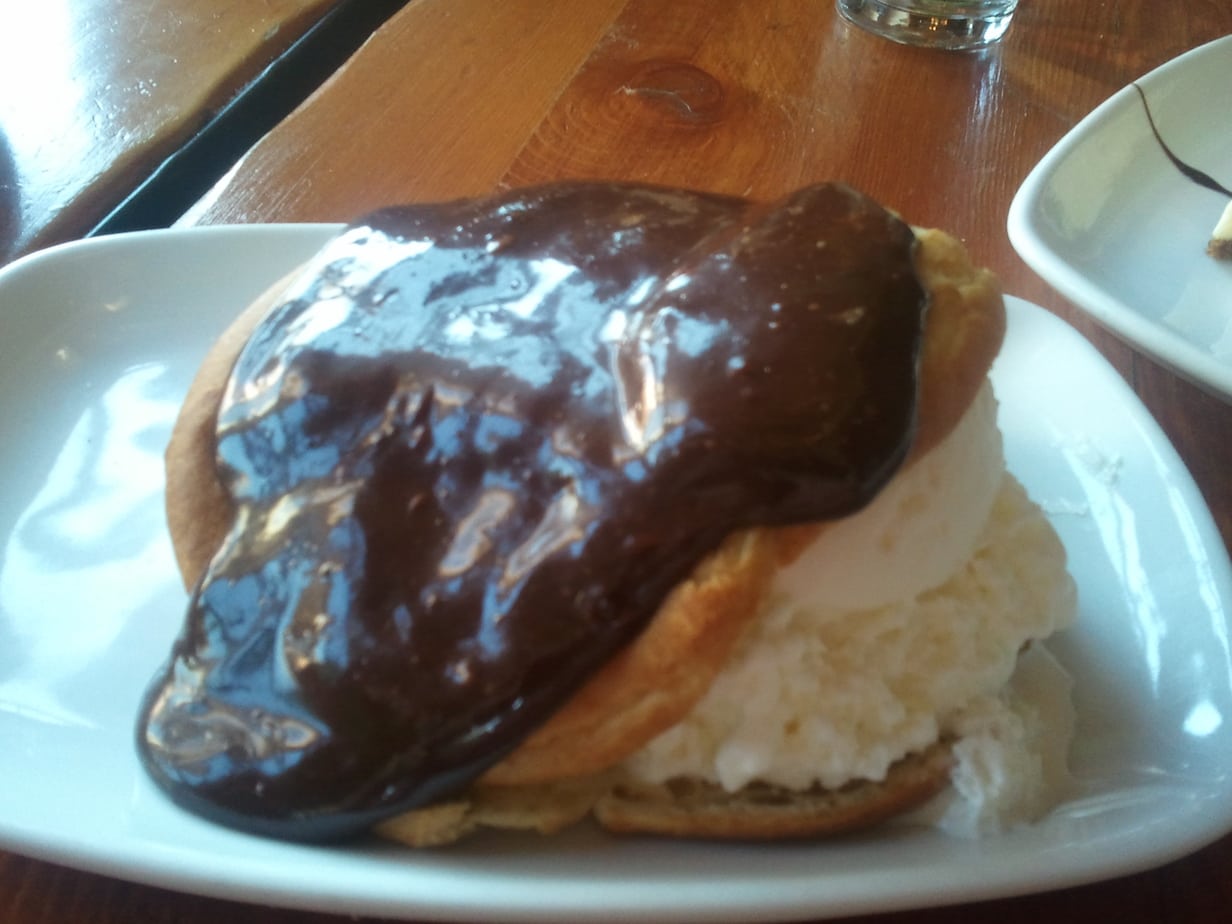 And I had the Key Lime Pie. It was probably the best thing about my meal except for the chocolate sauce! I wish they would have told me they were going to drizzle it across my pie. I just didn’t like the combination. 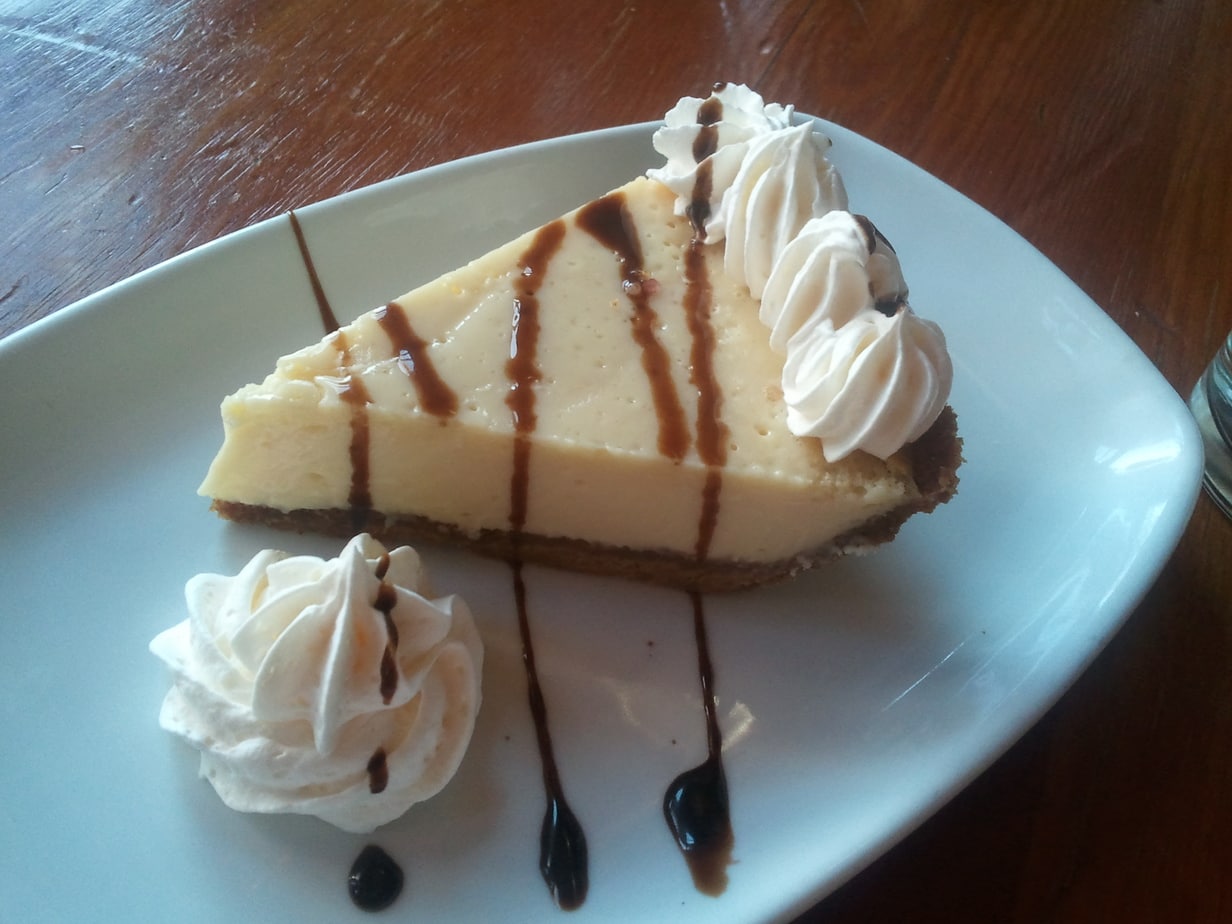 Bottom line, I love the atmosphere of this place. It’s beautiful with an amazing view and patio. Our service, other than the reservation snafu at the beginning, was decent but the food was just so-so. I have to agree with a lot of the reviews that say the food could be so much more. We may come back for some post-hike beers some time but I think we’ll pass on having a meal here again.