Autumn has arrived,  bringing with it a bounty of produce along with cooler temperatures and beautiful multi-coloured views. I was so excited to hear that the new crop of Honey Crisp apples had arrived at the farmer’s market I could barely wait until opening on Thursday to go grab a bag full! On the way home, I also stopped into the shops to buy some Tenderflake for the pastry.

I won’t pretend to be a pastry expert. My pie crusts are mostly less than picturesque and I have no special recipe. I just followed the recipe on the box. The recipe promised that each box of Tenderflake would yield six (!) pie crusts so I judiciously cut the recipe in half. After making the pastry and letting it sit for an hour or so, I started rolling it out in a quasi circular shape directly on the counter. I then realized there would be no way for me to transfer it to the pie plate so I gathered it all up and let it sit and rest for a while as I tackled the other two crusts. Rolling these out in between two sheets of parchment paper worked a little better for me, though the pastry on the pie looked a bit wrinkled from the wrinkles that got transferred from the paper.  Also, maybe I need more practice because I still have a hard time coming up with a perfect pastry circle and instead I round out the shape by doing some last minute patching.

Now for those apples! I skinned them all first, quartered, then cored them. Then I sliced the quarters into thin wedges, some of which I also broke in half. If you are worried they will turn brown you can put the chopped apples into a bowl and squirt some lemon juice. Or just work really fast! When I had gone through 4 large apples I added 3 tbsp flour, 2 teaspoons of cinnamon, and about half a cup of brown sugar. The mixture went into the waiting pastry and then was covered with another round of rolled pastry. I tried to make a fancy apple design while adding the steam vents but that is as crafty as I get. It did get a laugh from kid number two though. Before baking, I brushed egg white on the top of the pie and added some coarse sugar. I chose to bake it at 425° F for 25 minutes, then turned it down to 375° F for another 30 minutes. Both the apples and the crust were cooked perfectly. 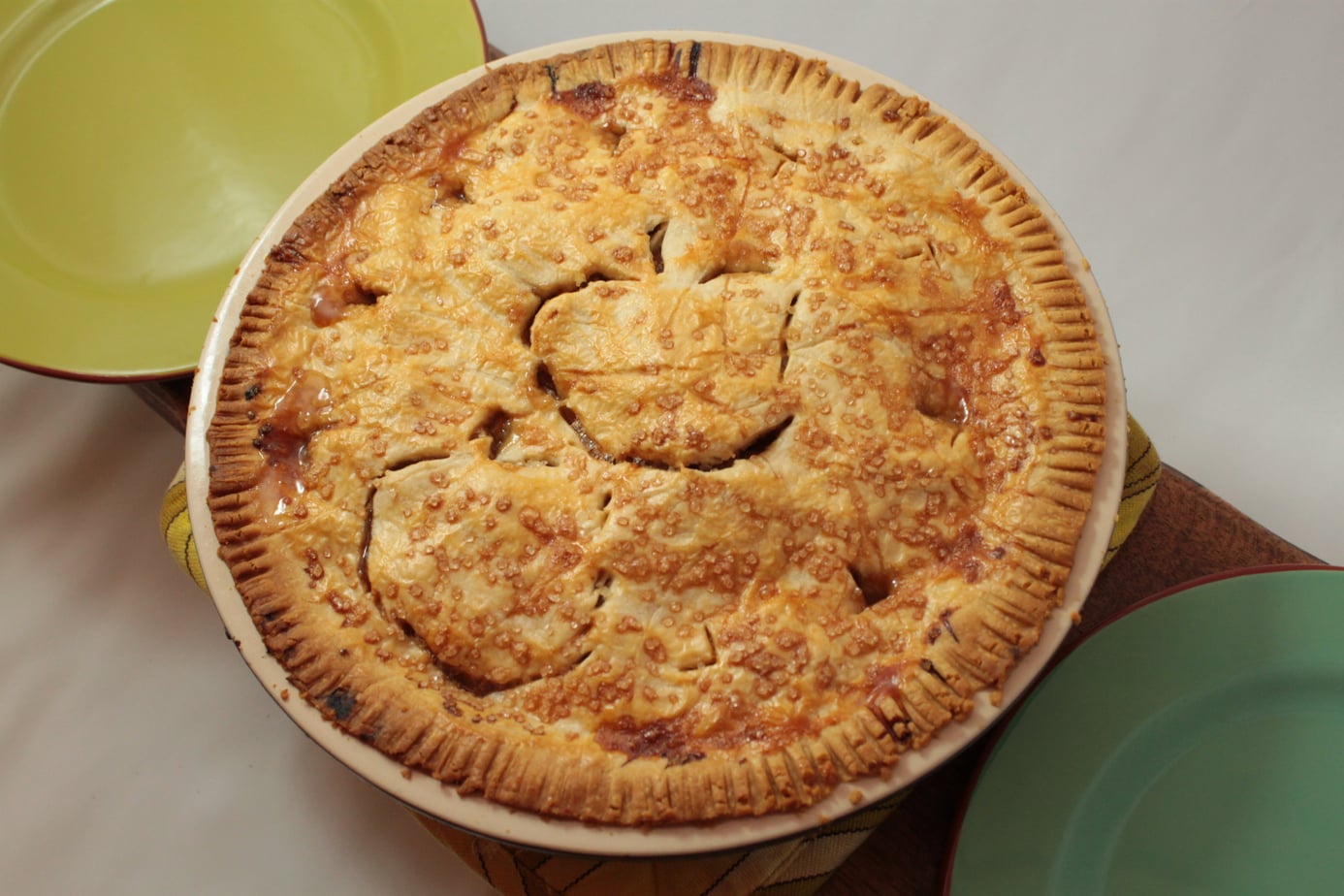 It may not have been a visual treat but that crust was very flaky and crumbly and the apples were spiced just right. Everyone voted right away to put this apple pie on the ‘make again’ list but they weren’t too disappointed when the next pie I made was a Pumpkin Pie.