These super fudgy Two Bite Black Bean Brownies are full of delicious chocolate-y flavour and good for you fibre. Whip them up quick using basic pantry ingredients and top them with decadent Peanut Butter Frosting

*This delicious Two Bite Black Bean Brownies post was sponsored by Purolator Tackle Hunger. All opinions in this post are my own (and you all know how much I love football!)

If you have been reading this blog for any length of time, you already know that I love football. That’s why I was so thrilled to be asked to participate in the Purolator Tackle Hunger  game day food drive here in Calgary. The Purolator partnership with the Canadian Football League helps raise hunger awareness by collecting non-perishable food items (and cash donations!) for food banks across the country.  Since its beginning in 2003 the Purolator Tackle Hunger® Program has helped deliver the equivalent of more than 12 million pounds of food to food banks across Canada.

Always Have a Fall Back Play

So, what part can food bloggers play in the Purolator Tackle Hunger program? With so much emphasis on gathering food and donations at games across the country, there’s a need to reach a wider audience. We want to show that healthy and delicious food can be made from staple food bank items.

Each CFL team has a Purolator Tackle Hunger ambassador that volunteers throughout the community and promotes the program through the media. One rainy Friday practice, I met with Calgary Stampeders Offensive Lineman Derek Dennis to chat about his PTH connection. After seeing him greet fans and watching him during the press conference, I understood why he was their chosen ambassador. This giant native New Yorker has the kindest heart. He also remembers being on the receiving end of food bank donations during his childhood and knows the importance of the PTH program in the city of Calgary and across Canada.

O-linemen are notorious for their gigantic appetites. Derek (nickname: Bonecrusher or DD) is 6’3 and weighs around 348 pounds. He didn’t get there by eating salads but he is fond of simple foods like white rice and lots of meat. On game day DD loves a large breakfast followed by light snacks throughout the day. These guys work really hard during games and having a full stomach when someone lands on you is never a great idea. That’s why small snacks that provide a lot of energy and a bit of protein are important. 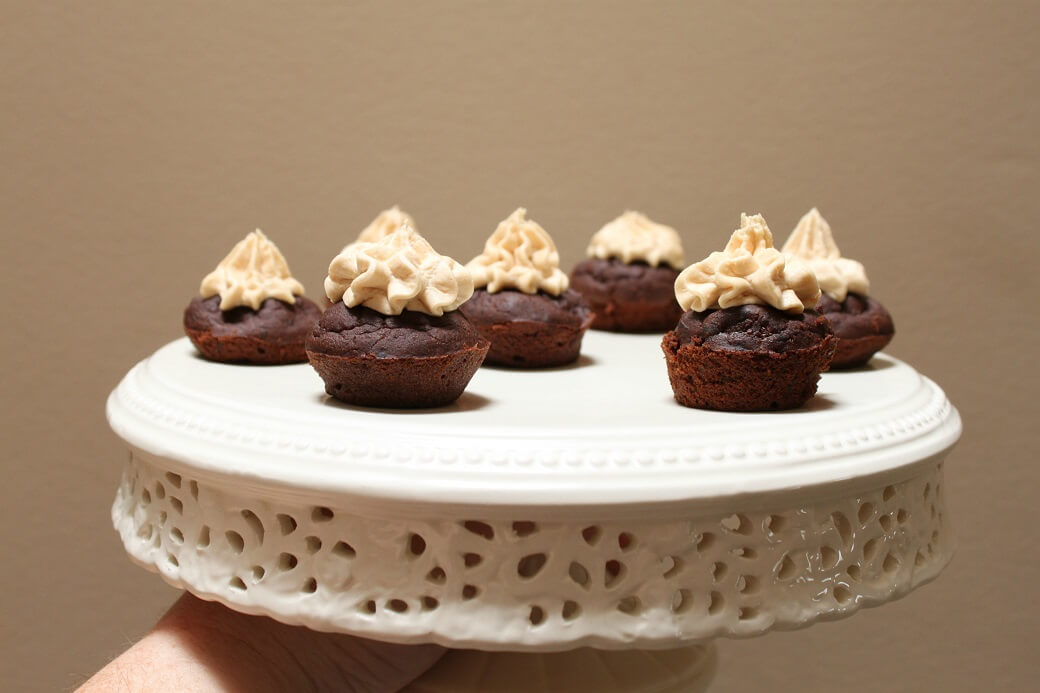 While we chatted I found out that Derek also has a sweet tooth, more specifically he loves brownies. I took a look at the Calgary Food Bank’s July ‘wish list’ and saw that peanut butter and beans were of high priority and was immediately inspired. I decided to combine them both in a Black Bean Brownie recipe while adding applesauce as a nod to Derek’s home city, the Big Apple.

The saying goes, if you can’t be an athlete, be an athletic supporter. My job as a football mama (and food blogger!) was to provide vast quantities of food during training (like the time I had a kitchen full of boys chowing down on my Japanese Chicken Curry). However, the game days snacks like these chocolate chip cookies were always the most appreciated. The Calgary Stampeders have a real life football mama who brings baked treats to her cookie squad to practices. My friend Connie Fekete (@newfiehun) has been doing this for 8 years now and one of these days my plan is to join her with some Black Bean Brownies. 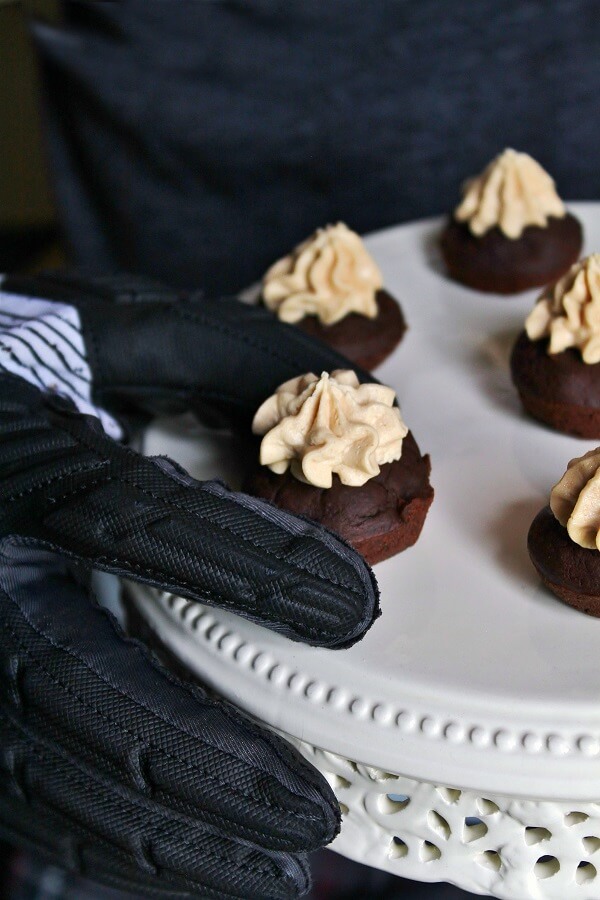 This year, my city’s team, the Calgary Stampeders Tackle Hunger game took place on August 17 and the equivalent of  40,537 pounds of food was donated to the Calgary Food Bank. I’m so proud of my city and thrilled to have such generous Stamps fans! 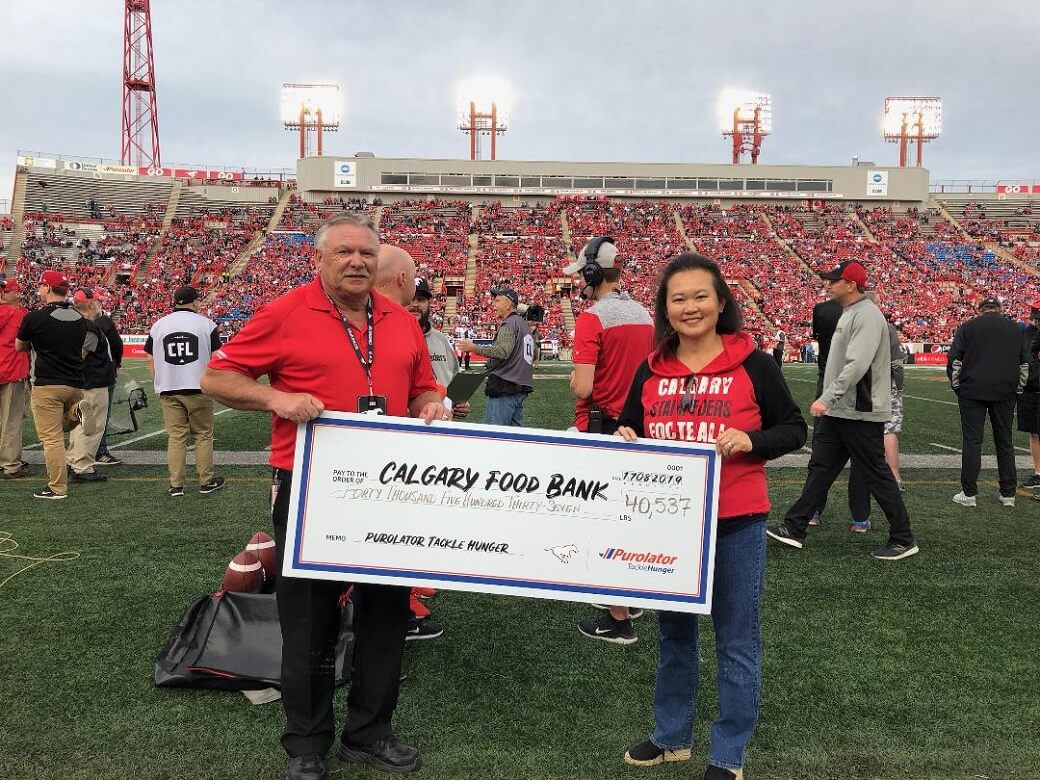 More About the Calgary Food Bank

The Calgary Food Bank has been providing quality food and supplies to clients in need since 1982. Over the years, the need for the food bank has become greater than ever. During the latest downturn in the Alberta economy, the food bank saw a record 184,500 lives affected and provided 90,860 hampers to families and individuals in crisis. Fortunately, there are also many Calgarians who regularly respond by giving their time, money, and by donating food. Food bank volunteers ‘banked’ 148, 104 volunteer hours (a value over $4.4 million dollars)
and assisted in delivering 9.4 million pounds of food in 2018.

If you are able to donate your time to the Calgary Food Bank visit HERE.

If you want to donate food, the Calgary Food Bank has a wish list of most needed items HERE.

For the Peanut Butter Frosting (from handletheheat.com)