What to do with a 5 lb bag of beets from the farmer’s market? Roasted beet salad…check; Harvard beets…check; Beet, Red Cabbage and Potato Hash…check! Today there were two more experiments on the board:  One Ultimate Chocolate Beet Cake courtesy of  Nigel Slater  and another ‘something’ to go with it. I thought about a sweet beet reduction or jam but then realized that I hadn’t used the ice cream maker in a long time. Beet and Orange Ice Cream sounded like two flavours I could really get behind. It was so quirky that it might just work!

It’s not much of a stretch from zucchini cake or my favourite Chocolate Carrot Cake from Alexander’s Restaurant in Saskatoon. Every time I drive through Saskatoon on my way home to the farm I make a stop at Alexander’s for a slice of this cake. Every time I ask for the recipe they shoot me down. Why do I still go back? Because it’s probably the best cake I have ever put in my mouth. Period.

Beets in a cake may sound like a novelty but it really isn’t. Southern cooks have been using them to make red velvet cakes for decades because they are sweet and turn a great chocolate cake to a lovely red hue. I’ve been wanting to make one for a while until one day this recipe popped up on my twitter feed. I wouldn’t necessarily use a Nigel Slater recipe (though I do love David Lebovitz and he says this recipe is tops so I’m good with that!) and particularly one that has so many gosh darn steps. I felt in some parts like I was perfecting brain surgery. In the end, all the melting, sifting, and folding were worth it.

The cake came out quite nicely, evenly crumbed and very moist with the beets lending a sweetness to the bitter chocolate I used. I just felt so darn healthy eating this cake, I didn’t feel guilty at all especially when I served it with the beet and orange ice cream. The slight tang of citrus really went with the sweet earthiness of the beet, leaving me really happy with the flavour of the ice cream. However, I felt maybe the texture was a little off, even with the added mascarpone cheese. The ice cream recipe did not begin with a true custard, but used cornstarch instead. I felt like it was a bit of a cheat. 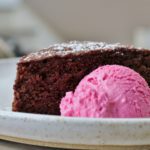 0.0 rating
What to do when you're craving dessert and have a 5 lb. bag of beets. Note: You'll need overnight freezing time for the ice cream.