Cheesy Cheddar Stout Soda Bread is a flavourful take on the original Irish Soda Bread. Adding sharp cheddar and stout beer make it a hearty and delicious addition to any meal.

Have you ever tried Irish Soda Bread? It’s amazing and so simple at the same time. This Cheesy Cheddar Stout Soda Bread is a slight twist on the original.

With the addition of sharp cheddar cheese and stout, this bread becomes elevated to a whole new level. It’s so incredible when it’s warm right out of the oven. Just a slather of butter is all you really need.

What is Soda Bread?

Soda Bread is a quick bread that is made using baking soda (sodium bicarbonate or bread soda) as a leavening agent instead of yeast. Traditionally it contains only FOUR ingredients; flour, baking soda, salt, and buttermilk (although some argue against the inclusion of salt).

The interaction between the baking soda and acidic buttermilk (or sour milk) creates bubbles which result in the bread’s unique texture.

Is it Really Irish?

Soda Bread is considered an important part of Ireland’s culinary identity. So much so that there is a Society for the Preservation of Irish Soda Bread dedicated to protecting this culinary treasure.

While it has really only been baked in Irish kitchens since the late 1830’s, it’s played an important part in the country’s history as a ‘necessity food’ which made use of inexpensive basic ingredients.

The characteristics of a traditional Irish loaf are quite unique to the Emerald Isle. Soft wheat flour (similar to bread flour here in North America) is more suitably grown in Ireland’s climate. Soft wheat flour has relatively low gluten which makes it perfect for use in quick breads. 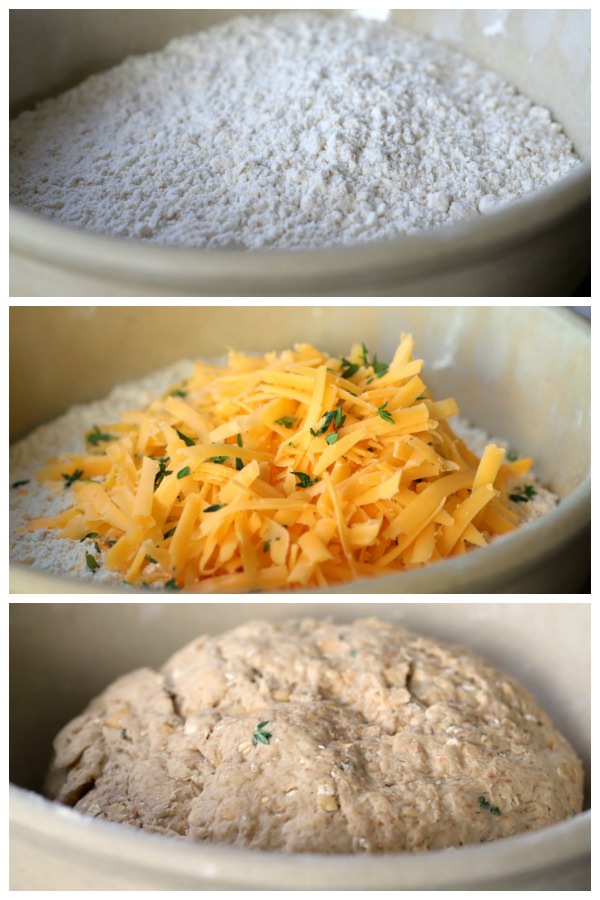 Next, the structure of the bread is of utmost importance. It is always marked with the signature cross to ward off evil (or release the fairies) though the shape of the bread varies by region.

Anyway you slice it, this uniquely textured savoury bread is quintessentially Irish. Though this bread is baked year round, you can bet bakers bake more of it around St. Patrick’s Day. It’s filling and it tends to help soak up liquid indulgences!

A Bit of Soda Bread History

Before the invention of baking soda, Indigenous North Americans and early settlers used pearl ash (created during wood burning) as a natural leavening agent. However, it was the Irish that replicated this chemical process, creating baking soda as we know it today.

Scottish bannock is a flat griddled soda bread which can be made from either barley or oatmeal. Lastly, there are delicious Scottish scones (sometimes made with potato!) which are still very popular to this day.

Additionally, Australians also make damper which is very close to the bannock made by Indigenous North Americans. When we lived in Australia, our kids often made damper over a fire during Scout camps. The told us they used 7 Up as a liquid instead of buttermilk!

Finally, Serbians and the Polish also have rich traditions centered around their own forms of soda bread.

The process for making this quick bread is quite simple. Mix all the dry ingredients together in a large bowl. Cut up the butter, then rub it into the flour mixture with your fingers. Once the butter is entirely rubbed in and the texture resembles coarse sand, add the cheddar cheese and lightly toss.

Next, make a slight depression in the mixture and pour in the wet ingredients. Mix as much as you can with a wooden spoon, then turn out onto a lightly floured surface and try to incorporate all of the dry ingredients into one large boule.

Place in a cast iron skillet and flatten the top slightly. Using a knife, score a cross into the top about 1 cm deep. Bake in a 400 F preheated oven for 40 minutes or until an inserted toothpick comes out clean.

As mentioned earlier, soda bread can be made from soft white flour, oatmeal, or barley depending on where you live. However, Brown Irish Soda Bread made from wholemeal or wholewheat flour (which is often sweetened) is also popular.

I’ve added more than a few extra ingredients to the basic recipe (butter, cheese, beer, molasses, and rolled oats) and only a portion of the flour is whole wheat. Still, the texture and flavour are remarkable.

Try these other savoury additions in your next loaf: other cheeses, bacon, green onions, sundried tomatoes, nuts, or seeds such as caraway, fennel, or dill. Alternatively, sweet versions may include: raisins or currants, dark chocolate, coconut, figs, and cacao nibs. The variations may not be traditional but they could be delicious!

This bread is best eaten warm with a generous slather of butter. However, if you do have leftovers, wrap them tightly in a plastic bag and eat them within 2-3 days.

You can freeze it too but it’s just so simple to make, I would suggest just making a new loaf!