I’ve missed it…gah! My very special, only comes once a year bloggiversary! Dish ‘n’ the Kitchen turned four on January 14th and I guess I’m totally in character with being four since I got distracted and played around instead of focusing on making a very special cake. I don’t know how many four year olds make special cakes (other then play doh or doo doo cakes) but when you’re a blogger, being four calls for a real hones-to-goodness fancy cake. After all…’a party without a cake is just a meeting’, right?

The little box of awesome baking supplies contained bottles of: pure organic vanilla extract, whole vanilla beans, and pure organic vanilla paste (YUM) as well as a jar of Rodelle’s amazing Dutch Process Cocoa which I used to be able to by in bulk at Costco. I hate it when you get used to buying something awesome at Costco and they suddenly stop carrying it. If I would have known, I would have bought a couple of cases and stored them!

The cake was pretty easy to bake, though I questioned the method at first. I usually cream butter and sugar together, then alternate adding the dry and wet mixtures. This one had the dry ingredients being added first and the butter incorporated later. Finally, when the wet ingredients are added the batter comes together. I wasn’t crazy about the texture of the cake and I’m not sure if it was the method or a consequence of high altitude baking. What I did REALLY like was the Swiss Meringue Buttercream because it had just the right amount of sweetness. It was fun to make the meringue and has a really nice texture for decorating that becomes more stable after cooling. 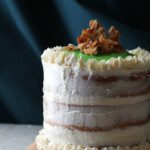 by: Bernice Hill based on a recipe by Tessa Huff in Layered (Page 216)

0.0 rating
A party without a cake is just a meeting.