Garde Manger is a must try Montreal Restaurant

I made a short list of possible places to visit while in Montréal and ended up making a reservation for two at Garde Manger, well in advance of our day of arrival. We arrived in Montréal with no travel issues and just had enough time to check in at Le Westin and get settled before our appointed time. I’m really glad we gave ourselves plenty of time to walk through Old Montréal because we started off walking in the wrong direction and ended up taking a more ‘scenic’ route. We also walked by Garde Manger several times because it does not have a sign and looked fairly dark. The only reason we found it was because of the shop number. 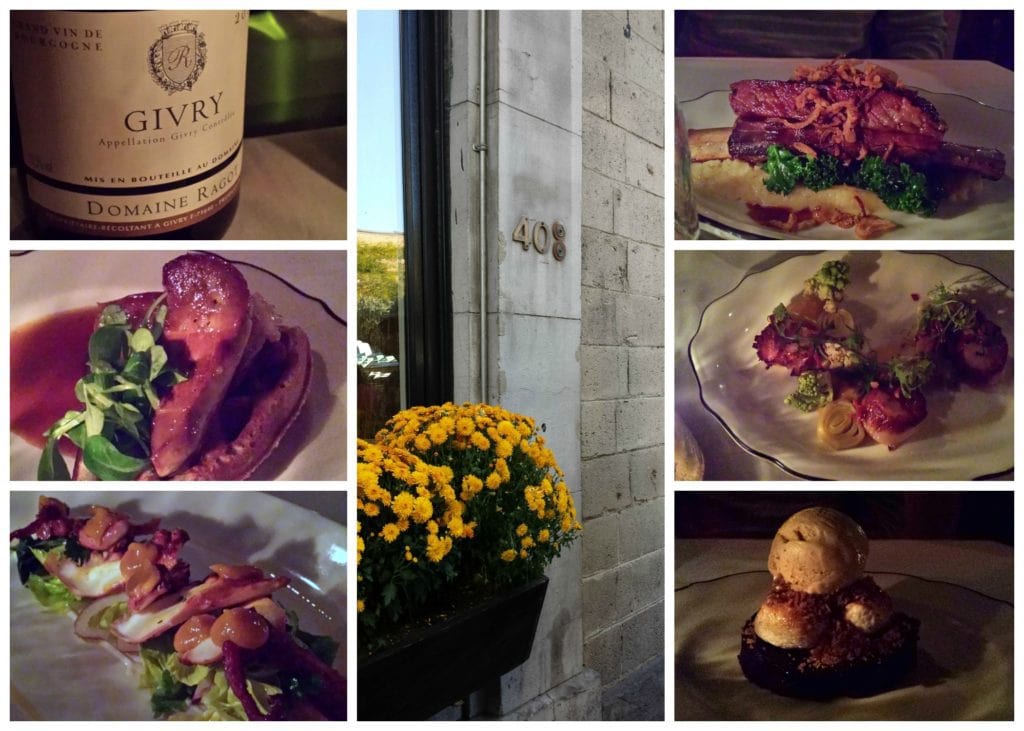 Though it’s been open for a while, reservations at this restaurant are hard to come by because it is so darn cool. People are primarily drawn to the ‘Chuck factor’ at first, but Garde Manger was actually opened slightly before executive chef and co owner, Chuck Hughes solidified his fame as a ‘rock star’ chef on the food network. Even though he doesn’t usually work weekdays, his chef de cuisine Josh Lauridsen and staff made our dinner an unforgettable event.

The menu at Garde Manger is a mixture of classic French with a twist of modern inventions like Chuck’s infamous Lobster Poutine. Hubby ordered the seared foie gras with duck confit sitting on a buckwheat waffle and was really happy with it. While seared foie gras and duck confit are French components, the maple gastrique and buckwheat waffle were a great way to inject a little Canadiana. I had a difficult time choosing my starter because I wanted to eat everything but in the end I ordered the octopus with fingerlings, crème fraîche, chorizo, and butternut squash purée and I didn’t regret it for a second.

Hubby went with the short rib for his main. The meat, vacuum-packed and slow-cooked at a low temperature for 60 hours at 60 degrees, had great beefy flavour and a melt in your mouth texture. It was served upon a large pile of Gouda mashed potatoes and this made hubby a happy man. For some reason I was really feeling the seafood so I ordered the seared scallops with leek, romanesco, speck, and more butternut squash purée. Everything was cooked, seasoned, and plated to perfection but I was left a little bit hungry. I had chosen two fairly light dishes on purpose so that I could end our dinner on a sweet note. While all the options sounded tempting, I was drawn to the s’mores dessert because it involved marshmallows and I am a sucker for marshmallows. The decadent chocolate brownie, topped with warm, gooey marshmallow and graham crumb and vanilla ice cream was the perfect ending.

We left Garde Manger well satisfied and ready to paint the town ‘rouge’. Another of my ‘on the Montréal list’ places to visit was the Dieu de Ciel micro brasserie and I knew that if we didn’t go together that very night, I wouldn’t get to visit any of the great micro breweries in Montréal at all. We hopped in a taxi and arrived to a very packed brew pub, however, luck was on our side and we grabbed seat at the next available table in no time. We had some fun trying to decipher the menu of French beers and I didn’t realize I could have ordered a tasting trio until it was too late. Instead I got stuck drinking a whole pint of Saison de l’argousier; a seasonal brew with buckthorn berries that I really didn’t enjoy at all. I didn’t know how I was going to finish it but felt that I just couldn’t leave it there. Hubby ordered a pint of the Rosée de Hibiscus, a nice hibiscus flavored wheat beer that turned out to be quite tasty. After I choked down the last of the Saison, I ordered a tasting trio; the Rosée de Hibiscus, Route de épices (peppercorn rye beer), and the Péché Mortel (imperial coffee stout). They were all delicious and I wish I could have sampled more but I had to get going early the next morning. 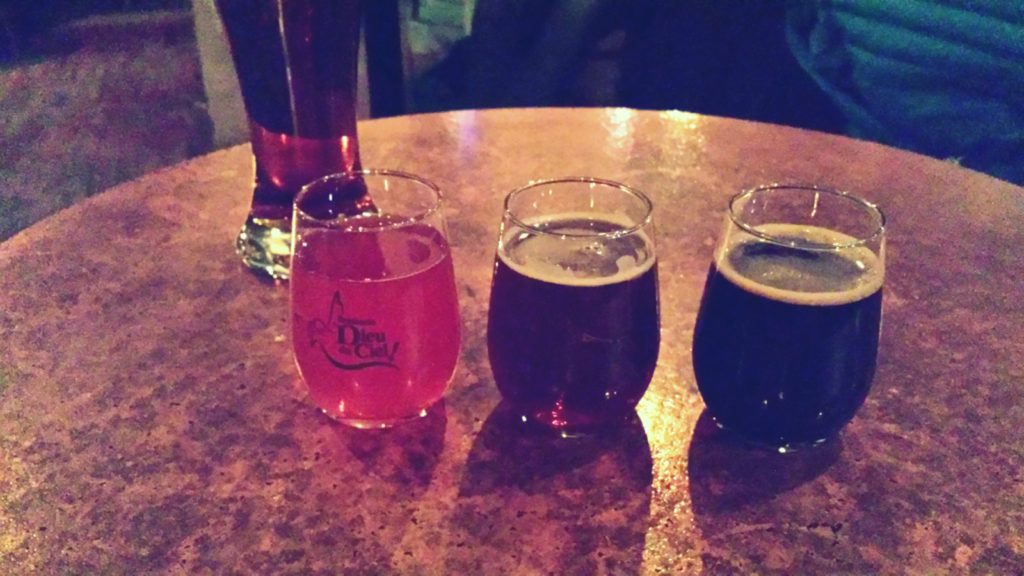 Where Hugo, I go – A visit to Hugo Paris