Though the light breakfast from our hotel was adequate  for most days, we got really tired of the stale pastries and mandarin oranges. The breakfast never changed so it was a bit tiring, merely a filler until we found something better later on that morning. There were two days where we needed a more substantial breakfast later on in the morning. The day we went on the Swamp Tour, which left at noon and didn’t finish until 4 pm and the day we left for home, also around noon. Luckily we spotted Jaegerhaus early on in our stay. Kid number two wanted to go there and eat German food (Bless her little German heart!) but I denied her because in reality we were there to enjoy local food. One could argue the longtime German presence within NOLA would certainly make German food ‘local’ but I was more interested in fresh fish, shellfish, and Creole/Southern flavours. That said, Jaegerhaus is probably the best place to go for breakfast in the French Quarter and we enjoyed both breakfasts we had there.

On Sunday before our tour we were entertained during the short wait for our food by a server named ‘Baby’. She had a great sense of humour and taught us a game we could play using only paper (which they use to cover the tables) and pens. It passed the time while we sipped our juices and coffee though we abandoned the game quickly when our food came. I really had no intention of taking food photos of our breakfasts (really!) but Baby mentioned I should get my camera out because the food is photo worthy. How did she know? 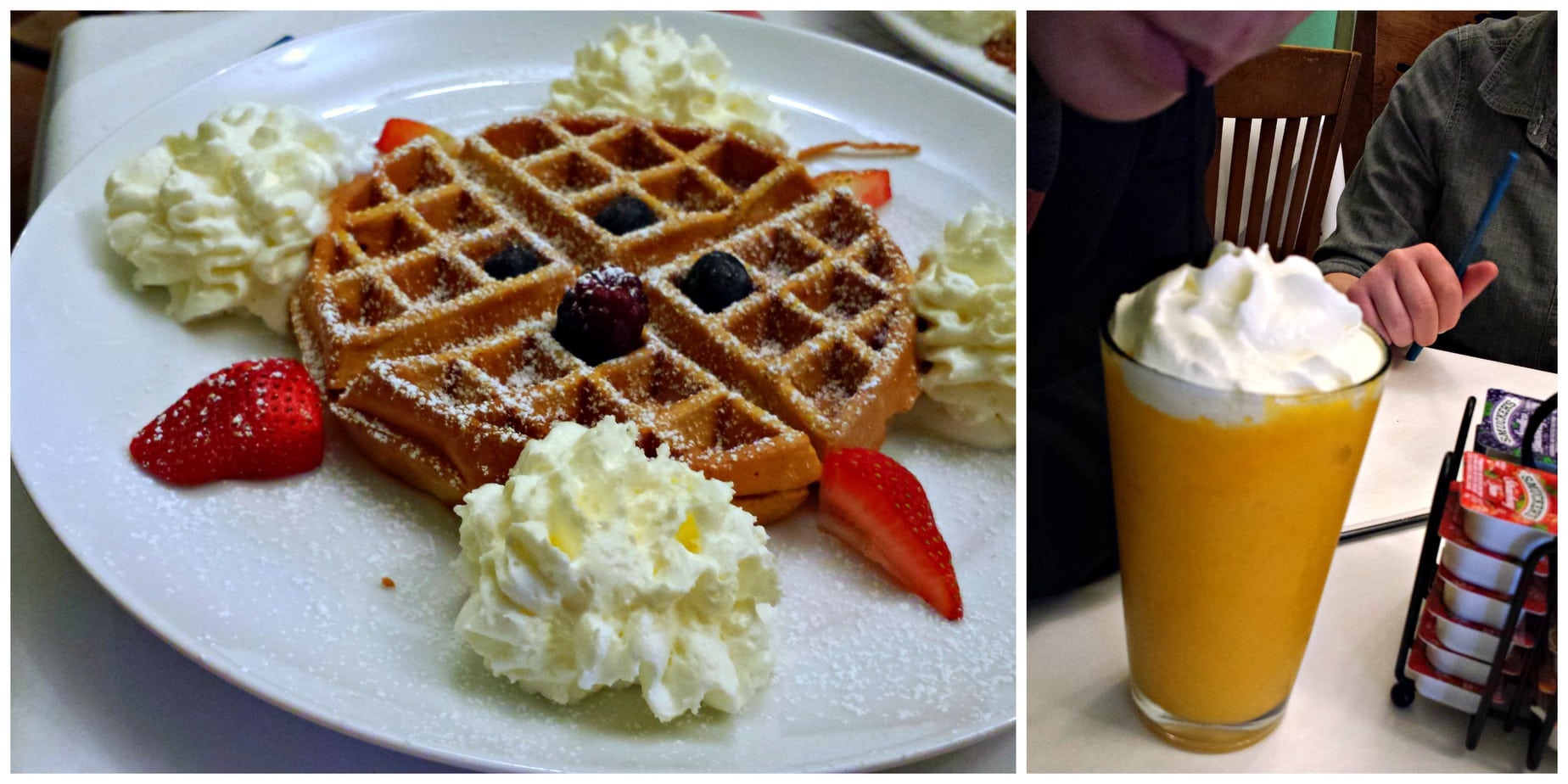 Kid number two ordered the French Toast which she promptly designated as the Best French Toast she ever had. In fact, she ordered it again upon our return visit. Both kids opted for a side of bacon. There just wasn’t enough meat on the plate, apparently. 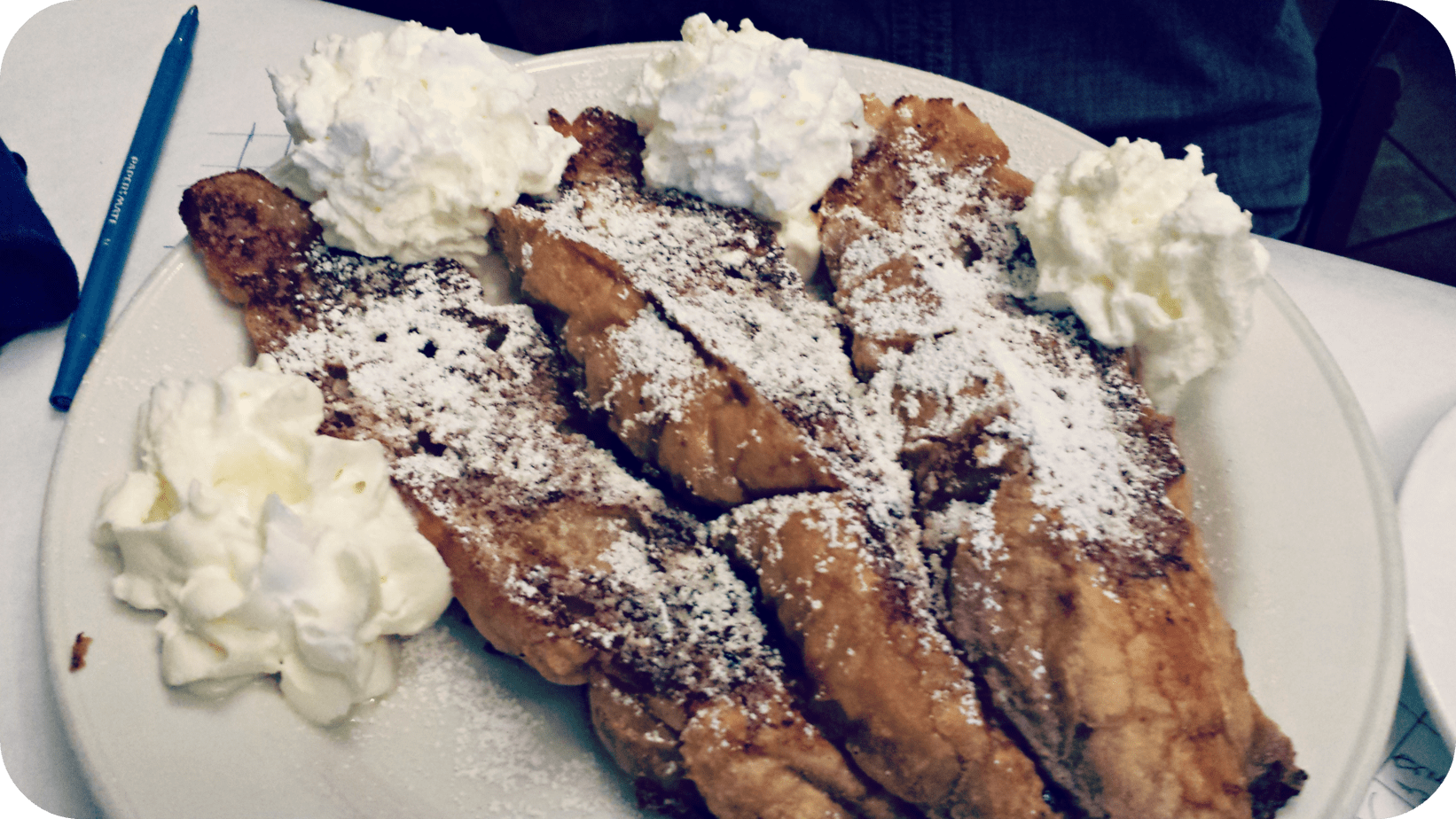 Hubby surprised me and ordered the Bavarian Crepe. It came loaded with eggs, ham, bacon, onions, peppers, tomatoes, and cheese; topped with hollandaise sauce, two strips of applewood bacon, cherry tomatoes, and chives. To me it looked more like a wrap but maybe that was just the presentation. 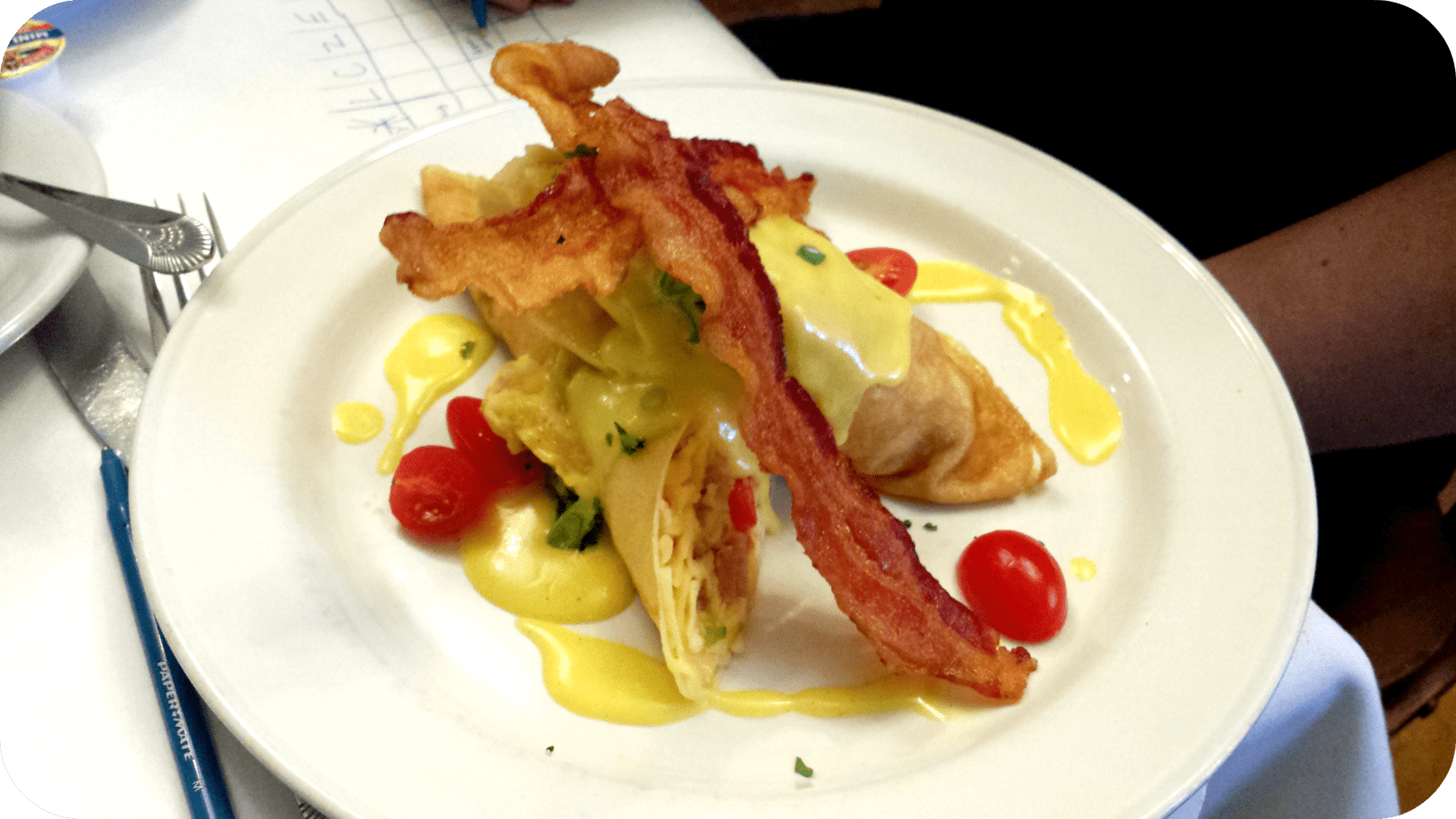 Despite having forsworn the eating of German food I opted for the Traditional Flammkuchen because it was something I had never heard of before. Baby described it as sort of a breakfast pizza but with a thinner, crispier crust. The toppings on the Traditional were creme fraiche, caramelized onions, applewood bacon, sprinkled chives, and brie cheese. It was really good but also salty and a bit greasy. It definitely stayed with me all day.

As I mentioned earlier we felt that this was the place to go before the long trip home. I regret not taking a better photo of Kid number two’s French Toast but she definitely had no regrets ordering it a second time. Kid number one was feeling a bit adventurous and carnivorous so he ordered the Sausage Omelet. Among the eggs were New Orleans alligator sausage, chorizo, crawfish sausage, tomatoes, peppers, scallions, and smoked gouda cheese. This protein feast came with a huge side of hasbrowns (or grits) and toast. 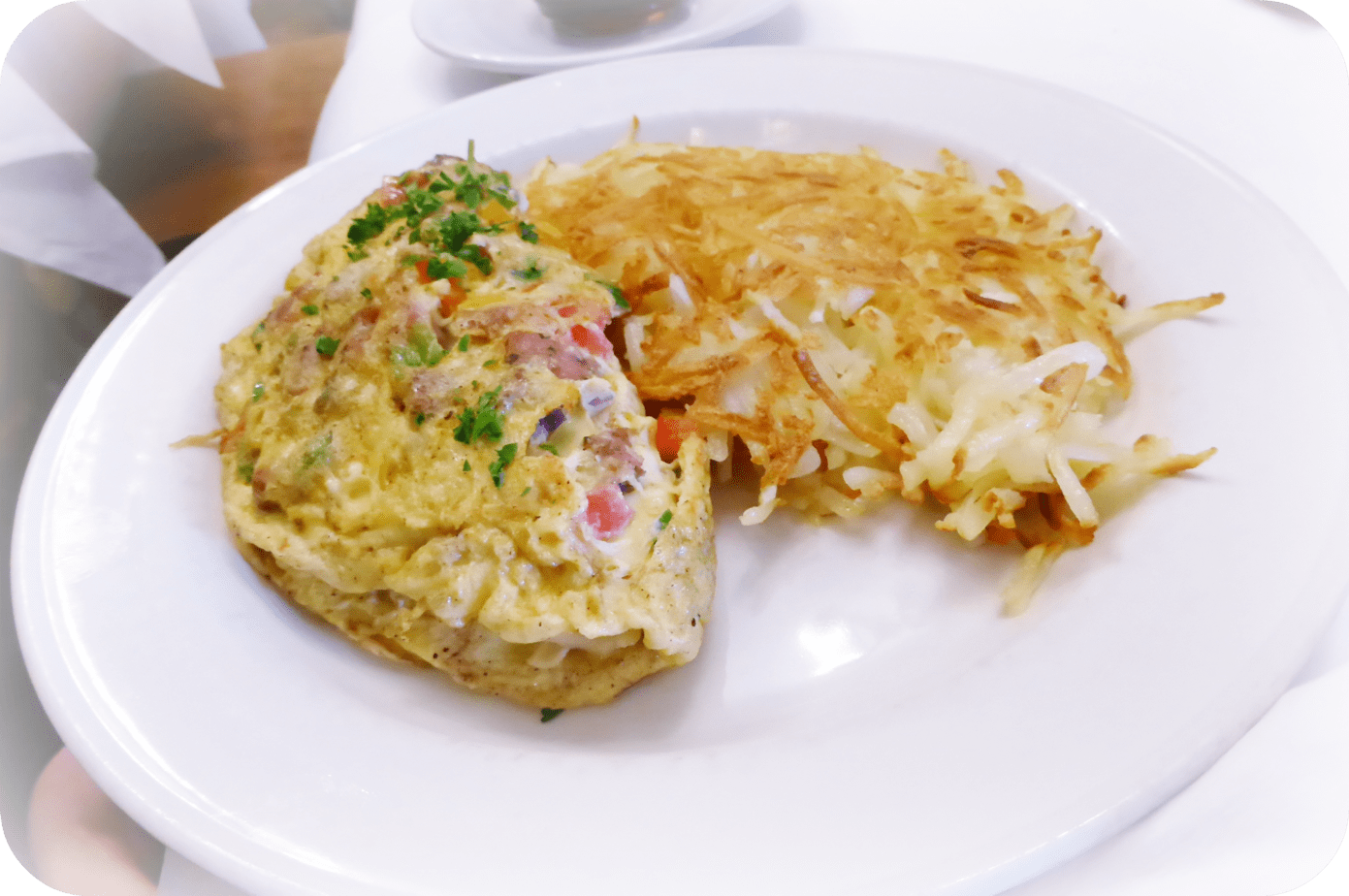 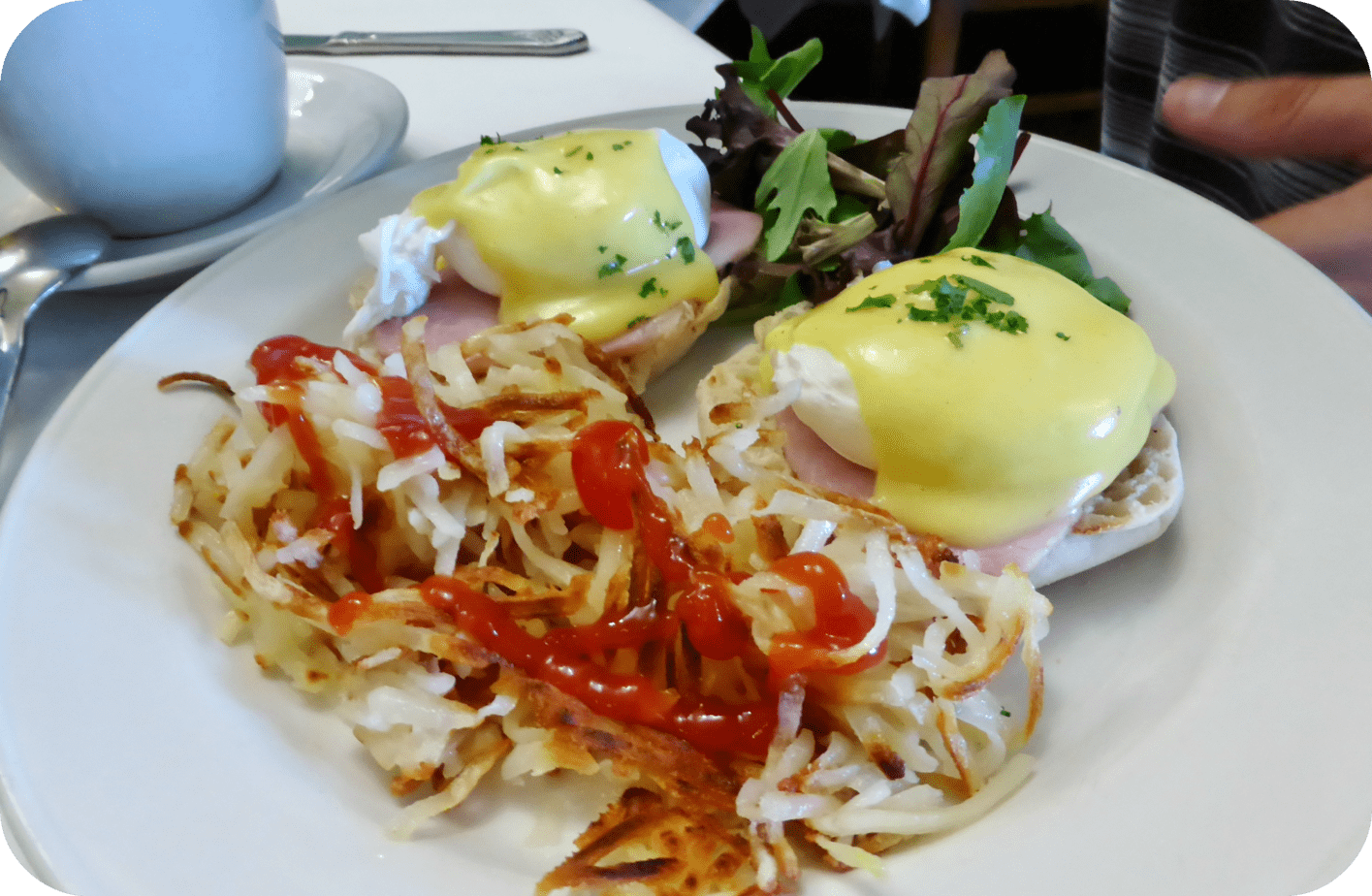 And I decided on the Eggs Florentine. It has lots of spinach greens and smoked salmon. 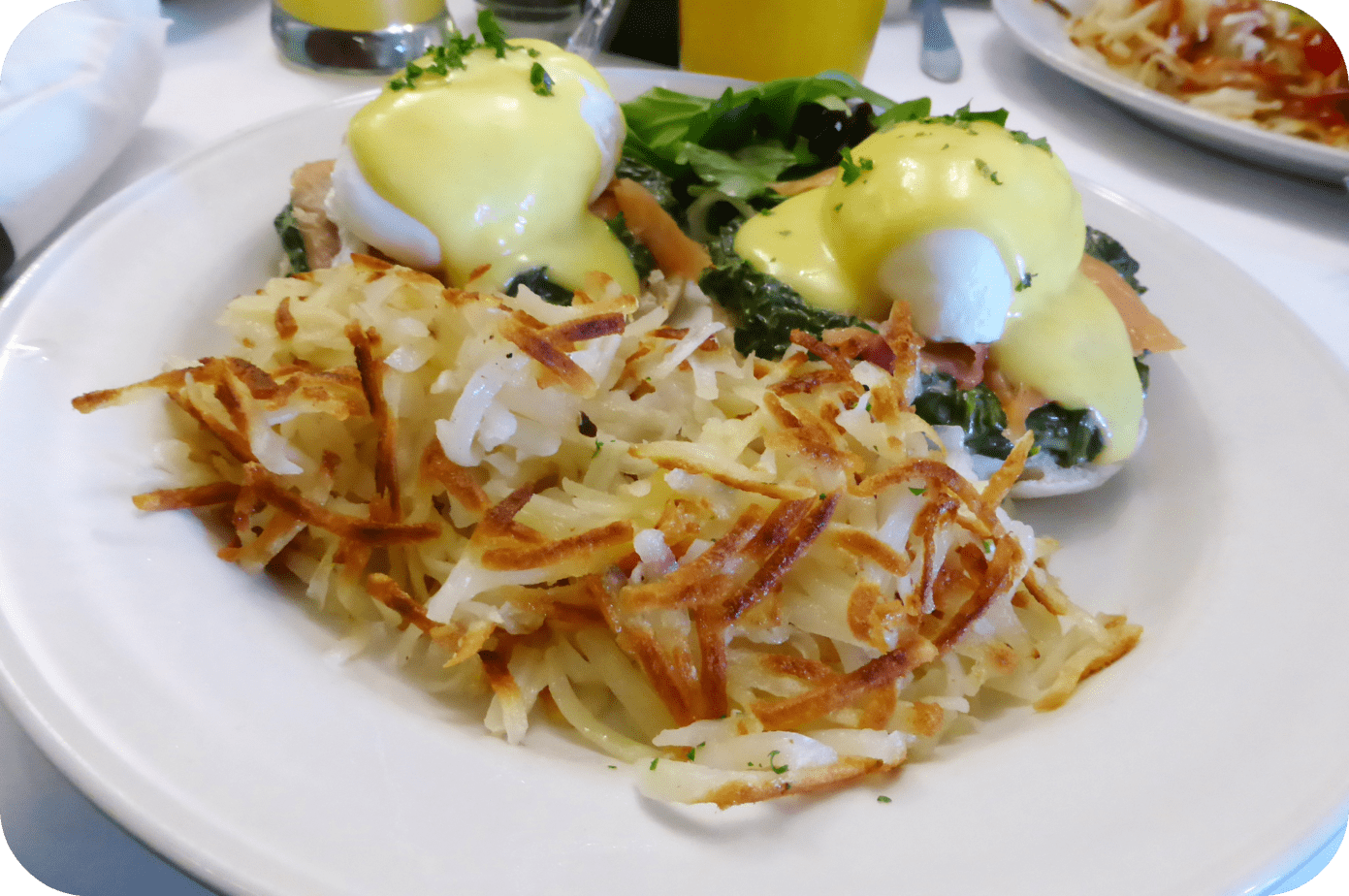 If you’re ever in NOLA, be sure to stop by Jaegerhaus for a great breakfast. They also have a nice selection of German Beer…also served at breakfast.