When I think of this phrase, I think of my Grandma. She had a great talent and curiosity for baking cakes. Her specialty for sure was chiffon cakes. I don’t know how they turned out so well as she didn’t have the lightest touch but any cake that came out of her kitchen was a great cake, indeed.

I will basically use any excuse to bake a cake. If someone is coming over, I bake them a cake. It’s just what I do, it’s in my blood. Yesterday was my birthday and of course I count that as an excuse to bake a cake. Don’t feel sorry for me because I’ve done this for a long time and, while it would be nice to have someone else’s baking for once, I am content to do my own. I am also excited! I’ve been waiting for an excuse to try out a cake idea that I found years ago. Back then my ‘in laws’ were really into dinner parties and were baking amazing desserts, especially cakes. I found a recipe for a chai cake and thought it would be really something they would like. I’m not sure if they ever tried it, but I’ve been thinking about it ever since and so, with my birthday as an excuse I am baking myself a chai cake.

Since I have misplaced the original recipe that I wanted to use, I searched around online for a decent recipe. I found one from Joe and Sue that sounded amazing. I had some leftover whipping cream from the Carbonara on Saturday which I mixed with some half and half to make up the full 1 1/2 cups needed. 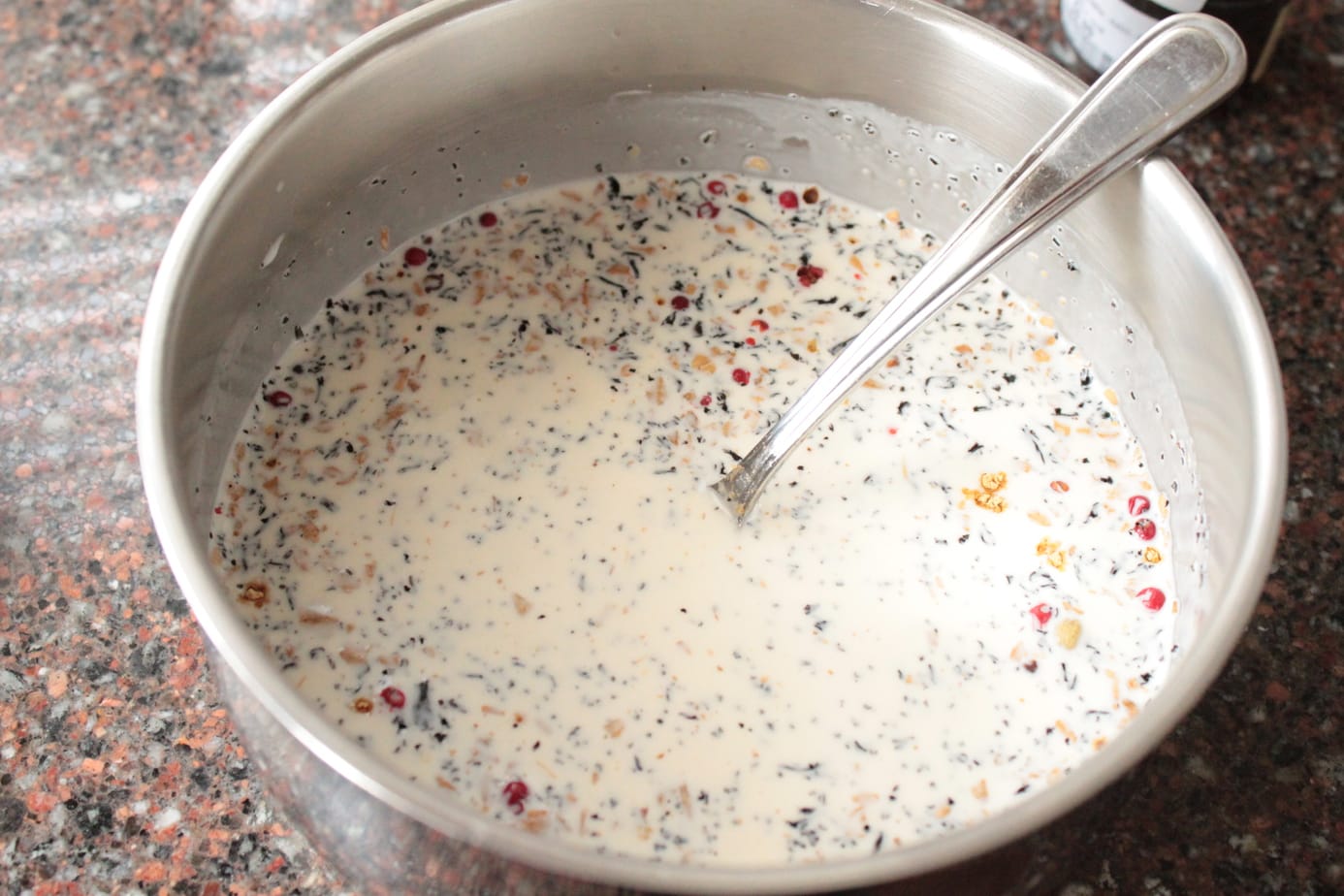 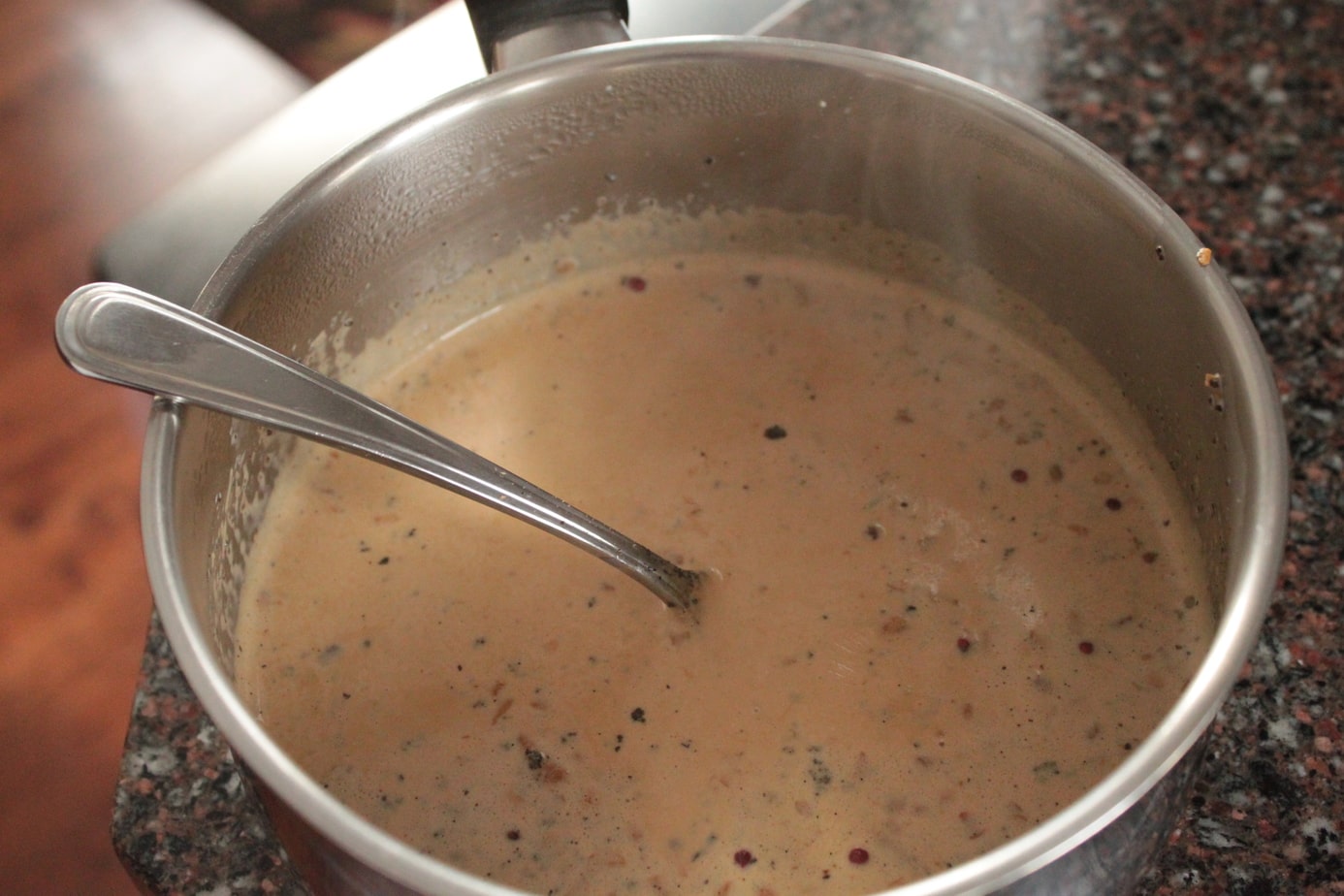 I admit to having had some trouble with the method though. I would have preferred to cream the butter and sugar together then add the four eggs. It just makes it a lot easier to cream up that butter with the sugar I ended up with a lot of clumps of butter in my ‘pre batter’. Thank goodness this issue was eventually solved when I added the dry ingredients. I didn’t have three 8 inch round pans, but had two 9 inch round pans. I figured that if it looked like I had way too much batter in them, I would make some cupcakes for the kids. They were pretty disappointed when they came home to empty cupcake tins. 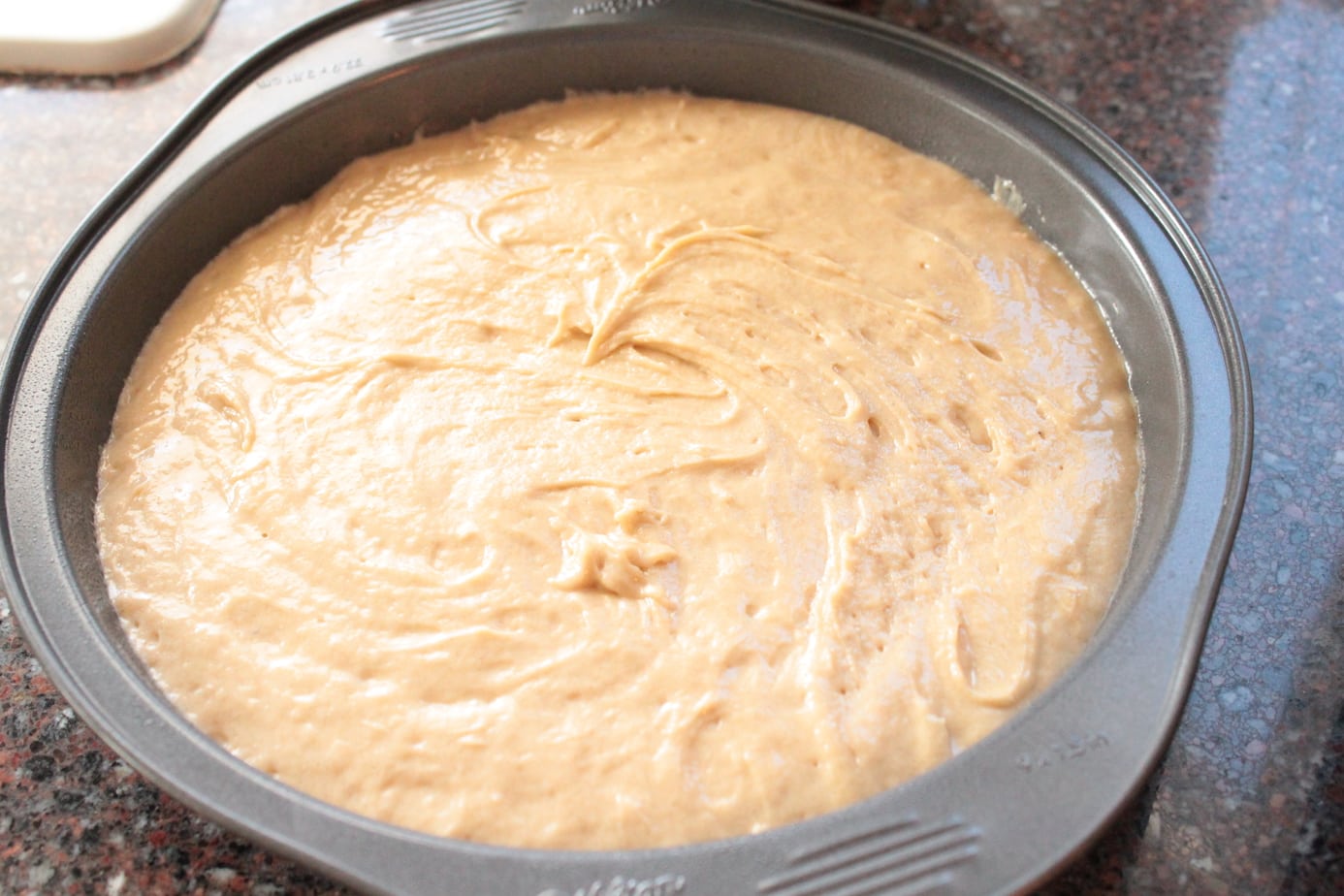 Of course, the larger tins meant a much longer baking time so I watched the cakes quite closely and they came out at about the 47 minute mark. I have to say that I’m a bit disappointed as they have sunk slightly in the middle even though they are fully cooked. 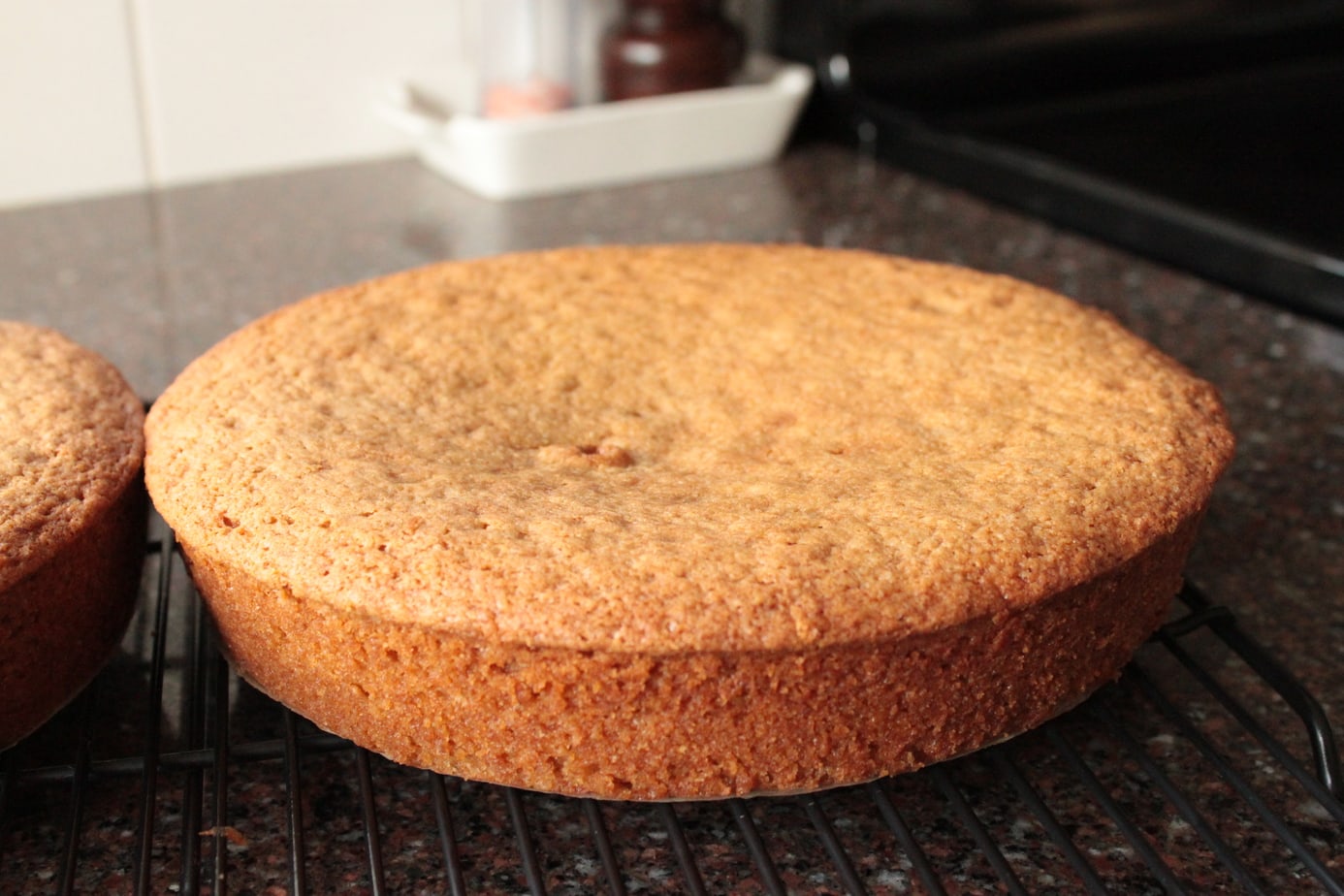 No matter though, a bit of frosting works magic making ugly cakes beautiful! I decided on a cream cheese cinnamon frosting to go on top. I loosely used the recipe from here but I decided to leave out the nutmeg and accidentally doubled the butter! Yeowch! Later, after tasting,  I decided it was way too sweet  and that I really didn’t need the cinnamon in there. Just a plain cream cheese frosting would have been delicious. Or even better, a dollop of whipped cream and nothing else. 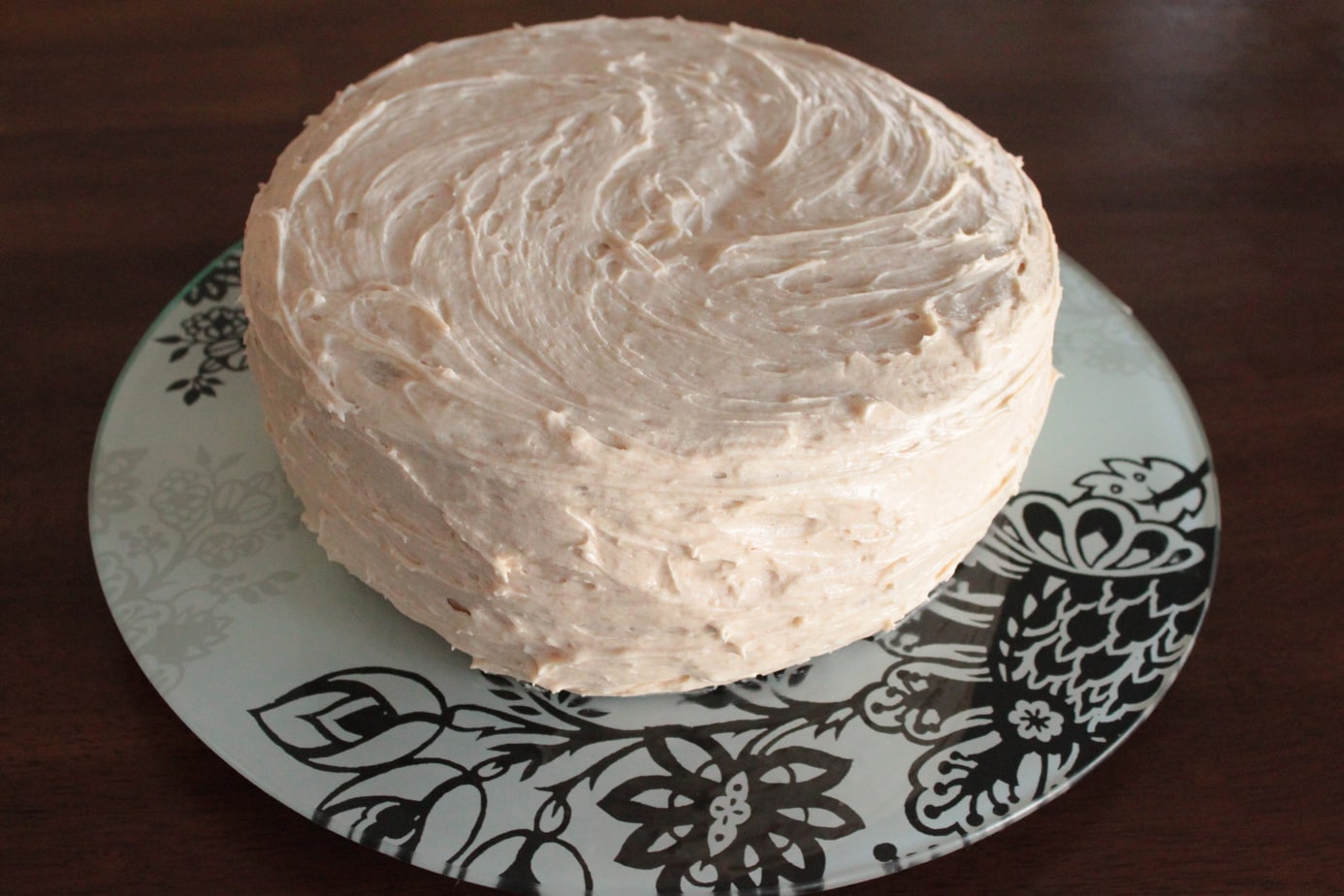 With the cake made, I was very excited to get a text from a great friend wondering if they could pop by for ‘tea’ tomorrow night. Ah, ‘of course’ I text-ed back (smiley face). Little do they know what form their tea will be!