Where My Story Began

Though I may be Canadian in the most general of definitions, I, like many other Canadians also identify with the cultural pieces of my heritage. My grandparent’s families made the long journey to this country and settled into Saskatchewan. There, they merged their cultures together to form one Canadian identity. Each cultural influence has had an important part in shaping me as I am today. I never think of myself (or Canada) as having one static culture, but more as a fluid culture that has a life of it’s own. I love that we are all so alike in our differences, I find it unifying.

Using food as a medium, I have begun to explore my German background. I’ve had food influences from both sides; the Leaderhouse and Herzog grandparents. It was through them that I became exposed to a bit more German cuisine and culture (we’re talking sausage making, sauerkraut, pork hocks, and spaetzle).

My paternal Grandmother, Grandma Leaderhouse was of pure Hungarian descent. She retained a wonderful accent throughout her entire life, even though she had been born in Canada. Grandma grew up speaking Hungarian but eventually lost the ability to speak her mother tongue. She passed her love of bacon to me (Hungarians love their bacon and smoked sausages). She did make poppy seed rolls, but never anything more ‘Hungarian’ than that. It makes me sad, that cultural part of my past remains lost and I would love to learn more about it in the future. 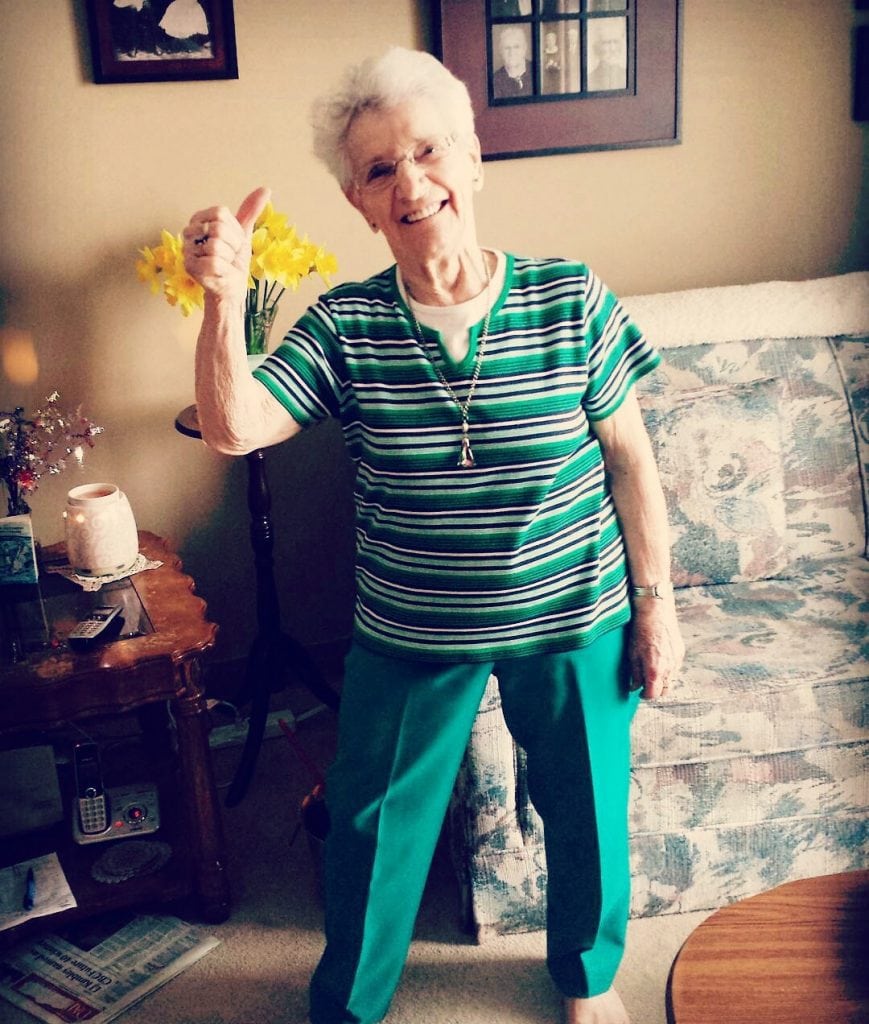 I am, genetically speaking, half ‘French Canadian’ and it’s the part of my cultural heritage that I know the most about. My grandma Lajeunesse’s (nee Ruel) family lived in the Saskatchewan French settlement of Debden, where she met my grandfather. She spoke only French until their children began attending an English school (it is odd that there was only an English school in a French settlement…) and now, at 92 years of age, she speaks a quaint mixture of ‘Frenglish’. By the way, she’s not your average ‘sweet’ granny. She’s 4 feet 9 inches of dynamite and she makes me laugh all the time.

Her cooking has probably made the most cultural impact in my life because it was through her (and my mother) that I experienced Tourtiere, farlouche (sugar and raisin pie), Tire sur la neige, baked beans, and maple fudge. There are quite a few of us cousins on the French side of the family and we were all taught the ‘Frenglish’ version of grand–mère, which has been reduced to ma mère. So, even though I know that ma mère means ‘my mother’, I use it to refer to my French grandmother. 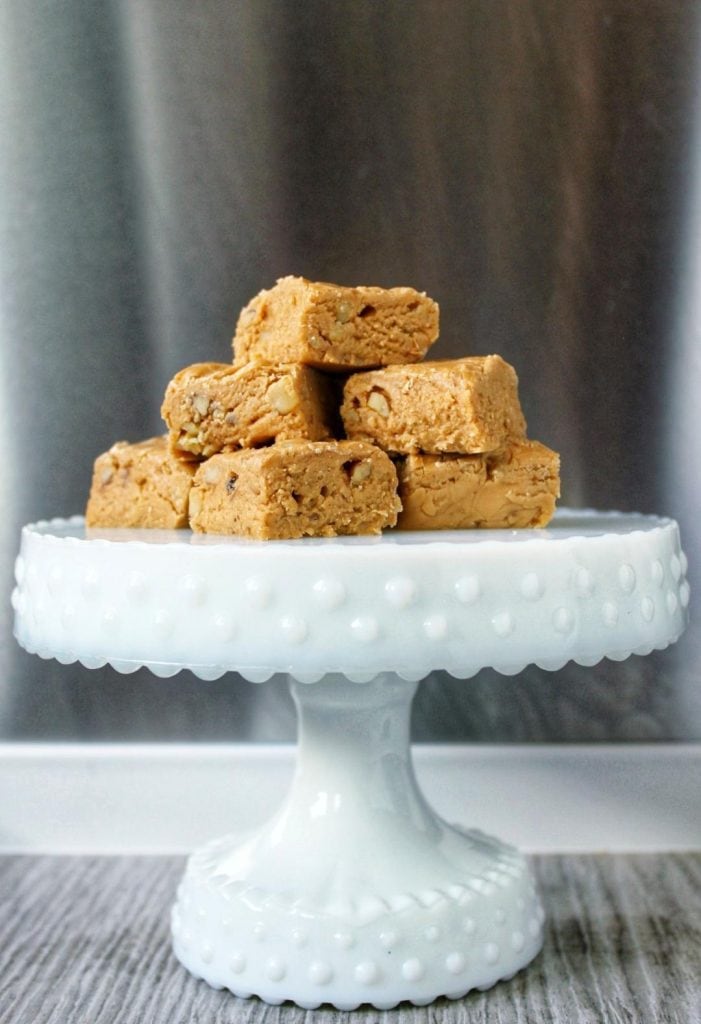 This recipe for Maple Fudge has been in our French Canadian family for generations. It is second in popularity only to ma mère’s homemade doughnuts at family gatherings.

Back in the day, maple syrup was too dear to be used in large quantities so maple flavouring was used. I’ve provided the original Maple Fudge recipe from our family cookbook with the maple flavouring. For a true Québecois experience, I’ve listed my corrections at the end of the recipe. Ma mère is getting up there in age, so she doesn’t make the doughnuts or Maple Fudge any longer. It’s time for us grandchildren to carry on the tradition! 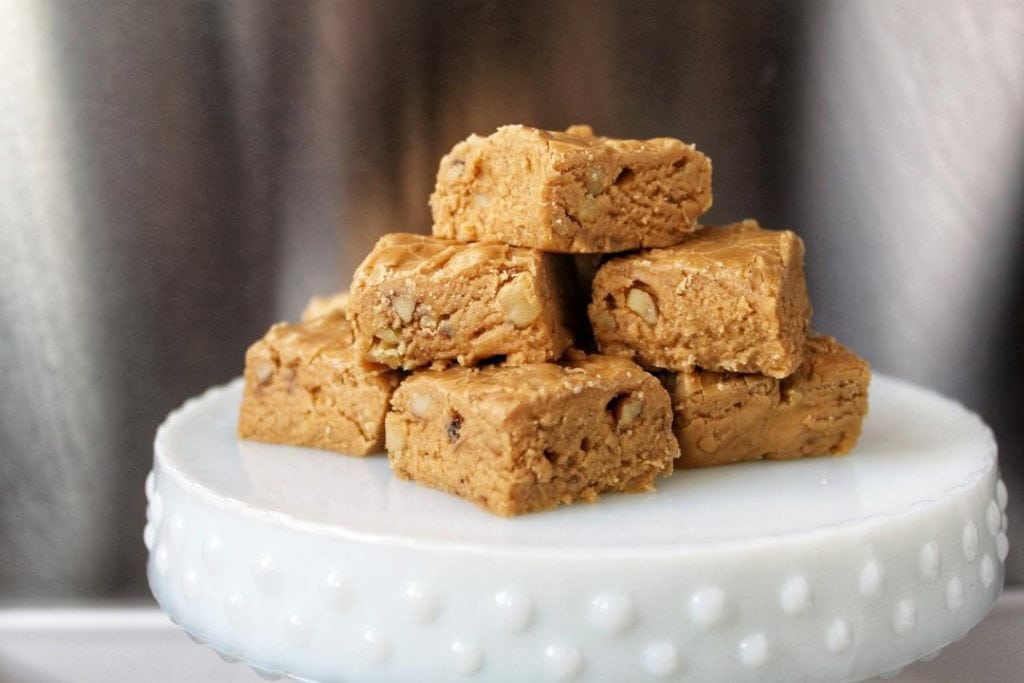