Experience the rich history, natural beauty, and culinary diversity of Lethbridge Alberta. This region has so much to offer!

Recently, I went road tripping to Lethbridge Alberta with Travel Alberta and Canadian Badlands. Our itinerary was packed with so much to see, experience, and eat I wasn’t sure we could do everything. However, I was so wrong! Our whirlwind prairie city adventure introduced me to many passionate people with rich cultural history and a present sense of purpose.

Lethbridge’s historical economy is closely tied to coal mining, sugar beets, and the railway. Around 1800 many Japanese arrived to work in the mines and construct the railway. This first wave of migration was followed by another around WWII . During this time, coastal Japanese were moved to internment camps, then shipped to the prairies to begin new lives. After the war, many stayed to build successful lives in Southern Alberta. 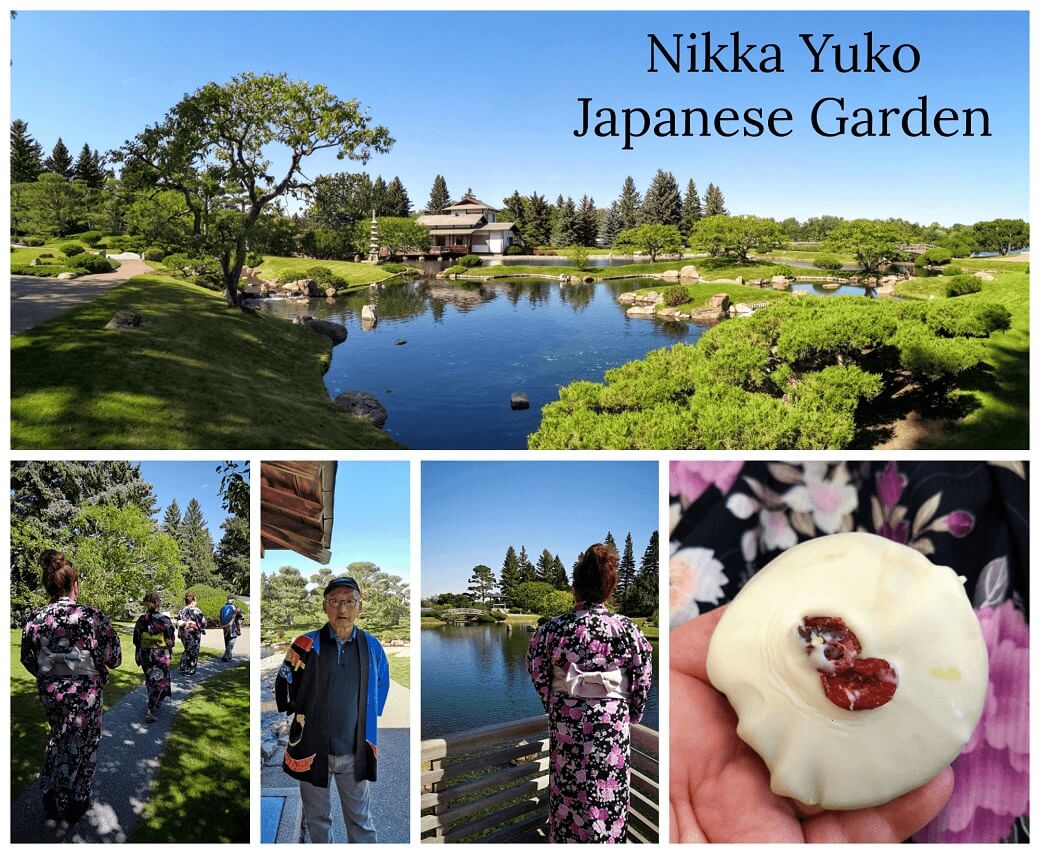 Built for the Canadian Centennial in 1967, Nikka Yuko Japanese Garden stands as a symbol of the friendship between Japan and Canada. It’s landscape is a reflection of the Canadian prairies and mountains in a Japanese style. The garden is rich in symbolism and contains both man made and natural components.

This year round wonder hosts many events including Sumo Sumo Sunday, Traditional Tea Ceremonies, Matcha & Mimosas, and Long Table Dinners. We took the guided tour to learn more about the symbolism throughout the garden and enjoyed the Yukata dressing experience.

Strolling the gardens dressed in traditional Yukata (summer kimono) was such a unique experience, I definitely recommend it, should you visit the gardens. Don’t forget to sample delicious Matcha Maple cookies! 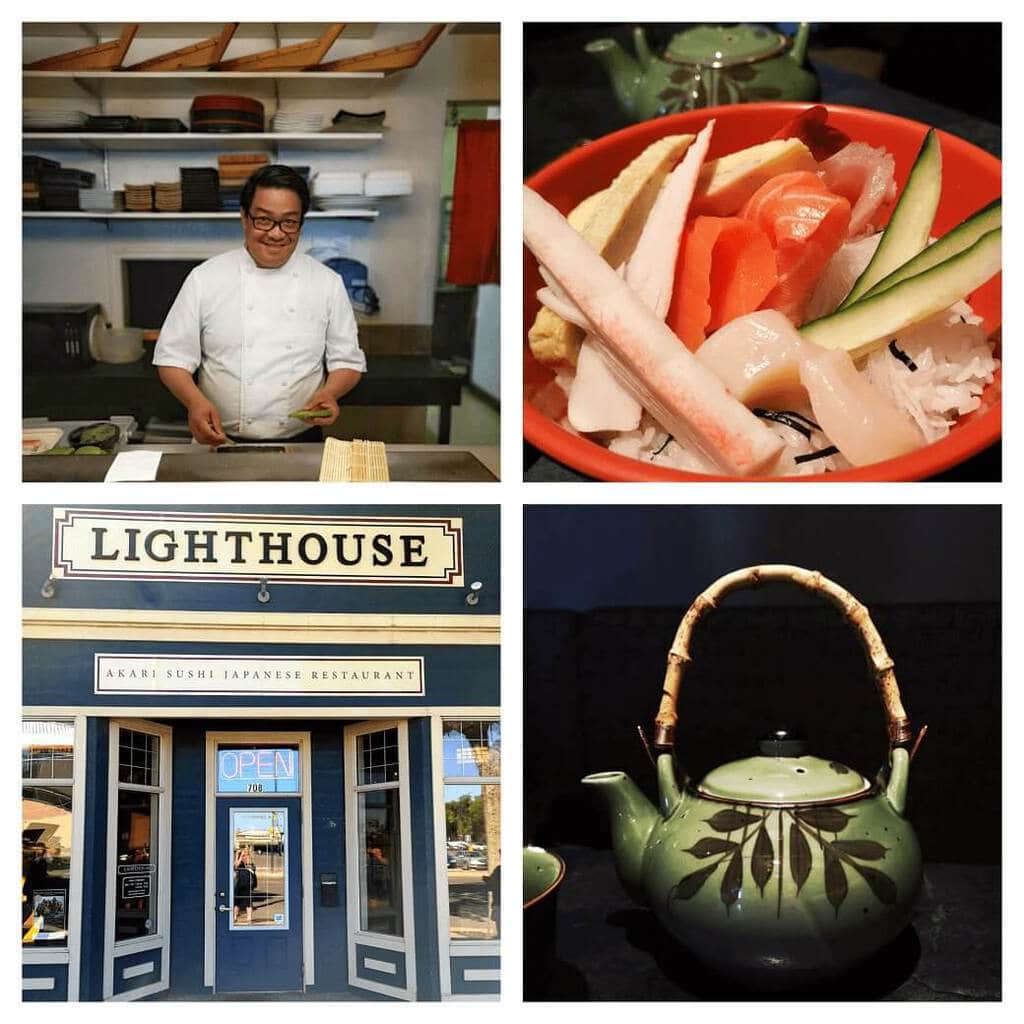 Lighthouse Akari Sushi Restaurant has been a Lethbridge favourite since 2003. The restaurant is comfortable and relaxing, with traditional Japanese artwork adorning the walls. Current chef Yukinari Takahashi has over 25 years of sushi experience and was formally trained as an apprentice and journeyman in Japan.

The extensive menu encompasses many Western sushi favourites as well as traditional fare. The sushi is incredibly fresh at Lighthouse, as fish is flown in daily from across Canada and from Japan. 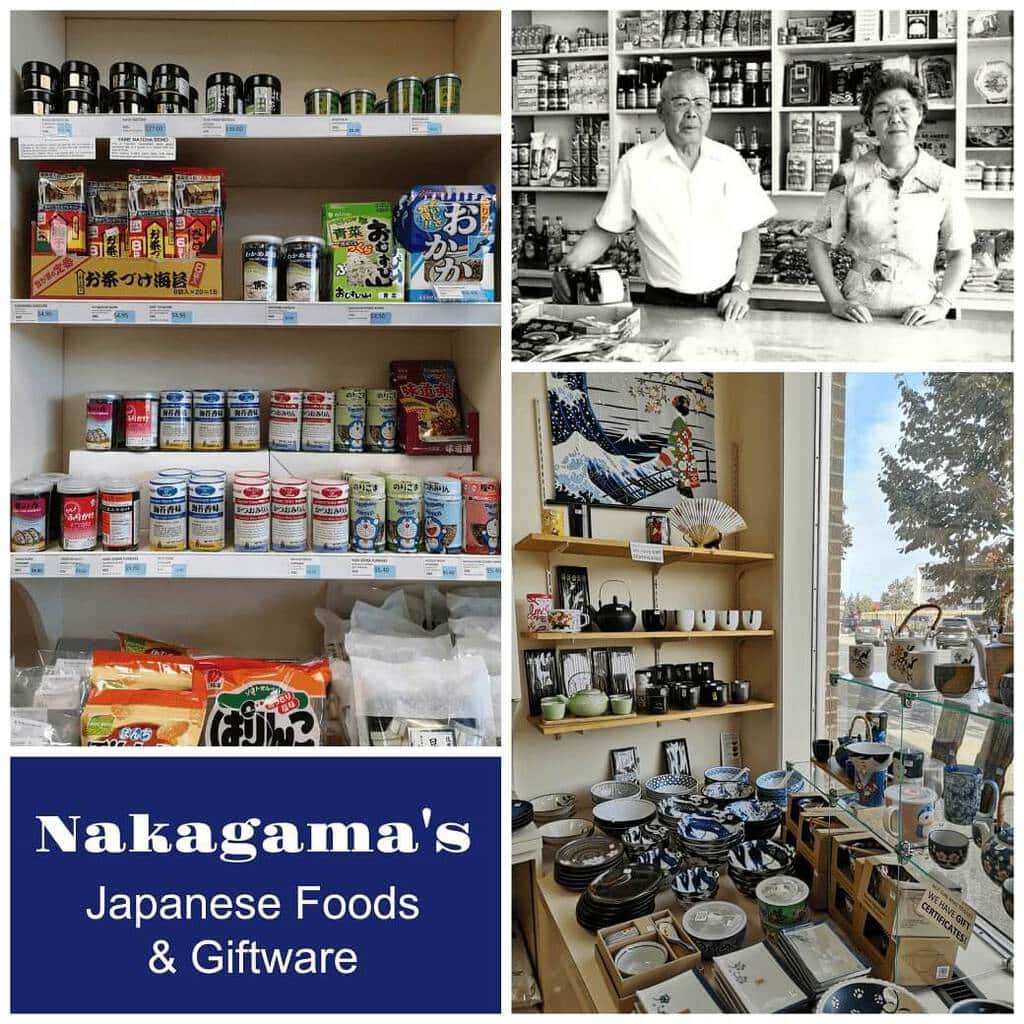 Ryutaro Nakagama opened Nakagama’s in 1947 to meet the rising need for imported Japanese groceries post WWII. Today, his son Ken operates this quaint shop in the heart of Lethbridge. Nakagama’s has a amazing selection of Japanese ingredients, cookware, and giftware; making it a favourite destination for foodies. I was glad we had brought a cooler because I couldn’t resist buying some frozen sushi grade seafood and some koji rice to cook/brew with at home. 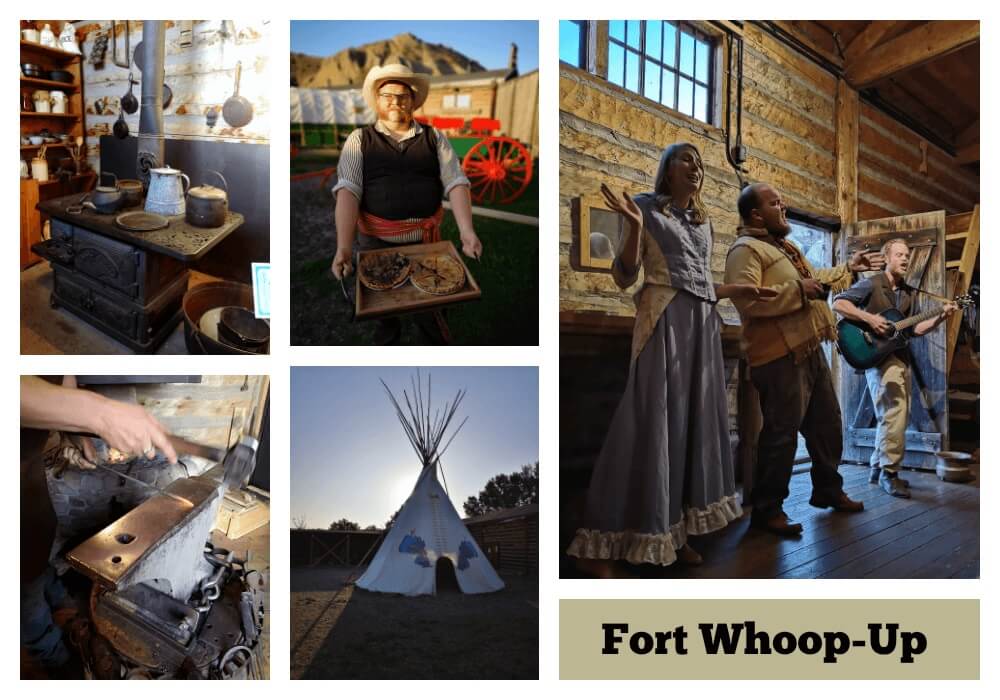 The History and Culture of Lethbridge Alberta

Lethbridge’s history comes alive with a visit to Fort Whoop Up. It is a complex story that includes the Niitsitapi (Blackfoot), other First Nations, Métis, Canadians, Americans, and British. Set among the gorgeous coulees of the Old Man River, you’ll be sure to gain a new perspective on the Wild West.

Visit the Fort from early May to late August and immerse yourself in the history during the fur trading era. Wander the Galt Museum while listening to the stories of the interpreters. Then, take a wagon ride through the Old Man River valley, it’s all included with your admission.

One not-to-miss new experience at the fort is the Dinner Theatre. It includes a guided Fort Tour, Pioneer style dinner, and theater performance. After the chili and bannock have disappeared, you’ll have a foot stompin’, rootin’ tootin’ time with the talented actors from New West Theatre. 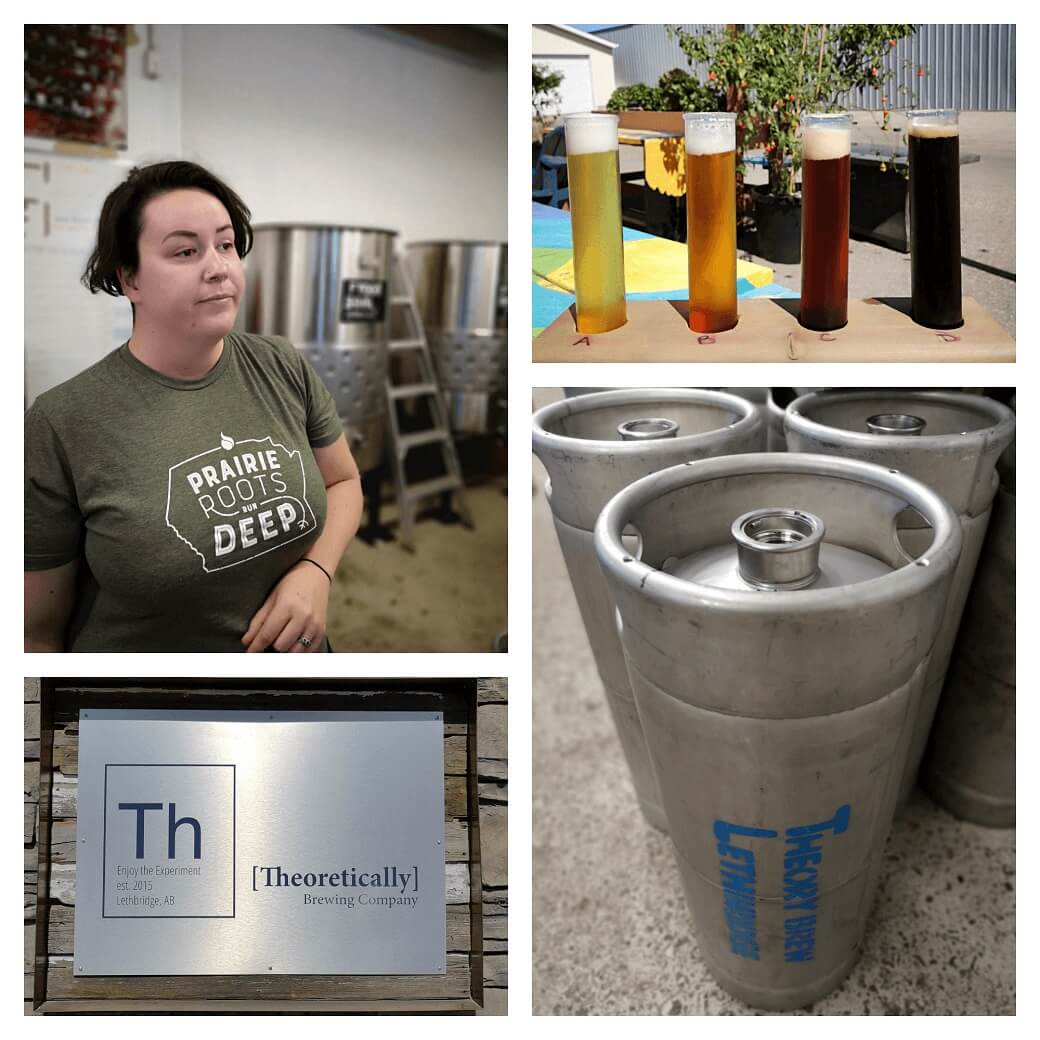 Feeling thirsty? You could drink some water but theoretically, beer is best. The craft beer scene began in Lethbridge Alberta in 2015 at with the opening of Theoretically Brewing Company. You could call them the OG Brewery Pioneers! Established by two self proclaimed home brewing nerds in 2012, they rely on careful calculations to brew their outstanding beer. Owner/Brewer Keltie Baird gives a wonderful brewery tour and a great explanation of your beer flight (served in test tubes). 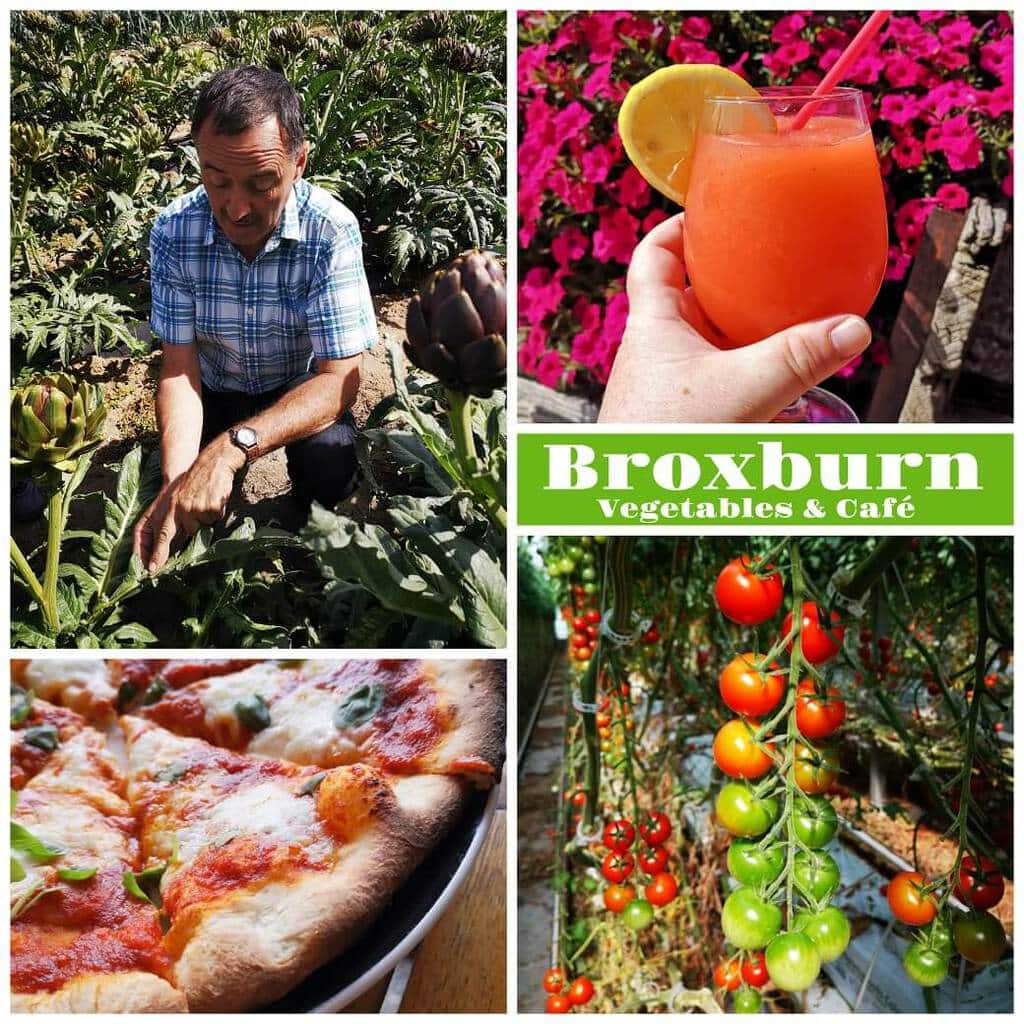 What does it take to build a vegetable empire on the prairies? Roughly 80 acres of land, gigantic greenhouses, and a wealth of gardening knowledge. At Broxburn, Paul de Jonge has invested a lot of time, money, and energy into growing his amazing produce.

If you tour the commercial greenhouse, you really get a sense of the scale of his operation. In the greenhouses, there are tomatoes and peppers as far as the eye can see! Paul spent so much time with us touring the outside gardens patiently answering all of our gardening questions. It is truly inspiring to meet such passionate food producers.

In addition to the gardens and greenhouse, you can pick your own strawberries/raspberries or buy them in Broxburn’s market space. We had a lovely lunch on the patio overlooking the gardens. The food is simple café fare, and contains as much fresh Broxburn produce as possible. 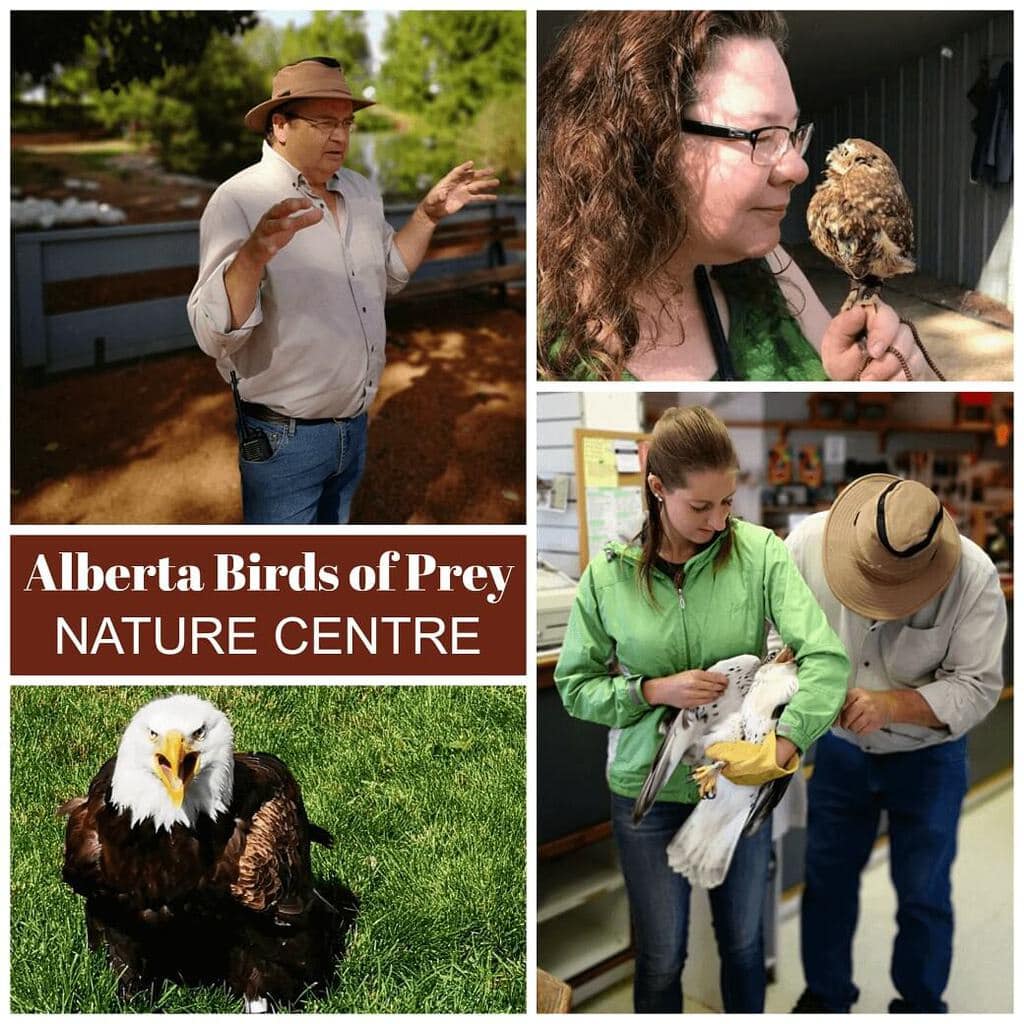 Have you ever held a Bald Eagle on your arm? It is at once, both exhilarating and terrifying. For bird lovers, the Alberta Birds of Prey Centre is a dream come true. However for birds of prey, the centre means survival. The foundation is committed to rehabilitating and releasing injured birds of prey back into the wild. They play an important role in prey bird conservation through captive breeding, population monitoring, and environmental stewardship.

The centre offers interactive educational experiences for bird lovers of all ages including the hawk walk, flying demonstrations, and bird photo opportunities. 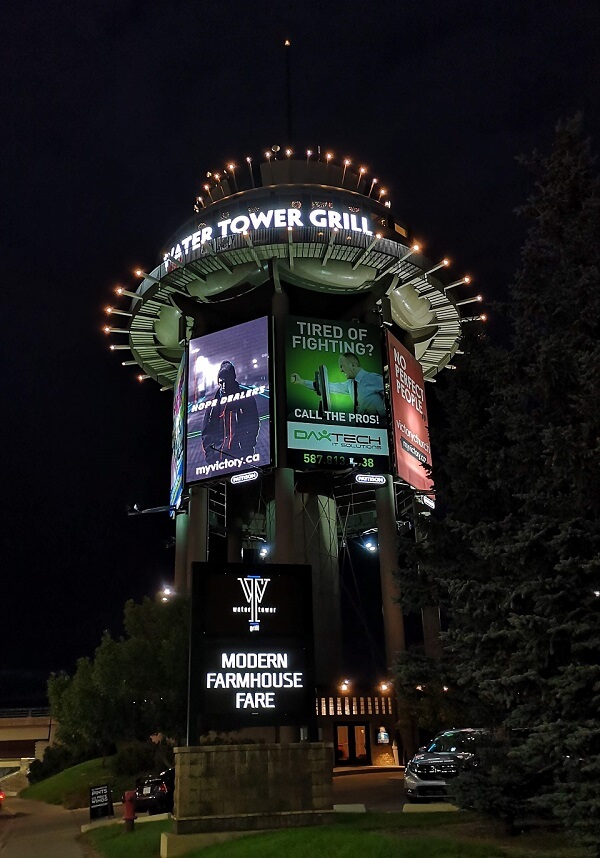 Once a source of much of the town’s water supply, this landmark has graced the Lethbridge landscape since it was completed in 1959. It was decommissioned in 1999 and slated for demolition. As a result of public outcry to the city to salvage it, the tower began new life as a restaurant.

The most recent 2019 renovations by Vintage Group are modern and reflect the tower’s original purpose. I love that the menu is a approachable yet the it’s the perfect spot for a special date or occasion. Stop in for ‘Hydro Hour’ for classic cocktails and the amazing smoked wings.

Road tripping in Alberta with Dish ‘n’ the Kitchen

Travelling to Lethbridge Alberta? Pin this article for later HERE.