Every year, not long after my birthday, hubby also turns another year older. This year his 40th birthday landed on a Thursday and on one of the busiest days that I’ve had in a long while. The poor guy almost didn’t have a cake at all, which is a bloody travesty in my books. There isn’t anything I like to do more than bake a cake.  The actual cake that I had planned out in my mind was this Brooklyn Blackout Chocolate Stout Cake (from Ovenly in Brooklyn) that I had spied on David Lebovitz’s Instagram feed and I really wanted so badly to bake it.

Alas, it was never meant to be, the execution of said cake just didn’t play out. I thought I had planned everything out: eggs, check; cream, check; blocks of butter at room temperature, check; stout beer, check. Did you notice any really important ingredient missing from my list? Yep, that would be cocoa. In this house with a superbly stocked pantry I might add, I could not find more than two tablespoons of dark cocoa powder. Such is life when you have cooking teens that like to bake brownies, I guess. I knew that if I made a trip to the store, the travel would greatly cut into my window of time I had set aside for cake baking, that being between 8 am and 12:45 pm on that day. I put my Brooklyn Blackout Cake dreams aside and thought about what other cake I could make that wasn’t chocolate.

Now to Bake a Rootbeer Cake

For once I didn’t want to do anything citrus related and it had to be a cake that I had the ingredients on hand for. I thought really hard about what hubby would like and came up with…rootbeer! Surely there would be all sorts of recipes on pinterest for rootbeer cakes. I had a look and quickly ruled out the classy {sarcasm} rootbeer ‘poke’ cakes and the ones that used boxed mixes. What was left after that was a lovely looking Root Beer Cake pin from Culinary Alchemy and I had just enough Hires Root Beer left from our recent trip to the Vintage Soda Company in Airdrie. I didn’t have any rootbeer extract on hand but I did have 3 cans of Hires so I set immediately to reducing one of them down to 2 tbsp of syrup. Did I mention that I finally began making this cake at 11:45 am? This left me 1 hour to reduce the rootbeer and get that cake in the oven. I decided to not worry about the recipe asking for cake flour and just went crazy with the sifter. I ground some tonka beans in my spice grinder and threw in about a teaspoon instead of using vanilla.

Everything worked out just fine. I got the batter into the pans with nary a second to spare…and maybe a moment too soon as I spied some lumps going into the pans which I quickly fished out. The minute I had the cake out of the oven and cooling on racks, I was out the door and on my way to my hair appointment. I had actually texted hubby in a moment of panic asking, “what would you like more for your birthday? A birthday cake or a beautiful wife?” HA! For the next three hours I tried not to obsess about how I was going to finish the cake because I knew I would be leaving for football as soon as I returned home. Somewhere in that time I was able to book us a table for two at NOtaBLE (which is conveniently located near the football field) and instruct our daughter on how to make vanilla butter cream. She saved the day by finishing the cake for me.

I dropped our son at the football field at the appointed time and met hubby at NOtaBLE for well deserved (and much needed) pre-dinner cocktails. After our delicious meal (he had the prime rib, I had pork tenderloin) we were able to watch the rest of the football jamboree. Our evening ended the way all great birthdays do, with cake! Despite the sorely needed extra mixing time the texture of the cake was gorgeous and we could actually taste the root beer. 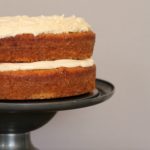 0.0 rating
What to bake the Rootbeer lover in your life.

I’m not sure what recipe my daughter used for the buttercream but any recipe will do. She added some caramel sauce to the buttercream (as per my request) but it was quite sweet…you are best to go with a butter cream that is more ‘buttery’ as opposed to ‘sweet’.