A Tale of Two Biryanis

Now that I’m back from vacation and cooking again I wanted to jump right in…with both feet! I don’t know if you have meetup.com where ever you are but there are meetups for pretty much every age, hobby, or fitness level out there. I’m part of several groups but I initially got involved via the geocaching meetup group. I then started to search around for more groups tailored to my interests but I was disappointed with the selection of cooking related groups. There were lots of foodie groups for visiting restaurants, one for vegans (not me!), and one based on water-less cooking (?). Eventually I got the notification that a new cooking group had been formed and it was based in the south of the city which was very close to me. I joined without hesitation.

The main reason for these meetup groups is to meet like minded people and the South Calgary Cooking Club was a great way for me to do that. I met many people in the first year of the group but it was the group leader, Ginni, that I really got along with. She kindly opened her home to some really fun classes and potlucks. She has an extensive cookbook and cookware collection and was one of the first people to encourage me to start blogging. I don’t know why I had thought about blogging for so long. All it took were a few words of encouragement and Dish ‘n’ the Kitchen was born.  Towards the later part of the year, Ginni’s life became pretty hectic and our meetings fizzled out. Now I am happy to say the Calgary Cooking Club is on it’s way again! Besides writing her own blog (mindfullyspiced.com) and starting up her own online spice business, Ginni’s Kitchen Ginni has also written and published her own cookbook and is the Cooking School Coordinator with President’s Choice. She’s a busy lady.

On Sunday the Calgary Cooking Club met at the Deerfoot Meadows Superstore location (where the PC Cooking School is located) to explore the cooking of a traditional Biryani.  Ginni is well versed in the use of spices, as the name of her blog implies, and though she is English at heart, she is also of Northern Indian descent with a little Persian thrown in.  She had all our ingredients lined up on the counter ready for us to chop up. Once the preparation was done, we began making the dry ground spices to use in the chicken marinade.  We added bay leaves, green and black cardamom pods, peppercorns, mace, black and green cumin, coriander and cumin seeds, and chilli powder together in the spice grinder and ground them until they were quite fine. We added the whole amount to a tray of chicken along some star anise and cinnamon sticks, taking care to coat each piece. Then we began the wet paste preparation. We added 10 green chilies, fresh cilantro and mint, yoghurt, fried onions, turmeric, salt, lime juice and oil to a food processor and gave it a good whirl so we had a nice sauce. This was also added to the chicken before we allowed it to sit for a good half an hour. Overnight would have been even better but we were trying to get everything done to bring home for dinner.

Biryani is primarily rice based so our next step was to prepare the rice. I soaked the rice in water for a bit to get rid of the excess starch. While the rice was soaking, we put a huge pot of water on to boil with some salt, bay leaves and black cumin. We drained the rice and added it to the hot water, making sure to stir it quite frequently until it was about 70% cooked.  Since this was a new technique to me, Ginni explained that you must periodically check the grains by squeezing a grain between your thumb and fore finger. If the grain doesn’t break but mashes and you can still see some hard bits in the grain, the rice is ready.

To make the Chicken Biryani stove top we added one layer of marinated chicken on the bottom of a large (preferrably cast iron) pot. Then we placed a layer of fried onions over top and added a large layer of rice. Traditionally bright coloured dyes are drizzled onto the top layer to make the rice dish more appealing, then some ghee and rose water are drizzled over top of that. Lastly we added a layer of fresh cilantro and mint and some toasted almonds and cashews. Ginni made a simple dough with flour and water and placed it around the edge of the lid, then pressed it down over the top of the pot to seal in the moisture and heat. The Biryani was then cooked on high for about 5 minutes, then for another 30 minutes on low and allowed to sit for another 40 minutes.

In the meantime we got to work on the Vegetable Biryani. To a large pot full of carrots and cauliflower we added the same ground spices and wet paste but added more yoghurt and cooked it on the stove until the vegetables were softened. We placed a layer of veggies into the bottom of a baking dish and covered it with a layer of rice. Then we added yellow colouring, clarified butter, fried onions, and fresh herbs. We repeated the layers again then topped the last layer of rice with the usual with some roasted nuts for good measure. We started the biryani in the oven at a high temperature for about 20 minutes, then reduced the heat and cooked it for another half an hour…though I’m not exactly sure on the times and temperatures.

For a lovely final touch, we hard boiled 10 eggs, then shallowly scored them with a small knife lengthwise before we rolled them in a mixture of turmeric, garam masala, and salt. Then we added clarified butter to a large pot and sauteed some thinly sliced red onions until they were nice and soft. We added the eggs to the onions and fried them for a while. When they were warmed we sliced the eggs in half lengthwise and added them to the plate of Biryani. 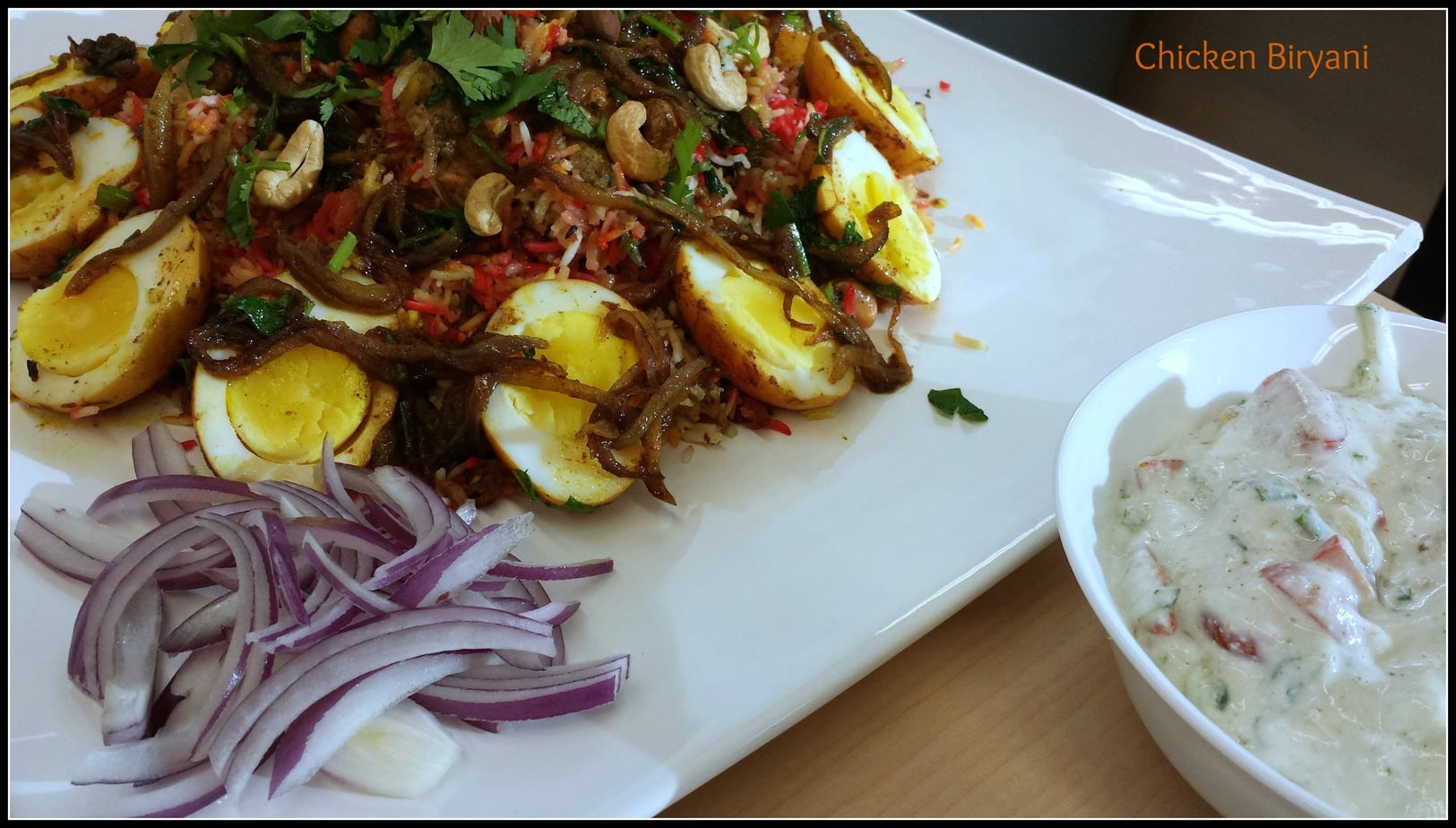 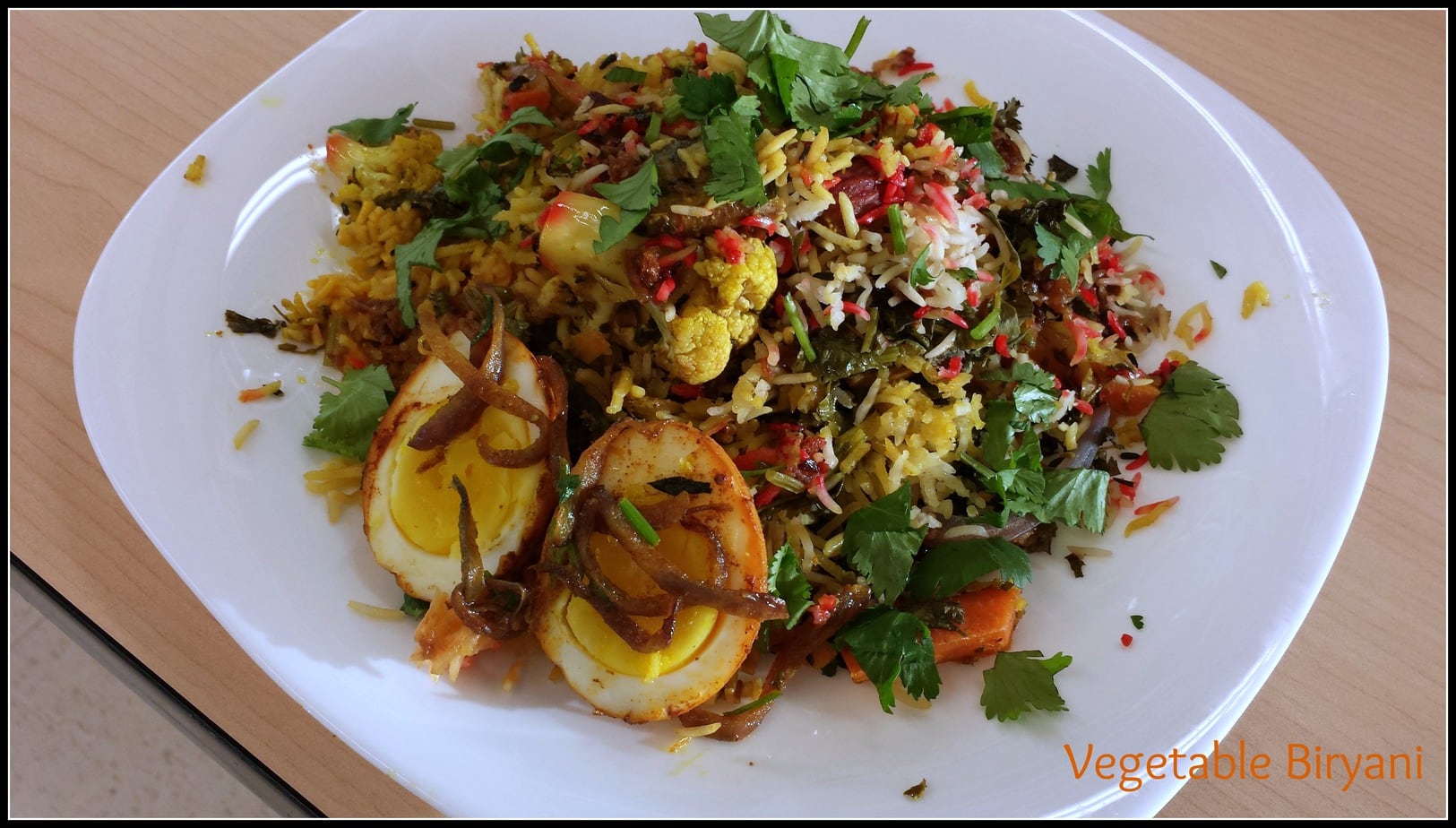 I was really surprised with how much work it is to make a Biryani but when you lift the lid and you see the finished product, it is really worth it!