This blog feels abandoned. The truth is that I’m still cooking but I’m so extremely busy as I’ve been getting our family ready for a busy month. We start out by travelling to Paris, Belgium, The Netherlands, and the areas of Normandy and the Loire. I am so excited I can barely sleep at night thinking about all the things I have to do before we leave and also about what we’re going to do once we are there.  Of course we’ll do all the normal Paris tourist things (which hopefully doesn’t include getting pick pocketed) but then we journey by train through Brussels and on to Brugge. In Brugge we’ll hire a car to drive to Bergen op Zoom to visit the Canadian War Cemetery. My great uncle is buried there and I have a picture of my Grandpa visiting his grave while he was on medical leave. Brothers were generally not allowed to be in the same units as a precaution so my Grandpa was in the Regina Rifles while his brother was in the Black Watch. They fought in different areas and my Grandpa was the one who survived. Those were tough times and I want the kids to know how lucky they are to live in Canada and that their ancestors were an important part of that.

The most important reason for our trip is my oldest son’s graduation. His school, Juno Beach Academy, sends the graduating class to Normandy every year. We’ve been busy volunteering to pay for the trip so that he can tour many important WW1 and WW2 battle sites. Ultimately the class ends with a ceremony on Juno Beach and we really wanted to be there for that. I don’t really know how I’ll feel; okay who am I kidding? I’m already tearing up as I am writing this! The Regina Rifles were part of the third wave on D-Day, coming ashore at Courseulles sur Mer. To be there will be such a powerful feeling, I’d better bring tissues for sure.

The weekend after our trip is my brothers wedding. That means a long drive to Saskatchewan and a quick stay and then a drive back! It’s ten hours so really should be interesting if we are still jet lagged.

Then, if we haven’t seen enough of our family…we’ll see them again the next weekend after that for graduation weekend here in Calgary.

I wasn’t lying when I said this whole month is insanely busy. I will try and post some pictures as I go but I’m not sure how the wifi will be. I’ve heard European wifi moves like a snail…

In the meantime, here is a lovely basket of scones that I made on the weekend. We had them with double smoked thick bacon and it was marvelous!

I originally found the recipe on Reader one Sunday morning from The Insatiable Sisters. I didn’t have any aged Cheddar but I did have some really nice aged Gouda and some fresh Rosemary that needed to be used. Though the flavours were nice I think I’ll stick with my own scone recipe next time but of course use the basic recipe and add the Gouda and Rosemary in. 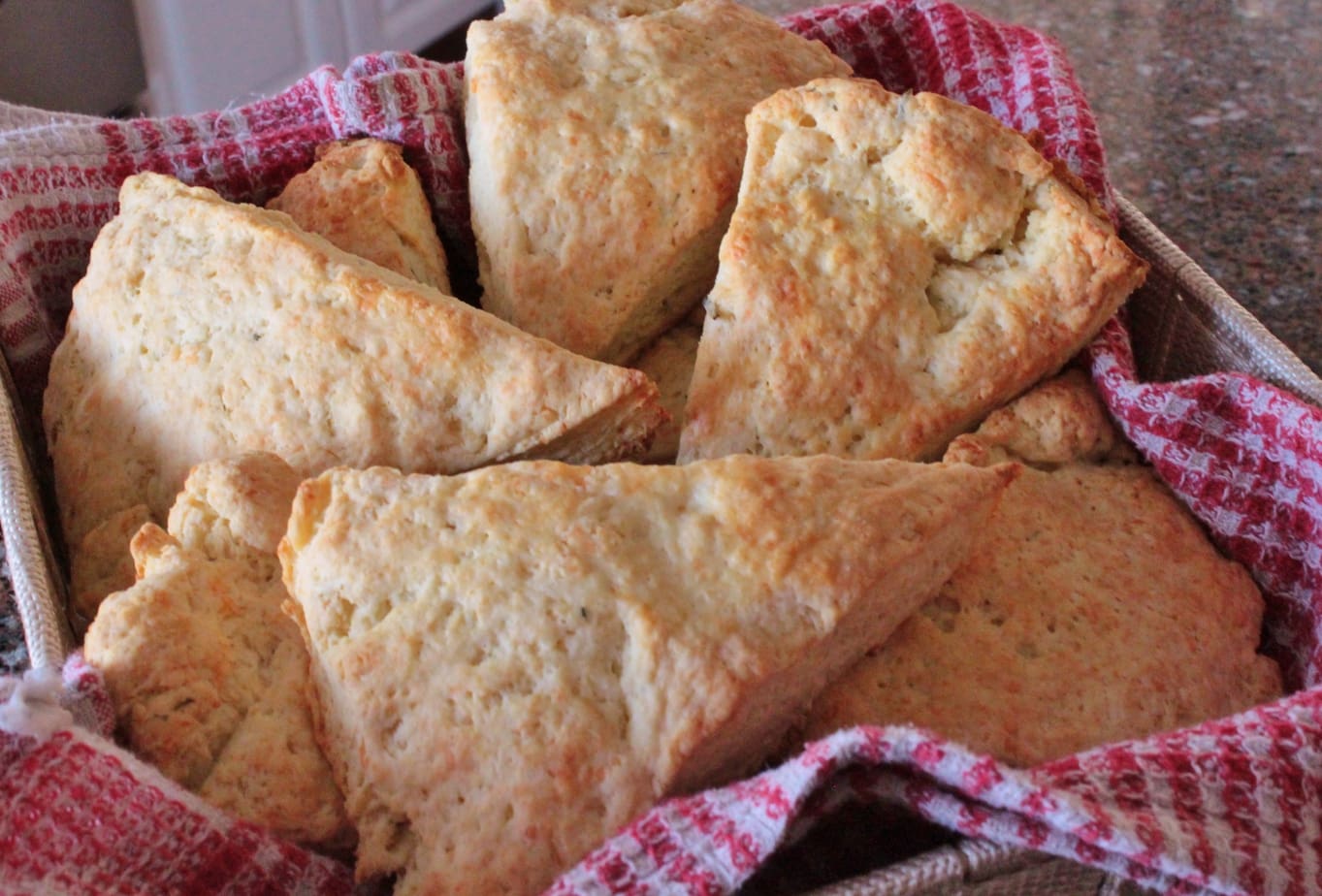