Australian wine holds a special place in my heart and I’m always combing the bottle shop shelves for a new import. I want to be able to support the smaller niche vineyards especially those from Western Australia but the logistics of importing from small vineyards around the world makes those bottles few and far between. Once in a while I get lucky and find bottles from Xanadu, Ringbolt, Vasse Felix and most recently Miles From Nowhere. Margaret River and the Swan Valley are the two wine producing areas of Western Australia, situated in the far south west corner of the State and just slightly West of Perth respectively.

When our ‘Friends of the Vine’ meetup group posted a new event which featured meeting Australian wine producer, Matt Nugan of Nugan Estate, I was ecstatic! Nugan Estate has no vineyard holdings in Western Australia but they do have vineyards in the South at the opposite end of Australia. They have vineyards in three States including Victora, New South Wales, South Australia. During our travels in the Eastern portion of Australia we had been within 170 km of their original vineyard, Manuka Grove in the Riverina. There are several plantings at this vineyard and one we tried was the award winning Manuka Grove Durif.

Our meetup group organizer, Bernard Pearson, arranged to have a four course menu specifically designed to pair with several of the Nugan Estate wines which he imports at PMA. He chose the Carriage House Inn as the venue because he knows how talented the kitchen is there, specifically Lino Savino who is the director at the Carriage House Inn. With a list of the expected wines, Lino and Bernard sat down to create a wonderful multi course dinner.

Our Amuse Bouche was paired with the Nugan Estate Vision Pinot Noir. It consisted of an oyster with a sea bass and pinot noir mignonette. Perched on top was a lovely striking lemongrass foam. I was a bit concerned the lemongrass would be quite overpowering but it was actually quite light and fresh tasting.  An interesting choice for the pinot noir pairing. The woman I was seated next to was quite allergic to shellfish and fish in general. The kitchen was able to accommodate her allergies nicely, sending out a watermelon bite drizzled with a balsamic glaze. 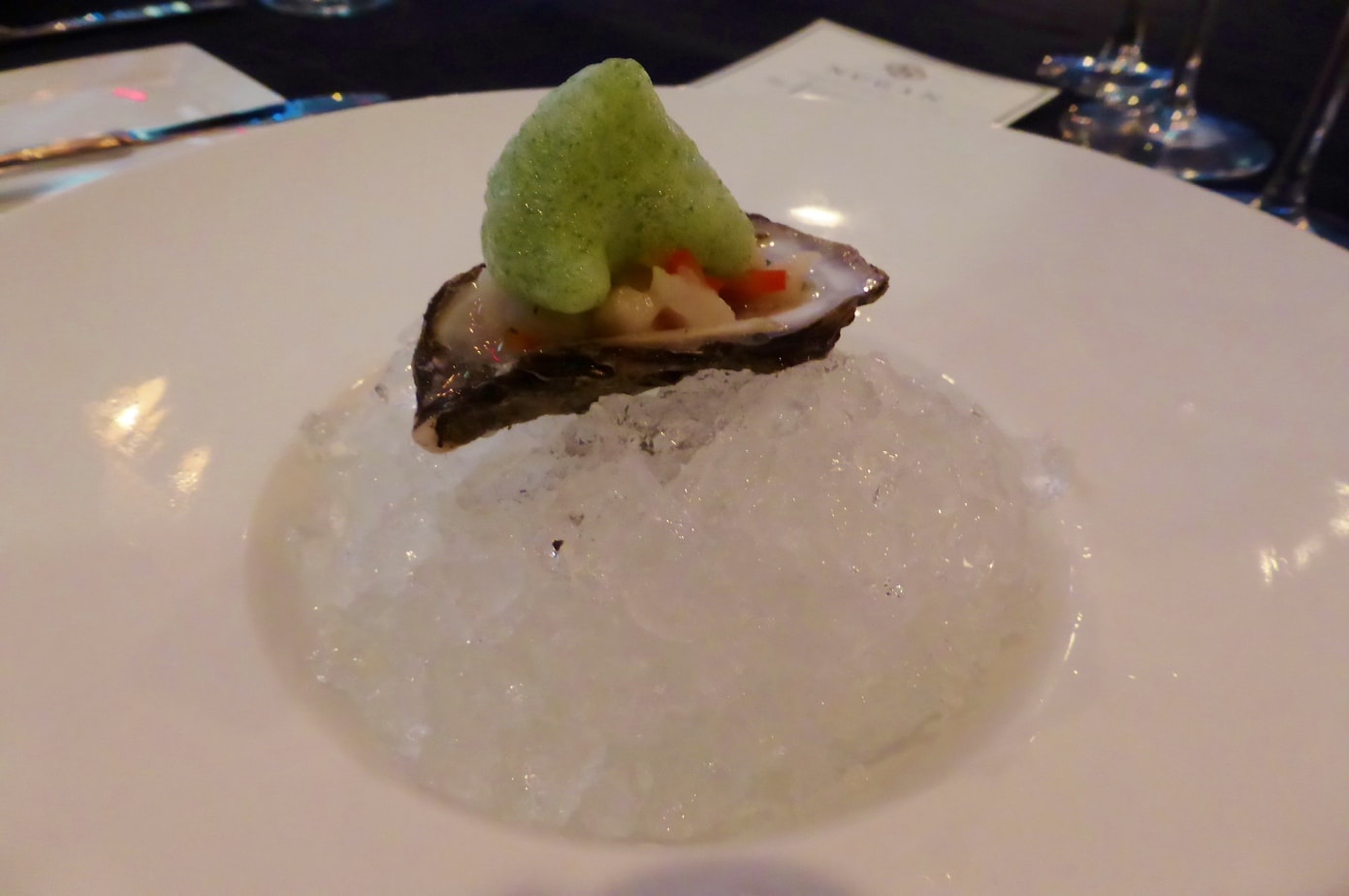 The second offering was to be paired with Nugan Estate Third Generation Chardonnay (2010). Now, I am not a Chardonnay person at all. This Chardonnay was a real treat though, light and fresh and not at all ‘buttery’. I definitely appreciated this style of Chardonnay more than what I had grown used to sipping at various vineyards in Margaret River. The Chardonnay was paired well with Seared Citrus and Star Anise Crusted Ahi Tuna. The portions were extremely generous though I had forgotten all about the crust. I did taste a bit of citrus while enjoying the tuna but there was not enough present to be called a crust. I admit that I really avoided the Wasabi Aioli as I am not a fan of wasabi at all. What I really did like was the micro fennel salad. It had a very mild fennel taste and gave the dish a nice textural element.  Now that I am experimenting more at home with sprouting, I am wondering if the micro fennel is something I should try to grow. Again, the kitchen did their best to accommodate allergies. Instead, they brought my friend a really nice piece of beef tenderloin with a similar presentation.

Next up we had an interesting pairing. The Nugan Estate McLaren Parish Vineyard Shiraz (2008) with a Braised Swiss Chard Tart, Goat Cheese, Black Olive and Sundried Tomato Emulsion.   The pastry on the tart was really nice and flaky and the Swiss Chard/Goat Cheese combo was an effective pairing with the Shiraz. Black olives and I are not the best of friends, but I did enjoy the Sundried Tomato Emulsion though I thought it was more of a paste. Apologies for the poor photo, it was quite dark within the dining room. I tried my best. 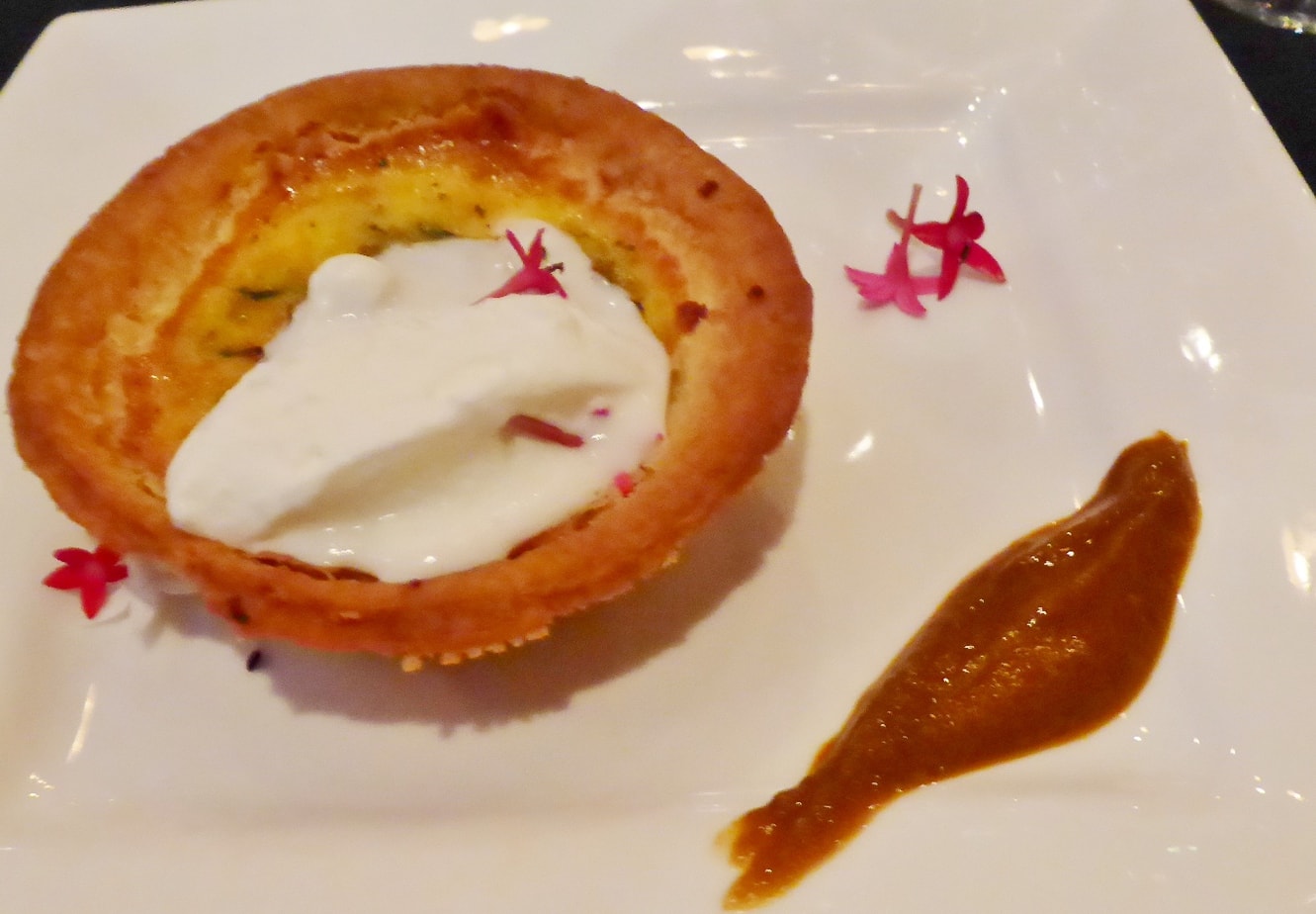 Before each course was to be served, Matt said a few about each of the accompanying wines.  I could tell that he was most proud of the Nugan Estate Manuka Grove Durif (2008). The Durif grapes are grown solely on the family’s vineyard at Hanwood in the Riverina, where the family home is located. Manuka Grove was first a Citrus orchard planted by Matt’s father, Ken but was later replanted with grapes in 1998. I would say it’s a very young vineyard because I’m not one to think that 1998 was that long ago….The Durif had a very soft mouthfeel to me, a great accompaniment to the stuffed pork chop, however, I couldn’t stop thinking about how nice it would be with lamb chops or a roast leg of lamb. My pork chop was a touch overdone but I really do think pork is a difficult meat to cook for a varied group. If there is even a bit of pink many people are concerned about underdone pork but if you wait too long after the juices are clear it becomes dry very easily. It still tasted lovely and I really enjoyed the fig demi glace. 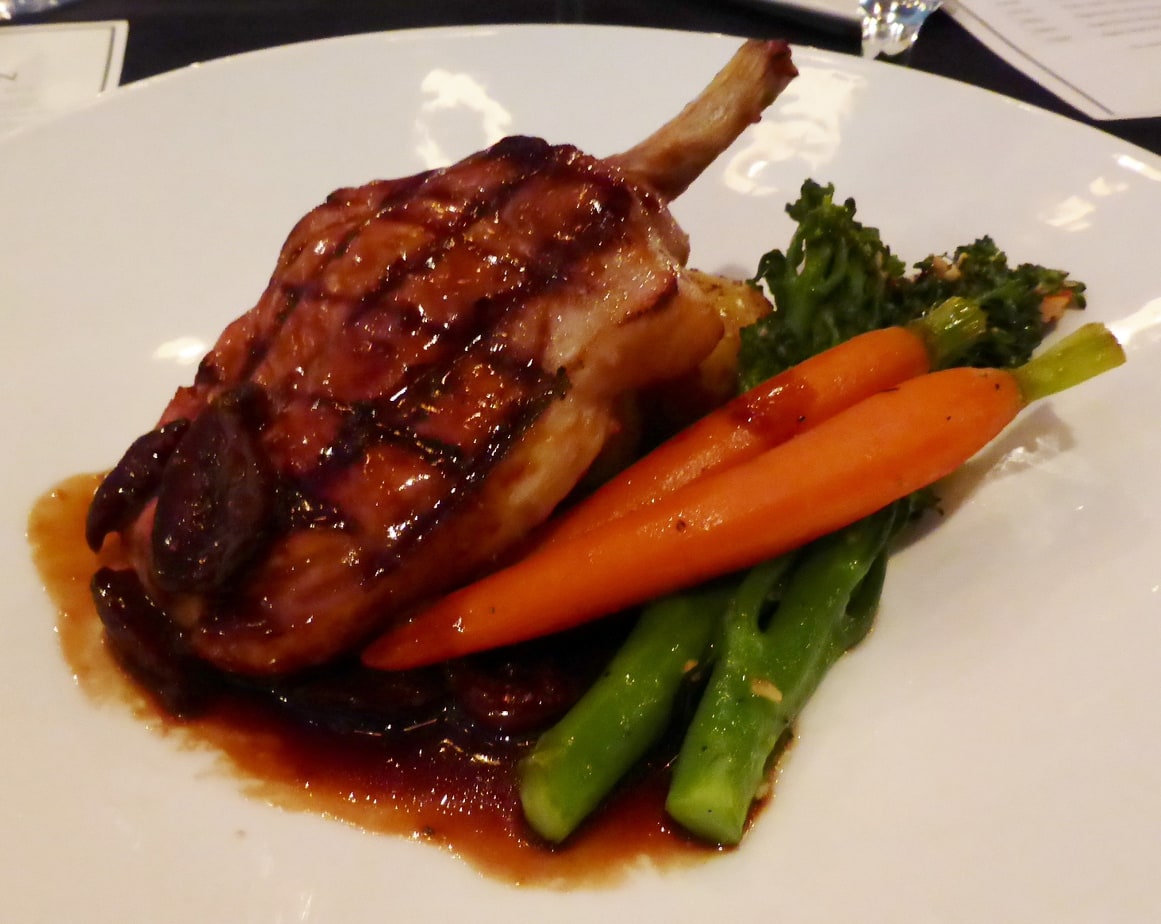 The last course was dessert. It consisted of a nice little Meyer Lemon Panna Cotta with a ball of Cherry Sorbet. It was paired with the Nugan Estate Sauvignon Blanc (2009) because of the slight citrus-y overtones. I got really excited here because what I tasted was a typical Aussie Sav.  Blanc that is really reflective of the volcanic/iron rich soils the grapes are grown on. It was very much similar to some of the Margaret River Sauvignon Blancs that I had tasted previously.  The Panna Cotta was a brilliant success and the Cherry Sorbet was tasty. I think everyone got a little excited when they saw the sugar work spiral. 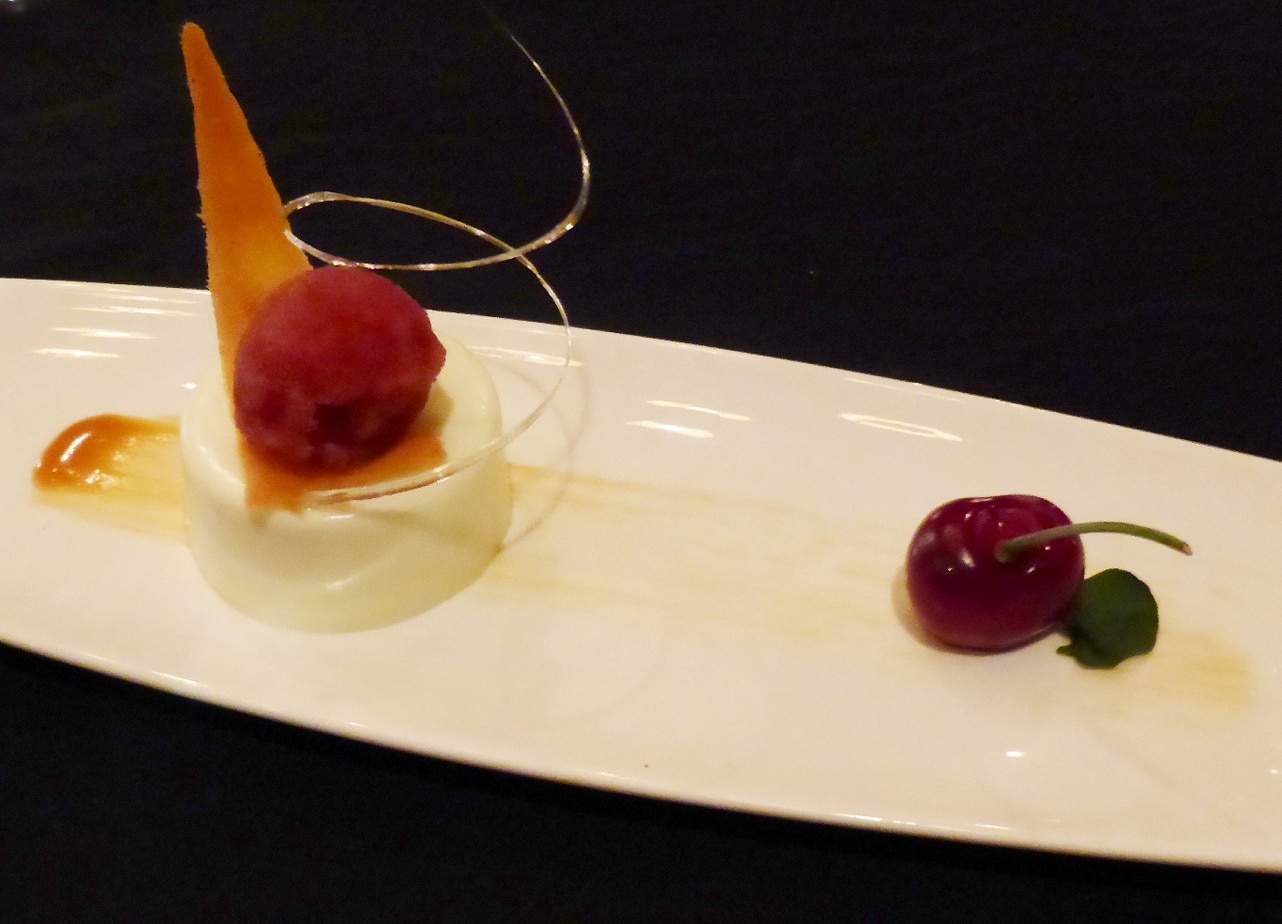 It was a pleasurable and very informative evening out. I learned a lot about Nugan Estate wines and met some very interesting people, some of whom do this sort of thing weekly. I’m sure for them it was all part of their jobs but the hubby and I really did appreciate how special the evening was. It was something we won’t forget anytime soon.