Around the World in Twelve Plates – Egyptian Basbousa

I say it’s high time I bake something sweet for the Around the World in Twelve Plates blogger collaboration. Basbousa is an Egyptian classic cake made from durum semolina and a whole lot of dairy which is also popular in many other Middle Eastern countries.  The cake is quite rich with a unique texture but it’s the syrup that provides all the flavour! 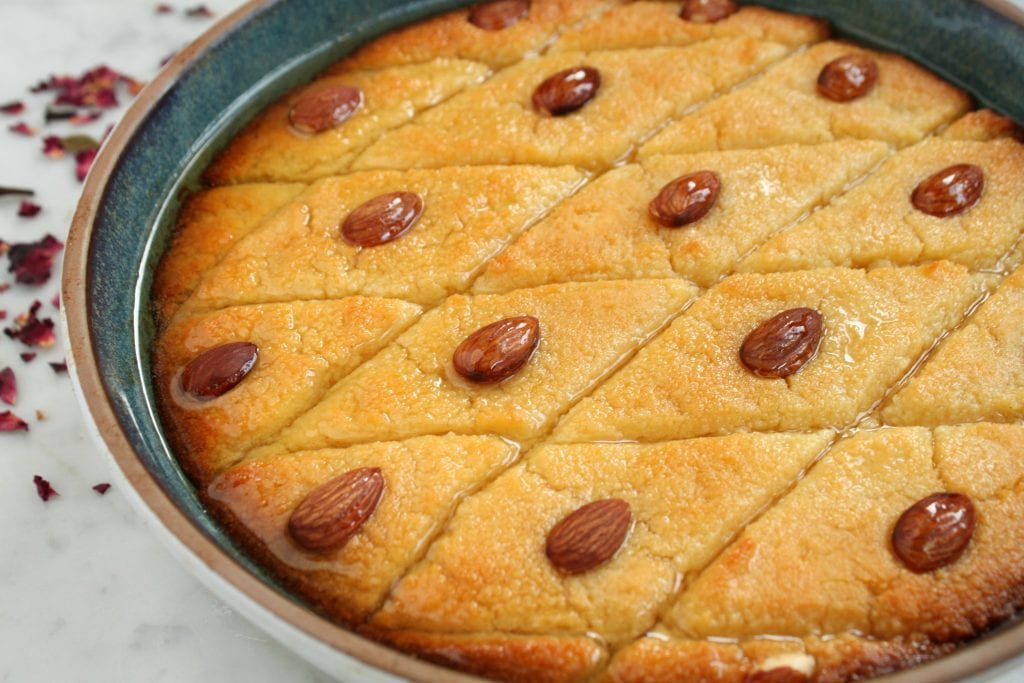 Our Trip to Egypt

What is unique about this month’s ATW12P country is that I have actually been to Egypt. Shaun had a work trip to Egypt scheduled in January 2008 and I knew I couldn’t pass up the opportunity to tag along. The company he was working for scheduled private tours for me in Alexandria and I was under the close supervision of several female tour guides. Alexandria is much smaller than Cairo. When I say ‘much smaller’ I am talking in terms of millions of people. Alexandria’s 2008 population wasa just over 4 million while Cairo at that time was around 18 million.

Though Alexandria is a popular resort destination for Egyptians, I visited during the ‘off season’ when temperatures were quite a bit cooler (18-20° C). Traffic wasn’t a horrendous nightmare (though really it was pretty much a nightmare anyway compared to where I live!). I was glad we had our own driver even though we found out later he was legally blind. The drive from Cairo to Alexandria is around 3 hours on one of the world’s deadliest highways. We made it there and back safely so I guess he wasn’t so bad after all.

So Many Beautiful Sights to Capture

I really regret that this trip happened before I started my blog. Looking back at the photos, my skills probably matched the equivalent quality of my camera gear. We stayed in what was the most gorgeous hotel surrounded by the Montaza Palace grounds right on the Mediterranean. Unfortunately my photos are all quite grey, lackluster, and blurry.

I visited  the modern Alexandria Library which is a much more modern version of the famous antiquities library that was burned down by Julius Caesar. Also on the tour were the  Citadel of Qaitbay (a 15th-century defensive fortress established in 1477 AD by Sultan Al-Ashraf Sayf al-Din Qa’it Bay), the catacombs of Kom El Shoqafa (a necropolis which consists of a series of Alexandrian tombs, statues and archaeological objects of the Pharaonic funeral cult mixed with Greek and early Imperial Roman influences) as well as the Graeco-Roman Museum, the Alexandria National Museum, and the ruins of a Roman Auditorium and Bathhouse. 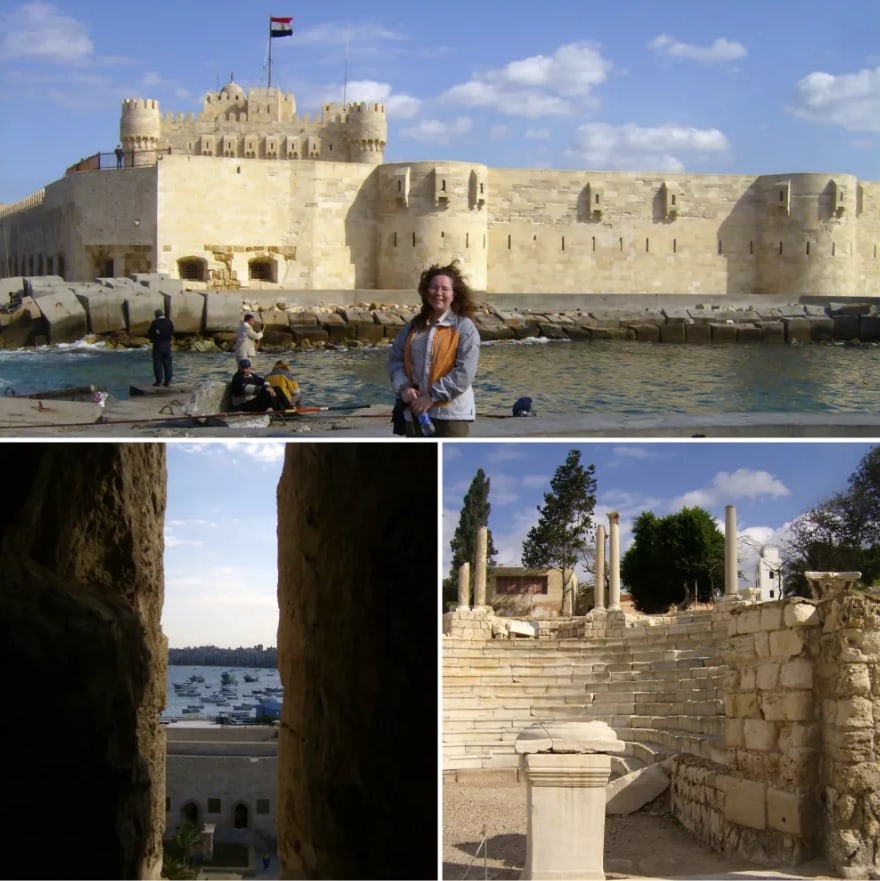 The Citadel of Qaitbay and a Roman Auditorium

But the REAL highlights of this trip were:

After my husband was finished work in Alexandria we had a day to tour around Cairo. Our day began (as one inevitably does) in Giza to explore the Pyramids and gaze at the Sphinx. We had a chance to enter the Pyramid but I just couldn’t do it. I felt there was an electricity in the air; a strange imbalance or feeling of unrest or sadness. I felt it was just wrong to go in. We did climb up to get our photo taken. Those blocks are a lot larger than I thought they would be!

As far as food went, we had some amazing dinners. The ones that are most memorable to me were the ones that began with crates of fresh fishes on ice. We chose our fish and how it was to be cooked (fried, grilled, etc.) then we were seated. While we waited for our fish, we were fed small but delicious dishes to encourage our appetite. We didn’t ever have room for dessert but always finished with a fresh orange or a mango smoothie. Egypt was where I fell in love with mangoes. Until our trip I had only ever experienced mangoes (which I call Canadian mangoes) that are imported halfway around the world. If I would have had room for dessert I would have chosen a slice of Basbousa with extra syrup. 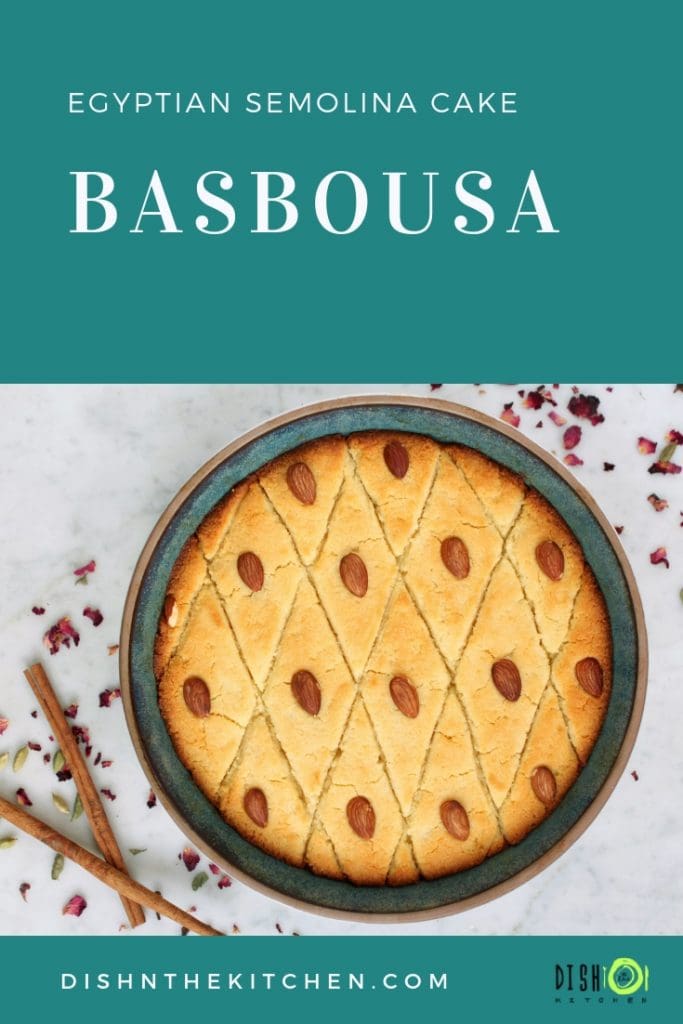 Are you as excited as I am to see what other ATW12P bloggers are up to for the Egyptian challenge? Please give them a visit and show them some love and appreciation!

Gabby Peyton at The Food Girl in Town 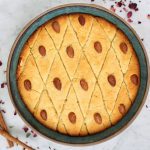 Around the World in Twelve Plates Egyptian Basbousa

by: Bernice Hill (adapted from The Mediterranean Dish)

0.0 rating
A sweet and satisfying cake with incredible texture.

* I spent two hours looking for coarse durum semolina flour. My 'go-to' place was out and I eventually figured out that couscous would do the trick as it is, essentially durum semolina mixed with water to make larger particles. I threw two cups of couscous in my blender and gave it a whirl for a minute. I ended up with the perfect mix of fine and coarse semolina!