I was so extremely grateful that my friends at the Cook the Book Fridays group chose a relatively quick recipe for this week’s CtBF. Still, I knew that getting away with assembling a quick tapenade seemed a bit too easy. Having learned my lesson from the last recipe which involved an all day process of baking a quick bread and a slow braising the stew, I made sure to review the tapenade recipe ahead of time. Aha! My suspicions were confirmed…David’s recipe required the extra step of heating the olive oil with rosemary. The process of heating and cooling oil would definitely add a chunk of extra time to this seemingly quick tapenade. Was it worth it? Probably. Did I already have herbed olive oil in my pantry? Yes! I went with that. Sometime in the future when the herbed oil runs out I will make my own because it’s a fairly easy process and I always have fresh rosemary on hand.


I’m going to be pretty honest here. I’ve never liked olives. So why…you might ask…would I vote for a tapenade recipe? I absolutely LOVE artichokes and my love for artichokes is so strong that I could handle a few pesky olives. David’s recipe doesn’t specify what kind of olives to use, he only mentions green and pitted. So I made a special trip to the nearby Italian Centre so that I could pick out olives that were slightly more tolerable to me. I had always thought olives were a ‘love them or hate them’ kind of snack, but recently (and because of the Italian Centre) I have discovered two kinds that I can tolerate. One is the really dry wrinkly black olive and the other is a bright green, globular one called a Nocellara olive. The Italian Centre was really a one stop shopping for this dish because they also carry capers and quite a few varieties of canned artichokes. I was pretty excited when they opened their store last year because they carry almost any culinary item and ingredient imaginable and they are only a 10 minute drive from my house.

After picking up the ingredients, I hurried back home to make the tapenade and hand shaped orecchiette. The dough I had set out to rest while getting the olives had to be rolled out and shaped before we had to leave for football. Time was running short! Even so, I took some liberties with the tapenade recipe, as I most often do. These specific liberties actually added on more prep time because they involved hand chopping every ingredient rather than chucking it all in the food processor. There are some things that just should not be made in the processor and tapenade is one of them (salsa is another). I’m kind of old school that way, plus I like my tapenade super chunky. Of course David mentions throwing the ingredients into a mortar but there was definitely no time for that. By the way, I tried to get the olive pits out by hand but that wasn’t working so I got out the cherry pitter. It actually worked really well on the Nocarella olives.

My attempt at making orecchiette was pretty lame so you won’t ever see a photo of it but I have plenty of photos of that amazing Artichoke Tapenade with Rosemary Oil. We ate it on the gorgeous rustic potato bread (also from the Italian Centre…they have an amazing bakery!) and warmed up with some leftover chicken on the nightmarish orecchiette for a quick dinner. It was delicious!

Then we spent the next two hours watching our son’s football team win their first game of the season.

Generally our group respects David’s ownership of each recipe that we cook from My Paris Kitchen by not posting the recipes from the book. There are a few renditions of the tapenade floating around on the internet, including one on David’s site. 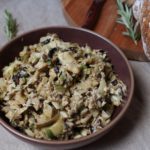 0.0 rating
You can eat this tapenade in all the usual ways or mix it in with some pasta and chicken for a delicious main meal.

To use as a 'pesto' on pasta, warm slightly and mix with boiled and drained pasta. Add warmed chicken if you wish.