Restaurant trends come and go but a couple of current trends that I am really ecstatic about are the gastro pubs and craft micro breweries that are popping up here in Calgary.  Places like National (two locations; one on 17th, the other on 10th), Beer Revolution (Beltline), Wurst (now closed for post flood renovations), and Craft Beer Market on 10th serve some mighty fine and enlightened pub food to go with their extensive world and local beer selections.   Brew pubs that craft their own local beers such as Brewsters, Big Rock,  Wild Rose and Village Brewery are also busy with hungry beer drinkers, cowboys, and hipsters who want to remain hydrated and support local businesses.

It’s no secret that I love beer. I’ve recently started another blog (because I don’t have anything else to do) based solely on my beer experiences. Hops ‘n’ Bubbles makes no promises about pretty pictures or legible write ups. I started it as a convenience to myself, a gift so that I may remember (or in some cases partially remember) my beer experiences. Sometimes, as in this case, I will add the same food/beer related post to both blogs.

On our recent trip to Europe, hubby and I had a brilliant opportunity to immerse ourselves in the Belgian beer culture but I’m afraid we failed miserably. Trying eight out of the hundreds of options available is simply not much of an effort.  When I heard that Craft Beer Market was holding a Belgian Brewmasters Dinner featuring an assortment of Belgian brews paired with delicious food, I just couldn’t pass up the opportunity. The added lure of winning a trip for two to Belgium was also a factor in my eagerness to buy tickets.   We’ll just say hubby didn’t have to be forced to go either.  I had been wanting to visit Craft Beer Market for a long time and when hubby told me he went there for lunch with a client last month I really flipped out! He did manage to calm me down when he mentioned they have Delerium Tremens on tap.

We arrived at Craft Beer Market quite early and were seated at a family style table for eight next to a young couple. The tables were set with the menus for the evening, cutlery, beer coasters, and a keepsake Stellas Artois glass that we were to bring home.

The set menu created by Chef Eric Mah (new executive chef at Craft Beer Market Calgary) was designed specifically to either pair with or be complimented by the recommended Belgian beer. With one exception. Our table companions and I wondered why the first beer we were to try happened to be from Germany. It was an odd start to a Belgian beer themed evening.  The Hasseröder Pilsner style beer was light in body, colour, carbonation, and taste except for that bitter little kick it had. It was paired really well with our first nibble,  the Bone Marrow Cigarillo, as it cut the very rich ‘spring roll’ filled with marrow and herbs. Despite having some reservations about trying bone marrow for the first time I was pleasantly surprised. I found the seasoning (and oddly enough the texture as well) to be very similar to what you would find in traditional turkey dressing…perhaps a bit of sage? 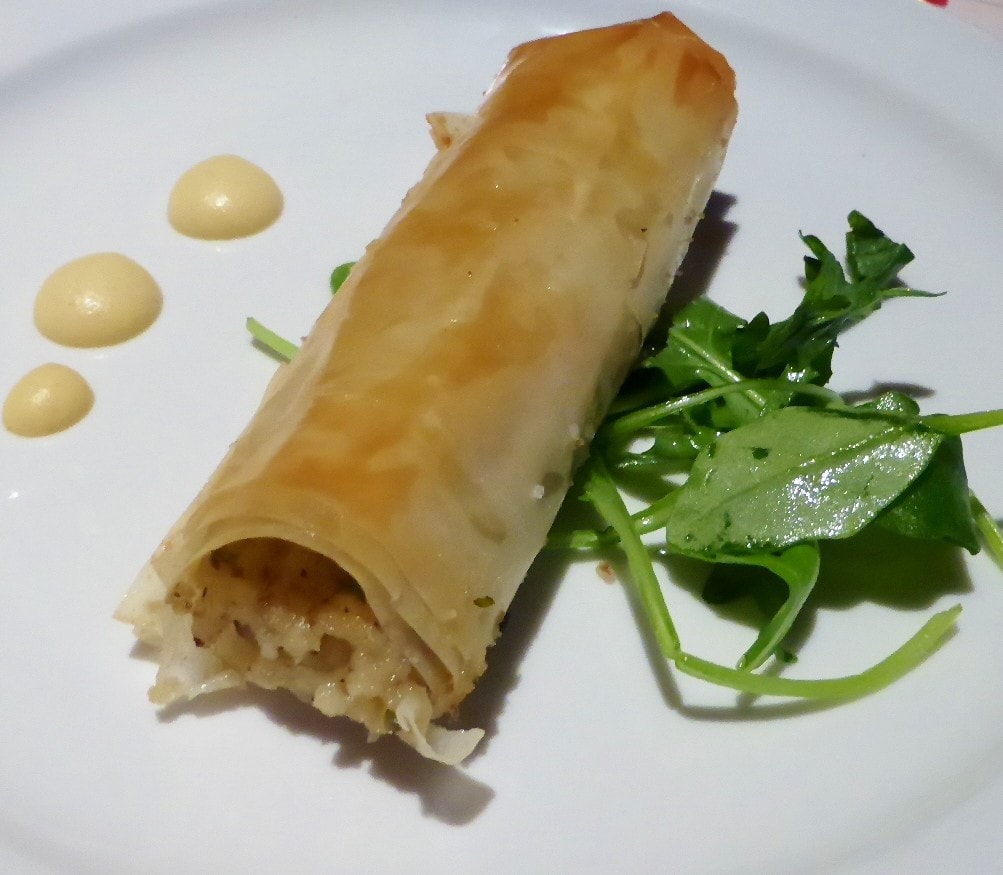 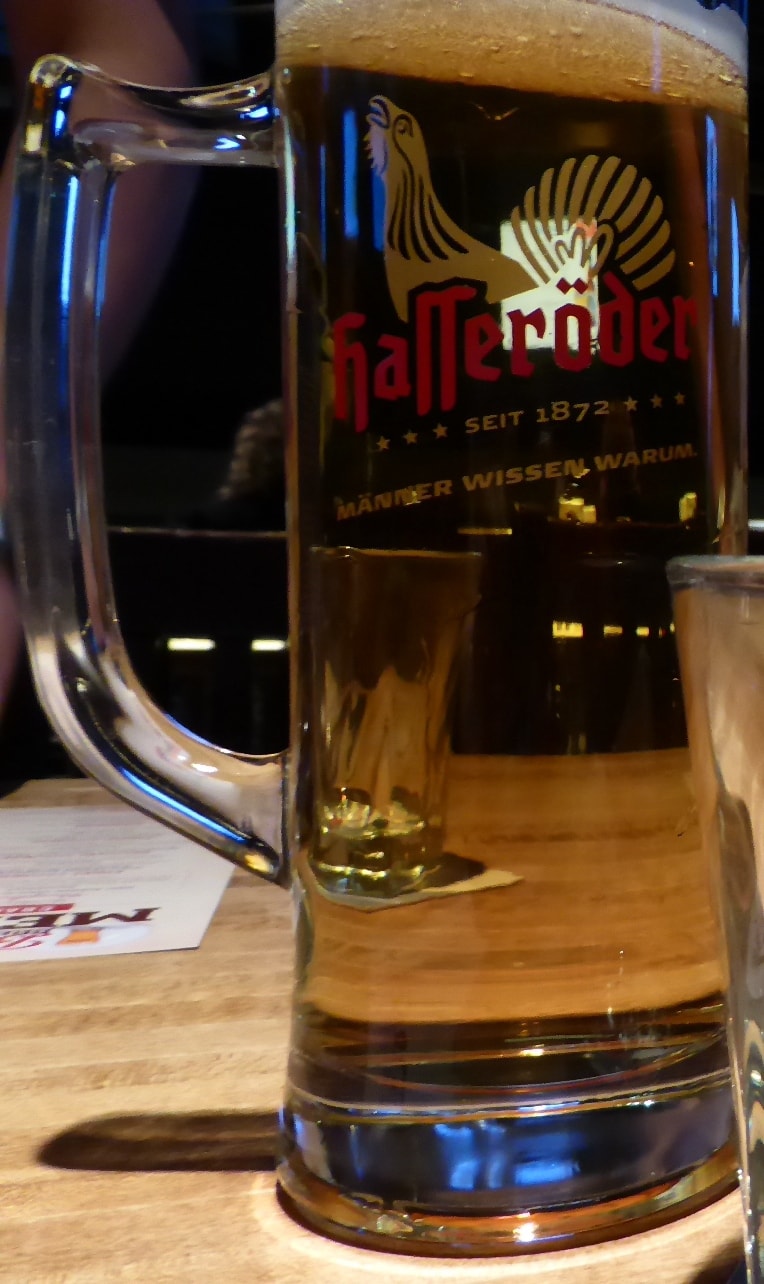 With each course and pairing we relaxed a bit and got to know our fellow dinner companions Vanessa and Scott. Scott had also been to Belgium and was most looking forward to the deconstructed waterzooi course and the Leffe Blonde beer.

I regret to say that we all were a bit let down by the next course, a honey roasted belgian endive with wild boar bacon salad served with Hoegaarden. We all agreed that what the salad needed was a lot more endive and much less ‘greenery’…and I secretly wished for larger chunks of bacon and some fried potatoes. I am currently on a really big ‘unfiltered’ beer kick which started with a bottle of La Trappe I had in Belgium. I love the yeasty, toothiness that an unfiltered beer has. Yeah. I guess in a way it went really well with the grilled endive which also has a very toothy feel. As well, there were hints of citrus in both the salad and the Hogaarden. 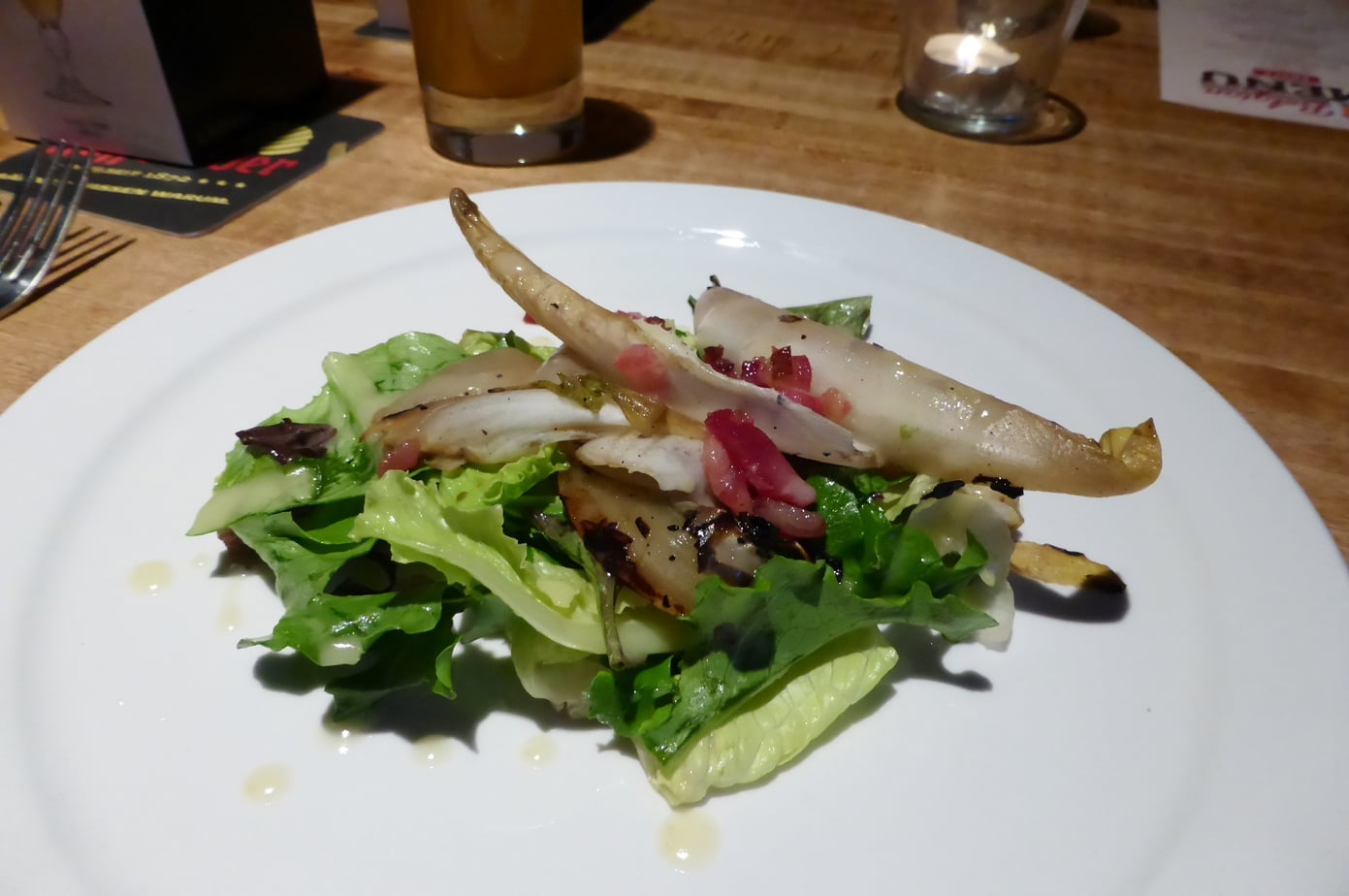 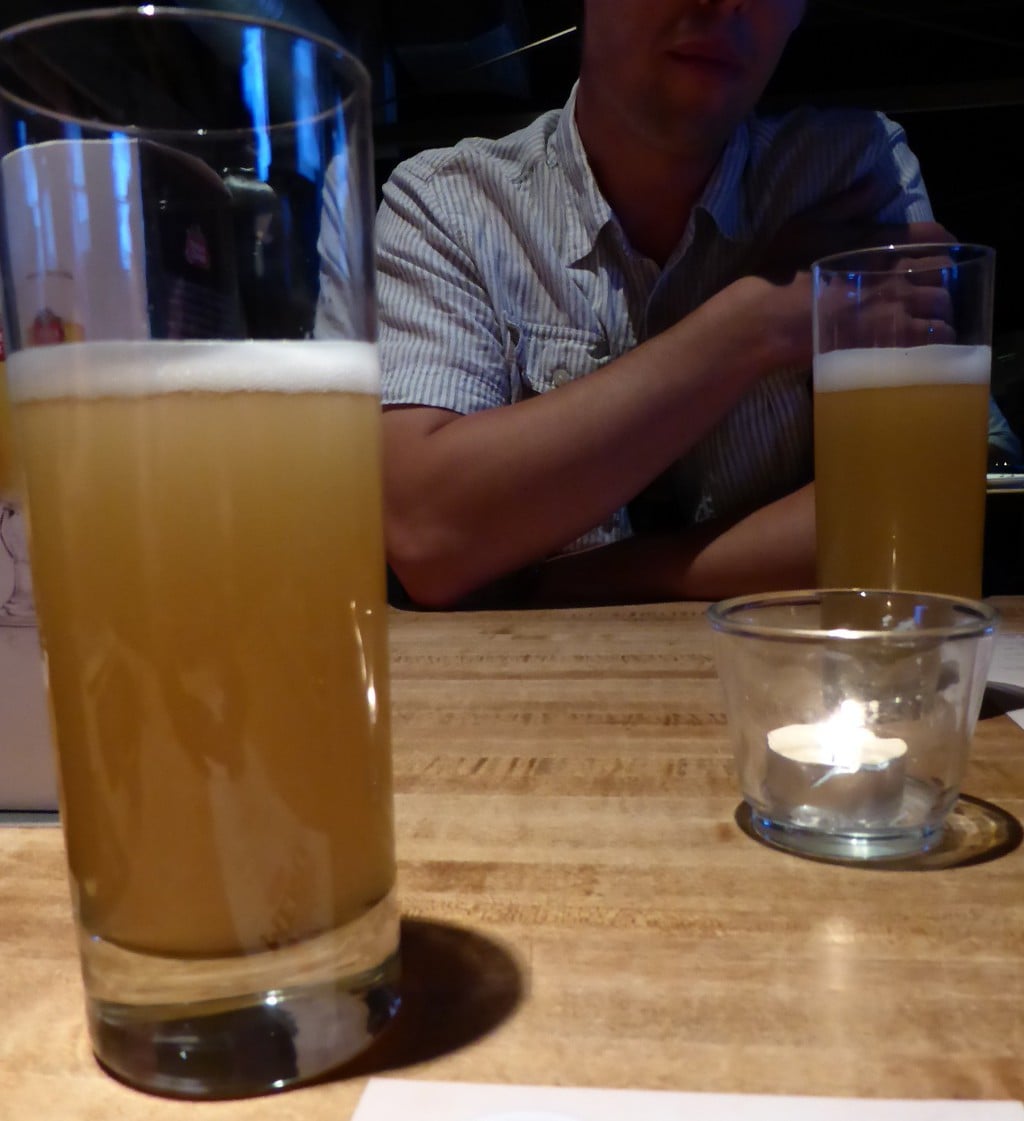 Our new friend Scott was very happy with the next course. The ‘Deconstructed Traditional Waterzooi’ posed a bit of a problem for us though it did give us something to discuss. Waterzooi is a very traditional Belgian stew, usually made with shellfish and fish.  The seafood broth is thickened with potatoes (as opposed to cream) and has an herby flavour with a very peppery after bite. Our deconstructed Waterzooi had all those components within a very scaled down sauce, fat PEI mussel,  tiny lobster tail and nice mixture of julienne vegetables. Normally I’m not a big mussel fan but I loved it served this way! I did find that my poor little lobster tail was quite over cooked, dry and chewy. A minor fault in an other wise amazing dish…but I still have serious qualms about describing a dish as both deconstructed AND traditional.

The beer paired with the Waterzooi was Stella Artois. It must not have been an outstanding pairing because nothing really stood out to me. The beer didn’t detract from the dish, nor did it elevate it. 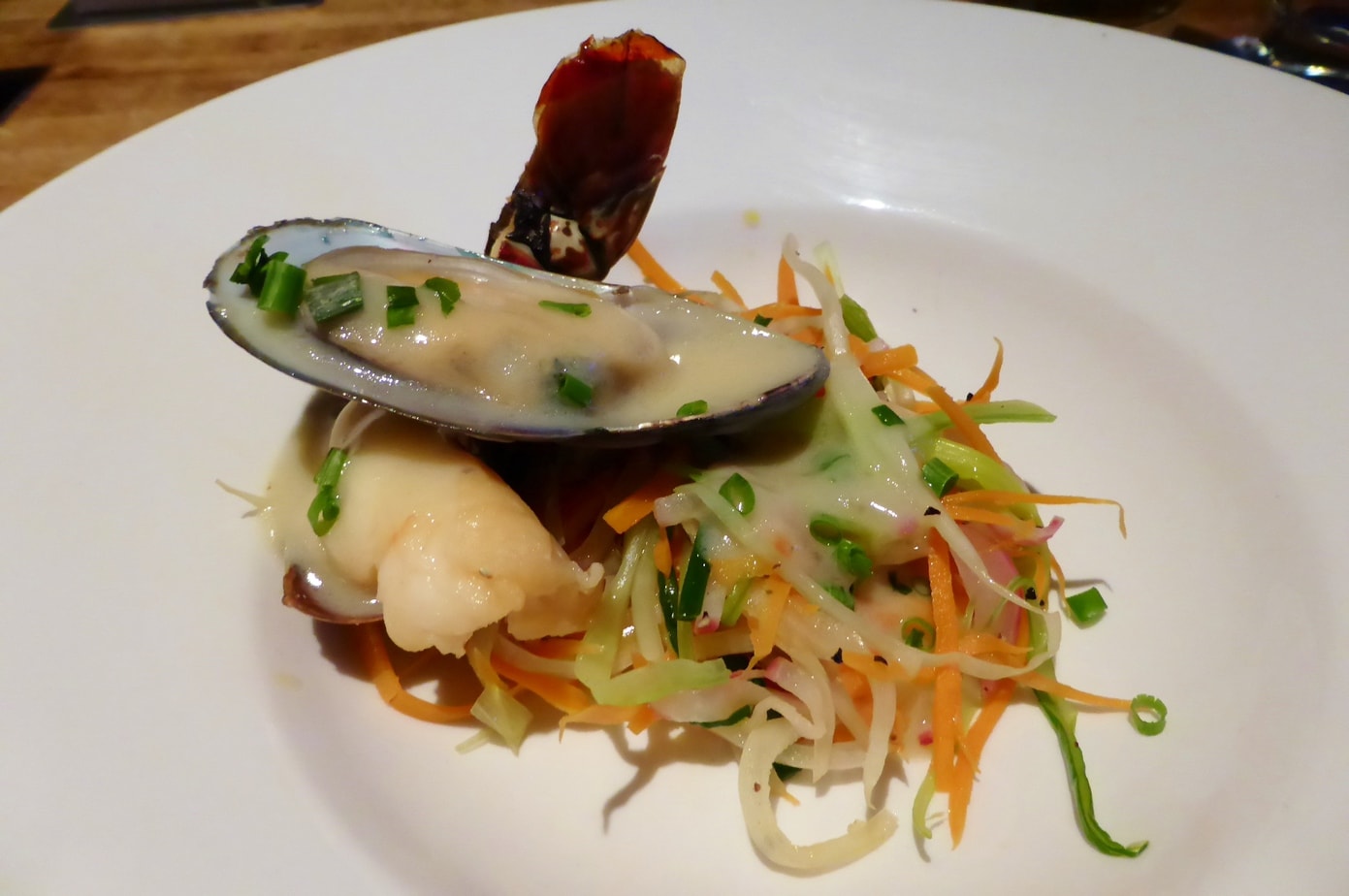 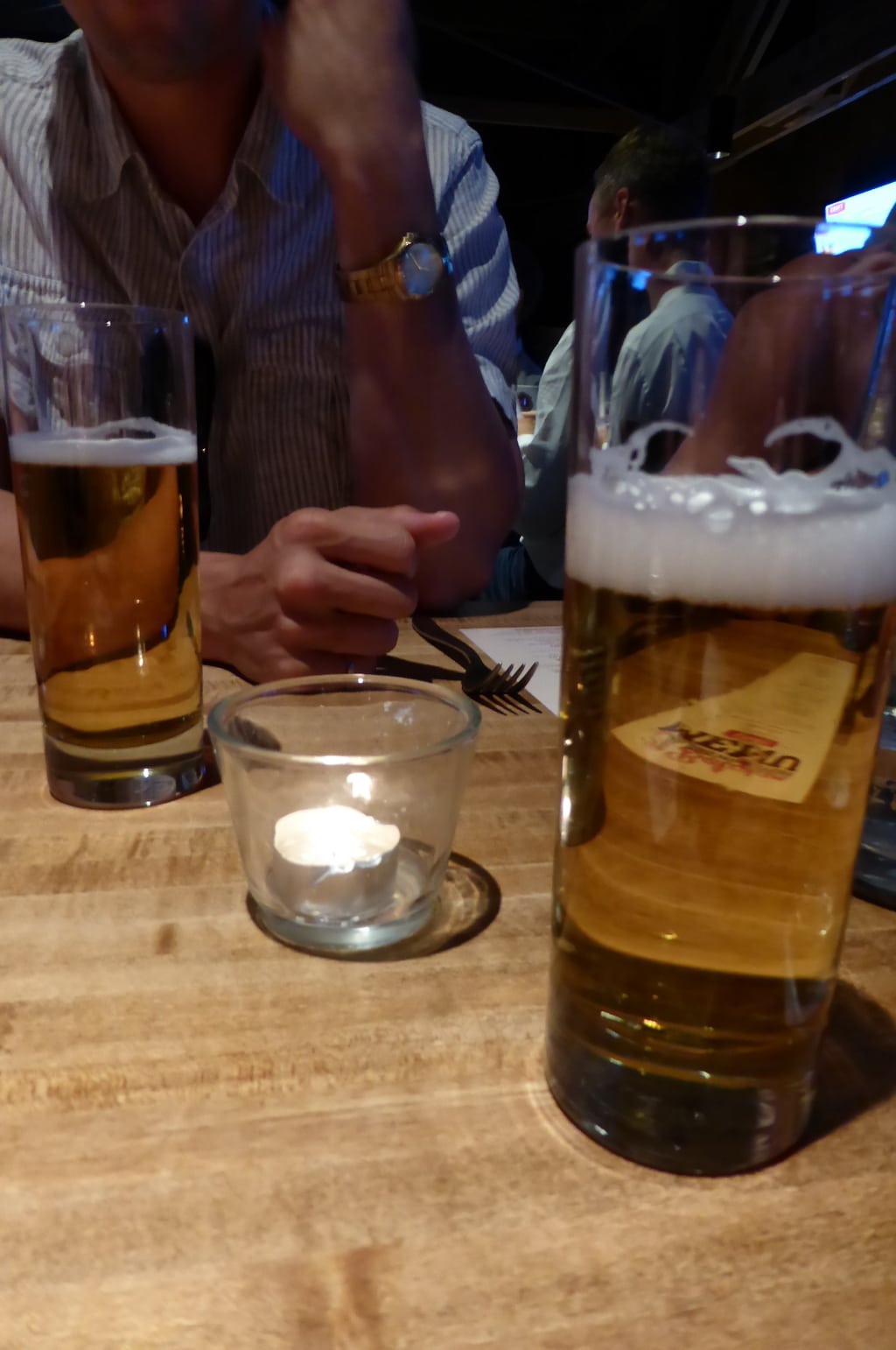 The third course was probably the favourite of the night and not just at our table. I heard several people talking about the slow braised leg of rabbit paired with Leffe Blonde beer. The rabbit was braised in the beer and mustard for ten hours and it just melted off the bone. I could probably eat this comfort food every day of the year and not get tired of it..yeah it was that good. And I sopped up all that lovely sauce with the accompanying savoury Belgian style waffles. Just perfect Chef Eric!! 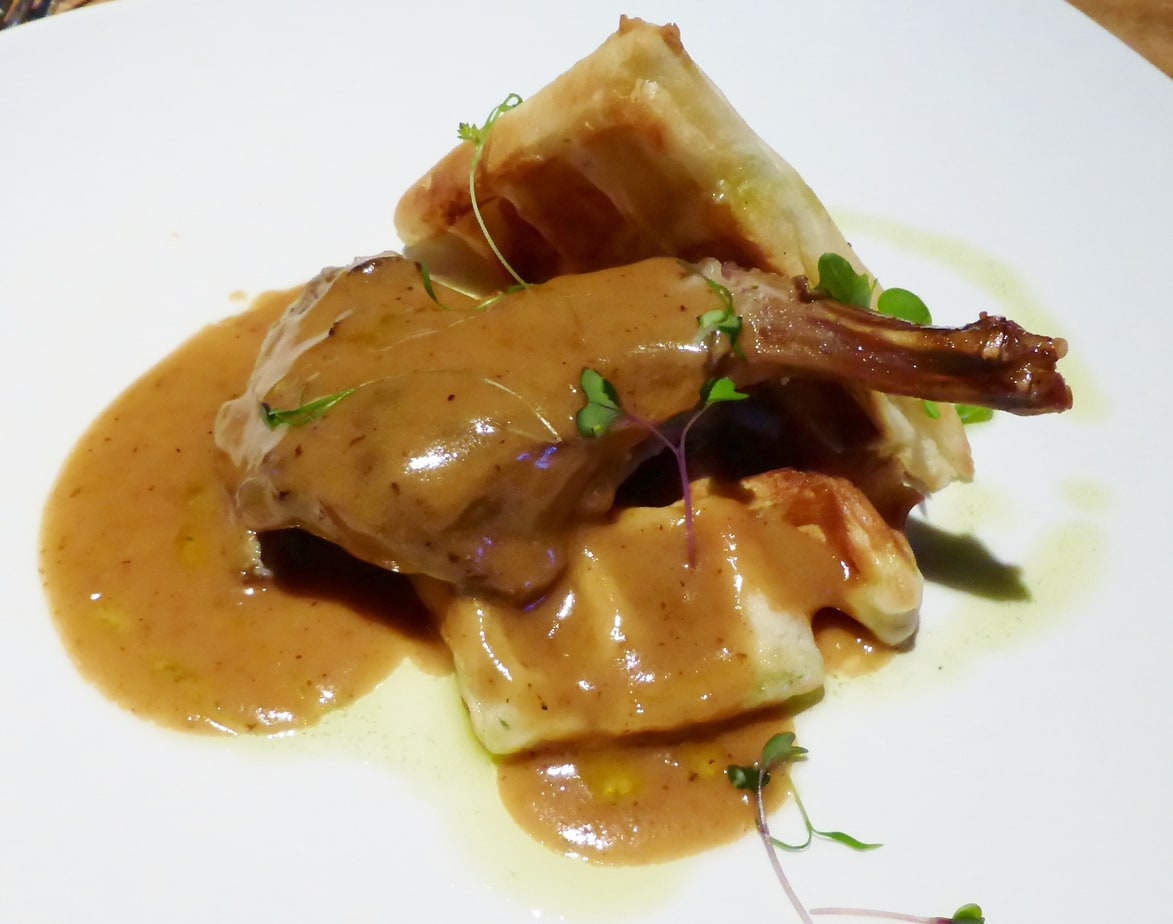 The Leffe Blonde was the only ‘Abbey style’ beer on the menu for the night.  The beer has a complicated past. Originally it was brewed with unique ingredients found near the Abbey de Notre Dame in the southern Belgian province of Namur.  The Abbey went through a wide range of set backs such as flooding, fire, war and was destroyed finally during the 1794 French revolution. The original Leffe recipe resumed production in 1952 by a small Flemish brewery which later was bought out by Interbrew. Leffe is now made in Leuven at the Stella Artois brewery.

Complicated history or not this beer was the star of the Belgian Brewmasters Dinner.  The beer is light and fruity with a bit of spice. I thought I tasted a bit of cardamom. It was nice with the slight gamey taste of the rabbit. My husband says he doesn’t like the term ‘gamey’ as it has negative connotations to him.  I grew up eating a fair amount of game and I like the taste. As I said the rabbit was slightly gamey in that it was mostly like very dark free range chicken meat. Not gamey as in roasted moose. 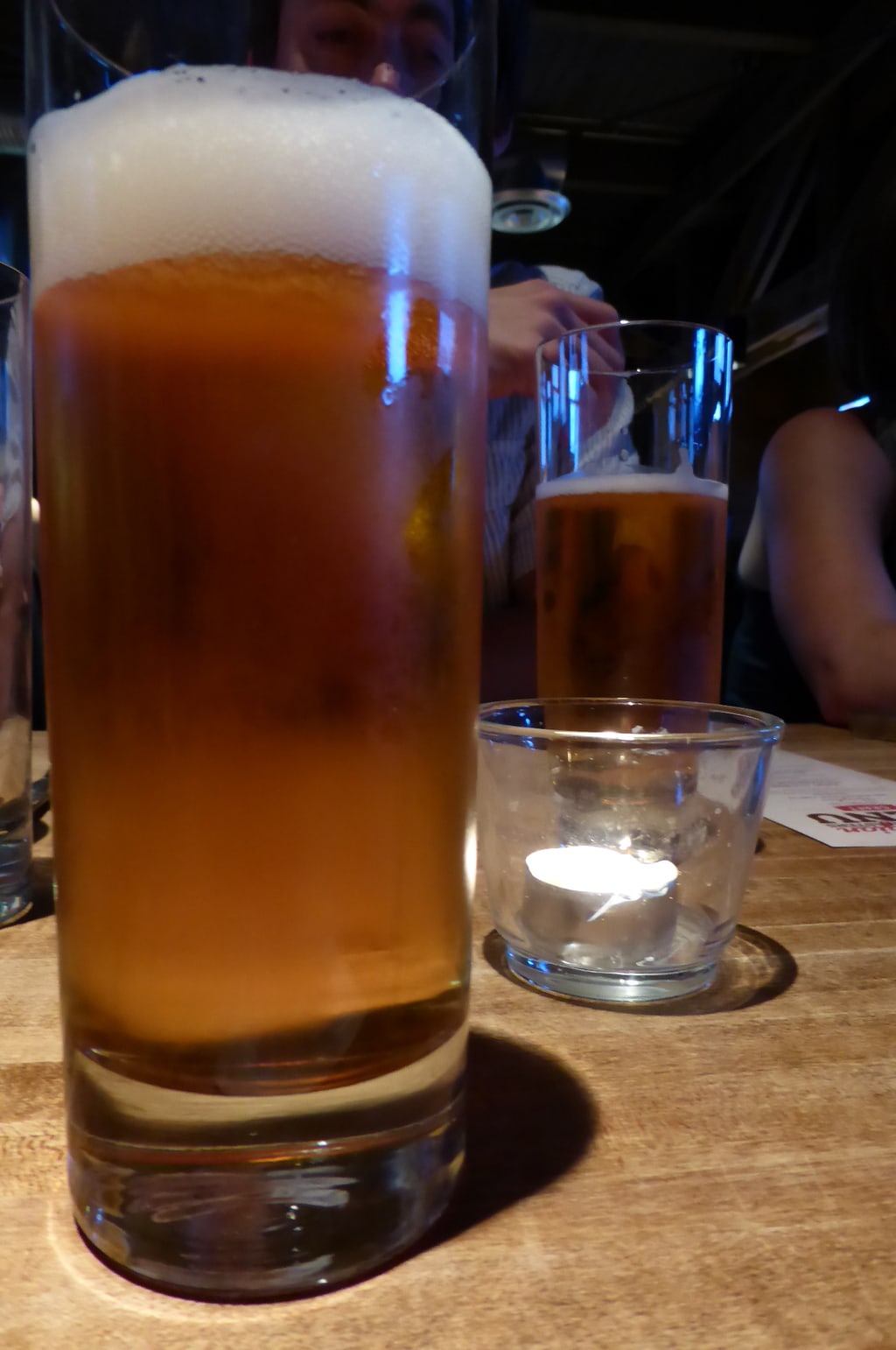 Our fourth and last course was more than a passing nod to another delicious Belgian product, chocolate.  The Belgian chocolate New York style cheesecake was so rich I just couldn’t finish it (when I told this to kid number two she cried out in horror!) and I had to leave it behind on the plate.  I felt sad because it really was quite delicious but pairing chocolate with any fruit is just something I am not too keen on. The raspberry reduction and sabayon containing the Hoegaarden rosée were outstanding…just not something I like with my chocolate. 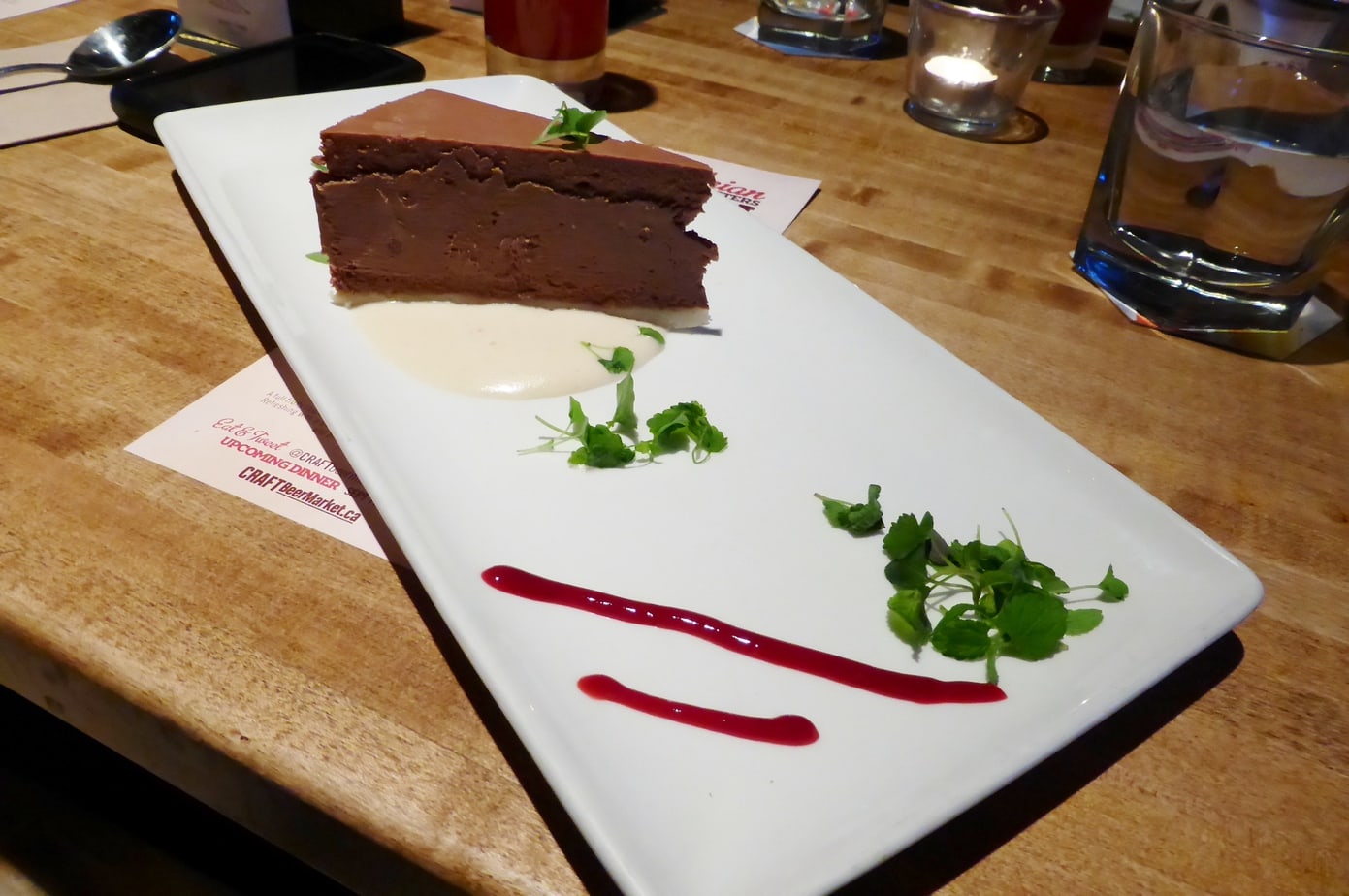 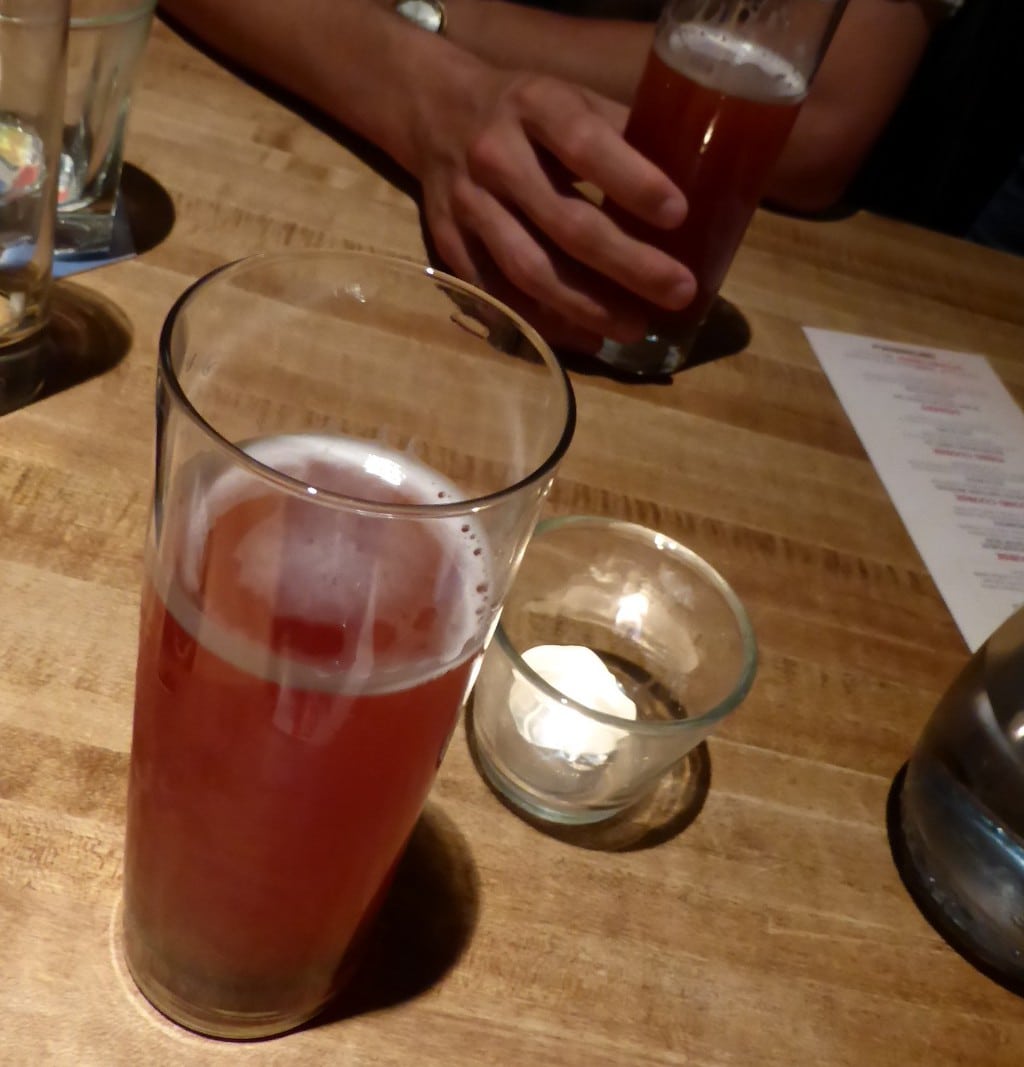 The Hoegaarden rosée had a very fresh raspberry aroma and flavour. And again, that little yeasty kick that I like so much.

I really believe that Chef Eric Mah planned the perfect set course menu, and each dish was paired thoughtfully with a well suited beer. I am already thinking about purchasing tickets for next month’s Brewmaster Dinner featuring Fullers.