Sometimes life has a way of grabbing on and taking time away from blogging. Sometimes it’s difficult to keep up with blog post when situations arise…but not all these life situations are bad! My friend and fellow blogger, Fareen at Food Mamma has just become a new mother and she may be just a bit distracted over the coming months. She needs a bit of extra time to settle in with her new family dynamic and to get to know her new little one. I’m excited and honoured to be a guest post on her blog…my first guest post!  Fareen and fellow readers; grab a cuppa and please enjoy this pie post from my kitchen to yours. 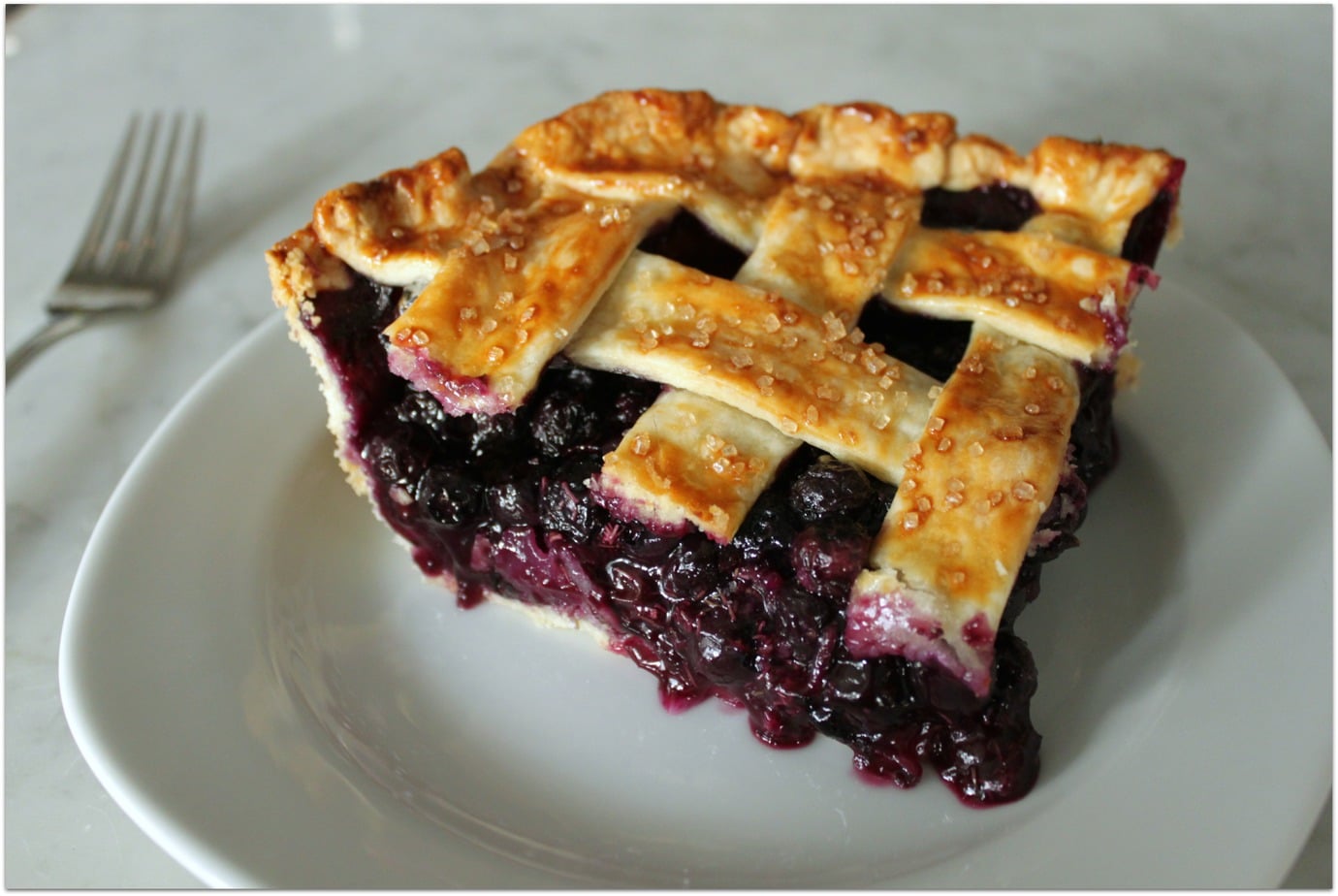 Blueberry Pie. Mmmmm. I just couldn’t get it out of my head following Monday’s Masterchef US episode.  Monday’s blueberry pie episode was inspirational; so many lovely pie variations and so many different methods of making pastry as well.  I’ve actually been making a lot more pies than I used to…using different methods and ingredients so that I can find ‘the pastry recipe’ that works for me. I’ve had great success using my KitchenAid mixer but now that I have a food processor it’s almost scary how fast I can whip up a batch of pastry. Sometimes it’s just too convenient!

The pastry method I used for this pie was described by Inspired Taste. Essentially you just add a portion of the flour, salt, and sugar then add all the butter one bit at a time pulsing in between. then you add the remainder of the butter. The butter ends up coating the flour and protecting it from the cold water you add later. In the end less gluten is formed, making the pie crust tender and flaky. I also usually have such a difficult time rolling out pastry dough…but not with this recipe! I was pretty impressed with this pastry method and so was the family. I think it may be a ‘keeper’.

Phew! Now that I have that evil pie essential that is pastry out of the way we can talk filling. Obviously blueberry. What I saw on the show was a plethora of mixes but I wanted to do something completely different. I wanted my filling to be unique and I was inspired by my childhood and a friendly reminder of it during a dessert I had at Q Haute. It was called Blueberry & Pine. These two flavours really work together though really that is no surprise considering how close they are in nature. As a kid I spent many days picking wild blueberries with my grandma in remote bush areas. She would get word on where the picking was good and off we would go, ice cream pails attached to our belts. We wouldn’t go home until they were full. As we picked we breathed in the scent of pine while we stole the odd mouthful of berries. I wanted my pie to contain that memory.

I’ve been waiting patiently for the spruce tree in my front yard to bud. I think it happened a bit later this year but last week I was able to pick a container full of the buds. I had enough to pickle a couple of jars for later use with a just enough left over to add to the pie filling. I also added some lemon zest because I think it is an essential ingredient in blueberry pie. Other than that, a large pinch of freshly ground allspice, some sugar, cornstarch, and salt. Pretty simple. 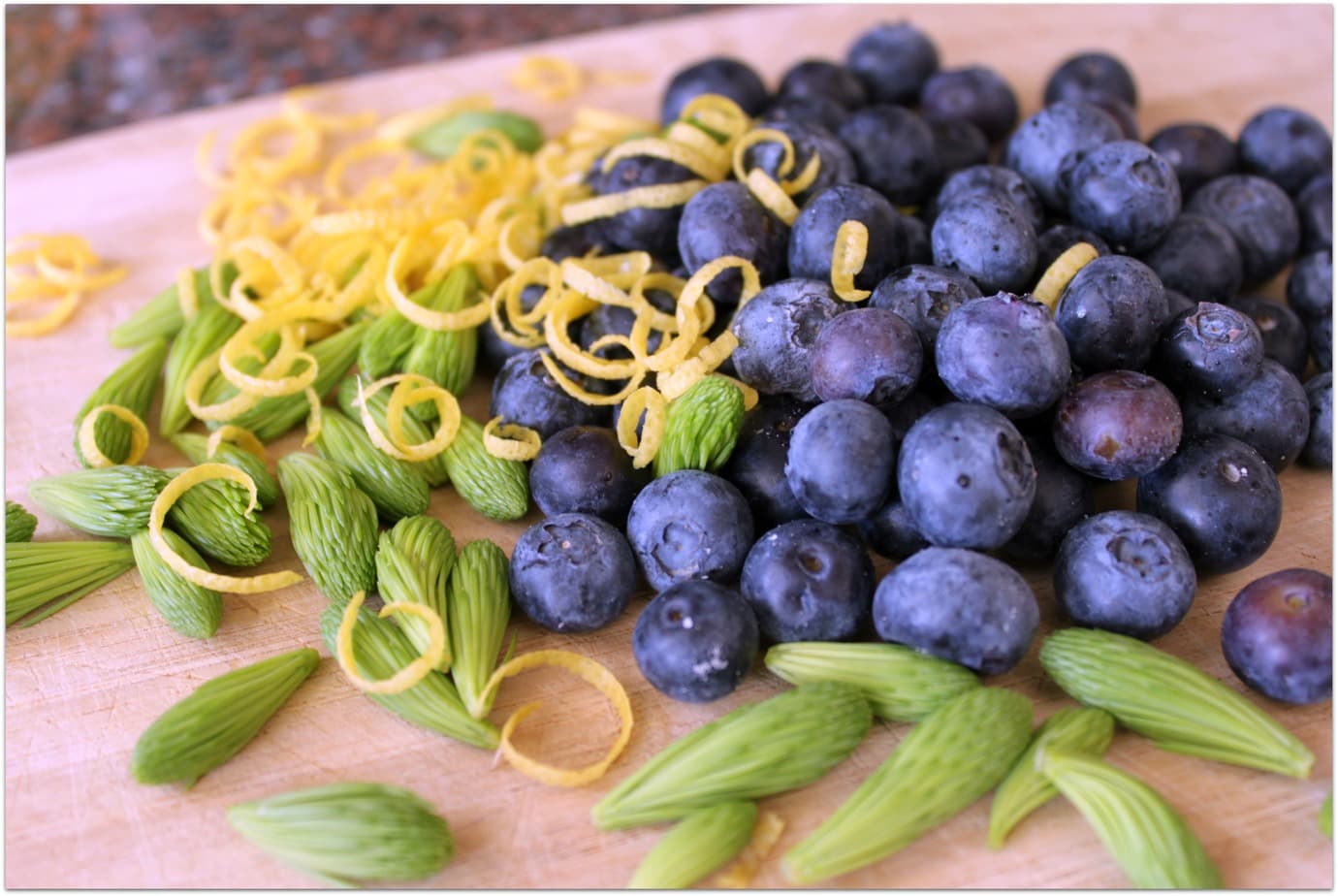 WARNING! this is the hard part….let cool for 3 hours so that the filling sets.