A couple of weeks ago I just couldn’t stop myself from bringing home a 10 kg box of Roma tomatoes and a 2 kg bag of tiny pickling cucumbers from our local farmers market. I think there is some inherent trait in my being that wakes up every fall and conditions my body to buy mass quantities of fruits and vegetables; all in the name of self preservation.

I grew up watching, then helping my grandma and mom preserve the massive quantities of vegetables from their Saskatchewan gardens every fall. I felt joy every time I was sent down to the ‘canning room’ to bring up canned spiced crab apples, plums, or pickles for the family meal.  One of my earliest memories was my great grandma (then in her 80’s) arriving back from a road trip to British Columbia. She opened the trunk of her ginormous pink Cadillac to reveal a trunk jammed full of cherries! We canned cherries that year and ate well for the following year. Most of our preserving involved the hot pack method but coming from a German background, fall was also a time for making sauerkraut.

The tomatoes were transformed into a passata within the next couple of days but for the cucumbers I had a little experiment in mind.

I’d been hearing a lot about recent culinary experiments involving lacto fermentation and they really piqued my interest. Lacto fermentation is nothing new, in fact people have been fermenting for hundreds, even thousands of years. Before refrigeration was widely available, people had to find a way to preserve food so they could live through annual seasonal droughts and varied growing seasons. Drying, Salting, and fermentation were ways to extend the availability of food. Here is a list of foods from around the world that are preserved through fermentation:

Provided the food is prepared and stored properly, fermented (or cultured) foods can be very beneficial health wise. The naturally occurring bacteria responsible for fermentation break down the food, making it easier to digest. As well, they release lactic acid which 1) makes the food taste sour and 2) prevents the growth of ‘bad’ or putrefying bacteria. During the fermentation process new vitamins (especially B vitamins) are even created!

The day I started my pickles, I called my Grandma to ask if she had even heard of such a thing or if Great Grandma had ever made pickles this way. As far as I can remember my Grandma has always made her dill pickles by making a brine and sealing them in quart jars with some vinegar, dill, garlic, and pickling spices. When I was young it was always my job to pack the jars so she could ladle in the hot brine, screw on the lid, and process in the huge hot water canner. It was a lot of work and the main reason I say no every time the kids ask me to make Grandma’s pickles. Besides, my mom usually keeps us in good supply! This year, however, she is having a difficult time keeping the jars sealed and many of the jars have started to ferment…in a bad way.

Back to that phone call. Grandma did seem to remember that there was a large hole in the basement floor in the old house. The hole was large enough for a good sized crock to fit inside. Every summer Great Grandma would fill the crock up with baby cucumbers and then cover them with a brine. In the fall, the pickles were ready to be eaten and there were pickles on the table at every meal for the rest of the year. Besides Great Grandma’s fermented pickles there was always sauerkraut which is also lacto fermented. It really is amazing how different food preservation techniques come and go. One of these days I will be making my own sauerkraut if I can ever find a proper sized crock to make it in. I’ll be sure not to have visitors for around 3 weeks though because the house is sure to smell! 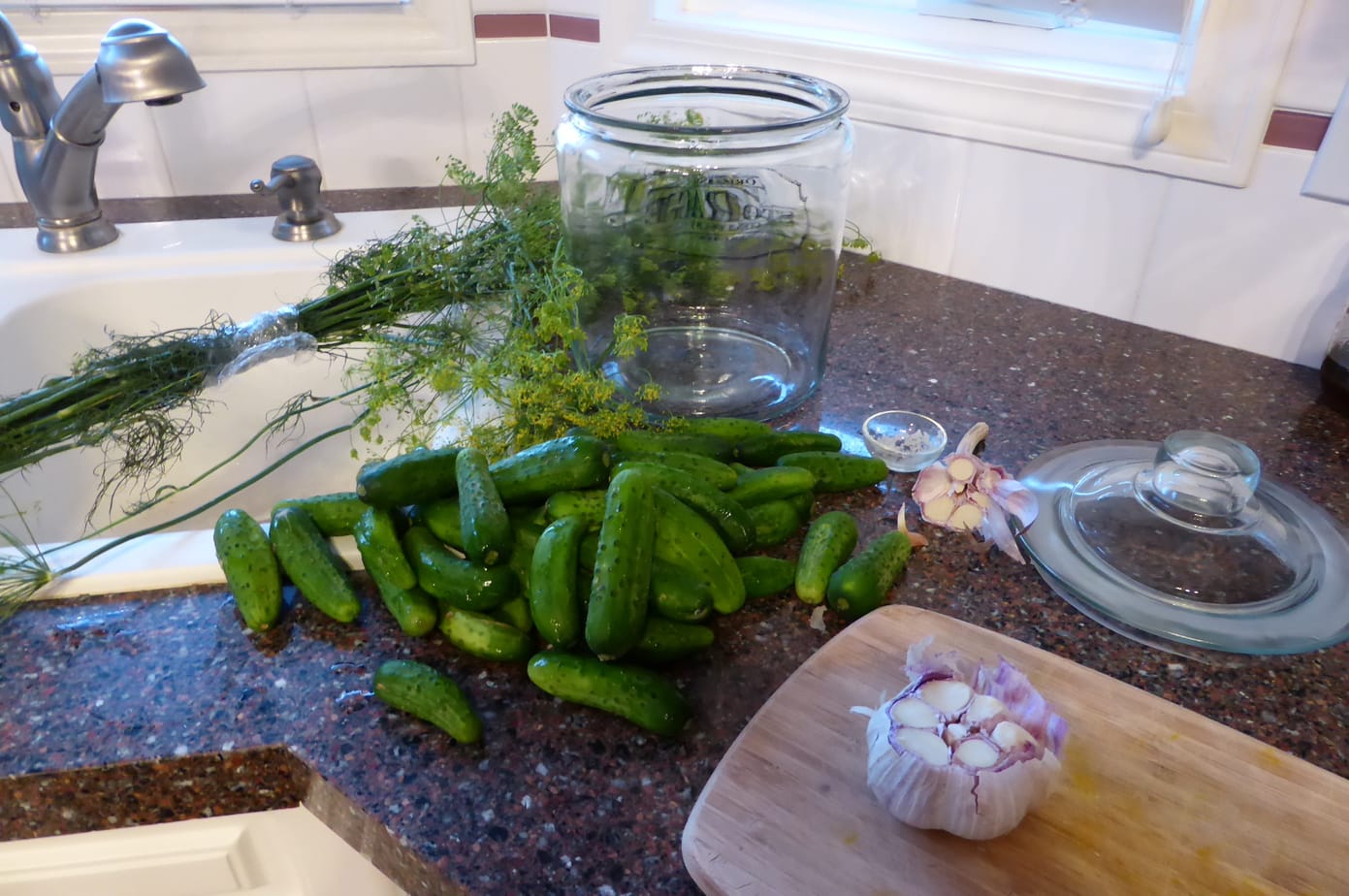 I started out with the freshest ingredients possible from Calgary Farmer’s Market. A 2 kg bag of tiny cucumbers, a very pungent head of garlic and dill. Water and salt were the last two ingredients required. I scrubbed the jar and lid clean, then scrubbed the cucumbers and trimmed the stem end off. This is supposed to prevent the cucumbers from turning to mush. 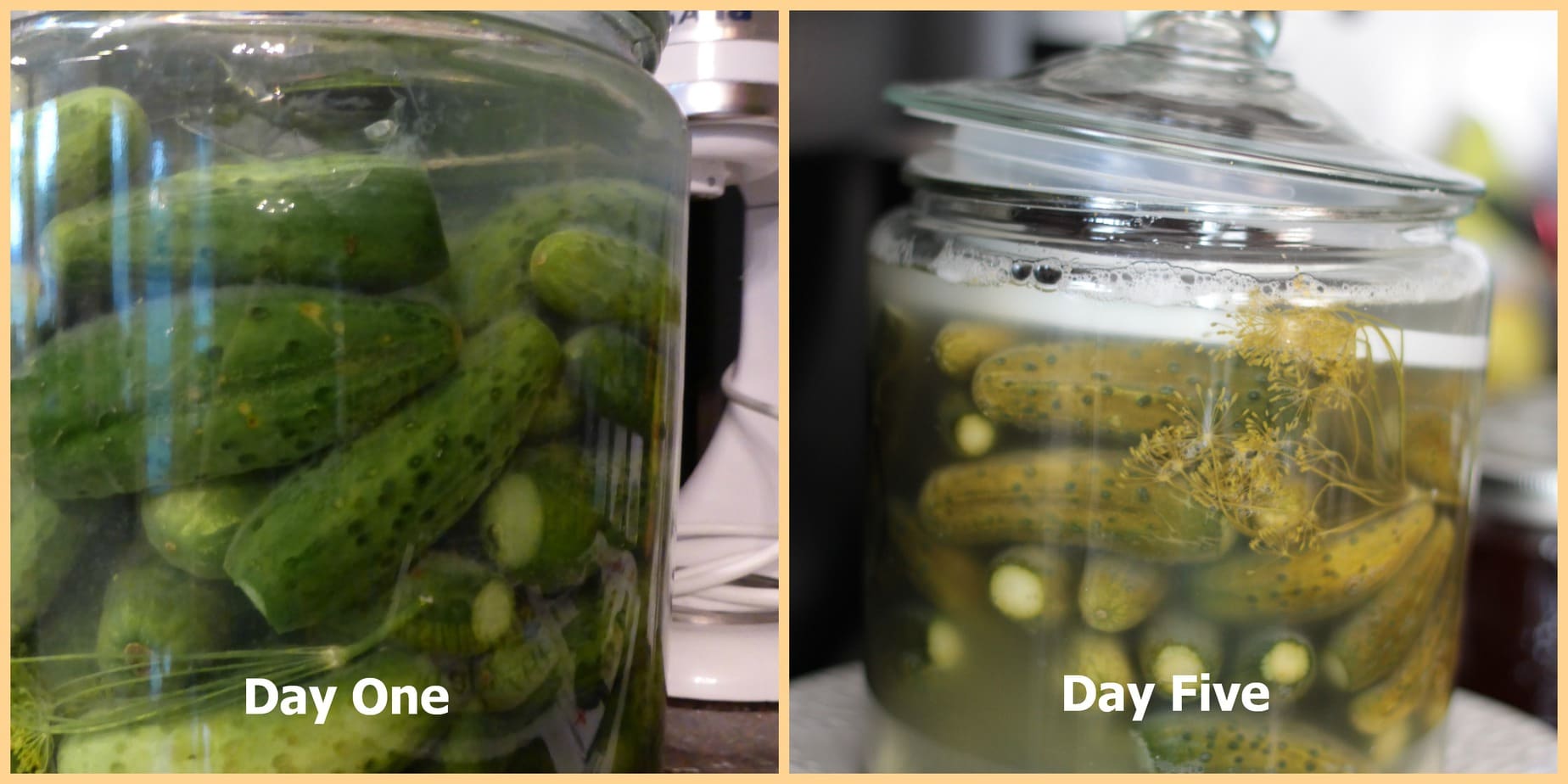 I found it a bit difficult trying to keep the cucumbers submerged in the brine. Originally I filled a ziploc baggie with brine and floated it on top but eventually I decided a plastic container lid weighed down by a small bowl would keep the cucumbers submerged and allow for airflow. Though the jar that I used had a lid with a rubber seal I made sure to keep it slightly open to let gases escape. On Day 1 the brine was nice and clear, with a slight blue tinge. On Day two I saw little bubbles forming around the cucumbers. The bubbles became larger and within the next couple of days I had to keep a plate under the jar to catch some of the brine that was escaping.

On day 4 I tried my first ‘pickle’. It was extremely salty and still tasted quite like a cucumber…it was quite bitter.  After that I made a point of trying a pickle every couple of days to see how the flavours were progressing.  On day 12 I was a bit concerned because the brine had gone really cloudy and there was a thick, yeasty scum on the surface as well as resting on the top parts of the pickles. When I tried one, it did have a strong yeasty flavour which was unappealing.  I thought for a while and decided that the bacteria must have some sort of a life cycle and the natural process of fermentation would continue as they lived and died. I considered that the scum must be dead bacteria so I skimmed it off and let the experiment continue.  I would say the pickles that I tried on Day 16 were most satisfying and barely tasted of yeast at all.

In all, I fermented the cucumbers for a total of 18 days. I packed the pickles into three quart jars and added vinegar until the jar was 1/3 full then topped it up with water. Then I put them in the refrigerator. They should keep that way for quite a while. 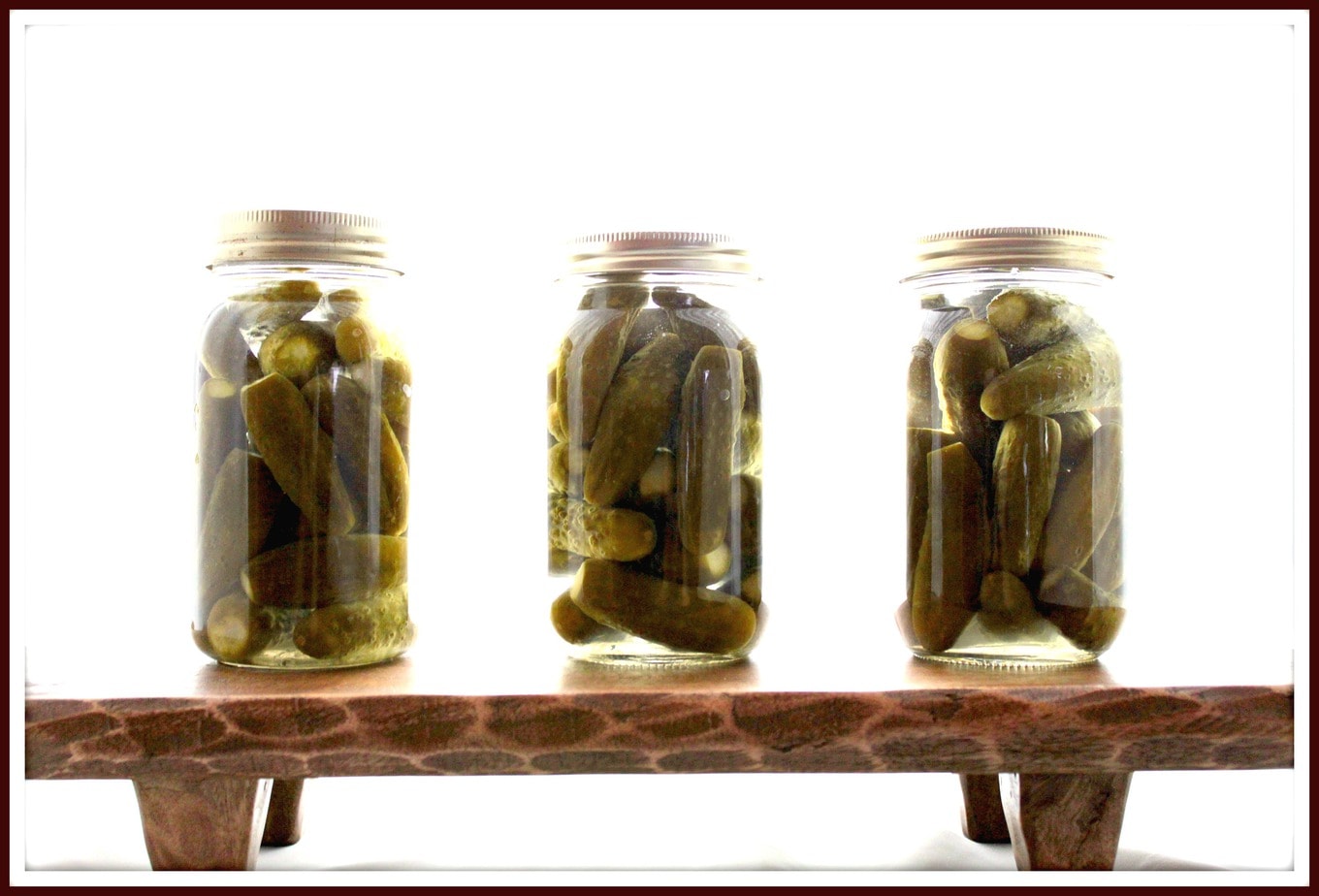 The Canadian Food Experience Project began on June 7 2013. As we (participants) share our collective stories through our regional food experiences,  we hope to bring global clarity to our Canadian culinary identity.