Even though I’ve been pretty blasé about this blog during these summer weeks I’ve still been cooking. Better yet…I’ve been sharing those cooking skills with my daughter who has had an awakening of sorts. Formerly content to spend her time drawing and watching physics lectures online, she has now suddenly become interested in cooking and what she puts into her body. We’re talking about a teen here, that would bake a batch of cookies (the only cooking skill she deemed necessary until now) and eat them all in her room. All of that is over. In fact, she won’t even eat a cookie let alone bake one.

I’m keeping a close eye on her to make sure she isn’t obsessing too much and I’ve asked what her ultimate goal is. Apparently she wants to become ‘strong’ and try out for the rugby team at school in the fall. I don’t have the heart to tell her that her 5′ 1″ frame is a bit too petite for rugby but I’ll go along with the charade. So far I’ve had fun cooking with her and teaching her how to marinade, etc. The other day she suggested that she would make meatless burgers. It sounded like a good idea at the time, but then again I wasn’t really thinking about her two meat loving brothers. One in particular would be coming home from football practice and craving vast amounts of meat.

So, she made the burgers. They were made of cannellini  beans and quinoa so they did have a lot of protein in them. I have to give her credit because they actually did taste pretty good but we all agreed that next time they would be more ‘slider style’ because they were excessively filling. I also think with a little playing around we could find the fine balance between too sloppy and too dry.  The recipe made four gigantic burgers so there were none left by the time her brother got back from football. We ended up just barbequing a couple of chicken burgers for him instead.

To accompany the burgers we made a salad together. While I chopped all the vegetables, my daughter J made the vinaigrette.  The salad was a nice mix of crunchy elements but I think I need to take the time to show her how to balance the flavours. We were in a bit of a rush so we left it as it was…made directly (with some substitutions) from Roots by Diane Morgan. Whether it was the substitutions, the recipe itself, or just lack of tasting by J I’ll never know but it was very sour and needed a bit of sweet and salty to balance out. I guess the only way to be sure is to make it again and make it a learning lesson. It does look lovely though.

I had found fresh the lotus root at the Asian market and was excited about making some sort of salad with it. Previously I had tried to marinate it like to make it similar to something we had in South Korea with no luck. I’ve also tried to deep fry it and that didn’t work well either (probably because I have a fear of deep frying). So, salad it was. I peeled the root and sliced it about 1/8 inch thick. While I was doing this I noticed thin, barely there ‘hairs’ and though it was really odd because I have really coarse hair…then I realized these were the fibers from the root. They were so delicate, almost like a spider’s web.  J tried one raw and didn’t exactly like the texture but after I had blanched the slices in boiling water for about a minute the texture had changed for the better. The rest of the salad was pretty easy to throw together.

Mix ingredients together in a small bowl.

10 oz lotus root, peeled and cut into 1/8 inch thick and blanched for a short time so they are still crisp

Blot the lotus root slices dry and add to a large bowl along with apple, cabbage, cilantro, and onion. Pour dressing over all. Add sesame seeds. 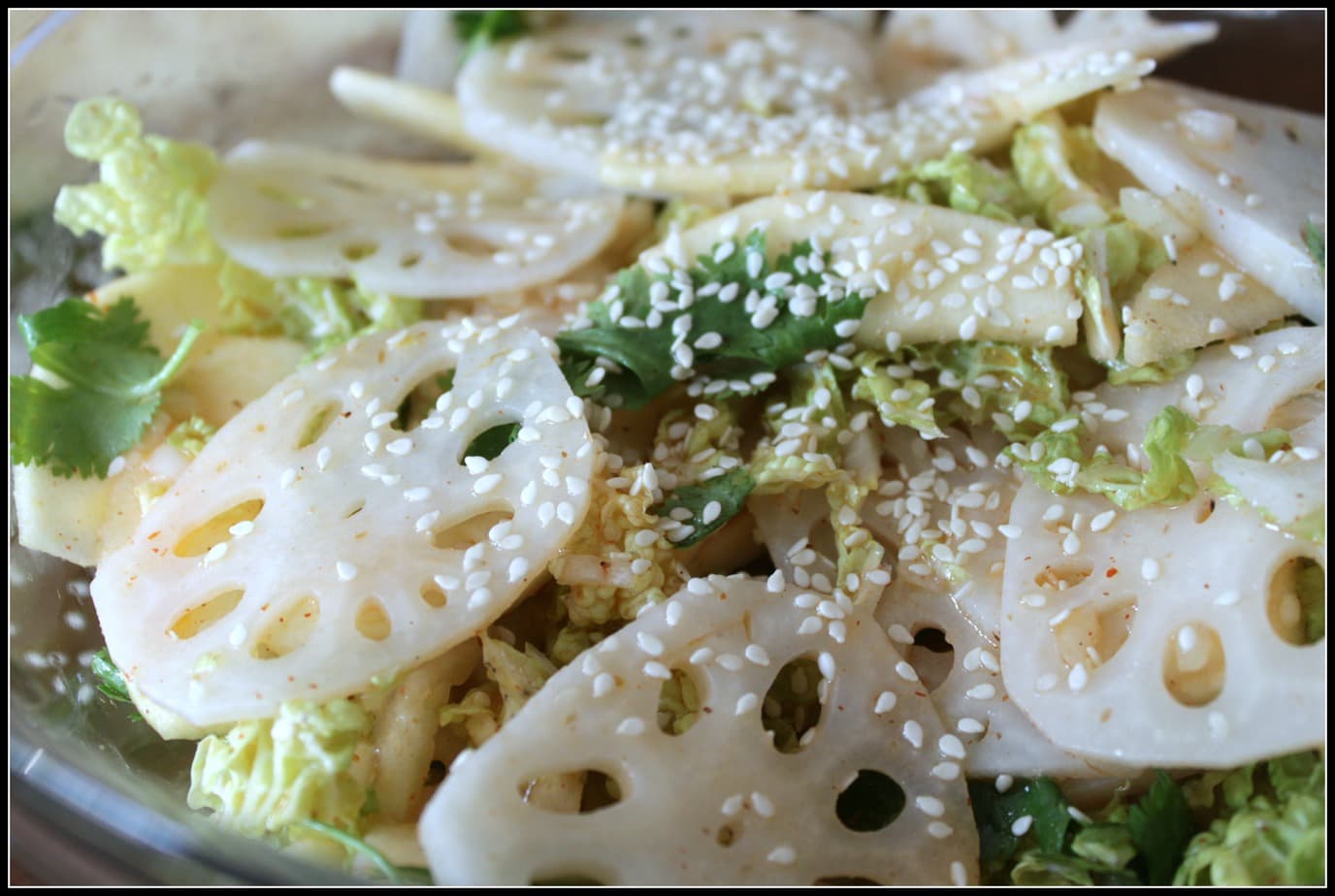