On Mondays, I volunteer in the Family Centre at the YMCA. I get to meet all sorts of people, and many of those are immigrants from all over the world. Usually there are only ball chasing, table grabbing kids that populate the ping pong table but yesterday I had an older Asian couple to watch. They were pretty good, he was better but she was also able to hold her own. As I watched I noted they had a youthful glow and were very mobile despite their age.  During one of their breaks, she asked about the volunteer program and whether or not the YMCA would have a problem with extended absences for holidays. She said that they went on a yearly month long trip ‘home’, home being Hong Kong. What luck! I had been looking for a way to somehow steer the conversation towards food because I had visited T&T Supermarket and bought a pork belly that day. I have been told (by an Asian) that I must have been part Asian in a past life because I like to talk about food so much. I’m barely done a meal when I begin to plot my next…I enjoy comparing food experiences and finds, I could talk about food all day. Anyway, I decided to ask her how she cooked her pork belly. She explained you can roast it with salt and pepper, or make some sort of soup with it. Aha! this is what I was fishing for…soup or my preference, an extra saucy braise. Turns out I must be part Asian after all because she and I liked our pork in exactly the same way. Slow cooked in a master stock; with star anise, potatoes and whatever other starchy vegetable you want to use. Last time I made this dish I used sweet potato but I didn’t like how mushy it got. It started to shed bits into my dark, clear, aromatic stock. Not cool.
Today, since it is -25C outside, I have decided to have the oven going. I’m going to roast beets and sweet potatoes and possibly make some rye bread. Ambitious I know, especially since I have to stick the pork belly in there as well.

Hours later…yes, well it turns out I was overly ambitious. I got side tracked while looking for my pork belly recipe. The last time I made it was in Australia, so I’m guessing that somehow I packed or recycled the magazine with the recipe.  On the plus side, I did end up spending hours cleaning and organizing the crawl space and also did the pantry.  With no recipe in hand, I tried to find the recipe online.  None of the online searches I did turned up THE recipe but I did find some that were close. As always, I used the recipe as a guideline but added what I thought was missing from my misplaced recipe.

If you are Asian and you are reading this turn away now!  To start the recipe, I cut off the skin and a good chunk of the precious fat underneath. I know, sacrilege! I’ve made this before and my kids did not like the ginormous chunks of buttery, spicy goodness of the rendered pork fat. I guess it’s an acquired taste. After slicing off the top layers I cubed the pork into chunks that were about 4cm square. I threw these into my braiser, added a bit of peanut oil and browned them all up. I then deglazed the pan with a bit of shao-xing (chinese cooking wine), added dark and light soy sauce, a full knob of ginger (sliced), two star anise, two birds eye chilies and some brown sugar. 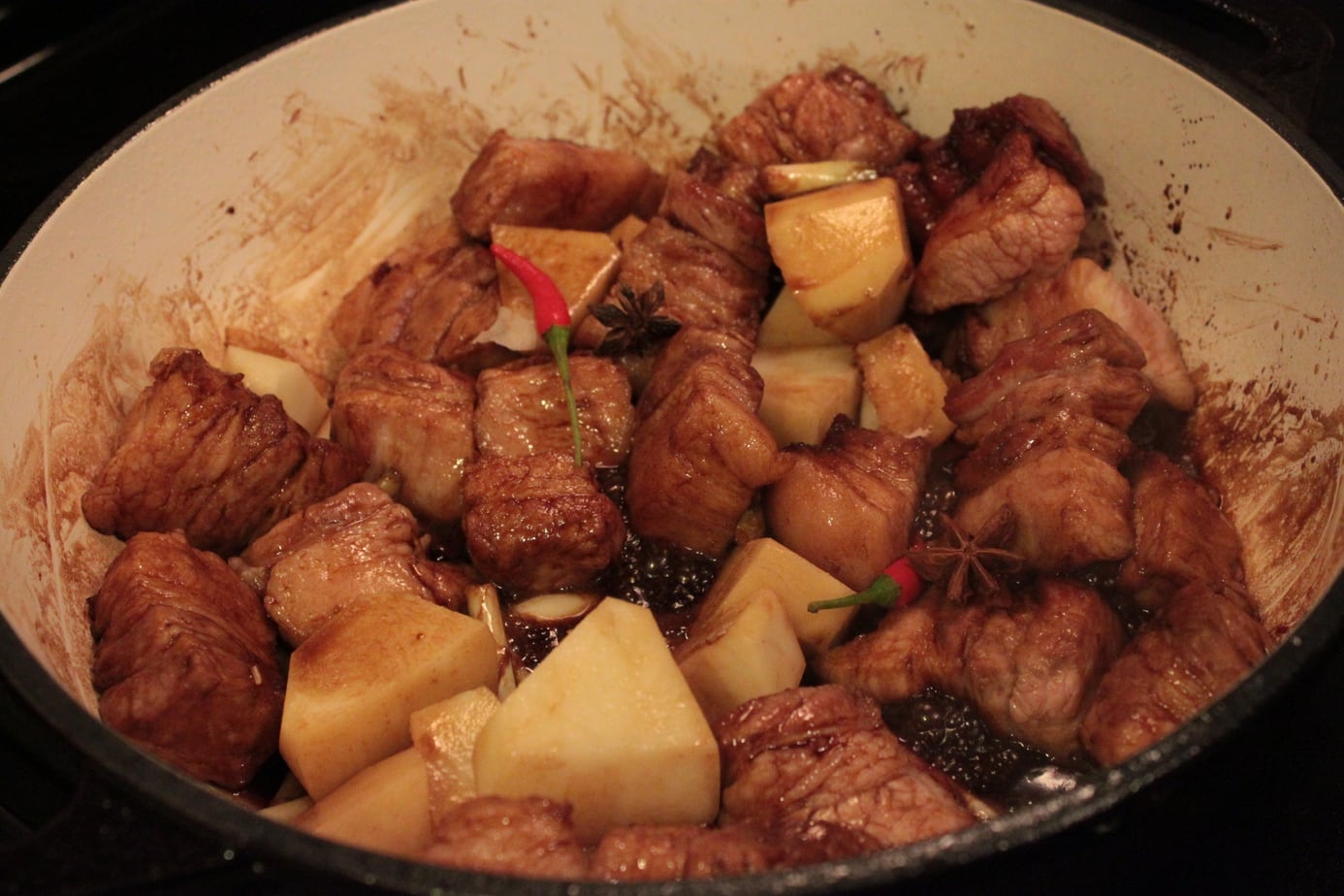 I let that cook all together a bit while I was peeling and cubing some potatoes, spring onion ends, and parsnips. Those last three ingredients went into the pot and were then covered with some chicken stock.  I would normally add master stock instead of chicken stock but since this is my first time cooking this dish here I don’t have any saved up. After we have finished eating the pork belly tonight, I will strain out the liquid and it will become my future master stock. This stock will be frozen and used for future delicious Asian style recipes. Most likely, those who cook a lot of this type of food would just refrigerate it or keep on cooking with it and adding to the flavours. These days, we are all more concerned about health and safety so we are careful to handle our food wisely.

I was so busy all day that I didn’t start the pork until 5pm. I was seriously concerned that it wouldn’t be tender enough by the time everyone came home from karate but it was absolutely perfect! 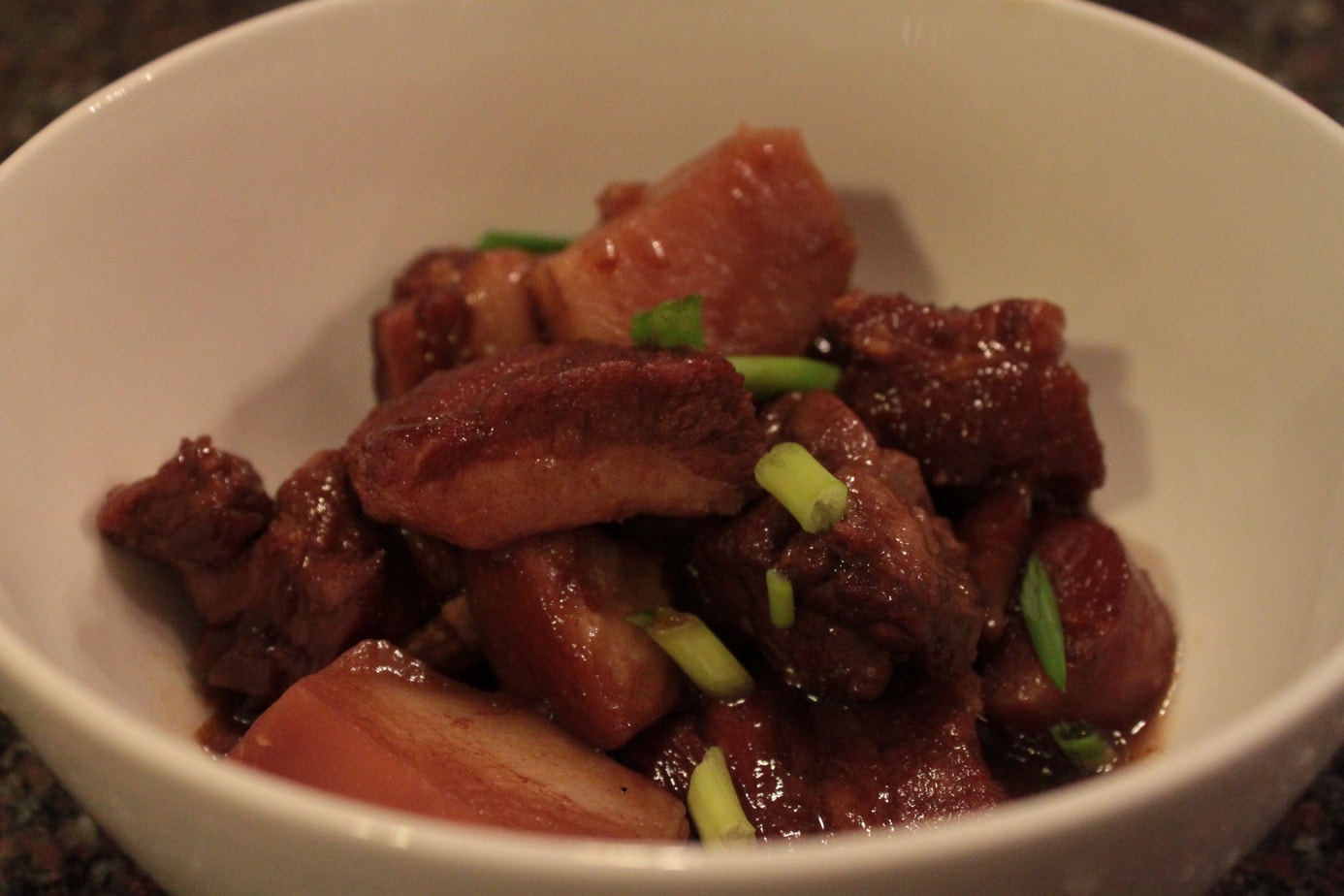 The end result was very close to my original recipe. While I was happy with the sweet, salty and  sour balance, we all agreed there needed to be more sauce.  The addition of a  couple more chilies, star anise and the addition of cinnamon sticks would make it perfect.

A Visit to Bite Groceteria