Rain Dog Bar is an unpretentious beer focused establishment located in Calgary’s Inglewood community. The bar focuses on specialty import beers, local craft beers, and the food that goes with them.

It’s been a long time since I’ve written about beer or been so darn excited for a restaurant opening that I’ve written a review. Even though I have not publicly shared my visits to Rain Dog Bar I am, undoubtedly, smitten.

Inside a broken clock
Splashing the wine
With all the Rain Dogs
Taxi, we’d rather walk
Huddle a doorway with the Rain Dogs
For I am a Rain Dog, too

A dim door marked only by the dark silhouette of a dog leads to a long stairwell, serious in it’s intent and consequence. Halfway up the beat of a sound system reaches out with authority and saporous aromas surround you. You’re where you need to be; Rain Dog Bar.

Inglewood’s Rain Dog Bar opened quietly on a Thursday in February, heralded only with a cryptic tweet, sans text. For some, panic ensued. Where is Rain Dog Bar? What does it serve? Is it a bar for Dogs?

Those who knew about the long awaited project, smiled smugly and offered their support in term of a retweet, only serving to further the initial furor. 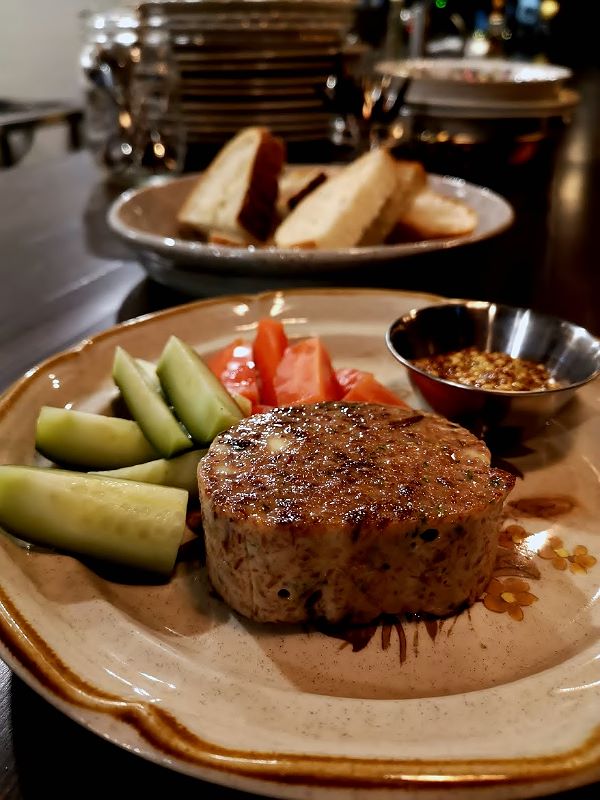 The unconventional tweet served its purpose in the way in which it was intended. That is to say, it generated a fair amount of buzz. Friends who had been eagerly awaiting the opening, dropped by almost immediately to offer their support. Word of mouth, coupled with the trickle of information via social media began to draw a few more curious souls nightly. By the second week of operation, full capacity was attained. In the industry, we call that a soft opening.

What the Hell is Rain Dog Bar?

Rain Dog Bar is a place for beer and food enthusiasts in Calgary’s Inglewood community. Located just above Gorilla Whale, the entrance is a door wedged between two doors belonging to the aforementioned restaurant. The establishment focuses on specialty import beers and the food that goes with them.

While there are local craft beers always available on tap, the concept plays more to the sophisticated palate of beer connoisseurs searching for unique styles and difficult to find brews. The beer and food menus have been carefully curated to extract the utmost enjoyment during consumption.

The Ambiance at Rain Dog Bar

The east side of the space is occupied by a large open concept kitchen and attached bar while the owner’s private beer glassware collection is visible overhead.

The space reaches peak ‘dorm room decor’ with a cinder block bookshelf arrangement (including an impressive collection of brewing and beer literature) occupying the North wall. Large south facing windows let in an abundance of light and provide the perfect people-watching perch.

The mastermind behind this space is longtime restaurant industry veteran, Bill Bonar. Bill obtained the very first cicerone certification in Alberta and has worked at many Calgary restaurants, including Winebar Kensington and Taste (former occupant of the Shelter space on 1st street SW).

We met Bill during the ‘set up’ phase of Rain Dog Bar, when he was killing time pouring beers in the Annex Ales taproom. It was immediately clear that his passion and knowledge of beer went way beyond wiping down a bar mat.

Besides picking out killer alt tunes and his excellent customer service, Bill is a treasure trove of information regarding all things beer. He has an excellent palate and loves to chat about Rain Dog’s extensive beer menu, while offering complementary commentary on the diverse dining menu. It’s beer education in the most unpretentious and delicious way.

Opening Rain Dog Bar has been a life long dream for Bill. He, along with his partner Mel, offer a unique concept for Calgary. It’s a space that I hope we’ll be visiting for a long time to come.

This bar is nothing short of a bloody miracle. A refuge of exceptional quality during a time when mediocrity is the rule rather than exception.

A Word About the Menu

The menu at Rain Dog Bar is a curious array of soul warming, satisfying dishes designed to complement the beer menu. It’s a collaboration between the owners, partners, and Chef Chris Lorenz, formerly of Taste restaurant. The dishes are imaginative, well excecuted and often contain beer…which is a great thing. I’m looking forward to trying many more in the future.

Visiting Rain Dog Bar? Save this Pin for Later.