It may surprise you to know that with some things I can be a bit of a cheap-o. I read my flyers religiously every week and keep an eye out for sales on items I would buy anyway…and I stock up. That’s probably why at one point just before Christmas I had 12 2L containers of smooth peanut butter in my basement at one time. I do have my limits (mostly outlined by lack of space to put things) but apparently not when it comes to peanut butter. Funny thing is that I don’t even eat it!

I’ve been wanting to make some braised beef short ribs for quite some time now but beef is one of those items that I watch prices on. I don’t really know why but I’ll venture a guess that it’s because I grew up on a beef farm. It always felt like we got our meat ‘for free’ from the freezer downstairs so that when I moved out and saw how expensive it was I became a lot more vigilant with price watching. I have noticed that beef short ribs do not go on sale all that often so when I found some at Save On Foods the other day, I just had to grab a couple of packages. The price per pound was $4.99 so the packages I bought were both around the $11.00 mark on sale where they would usually cost around $14.00.

It was 5:15 already and we had to leave for hockey in an hour…so I had a quick search for a recipe making a beeline for the bon appetit website. I knew that any recipe I found on there would be worth making. When I found the recipe for the Red Wine Braised Short Ribs I glanced at the ingredients and was happy to see that I had them all but I wasn’t sure I wanted to raid my wine racks for a whole bottle of Cabernet Sauvignon. I wasn’t going to use the Cab Sav we brought back with us from Australia or the Napa Valley one we got for Christmas so I quickly phoned my oldest ‘kid’. Luckily he was on his way home from work and is of age to purchase alcohol. Within minutes I had everything I needed to make the recipe.

I began by browning the short ribs in a bit of oil. Instead of chopping up three onions I peeled a bag of small cipollini onions and diced a half of a regular onion. When the the ribs were done browning I removed them from the pan and added the onions along with some carrots and celery. After those had softened a bit it was time to add the tomato paste and flour. Thankfully my son arrived with the Cab Sav in the nick of time. I added the ribs back in and topped them with the bottle of wine, saving a couple of drops for the cook and her accomplice. I had just enough time to reduce the wine by half, add the garlic, herbs, and stock. Dinner was in the oven before we had to leave for hockey!

It was a beautiful night but all I could think about was the aroma that was going to greet us when we returned back home. I realized that we had no potatoes so I performed the phone a friend option. You know, the one where you are missing a crucial ingredient so you phone a friend to bring it and share your meal? Luckily I have a willing participant in this sort of friendship and my friend Stacey arrived with the mashed potatoes very nearly at the same time we pulled onto the street.

Stacey’s potatoes were fabulous! She’s a bachelorette and doesn’t do a lot of cooking, especially for a family of five! Even though I found out she had to run out and get a potato masher (LOL!) she nailed the potatoes bang on. Yeah, they made a perfect bed for the star of the show. 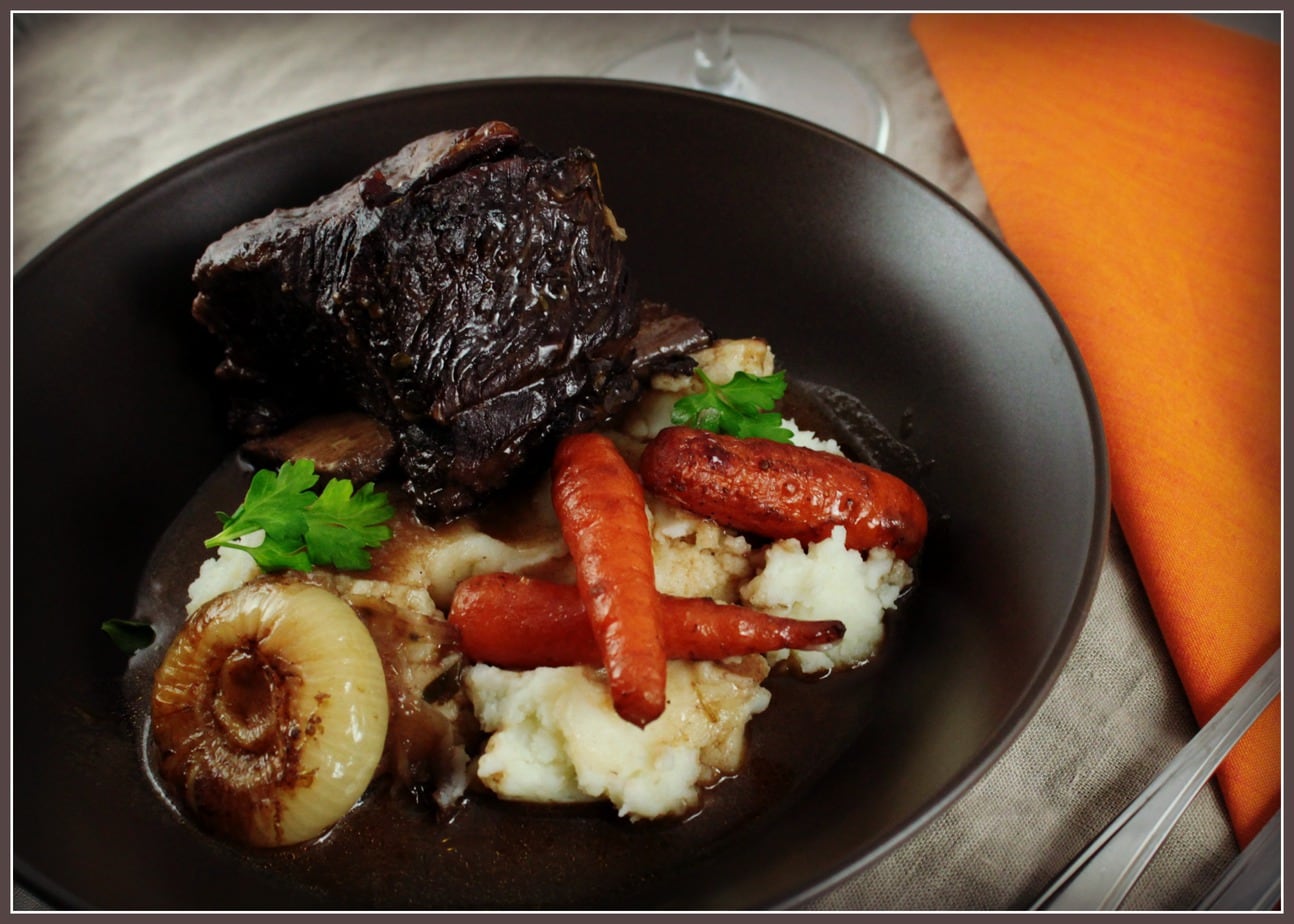 I was concerned 2 1/2 hours wasn’t going to be long enough to make the ribs fall off the bone but when I took a fork to try I was pleasantly surprised. No one seated at the dinner table was complaining, in fact, there was almost a fight for the last rib…