Our next stop after Caen was the Loire Valley. The drive from Caen to Blois and  our next stay at Château de la Rozelle was a bit more direct than our drive from Versailles to Caen. We found the Michelin travel site online and physically wrote down every motorway, exit, toll and travel time we needed in order to get to Blois, thus eliminating the reliance on our car GPS.  We still underestimated the time it would take to travel there and arrived at Château de la Rozelle at 21:15. The hostess was a bit beside herself and informed us she had just left a message on our home (?!) answering machine as reception is generally closed at 21:00 and she had begun to worry. She was an adorable woman and set to making us comfortable right away.  She gave us a brief tour of the château and let us know that we could have a very ‘peasant like’ bite to eat in the dining room, should we wish. Hmmmm yeah of course we wished!  Never would I ever have thought that we would be staying in a French  château in the Loire Valley…eating French ‘peasant food’, whatever that is…

We started with aperitifs. Here’s hubby enjoying his Kir Royale, a aperitif made from Champagne and crème de cassis (blackcurrant liqueur).

We also included a bottle of wine from nearby Château Cheverny. Funny though, this has been the only bottle I’ve ever attempted to send back in a restaurant. The server wouldn’t let me and insisted it was fine! This was also the only place where the server offered the children wine. They thought it was funny. 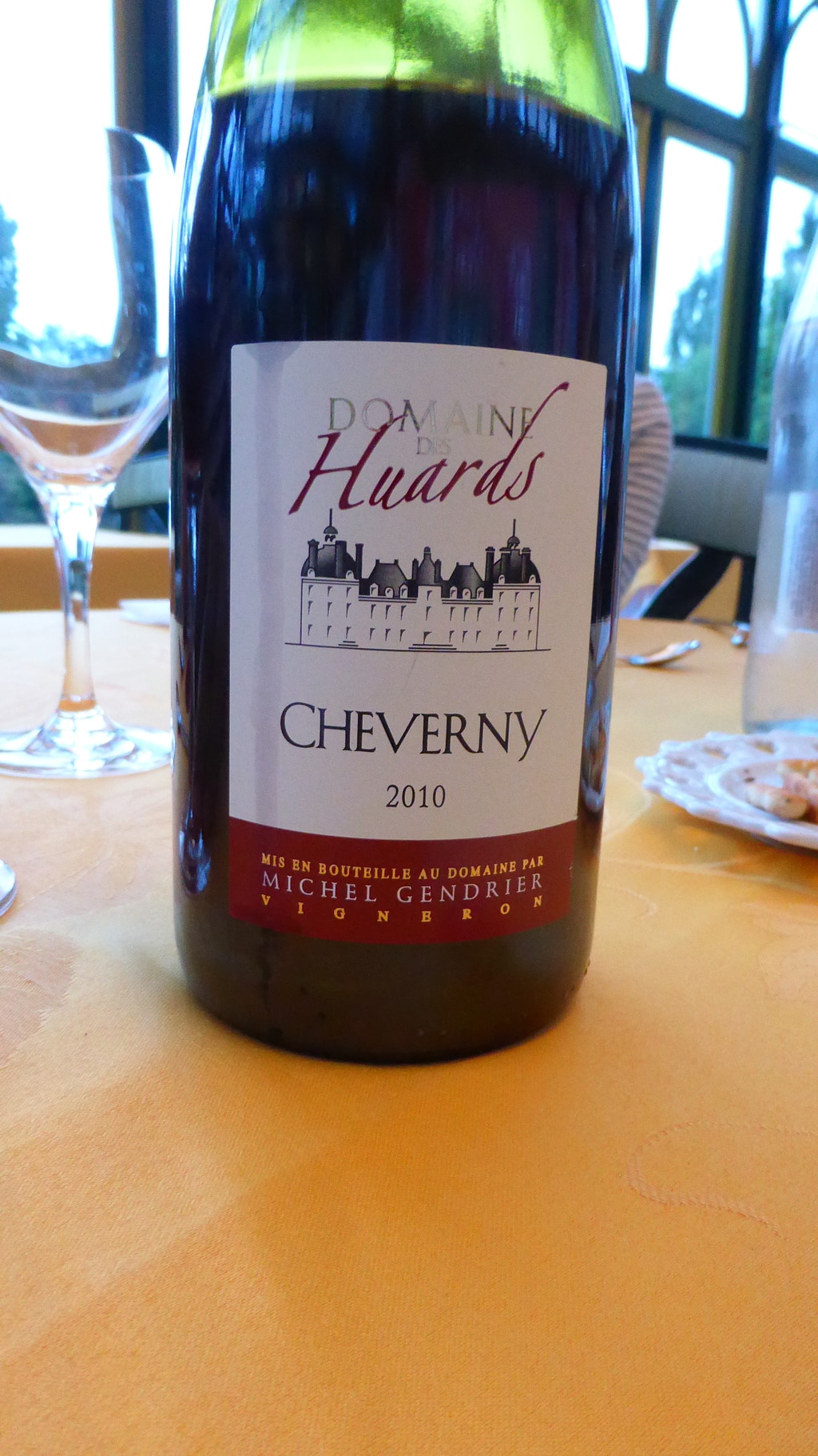 Our dinners were simple but delicious. There was basically a choice between a quiche or a tarte…or pizza as we later discovered. 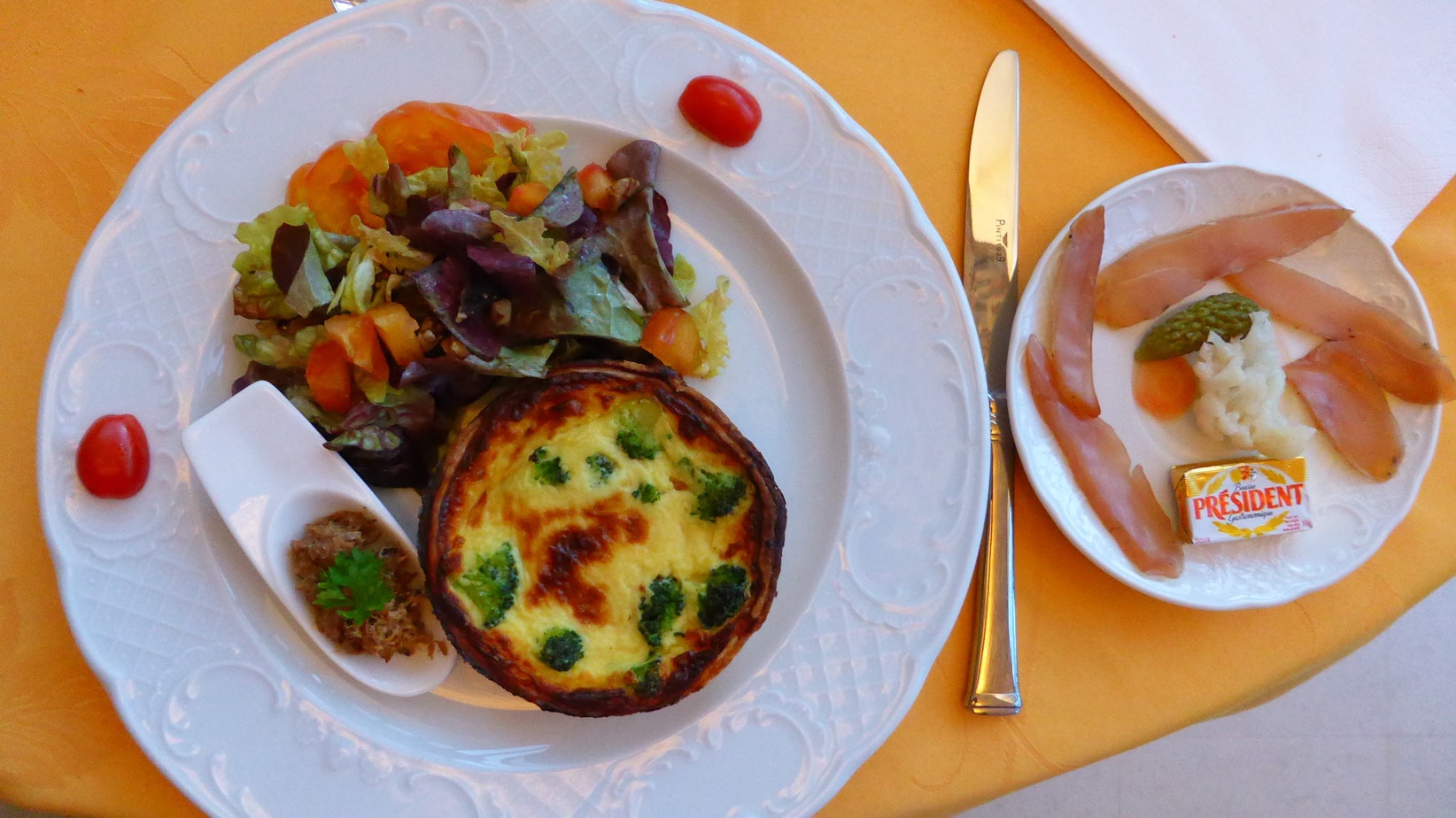 The kids each had some kind of quiche. It was served with a side salad and an odd dry pork mixture…then some smoked raw chicken breast slices with pickles. I had some qualms about the chicken. It was ODD with a smokey flavour and jerky like texture but a bit softer. Those veggies were pickle bombs. We all made sour faces when we ate them. 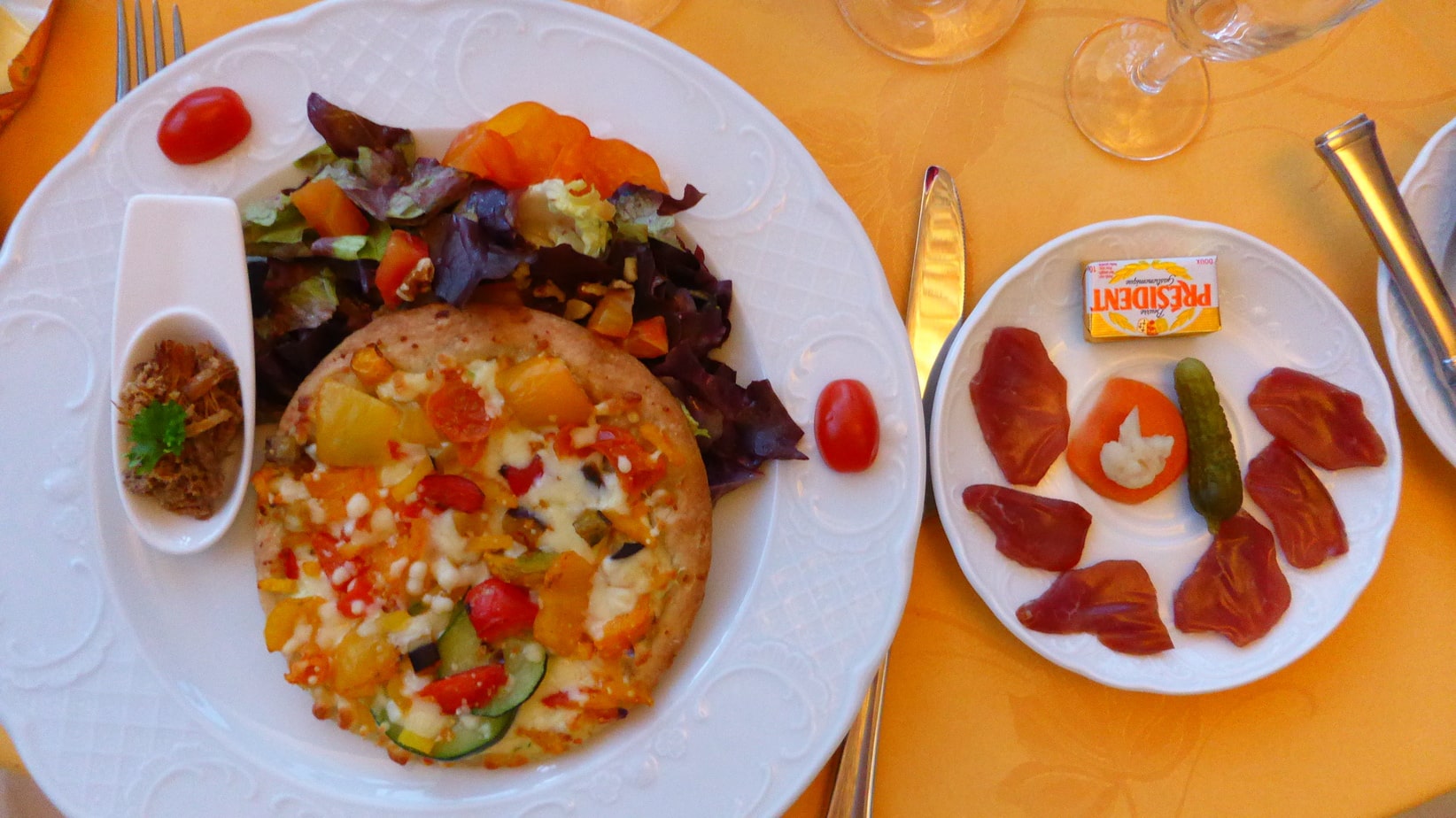 Hubby and I had the veggie pies, which were actually pizzas along with the dried pork (relish?), salad and smoked/dried pork tenderloin. Pork and Chicken, not really meats I wanted to eat raw but we survived.

Of course we couldn’t leave without dessert. Hubby had an apricot tarte, while I had tarte tatin with vanilla ice cream…I think mine was the winner! 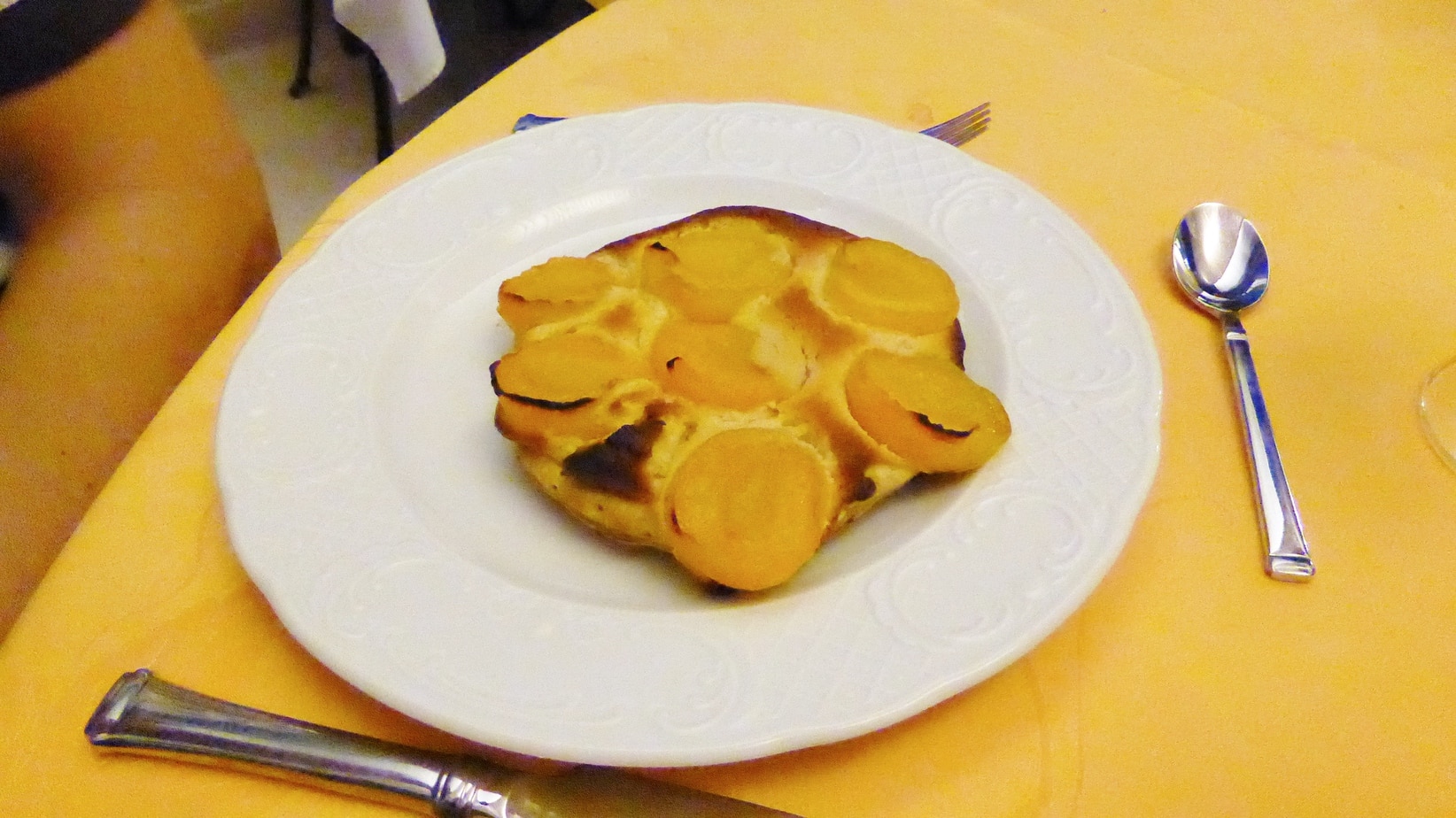 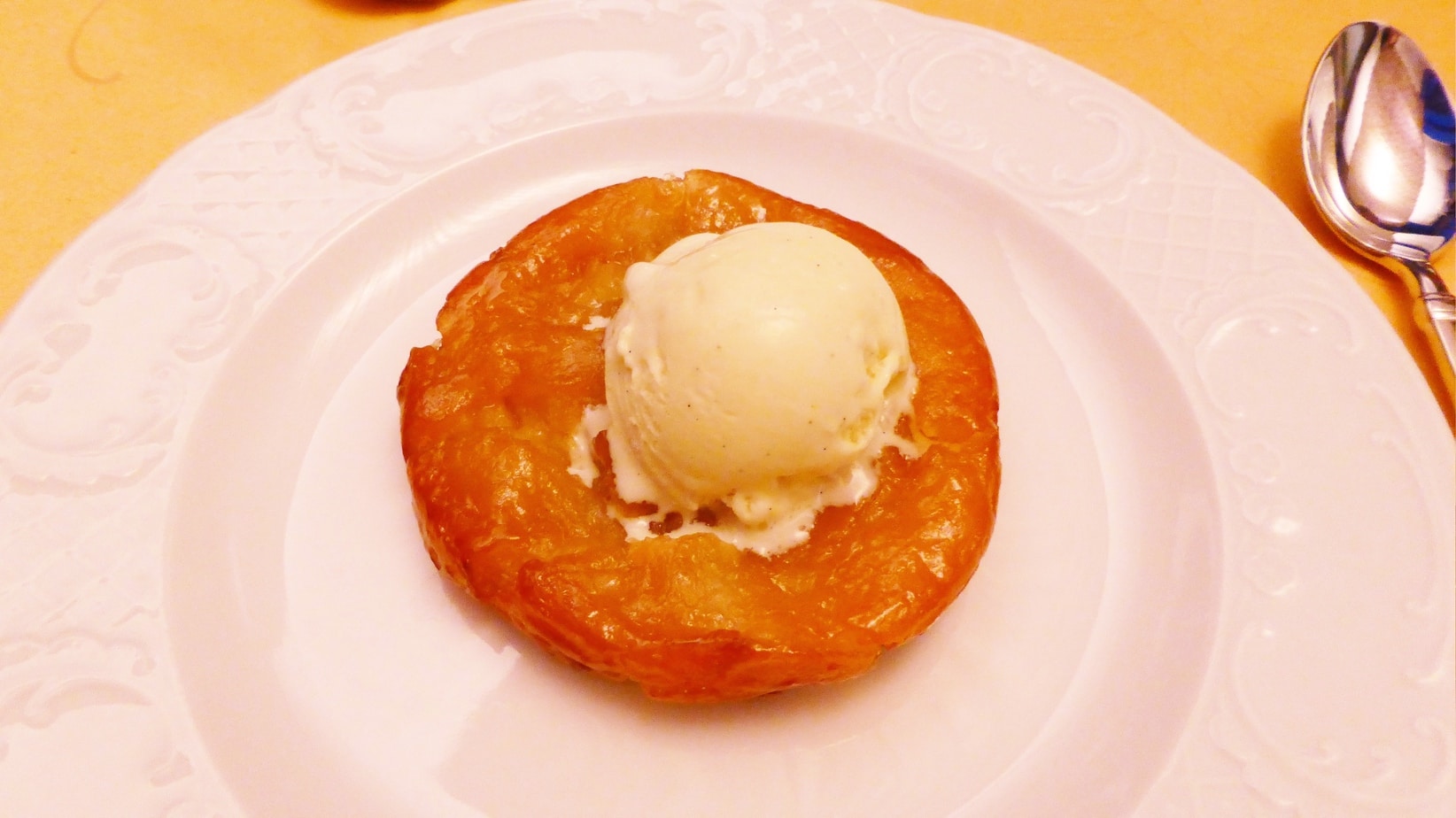 In truth, this wasn’t the best place we’d eaten but it was the most convenient. We really didn’t want to be out looking for a place to eat in the dark on a Friday night in an area we weren’t familiar with.  All the included breakfasts during our stay were delicious but were the standard croissants, baguettes, boiled eggs, luncheon meat, yoghurt and fruit.