This morning, a simple question from a food blogger friend, Shareba Abdul (In Search of Yummy-ness), got me to thinking. ‘What do you do to prevent blogger burnout?’ It’s not as strange a question as you may think. Ask any blogger this question and they can tell you that what you see on their website is not always ‘true to life’. When all you see on the blog is great recipes and photos of perfect meatloaves and cinnamon buns, you (the reader) get a skewed idea of what blogging is really like. Blogging takes a lot of time and pre planning; it’s about forging a bond with readers and other bloggers and that means a lot of time spent sharing the love on social media. I wish I would have known this when I began this blog, back then my intentions were so pure… I just wanted to make food and share it!  Since then, I’ve realized that blogging is often a lonely job and connecting with others in person and through networking is important to have a successful blog, but also for my own sanity as well.

Regular readers may have noticed a bit of a lull in purely Dish ‘n’ the Kitchen food related posts recently. Truth be told I’m in a bit of a crazy time right now. I’ve had my head down and bum up for the majority of September, busily attending local events and doing a little food writing on the side. There’s football and regular visits to the Children’s Hospital in my family life. I love being involved, but as someone who doesn’t really manage her time that well…this ‘busyness’ has left little time for quiet moments of pure inspiration.

Inspiration. It’s another key to any happy blog ecosystem (in addition to connecting with others), for without it blogs can run the risk of becoming another site of recipe regurgitation, or the means to a different purpose other than what they were created for in the first place. I don’t mind developing recipe content for a product (and I actually loved the challenge of the recent Reese’s post I did), or talking about upcoming events (like Oktoberfest and Christmas in November) but when I haven’t been cooking and sharing in a while…I get itchy fingers! I get ants-y because I just want to cook.

So today I dropped all the projects on my ‘to do’ list and made doughnuts. 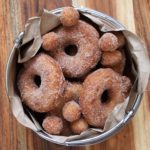 0.0 rating
Seriously the best idea anyone has ever had for a doughnut flavour.

Of course, sometimes first time recipes do not always work out perfectly. There are a number of reasons why these doughnuts were not really something I would usually put on the blog but I like the idea of them so much that I will revisit the idea of an Apple Cider Doughnut at a later date. I guess it’s also kind of funny when you think about what I mentioned earlier..these doughnuts look fabulous but they really aren’t. I think it’s important to be truthful to my readers rather than just offer pretty pictures of recipes that are crap!

Do you have a ‘no fail’ doughnut recipe that you can share?