It was never my intention to book our trip to NOLA during parade season but if you’ve ever been to NOLA you would know that pretty much anytime is parade season. Let me tell you, those people know how to party! As I mentioned in a previous post, this weekend also happened to be AllStar weekend so there were many interesting things going on which often involved huge crowds around huge men. We tried to avoid Canal Street as best we could, but we did end up having to go there to catch a streetcar and get a cord for my camera so that I could charge it. I was so mad I left the cord at home and had to use my phone for many pictures over the first couple of days.

This year, the Mardi Gras parade season started on February 15 with the Krewe de Vieux running a parade route around the French Quarter. The Krewe de Vieux is one of the more raunchy parades so I was a bit concerned with bringing the kids, but then again they are 15 and 13. Since it was the only parade we would be able to see I made up my mind that we really should go. The parade theme this year was ‘Where the Vile Things Are’ and of course there is a lot of local humour and sarcasm mixed in with these floats that an outsider may not understand. Being from Alberta I could not mistake the environmental sarcasm attached to many of the floats, especially the ones with oil rig decorations. There were also floats themed on ‘The Big Bong Theory’, The Winter O’limpdicks, Dick Dynasty (save our wetlands), and Obuma Care. It was all very festive and lots of fun. Here is one float I can show you. I’m not sure which sub krewe it was but this one had a motorized puppet guy twerking in front of an oil rig. 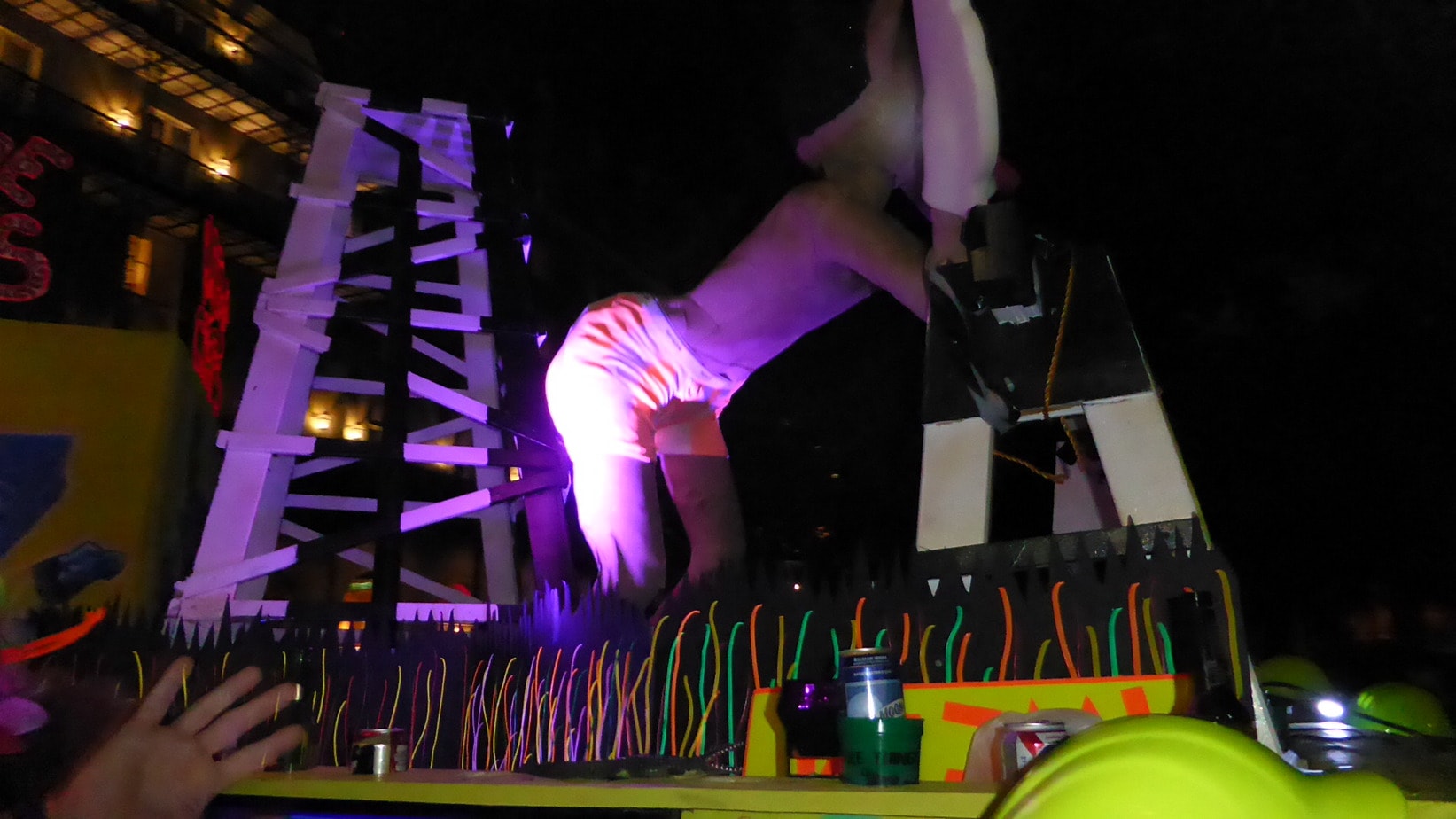 During parade season (and at anytime really) it’s not unusual to see people walking around in costumes of any sort. We saw this guy after the parade as we were waiting in line for our burgers at Yo Mama’s. I think he worked or knew the people at the Voodoo Shop. I’m gonna be honest, he scared the crap out of me. 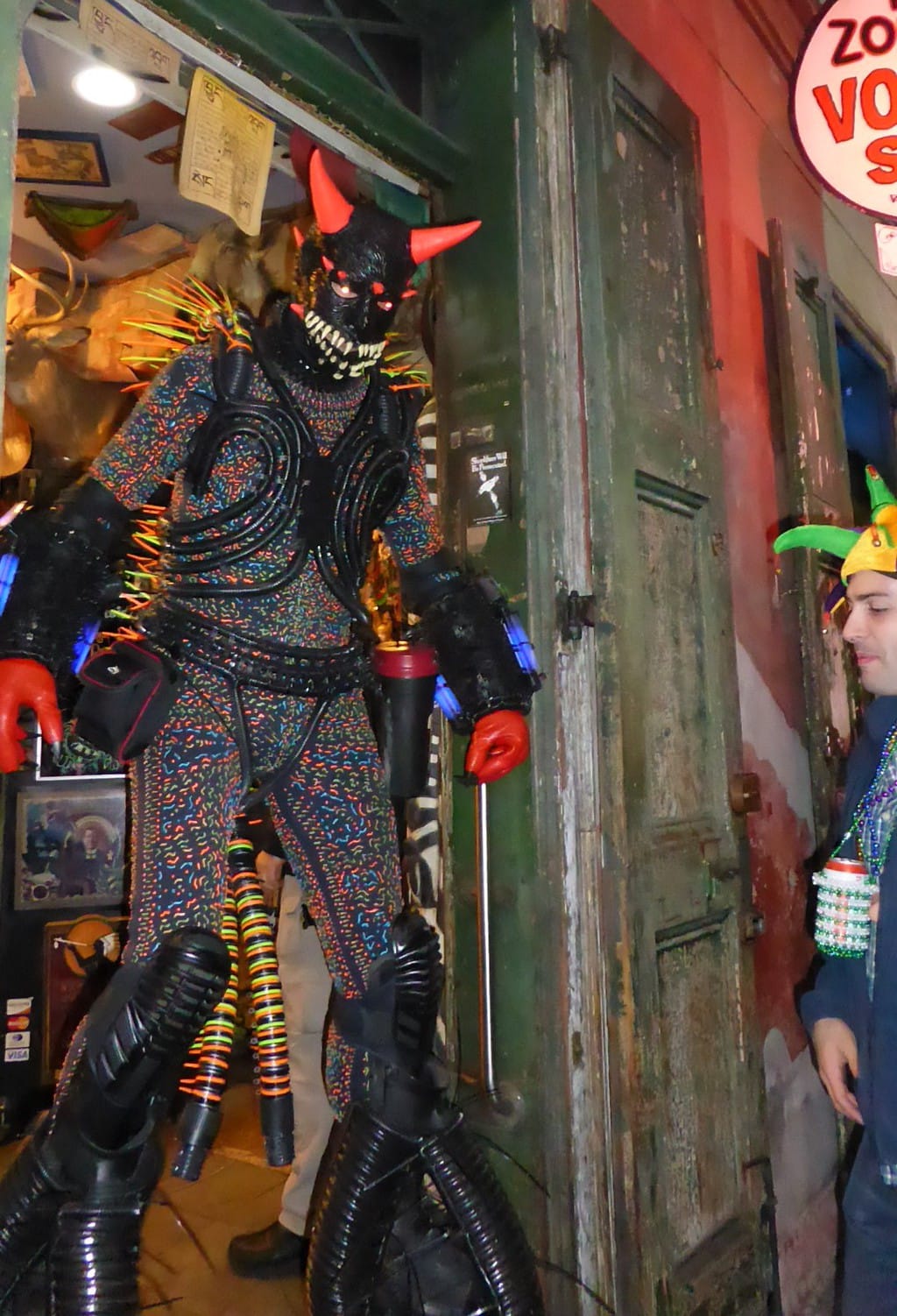 So anyway, he didn’t scare us away from Yo Mama’s. We had heard this was the place to get burgers and we were in it for the long haul. I’m really surprised Hubby was okay with waiting the hour it took to get a take away burger but then again there was lots of action and plenty of things to see. We had to wait outside because the kids couldn’t go inside. Not because there was booze there or because the bathroom walls were pornographic but because they had VLT’s. Too funny. Anyway, we had some great conversations with the bouncer who we later chatted up every time we passed by Yo Mama’s during our trip.

For those of you who don’t know my daugher, she’s super smart, has an ironic/sarcastic sense of humour (which she may or may not have gotten from me), is a super germophobe, and she’s pretty shy. She was getting jostled about by some guy outside the next bar and was getting really annoyed. I think he was too. Anyway he turned around to say something and realized she was a teen so he decided to teach her some NOLA street smarts. He told her not to be afraid of anybody because everyone is there to have a good time. Fair enough. But then to her horror he had her high five everyone who passed us on the side walk for about 15 minutes. I could tell she was a bit overwhelmed but I also thought it was a good lesson for her to learn, and a great opportunity for her to come out of her shell. Anyway, eventually we got our burgers and we practically ran to the hotel with them so we could eat them as hot as possible.

Bear with me here. These pictures are crap. We had LOTS of beer while waiting for them to be ready so the photos really won’t do the burgers any justice at all. Yo Mama’s is not a fancy place, in fact, it’s a dive bar but the beer is cheap and the burgers will change your life.

Kid One had a Bullfighter. A half pound of beef topped with avocado, fresh jalepenos, and salsa.  He liked it because it was super hot.

Kid Two had the Peanut Butter and Bacon Burger. For real and it was effing awesome. That’s my girl! 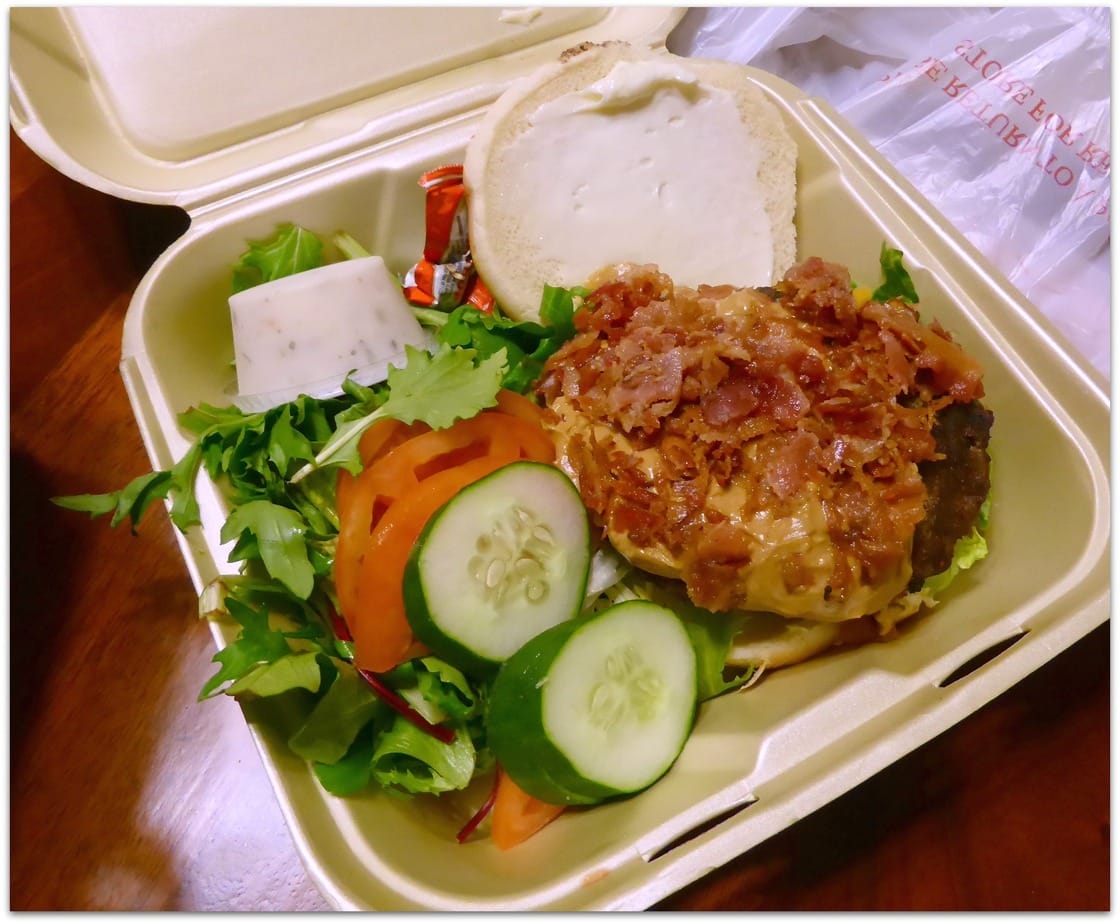 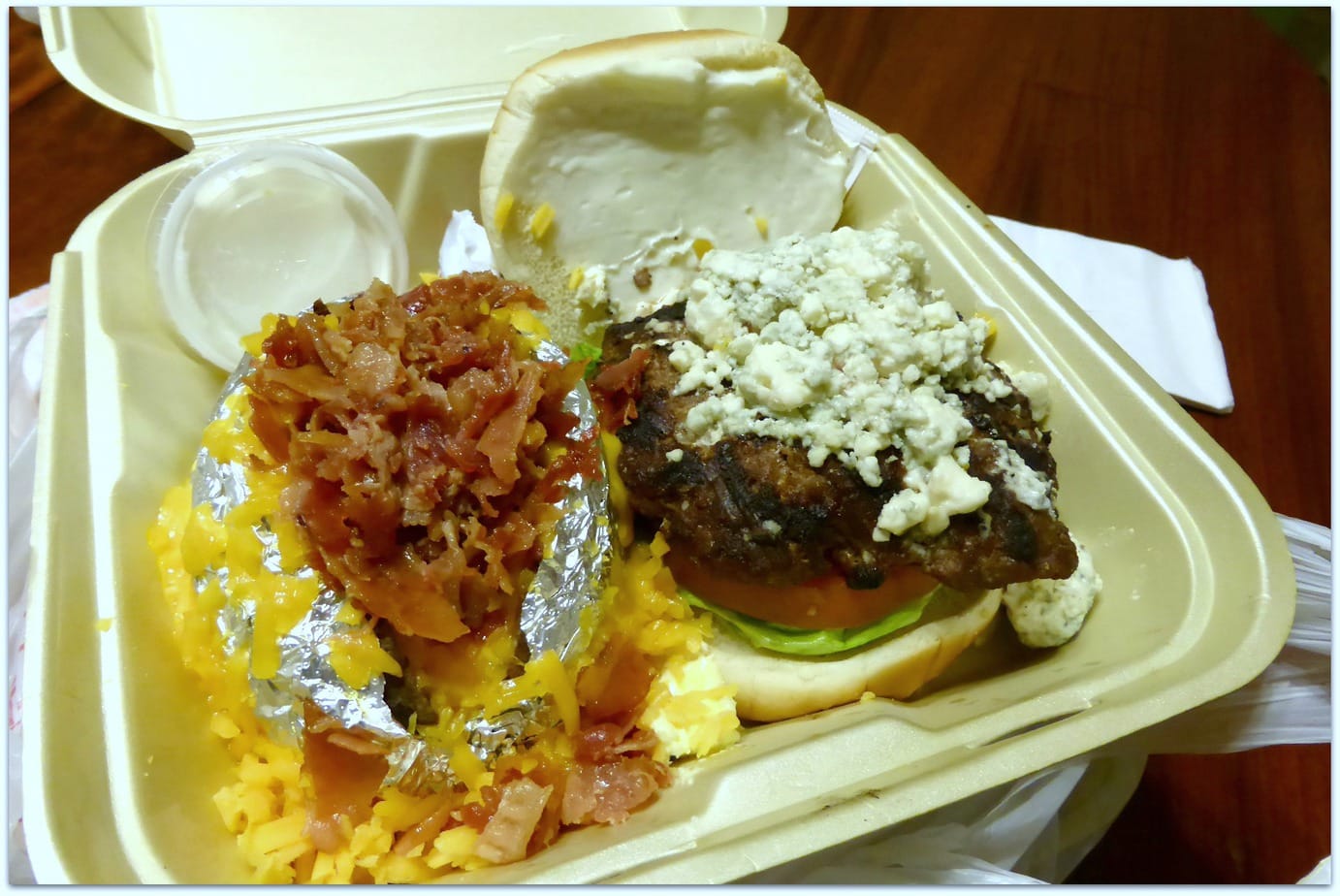 I was the boring one. Believe it or not I just had the Bacon Burger. So boring but soooo good! 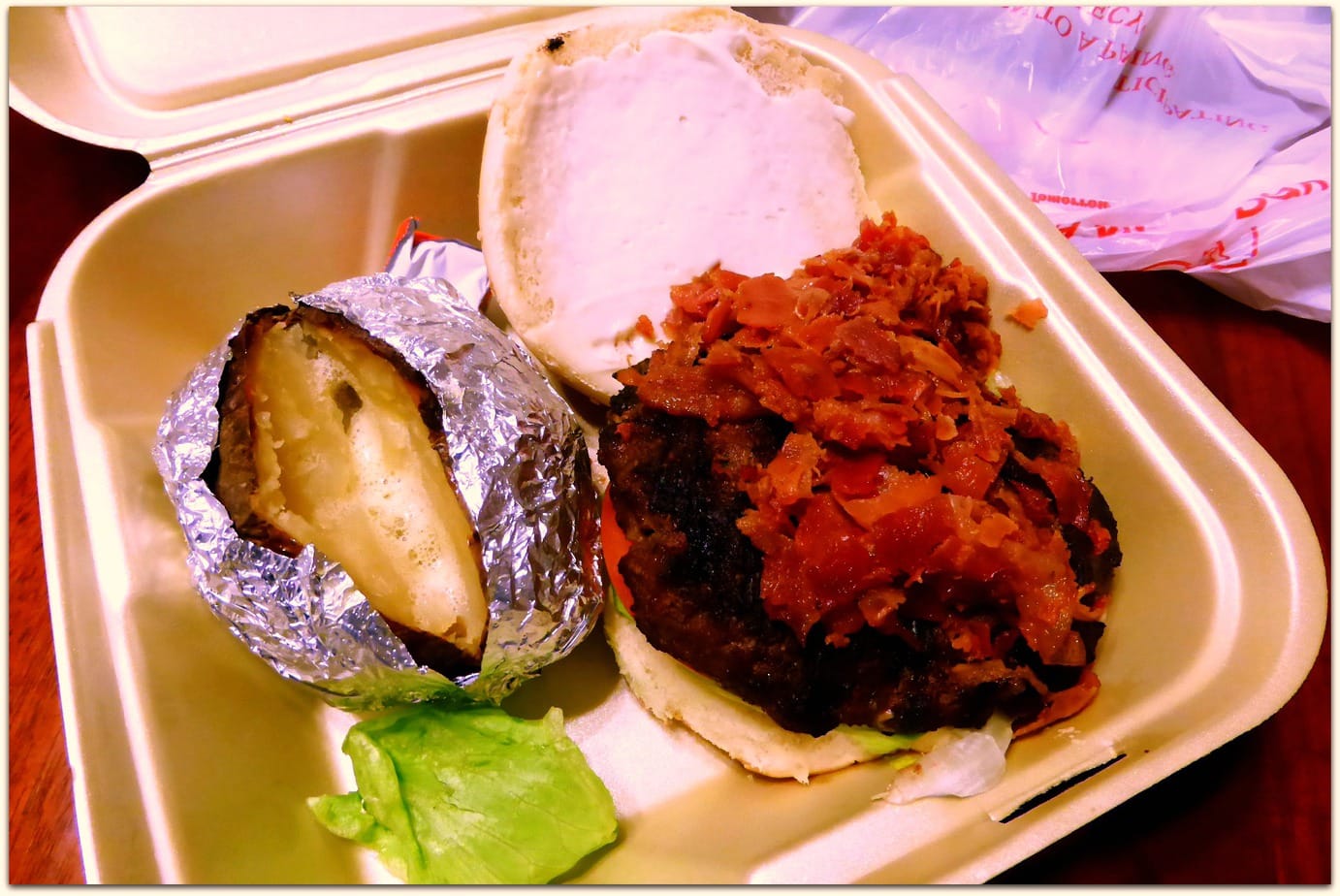 We loved our burgers so much we were okay with the fact that ALL of our sides were wrong. I had a plain baked potato while Hubby and Kid One got one fully loaded. Really? Who orders a plain baked potato? Kid two ended up with a salad so that was okay for her. We were all a bit disappointed though because we never got to try the potato salad or mac ‘n’ cheese sides that we had ordered.

It was definitely a night to remember.