After spending all day out in the swamps we were really happy to have a dinner reservation at Louisiana Bistro for that night. We strode into the restaurant with an air of familiarity, greeting our server with big smiles. We were definitely ready for some cocktails and very hungry. Of course we just had to have a re order of the amazing crab cakes from our previous visit but this time I also really wanted to try the Louisiana BBQ Shrimp as well. Wow, they sure looked a lot different than the ones I had made at home! 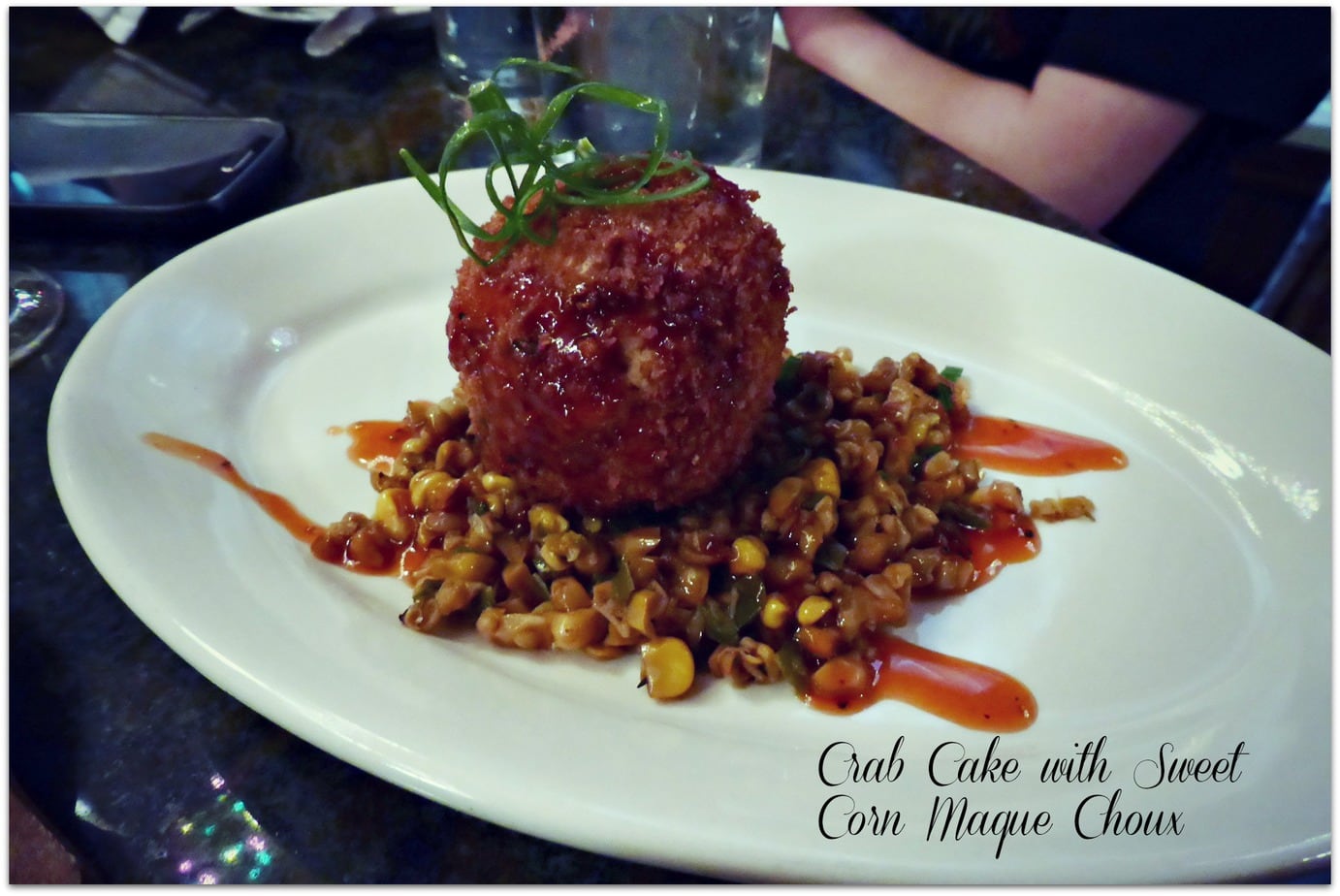 The BBQ sauce was really rich and glossy, full of butter and made with a very dark roux. The fluffy mashed potatoes were the perfect landing platform for the sauce. That sauce is so glossy you can see the reflection of the Mardi Gras lights in them in this photo. 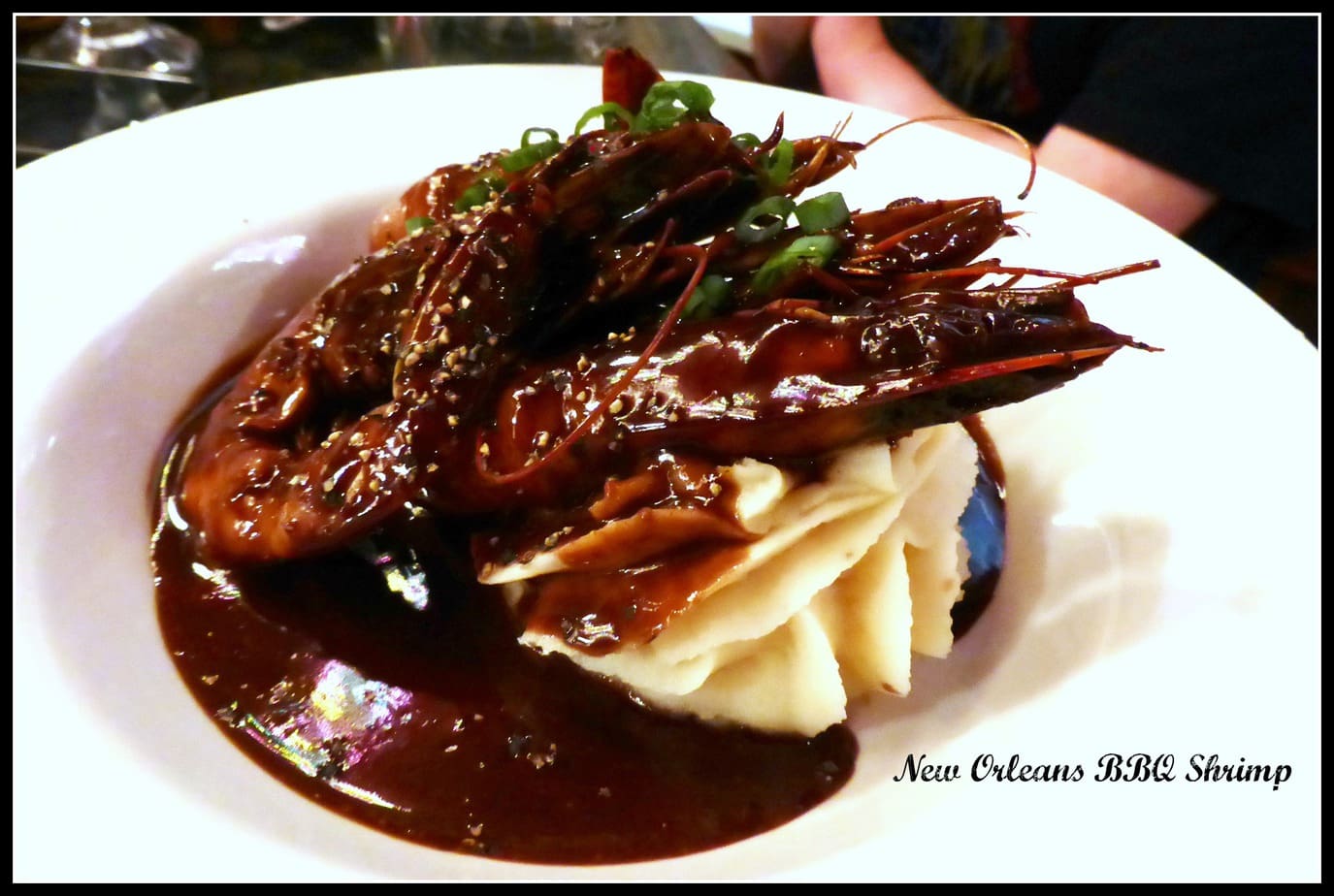 Kid number two ordered what I really wanted; the Crab and Asparagus Salad. She really enjoyed the battered asparagus which brought a bit more substance to the dish. The crab salad was delicious and really creamy. I’m wondering what is in the sour cream and cream cheese in Louisiana? Does anyone know? They sure taste different than what we have here. 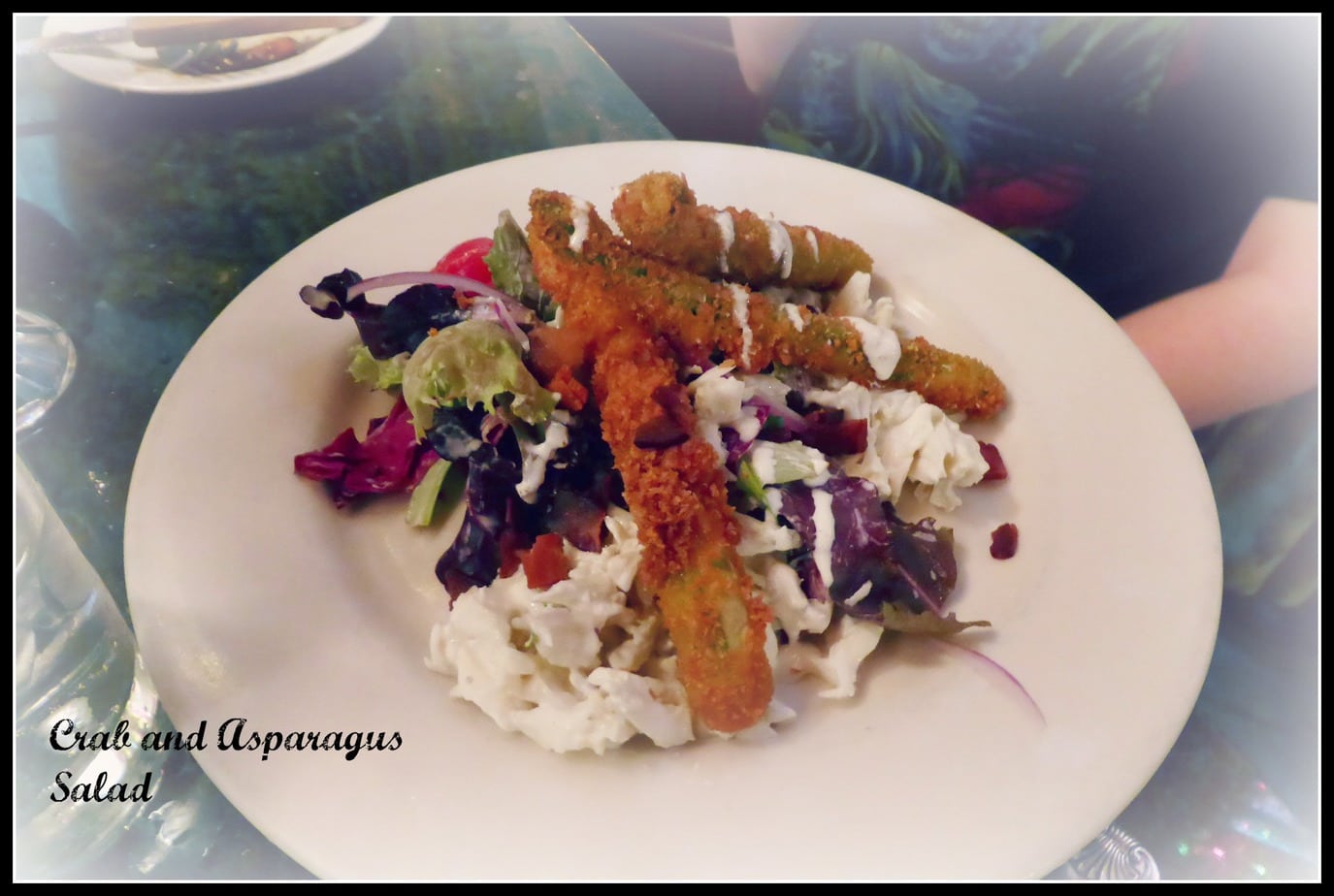 Kid number one went with the Lamb au Poivre which he really enjoyed. Especially those battered haricots verts. The server joked with him about them being the ‘healthiest junk food you can eat’. 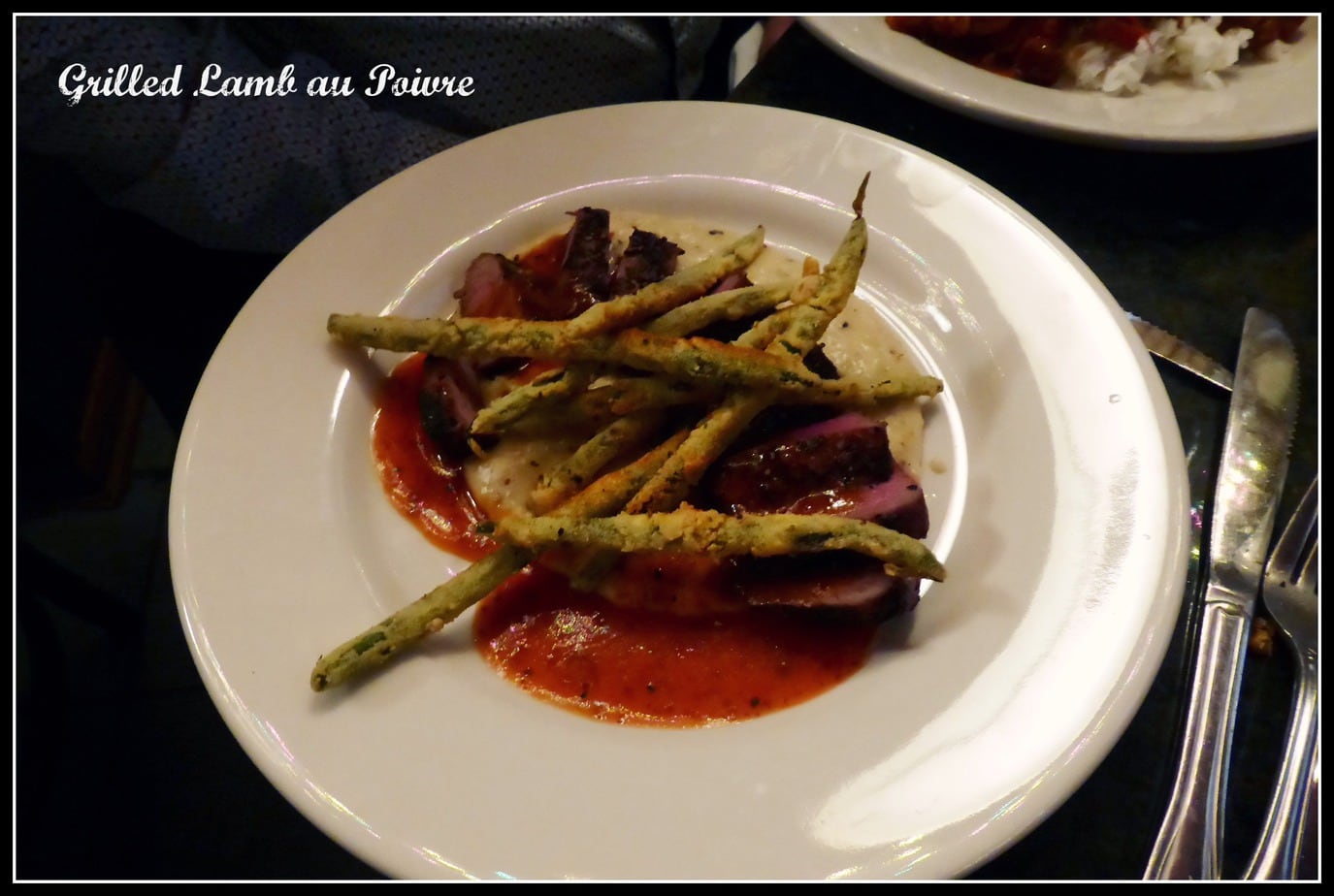 Hubby had the Louisiana Seafood Couvillion. He’s not very descriptive. He says there was prawns and crawfish and it was spicy with tomatoes and sausage. 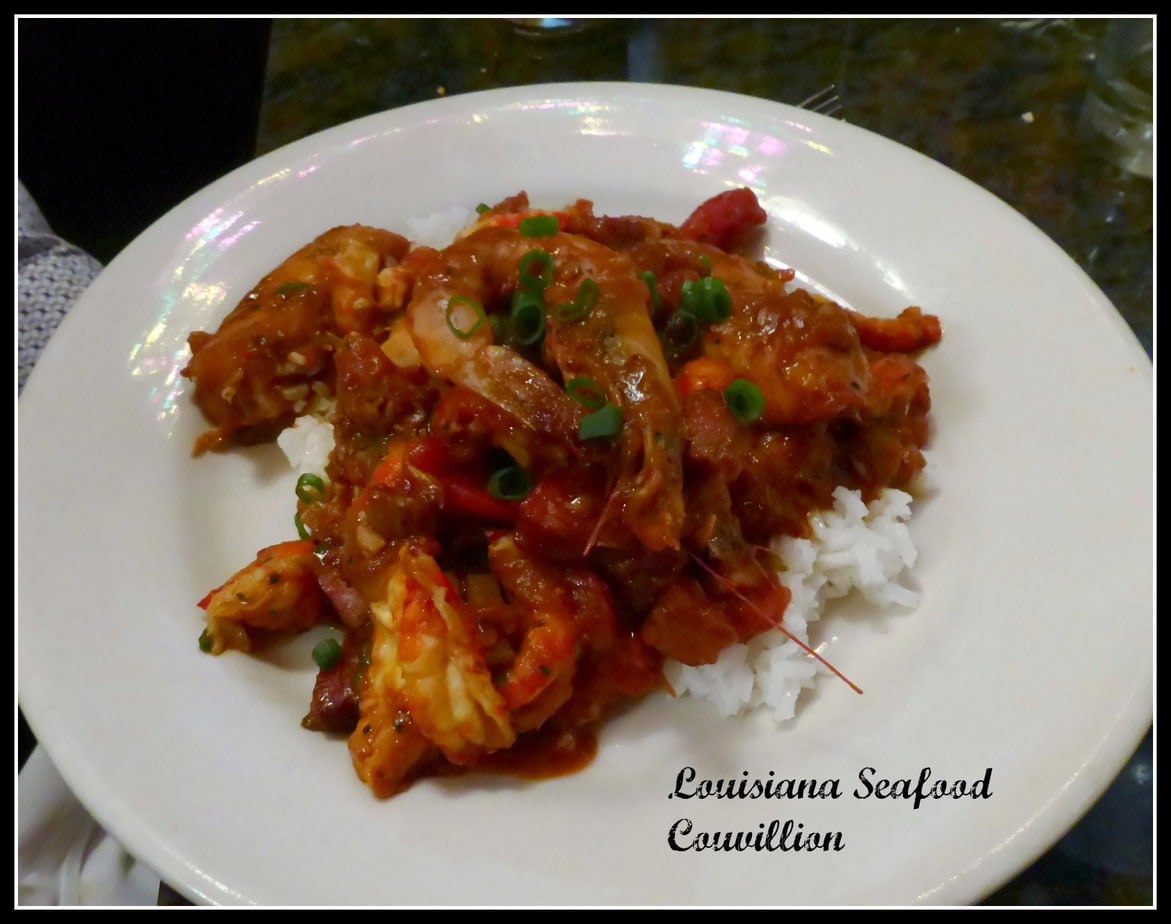 I almost went back on our ‘never order the same thing’ rule and ordered the Crab and Asparagus salad but I was keen to try the Puppy Drum caught locally from Lake Pontchartrain. Puppy Drum is a juvenile form of Black Drum but still measuring over the 16 inch limit. The fish was spectacular and very mild tasting. Having crab on top of that, mashed potatoes, and haricots verts made the dish even better. What blew my mind was the Beurre blanc sauce with capers.  I’m usually on the fence about capers…but this dish was a revelation. Butter, lemon, and capers combine to make heaven on a plate. 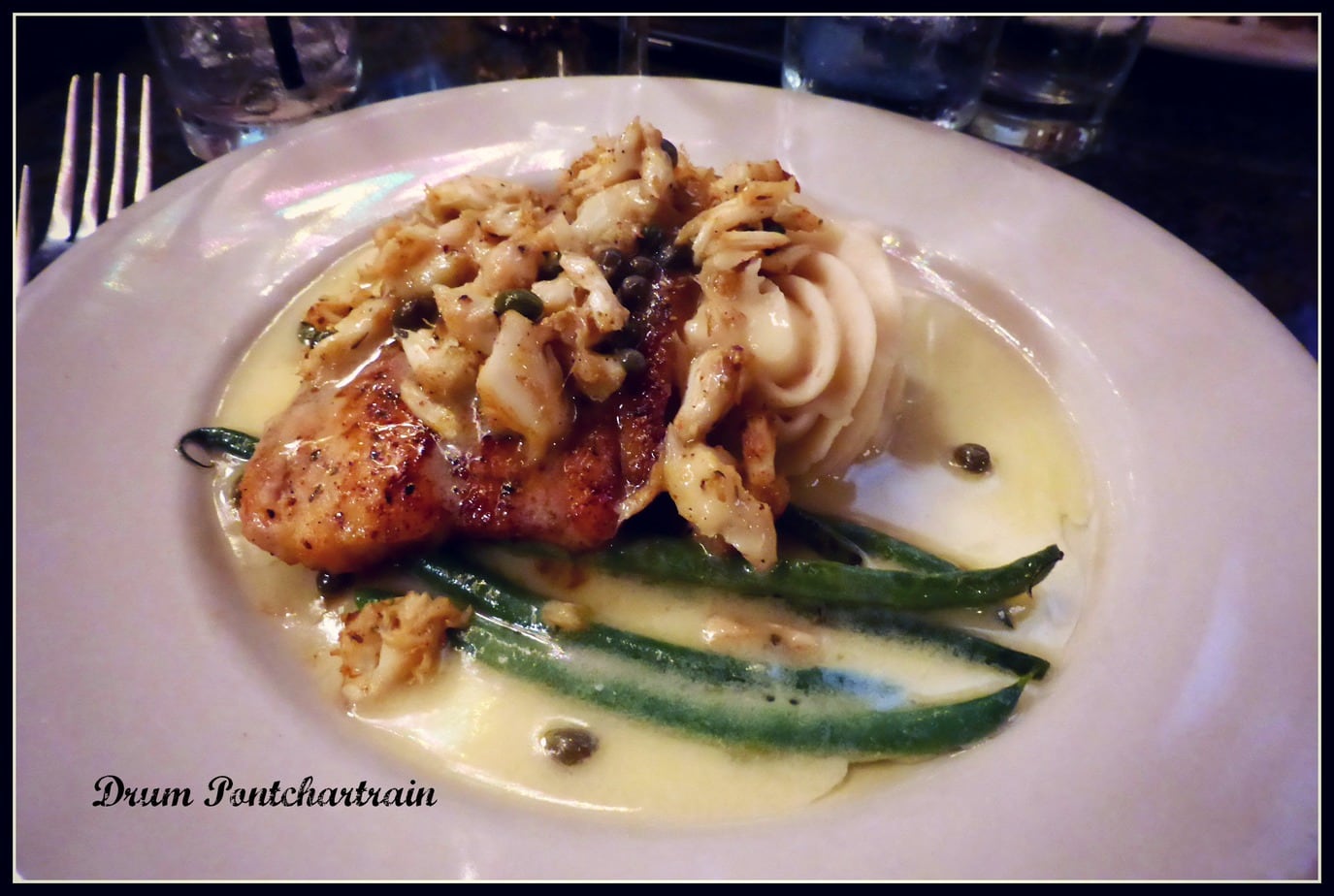 No dessert for us that night but the kids were itching for a night out in a jazz club. We still hadn’t hit one yet and there really aren’t too many that allow all ages so we ended up in line for the 9 pm show at Preservation Hall. We ended up sitting on the cushions in the front row, the kids in front of the trombone player and Hubby and I in front of the clarinet player.  Since both kids play trombone I could tell they were amazed and inspired by the very effervescent trombone player. The Preservation Hall Jazz Band was a very talented and lively bunch who really put on a great show. Lucky for them because I really did think $15 for 45 minutes was pretty steep. It was worth it though, keeping in mind that Preservation Hall is one of the few remaining places you can hear traditional New Orleans Jazz.