I grew up on a mixed farm in Saskatchewan with a ‘meat and potatoes’ kind of family. We raised and butchered our own beef for many years until our large herd of cattle became a smaller herd of bison. I’m not saying they magically turned, but eventually our family made the switch and it didn’t happen overnight. I remember the butchering days (I must have been around 10) when my job was to run pails of offcuts from the shop to the house and down the stairs to Grandpa. There I would watch him poke the meat through a large industrial grinder to make mince. The basement often smelled of the ground meat and sometimes spices if the ground meat was being made into sausage.  If it happened to be hunting season there was a more ‘wild’ smell in the basement air and I knew that some amazing meals were in our future. I’m pretty sure that kids these days (mine included) would become repulsed by the process of butchery but for me it was another job that was done on the farm. It was a necessity.

I think it’s sad that many people have no clue or don’t even care where their meat comes from. To be a responsible  and informed consumer today is a more difficult than in days gone by and most people don’t have the time. Picking up pre packaged meat at the grocery store is a lot easier than sourcing out meat that comes from a genuine farm where the animals are treated humanely. I’m generally not a ‘socks n sandals’ hippie sort of gal but I do believe that every animal has an ultimate purpose and that in the meantime, their lives should be as ‘close to farm living’ as possible. Realistically, I know mass production has evolved as a way to feed the world’s growing population so this kind of ‘pipe dream’ would seem to be impossible.  So what can one person do? For starters, we don’t eat beef everyday but maybe once or twice in about two weeks. I’ve been thinking maybe the same could be done in turn for each protein. A night for chicken, pork, lamb, fish, shellfish mixed with a night or two of vegetarian eating…would this be do able? Probably not but it’s worth a try.

What does all this meat talk have to do with potatoes you say? Well nothing really. It served as the first portion of ‘meat and potatoes’ theme that I have going. Our incredibly large garden on the farm always included many hills of potatoes. I remember Grandma saying she had planted over 200 hills in one year and that wasn’t even at the height of her gardening because she only had two ‘kids’ left at home by that point. There wasn’t a lot of variety, mainly just ‘whites’ or ‘reds’.  It does seem strange now that there wasn’t much variety encouraged since potatoes grew really well in our central Saskatchewan soil. All of the potatoes were dug up in the fall and placed in sacks and in the basement against the outer cement wall in the ‘canning’ room. On the ‘non butchering’ days Grandma’s basement smelled like dirt and laundry at the same time. Sometimes the potatoes ran out or became inedible before spring and we had to buy our potatoes from the store. That was always a big disappointment.

I don’t have much room for cattle or even much of a garden in my tiny Calgary backyard. If I want to buy locally and ethically raised proteins and local potatoes I go to the Farmer’s Market. Last week I saw some really beautiful looking bags of kipfler potatoes and picked up a bag to bring home. My original idea was to make a warm German potato salad, but my oldest ate the bacon I was saving for that purpose. So, I remembered the duck fat I had purchased from The Better Butcher here in Calgary. I was finally faced with an opportunity to use some of it to roast these potatoes. I started by boiling the potatoes whole for about 10 minutes until they were just cooked through. Then I melted a tablespoon of duck fat with a tablespoon of butter. I minced a garlic clove and some fresh rosemary and added them to the fats. When the potatoes were done boiling, I cut them in half lengthwise and put them in a baking dish. I then covered them with the fat mixture and roasted them in the oven until some bits were golden. At the end, I finished them with some sel gris. I think they ended up being tastier than the salmon! 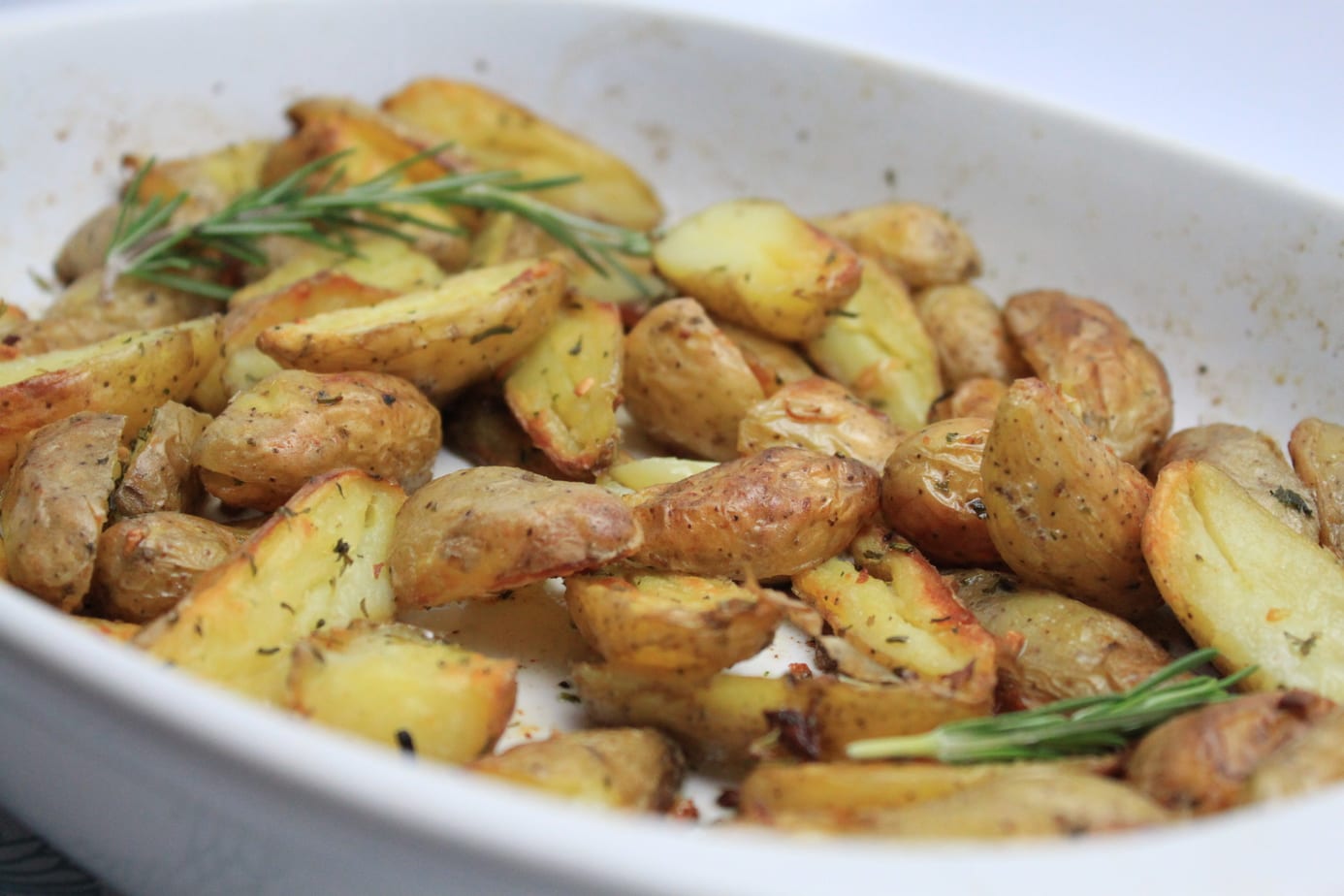